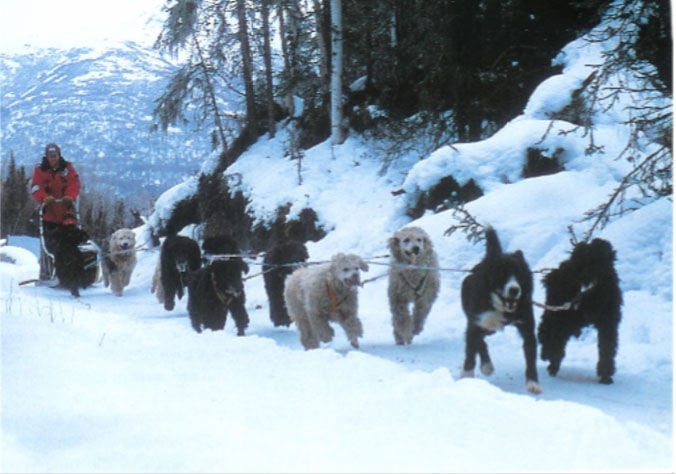 Alaska transplant John Suter and his racing poodles. When Suter saw a miniature poodle eagerly running to keep up with his snowmobile, an improbable thought occurred to him: Now there’s a sled dog. Courtesy of John Suter. 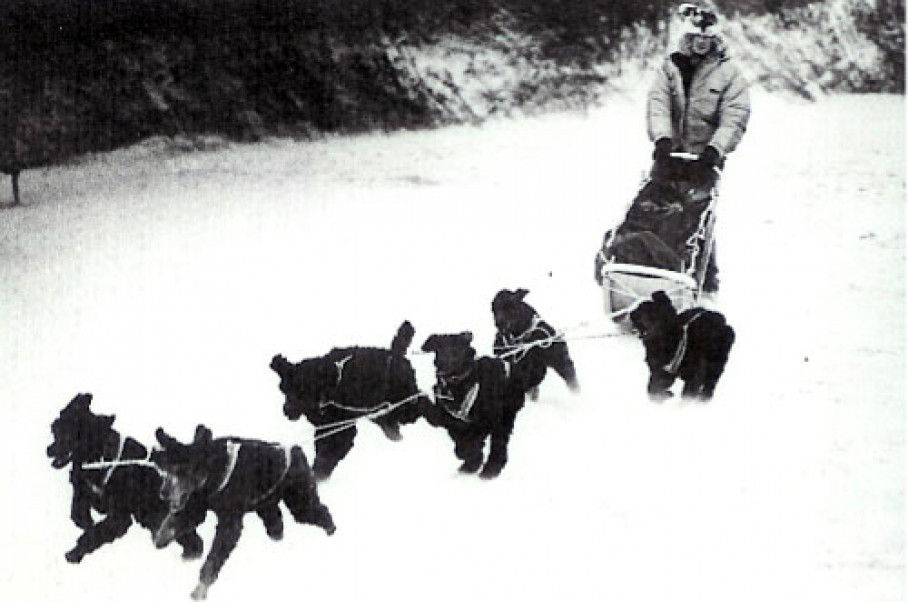 John Suter with a team of standard poodles, when he first started racing the breed in the mid-1970s. Courtesy of John Suter. 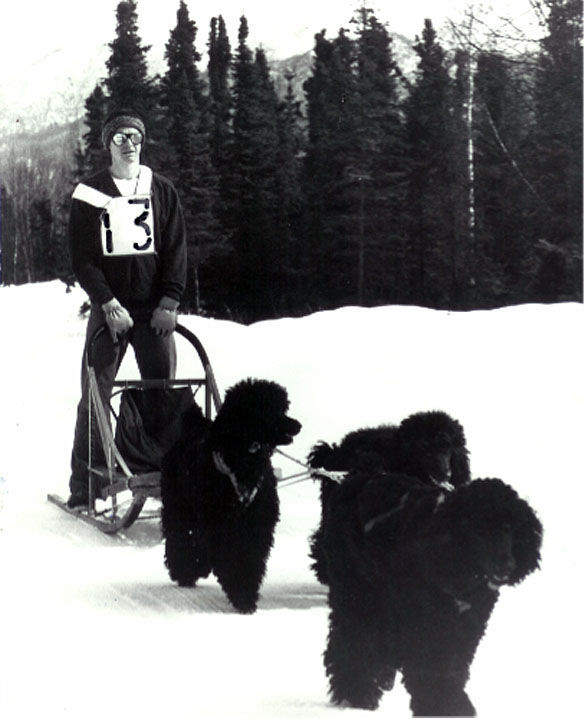 Musher John Suter with his team of poodles circa 1975 in Alaska. Suter was the first to use poodles in the Iditarod.  Courtesy of John Suter.

Alaska transplant John Suter and his racing poodles. When Suter saw a miniature poodle eagerly running to keep up with his snowmobile, an improbable thought occurred to him: Now there’s a sled dog. Courtesy of John Suter.

John Suter with a team of standard poodles, when he first started racing the breed in the mid-1970s. Courtesy of John Suter.

Musher John Suter with his team of poodles circa 1975 in Alaska. Suter was the first to use poodles in the Iditarod.  Courtesy of John Suter.

Maybe it was his California upbringing. Perhaps it was his bent for seeing a joke in just about anything. For whatever reason, when Alaska transplant John Suter saw a miniature poodle eagerly running to keep up with his snowmobile, an improbable thought occurred to him: Now there's a sled dog.

It was the 1970s, and the military duty that had brought Suter to Alaska, where he was a member of an Army biathlon team, was over. The poodle idea gripped him. Soon, he was back in California, buying standard poodles - the big ones, because even Suter wasn't quixotic enough to use miniatures - and transporting them north to build a dog-sledding team.

"No one ever did poodles before," Suter, 66, said in an interview this week from his home in Chugiak, Alaska. "I thought maybe we could get something going."

He did. By 1991, Suter had raced poofy poodles in hundreds of dog-sledding competitions, appeared on "The Tonight Show" with Johnny Carson -- and four times completed the Iditarod with part-poodle teams. They didn't do half badly, finishing in the lower middle of the pack and earning an eternal spot in Iditarod trivia books.

But, Suter said, mushing with poodles was "far more difficult than I anticipated." And 25 years later, no one's tried it again, in part because the punishing, 1,100-mile race rules now stipulate that "only dogs suitable for arctic travel" are permitted, and that's generally believed to exclude poodles.

On Tuesday, musher Dallas Seavey won this year's Iditarod for the fourth time, using the husky-types that have ruled the epic adventure since its start in 1973.

Even today, however, Suter thinks he was onto something that might someday have led to a poodle victory: He'd raise the poodle puppies alongside huskies, and the poodles "copied them," he said. Several generations of dogs in -- about 80 black, white and brown poodles -- he said he saw the dogs picking up a husky-like drive to dash through the snow, while retaining their poodle essence.

"If you fall off the sled, the huskies will keep running down the trail," said Suter, who's a stevedore at the port in Anchorage. "The poodles will turn around to see if you're there and do a U-turn and come pick you up."

Poodles and dog-sledding is not necessarily as ridiculous a combination as it might sound. Although it classifies standard poodles as "non-sporting" dogs, the American Kennel Club says they're "enthusiastic walkers, runners and swimmers." But they're also athletic retrievers and and hunting dogs, and their thick coat provides ample protection from water when not trimmed into circus-style orbs.

On Suter's team, they needed that coat. The Iditarod often passes through blizzards and subzero temperatures (conditions that, among other things, cause animal rights groups to say the slog amounts to dog abuse). Suter's poodles' fur was so thick that Alaskan village kids would ask him if the dogs were sheep, he said. Sometimes he had to spray their paws with Pam to keep ice from sticking.

By 1998, he and his poodles had done hundreds of races - including a 500-miler in Minnesota that was chronicled by Sports Illustrated - and Suter entered the Iditarod.

At that time, American Susan Butcher was a top musher, and the magazine noted that Suter had inspired a new saying in dog-sledding circles: Women win the Iditarod and men mush poodles. Suter said he didn't mind; he still tells jokes that refer to him as the "Idita-idiot."

Umiat, a black poodle, led Suter's team of three poodles and six huskies across the finish line after 18 days, 1 hour and 50 mins -- a full week behind the winner, but a finish nonetheless. The Washington Post editorial board praised Suter at the time for elevating the image of dogs that "don't choose to be trimmed to look like ornamental shrubbery" and inspiring other breeds "that never thought they could run with the huskies."

Suter and Umiat, her ears adorned with red ribbons, appeared that year on Johnny Carson, where Suter said he had wanted to "erase the sissy name that's on the poodle."

Suter's best Iditarod finish came the next year: 14 days and 22 hours, or about 6 days longer than Seavey's finish this year. By 1991, the poodles had taken first place in several smaller races. But Suter had taken out a second mortgage, liquidated his retirement funds and run up his credit card to fund his sport, and he'd won a total of $2,000 in Iditarod prize money over four years.

"What it comes down to is, you have to be successful and you have to get sponsored or you end up drying up all your money and you can't even pay the entry fee," to the Iditarod, Suter said. Today that fee is $3,000.

He gave up, retired the dogs, and eventually they "finally went to Jesus," he said.

Today, Suter joked, only "old-timers without Alzheimer's" in Alaska remember his exploits. But he's got a legacy: His daughter is a competitive musher -- of huskies. And in 2010, a California woman wrote a children's book inspired by his story. It's called "Sled Dog Poodles."

Suter said he still goes to the Iditarod start in Anchorage each year. "If you enjoy freezing cold and blowing snow," he said, he highly recommends it.

"It's just a great adventure, you know? And when you're actually on a sled doing it, it's the endless trail," Suter said. "To go that far by foot power!"