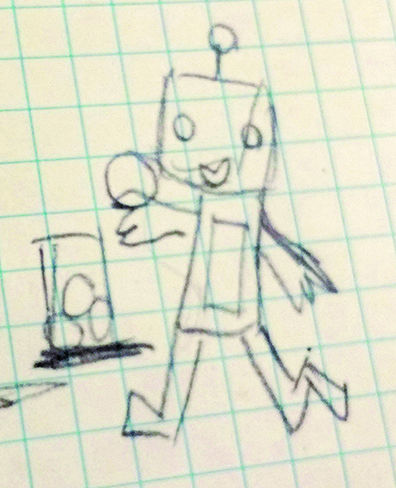 One of the sketches by girls robotics team from the Effie Kokrine Early College Charter School.

One of the sketches by girls robotics team from the Effie Kokrine Early College Charter School.

FAIRBANKS — The basement laboratory looked like a playroom for robots and teens.

“We’ve taken off more parts than we put on,” said Nathan Sanches, 14, a freshman at Lathrop High School.

The lab is part of a University of Alaska Fairbanks science outreach program funded by the NASA Near Earth Network. The program is in its fifth year, said Jeremy Nicoll, the principal investigator on the project. It is meant to introduce and supplement science, technology, engineering and math education to Fairbanks junior high and high school students.

Robotics is a great way to teach younger students science, Nicoll said. If someone is thinking of a science career, it’s best to take as many science and math courses as possible before college. For students who go to smaller schools, such as the Effie Kokrine Early College Charter School, the science outreach program offers the opportunity for such classes.

“For some students, their first exposure to real science is in college,” Nicoll said. “We need to spark interest before that.”

One of NASA’s goals is to inspire the next generation of scientists, technologists, engineers and astronauts. NASA has funded projects with UAF through the Alaska Satellite Facility at the UAF Geophysical Institute. Several years ago, NASA asked ASF to apply for a grant to conduct the robotics program, Nicoll said.

It’s a five-pronged project: Hold a NASA careers panel at UAF, have an ASF internship for UAF students, hold a high school science class, have a science and robotics club and partner with other existing UAF outreach projects.

The robotics lab is new and is available to all Fairbanks 7-12th graders. It is located in the lower floor of the West Ridge Research Building on the UAF campus. One wall is lined with bins loaded with tools and robot parts. At one end of the room is a robot arena where students test their creations. Desks for two lab monitors are at the other end. Long tables and chairs are in between.

The robotics lab isn’t just for students to be creative and learn science. It’s to prepare them to compete with their robots. Every year a nonprofit company called FIRST Tech Challenge holds a competition for such students.

This year the challenge is called Cascade Challenge. The team must build a robot that can fit inside an 18-inch cube, but it may expand after the competition starts. The goal is to release 160 plastic balls in two sizes from a container in the arena, then gather and toss them into three moveable cylinders ranging in height. The robot must perform other tasks, as well.

On a recent Friday, three girls from Effie Kokrine hunched over graph paper penciling out designs for their robot. One of the things they have to consider is how to get the different sized balls into the cylinders.

It’s a challenge worth rising up to, the girls said.

“I like being able to think logically,” said Briana Kremer, 14, a freshman at the Effie Kokrine school.

At another table, boys were testing expanding robot arms.

“OK, I’m not going to do that,” said Jasper Holton, 15, a sophomore from West Valley High School. This is his second year with the competition.

Wendy Camber, Holton’s mother, said her son’s problem solving skills have expanded since he’s been involved in the club. Another plus is Holton has access to a high-tech lab, not only for robotics but other facilities at UAF Geophysical Institute.

“It gives him an introduction to the GI and scientific research at UAF,” she said. “A lot of UAF people participate and make themselves available.”

The FIRST Tech Challenge encourages collaboration with others, something they call “gracious professionalism.” Nicoll likes to see the seasoned robotics veterans help out the rookies and sometimes vice versa. They also work with other Fairbanks robotics teams.

“It raises the wholgrouto a higher level of competition,” he said.

Last year Nathan explained how he attached and removed an expandable arm six times because it was slightly off kilter.

“No, engineer,” she replied.

Diana Campbell works at the UAF Geophysical Institute public relations office. She may be reached at 474-5229 or dlcampbell@alaska.edu