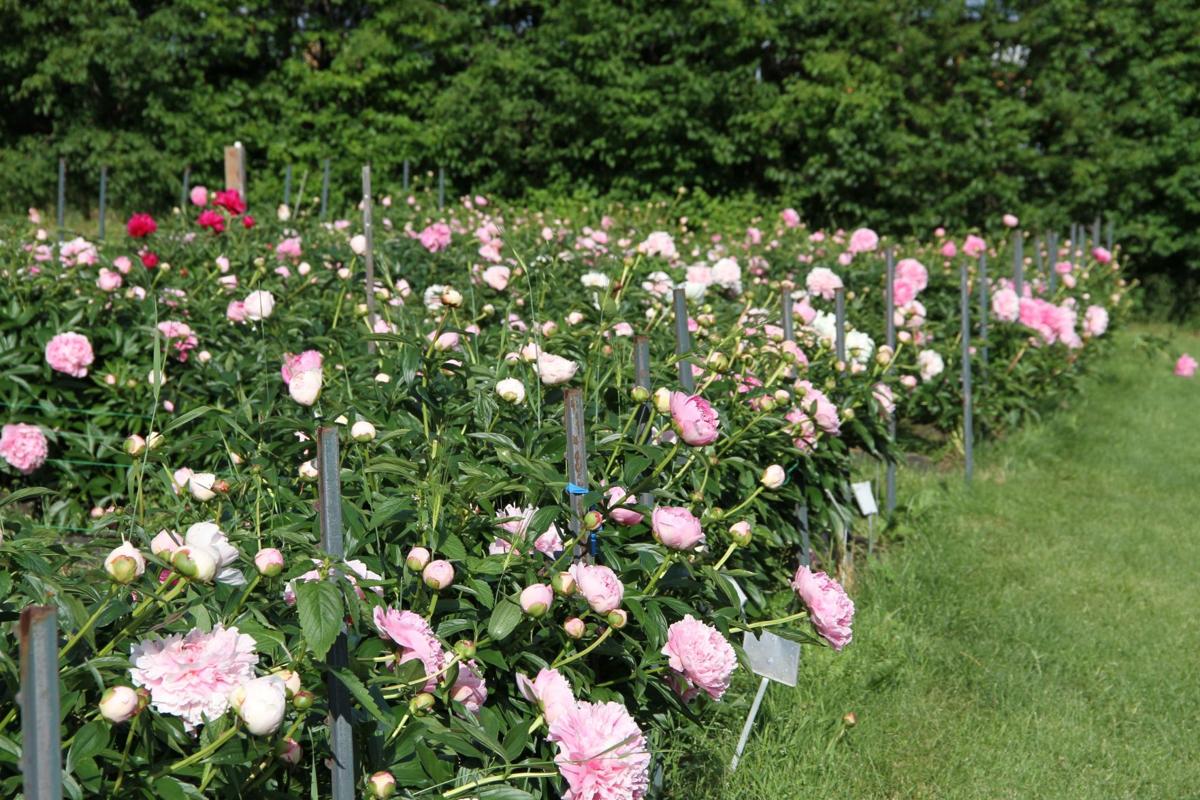 The plots at the UAF Georgeson Botanical Garden continue to delight visitors. 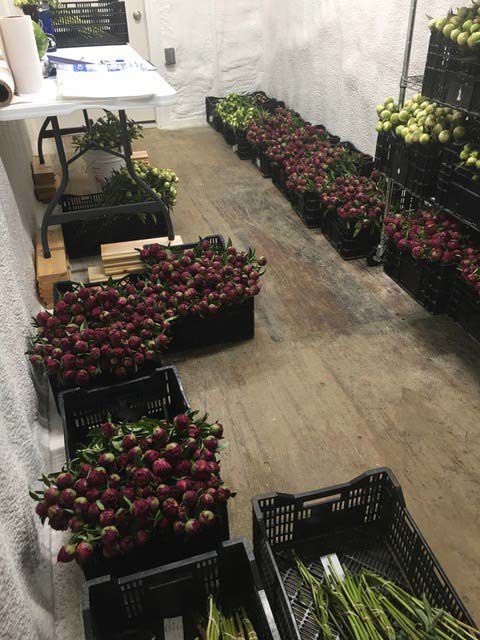 These stems are being chilled and ready to be sold and shipped. 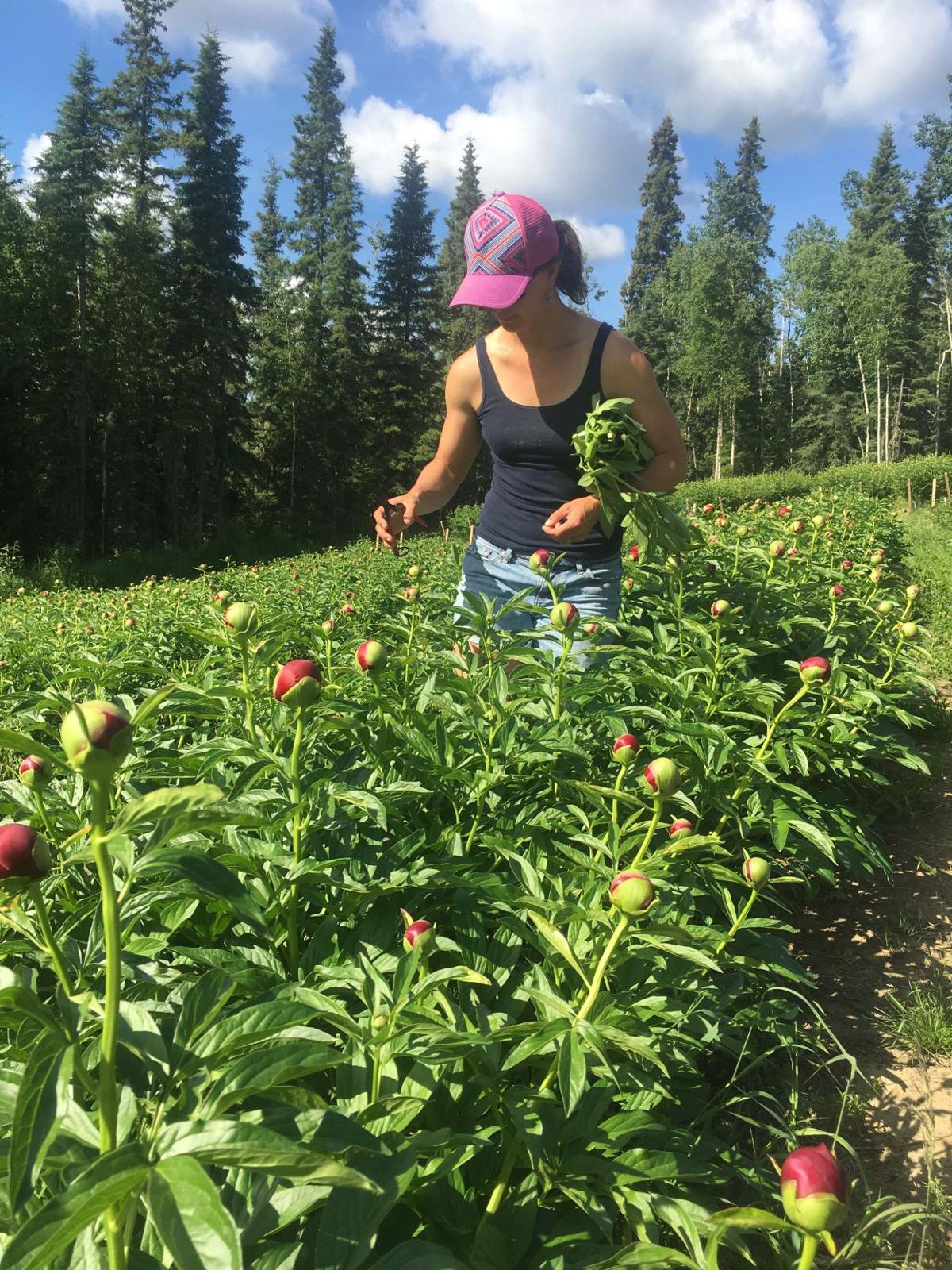 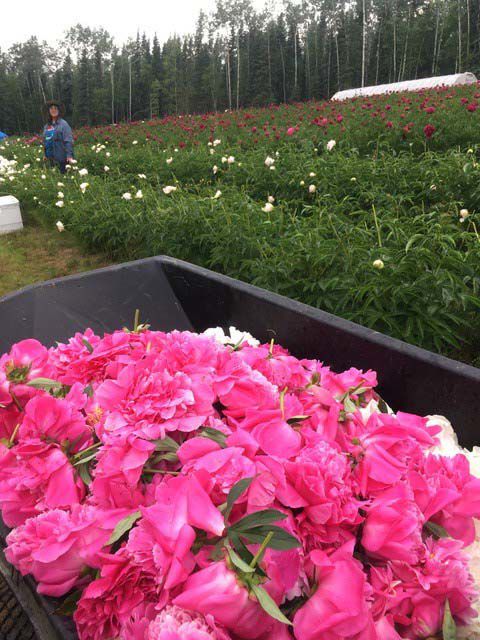 On each plant, numerous buds are cut and discarded for its health and future productivity. These buds are destined for the ditch. Most farmers don’t compost their peony buds and foliage because of fear of disease.

The plots at the UAF Georgeson Botanical Garden continue to delight visitors.

These stems are being chilled and ready to be sold and shipped.

On each plant, numerous buds are cut and discarded for its health and future productivity. These buds are destined for the ditch. Most farmers don’t compost their peony buds and foliage because of fear of disease.

In the last decade, peony farms in Alaska have increased tenfold. According to the latest Census of Agriculture, there were 100 peony farms in the state.

The growth has been propelled by headlines like these: “Alaska’s peonies are the state’s new cash crop,” “‘The industry’s about to explode’: Peony market flourishes in Alaska” and “How Alaska became a center of peony cultivation.” Credit for the boom also goes to UAF Professor Pat Holloway, who, 20 years ago, made it known that, because Alaska peonies bloomed at a time when they weren’t available anywhere else in the world — during the height of the wedding season — they could garner premium prices.

Notwithstanding the ebullient headlines, are Alaska’s peony farmers flourishing? Are they making money? That’s what I wanted to find out when I interviewed more than a dozen farmers in the Interior.

David Russell, president of the Alaska Peony Growers Association, likens peony farming to a video game. The first level is growing marketable peonies; the second, chilling and post-harvest handling; and the third, marketing. Each level presents new challenges and unknowns. If you successfully reach the third level, you must continue juggling all of the challenges of the first and second levels as well.

A few farmers I interviewed did not make it past the first level — growing marketable peonies. Mike Quinn, a small peony grower (300 roots) ran into problems with the variety he planted. He explained that there are very strict parameters of what the industry will buy and sell. “I bought a variety that grew well but it didn’t produce a thick enough stem,” he said. "The only place I can sell them is the farmers market.”

He said he would have continued to expand if he could have gotten $2 or $3 a stem. On the other hand, he said even if it was paying some money, he’s not sure it’s how he wants to spend his retirement. The peonies needed to be harvested at the same time he likes to fish for king salmon.

Even those who, due to a combination of luck and fastidiousness, create optimal growing conditions for the plants, still have no control over when the peonies bloom. Fairbanks growers are finding the late summer niche unreliable. In fact, in 2019, it disappeared.

Ron Illingworth (13,000 roots), one of the first peony farmers in the state and a vocal champion for the industry, said farmers in Fairbanks finished harvesting by July 2 last year. This was before the upper Midwest stopped harvesting. It’s news to no one that the vagaries of weather make farming difficult, but in The Atlantic, UAF Assistant Professor Nancy Fresco explained that warming trends might make the niche a thing of the past (bit.ly/2tYggL1).

The second level of the metaphorical peony farming videogame is post-harvest handling and chilling. While the Dutch may not be harvesting peonies in mid- or late-summer, they’ve mastered the techniques of chilling them longer, allowing them to tap into Alaska’s so-called exclusive niche. Plus, their farms are paragons of efficiency (bit.ly/3aNa9K4) so they can sell their stems profitably at prices far below Alaska farmers.

Carolyn Chapin, one of the first peony farmers in Alaska, explained, “Originally, it (the late summer niche) was there. We were selling to high-end markets to meet summer demands. When we first started shipping in 2004, the Dutch were done right after Mother’s Day. … With a very strong summer demand, the Dutch are pushing further into it by storing their stems much longer than previously, and they are expanding peony production. … The niche markets are still there but they’re harder to come by.” Even though their flowers may not be as fresh, big, or even open, if businesses or brides are looking at the bottom line, they often opt for the cheaper option.

The third level and, by most accounts, the least fun part of the difficult game of peony farming is selling the peonies. The Arctic Alaska Peony Cooperative in Fairbanks was supposed to relieve farmers of this chore, but this fall it disbanded. For a couple years, Chapin operated a packhouse, marketing for 14 peony farms in Fairbanks, but she cut back to three farms because she wasn’t making enough money for the amount of work involved. If growers are lucky enough to have a packhouse or coop to work with, they must fork over 20 to 60% of gross sales.

And it’s not just selling all of the stem, it’s selling them at a profitable price. There’s an often-repeated story about a buyer in London who wanted to buy 100,000 peonies every week of the summer from the UAF Georgeson Botanical Garden, which at the time, only produced a handful of stems. What isn’t always mentioned is that the buyer only wanted to pay 50 cents per stem. By conflating high, wholesale demand with high retail prices ($4, $5, $6 or more), it’s been easy to imagine making bank as a peony farmer.

With an unreliable niche and no co-op, can Fairbanks peony growers make money? None of the farmers I talked to were, even those who’d been at it more than a decade. Most were covering their annual costs (including hired labor but not their own time).

Chapin, who used to teach the growers school for the annual Alaska Peony Conference, said, “Jan and I have always said plan on $2 a stem. Some people are planning around $5 a stem. Some don’t care so they’re selling for $2.10. Once wholesalers get it at that price, then they won’t pay more.” That’s where the co-op came in. They were supposed to ensure everyone got a fair, high price, while maintaining quality and providing access to some of the larger export markets. The final payout from the Arctic Alaska Peony Cooperative was less than a dollar a stem.

Kim Herning (5,000 roots), helped market for the Arctic Alaska Peony Cooperative  and also served on its board.

She said, “I've always felt my hands were tied because I was associated with AAPC and coming down from the president, everything had to be positive. But that's not realistic. That's not really a good gauge of how the industry is doing. If you are putting everything in a positive light, that's not really fair to people jumping into it.” Herning said, “Had we known those things, we would have done things differently or maybe we wouldn't have done it at all. It's not fair to new farmers. If someone is really seriously thinking about starting a farm. They need as much information as they can get.”

Naomi Brodersen (1,400 roots) has farmed with her family since 2014. Looking back, Brodersen said, “I wish we would have had a more realistic picture of what the peony industry would be. Everyone had an idealistic view of what the prices would be and how many stems per plant you would get. ... We thought all we would have to do was the growing. ... Overall it’s turned out to be a whole lot more work than what we expected and having to do all the different aspects and the prices are much lower than what we hoped for.”

Although the peony industry has grown and continues to grow thanks to the efforts of passionate, hard-working individuals and state and federal money, it does not portend to the success of individual growers. In the absence of a cooperative marketing or selling entity, the growth could be its detriment. A larger industry means more competition, especially at a local level. Those dabbling in peony growing pose a risk to the reputation of Alaska-grown peonies if they sell substandard buds or undercut other growers. As an aside, the support industry (suppliers, service providers, researchers and educators) has benefited from the growth of the industry, particularly through grant funding.

I wish it wasn’t so, but as with any type of farming, it’s hard for small farmers to compete with agriculture juggernauts. This is particularly true for small farms in Alaska. Lacking a solid niche, that’s what small Alaska peony farmers are doing. More discussion and research should be done on what kind of peony farm is most likely to be profitable in Alaska, including size, location, and marketing strategy. The come one, come all mentality has afforded the industry a welcoming and cooperative vibe, but it may be time to acknowledge that growing peonies in Alaska is a serious undertaking, which may not be profitable on a small- or even medium-scale.

Pros and cons of a larger industry aside, potential growers should not be seduced into starting a peony farm for the good of the whole by sugarcoating the risk-reward ratio. As Kim Herning puts it, they should have full access to the “good, bad, and the ugly.”

For a more in-depth article, go to www.uaf.edu/afes and stay tuned for a follow-up article.

Heidi Rader is a tribes Extension educator for the University of Alaska Fairbanks Cooperative Extension Service and the Tanana Chiefs Conference. She can be reached at 907-452-8251, Ext. 3477 or hbrader@alaska.edu.

Correction: Kim Herning did marketing for the Arctic Alaska Peony Cooperative  and also served on its board. Earlier versions of the story cited an incorrect organization.