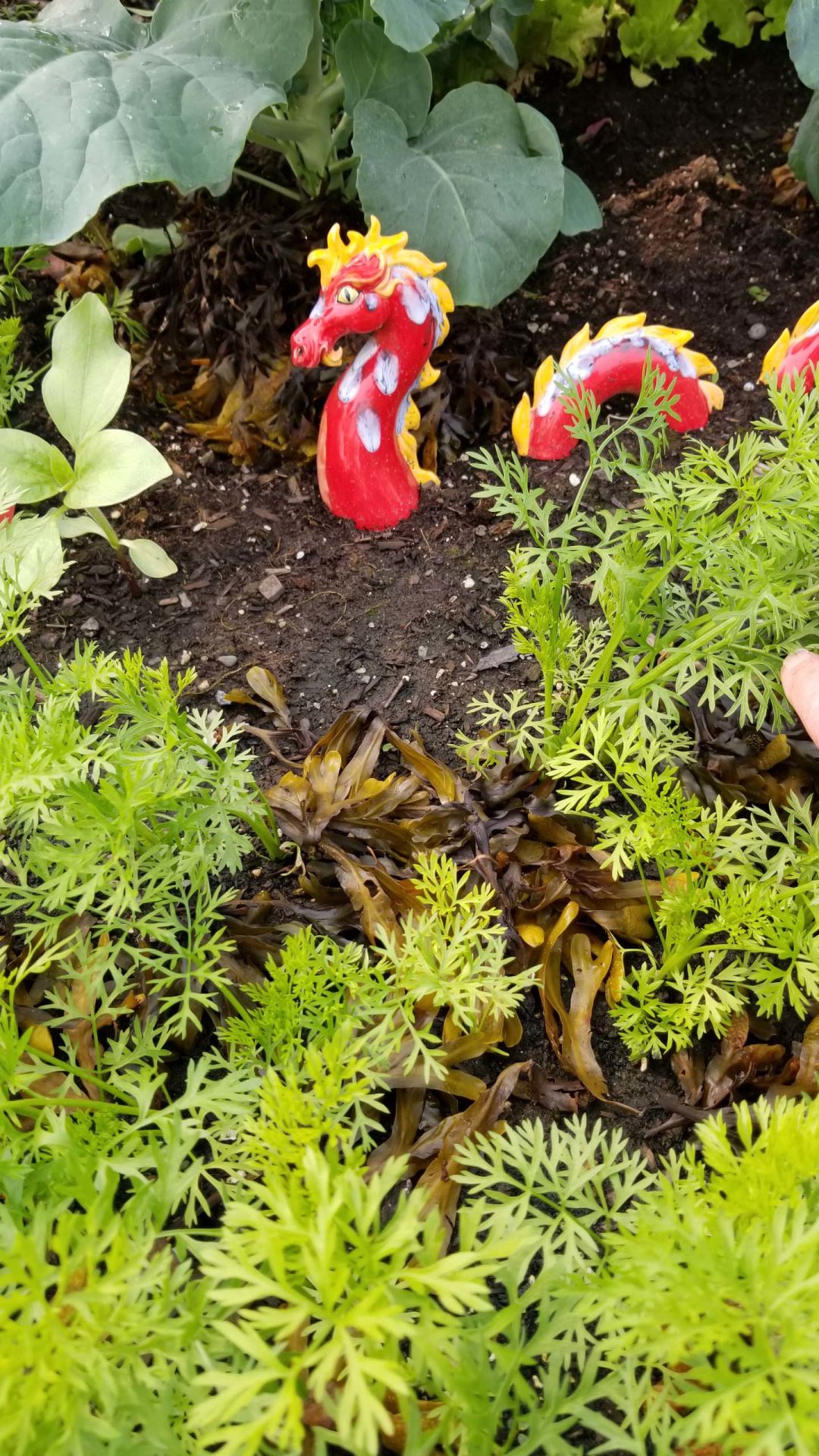 Garden whimsy with a nautical theme. 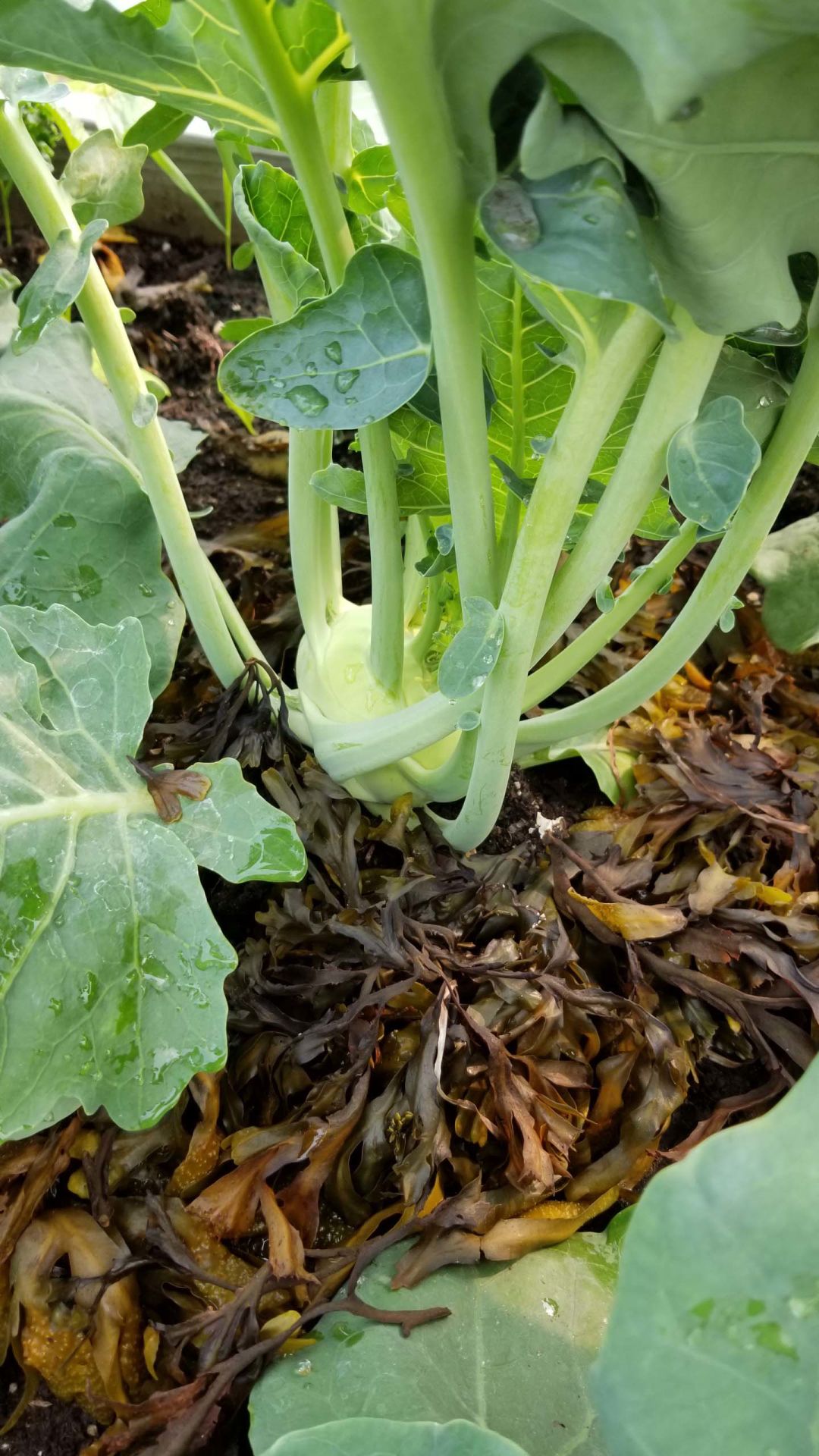 J.R. Ancheta used seaweed that he brought from Sitka to mulch his community garden beds. 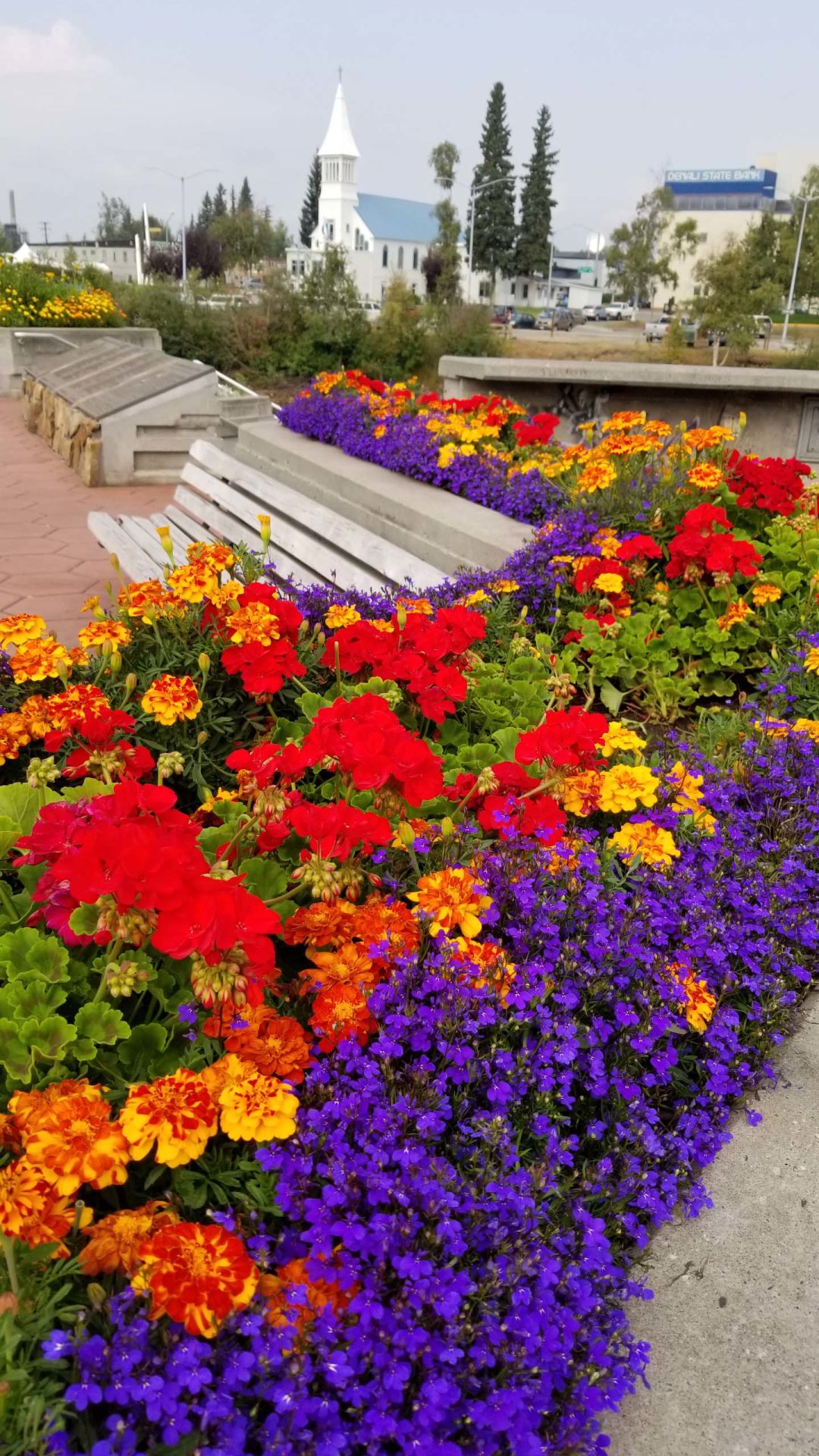 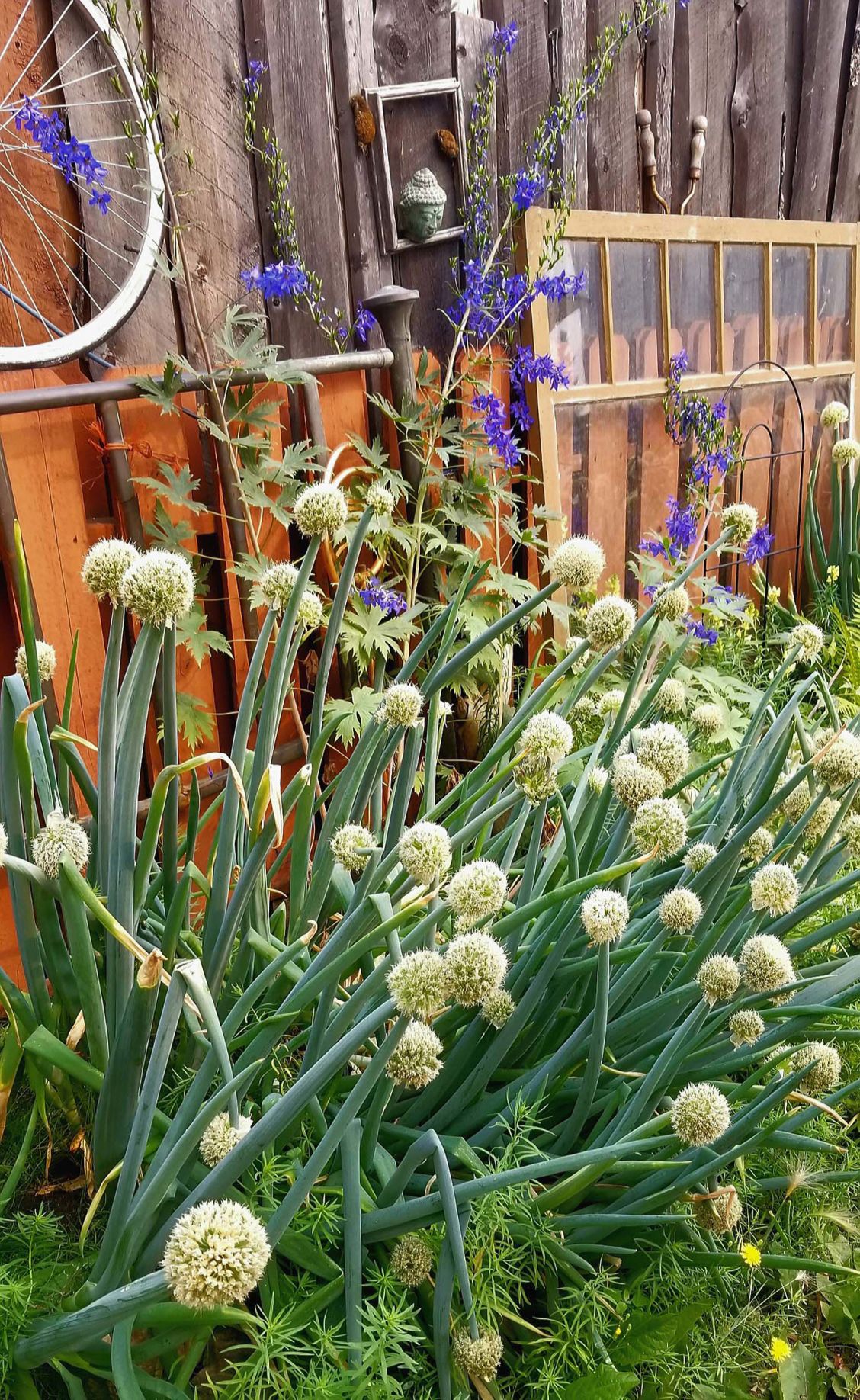 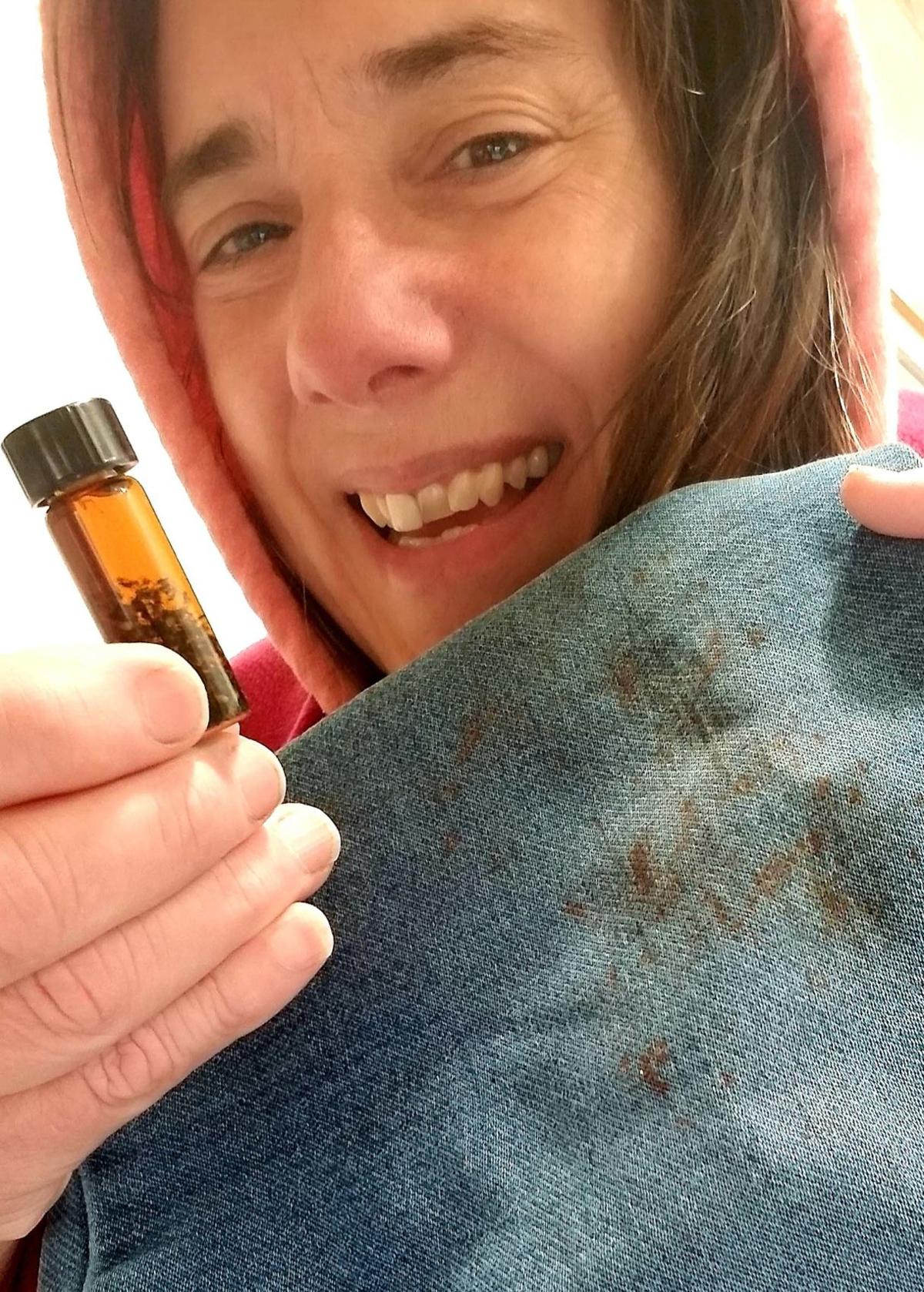 Holding a vial of aphids collected from dandelion crowns, Julie Riley prepares to wash the red stains from her jeans. 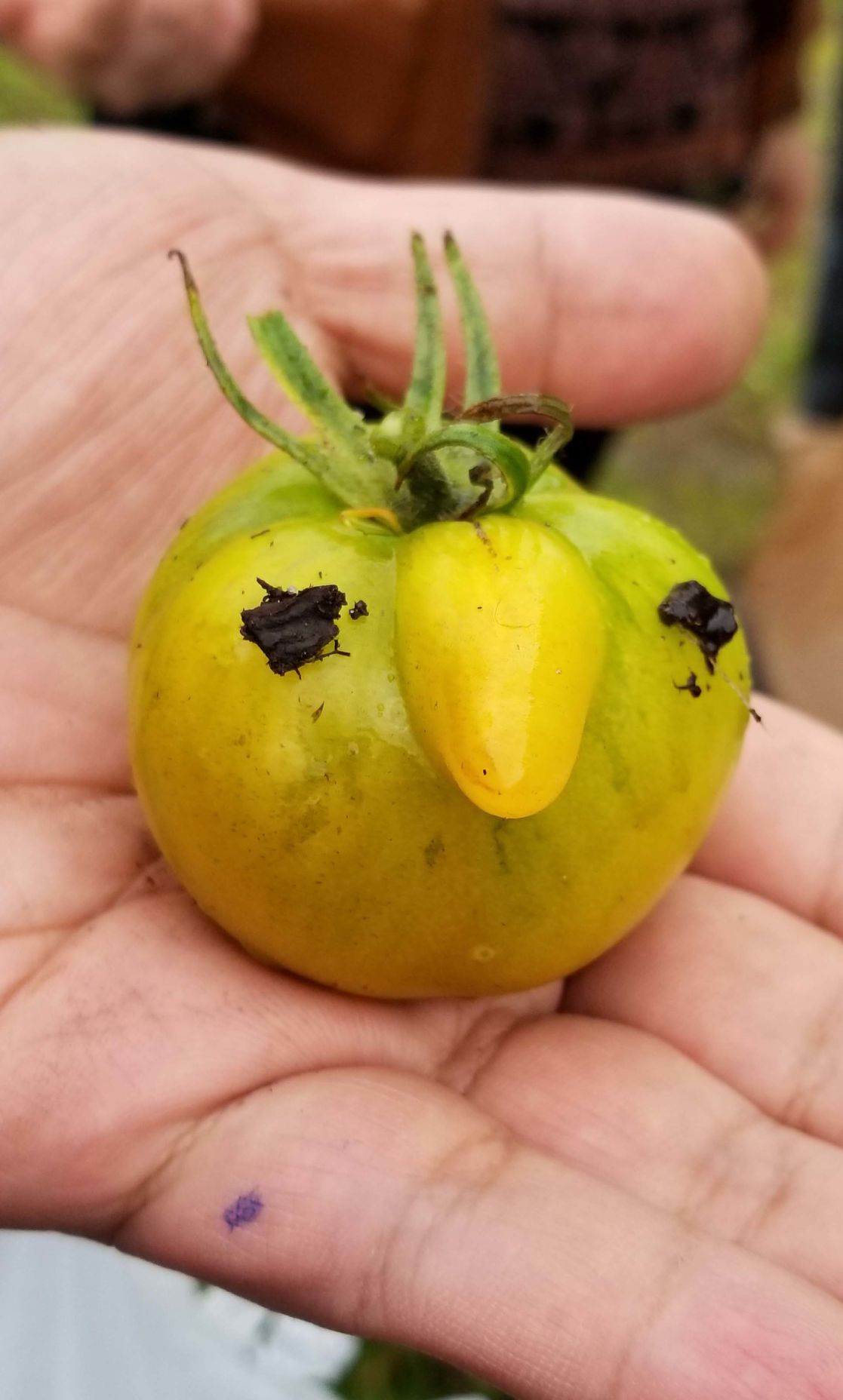 Garden whimsy with a nautical theme.

J.R. Ancheta used seaweed that he brought from Sitka to mulch his community garden beds.

Holding a vial of aphids collected from dandelion crowns, Julie Riley prepares to wash the red stains from her jeans.

Since November is a month when the horticulturally inclined have a chance to catch their breaths and cornucopias aren’t a strong Alaska tradition, I’ve decided now’s my chance to write about the year’s most exciting moments.

The community garden is the perfect place of espial. What tickled me most was finding fresh seaweed in the UAF community garden. Seaweed in Interior Alaska! The ceramic sea serpent in J.R. Ancheta’s bed should have tipped me off that he was up to something. The man brought seaweed for his garden from Sitka. I was afraid to ask if he packed it in a suitcase. The vegetables in J.R.’s garden beds were quite robust. When I suggested he weigh his big cabbage, he sent a picture of himself carrying the 28.5 pound giant into the airport where he put it on a scale.

I’m a horticulturist but many of my most memorable moments involve insects. What I do is client driven and until Matt Labrenz arrived last month, I also handled integrated pest management questions. This gave me an opportunity to see new things, including the strange and bizarre but true.

In late September a homeowner called concerned about the large number of insects on her house. I asked if they squished red. I’d seen this phenomenon before, thousands of dandelion-feeding aphids massing together on the side of a house right before the growing season’s end. To reach the house the aphid horde had to crawl across 30 feet of bare gravel. I traced them back to dandelions in the lawn.

This year I also decided to “slow down and smell the roses.” I took time to see what’s inside spittlebug spittle. Seeing the ugly-as-bug insect for the first time did not make my top-10 list of memorable moments but the little froth maker was more exciting than discovering that my household dust bunnies consist mainly of human hair. I was at least hoping for a dust mite or two.

In July, jury duty took me downtown to places I normally don’t travel. The brilliance of the annual flowers in Golden Heart Plaza was amazing but what really got me excited were the scale insects. Scale lose their appendages as adults and become stationary. They look nothing like how you’d expect an insect to look with no legs, no head, no antennae. The lower branches of a couple of trees were plastered with these insects that I’ve yet to identify.

In Griffin Park, I saw slave-making ants that I’d learned about at Adult Bug Camp. At Noble Street and Third Avenue, I walked past hedge cotoneaster, Cotoneaster lucidus. I read about this landscape shrub 20 years ago but had never seen it. I was starting to think it didn’t really exist and as I walked to my car there it was, looking similar to the commonly planted Peking cotoneaster except for the hairs on the undersides of its leaves.

At a coffee shop, I found an eclectic garden with a stunning patch of perennial onions. In Fairbanks these onions are passed from gardener to gardener, but no one had been able to tell me their name. By happenstance, I stumbled across an article that helped to solve the mystery. I love it when this happens. The onions are called Welch onions, Allium fistulosum. Their origin is from the wild Altai onion not in cultivation.

Two blocks from the Rabinowitz Courthouse, there were pale green aphids feeding on stinkweed, Artemisia tilesii. Granted, there are purported to be near to 500 species of aphids, but I had never seen the likes of these. They were all legs and arranged equidistant along the upper stems, their piercing mouthparts stuck into the plant’s vascular system with their back ends up in the air.

I figured nothing would make these creatures leave the precious flow of sap they’d tapped into but there was a mass exodus when I jiggled the plant. Young and old alike marched quickly down the stem. So much for the Cooperative Extension recommendation to wash aphids off with the strong spray of water. This species, at least, seemed quite capable of walking right back up the stems.

In August, I was thrilled to learn more about earthworms as I followed soil scientist Kyungsoo Yoo and his team from the University of Minnesota as they sampled for earthworms. I now have firsthand experience on how to extract earthworms from the soil using powdered mustard. If you’re interested in sharing my enthusiasm, join me for a presentation on Alaska’s earthworms from 7-8:30 p.m. Wednesday in Room 108 of the University Park Building, 1000 University Ave. The presentation is free. There is no need to register, but for more information you may call, 474-1530.

Julie Riley is horticulture agent for UAF Cooperative Extension Service. She is located in the Tanana District office and can be reached at 907-474-2423 or jariley@alaska.edu.