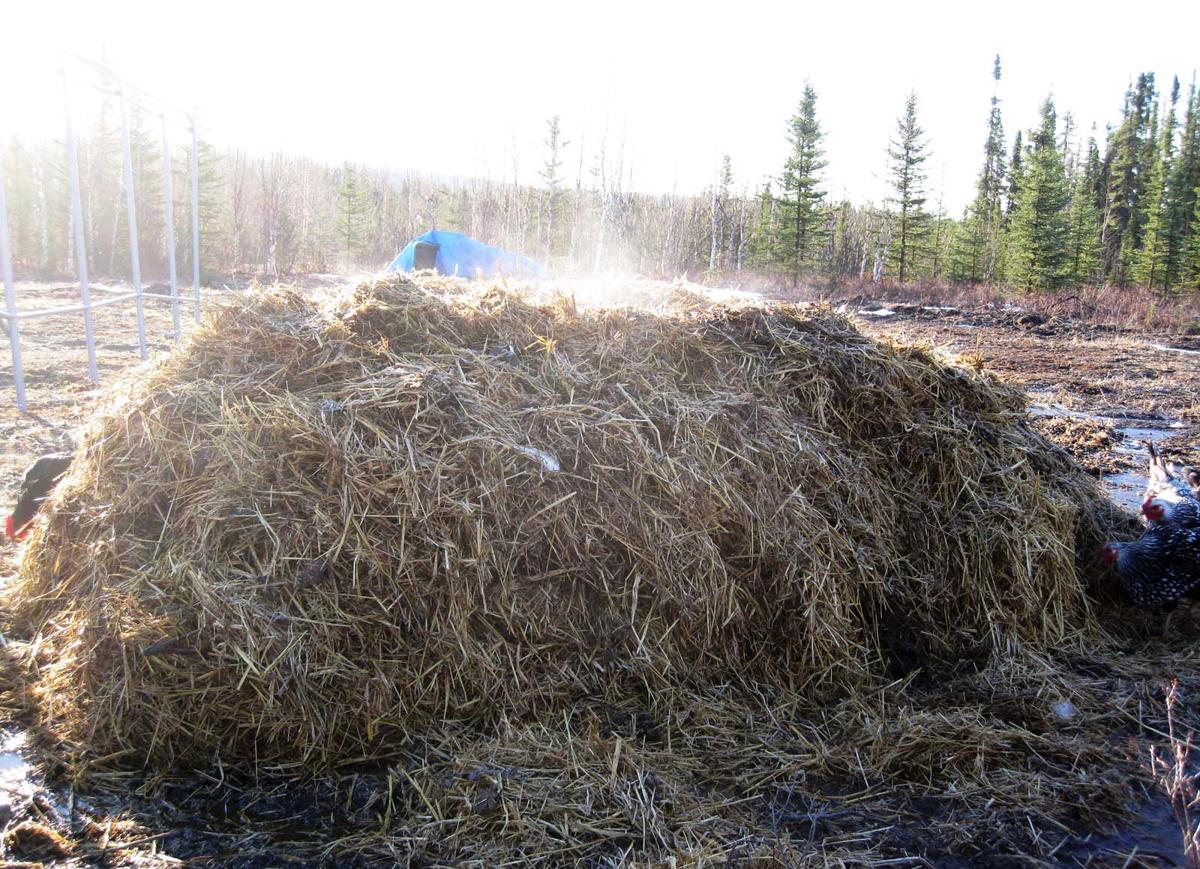 You want to make sure your pile does not heat up over 160 degrees. You can see the steam coming off this pile. You can monitor your pile with a long-stemmed thermometer. 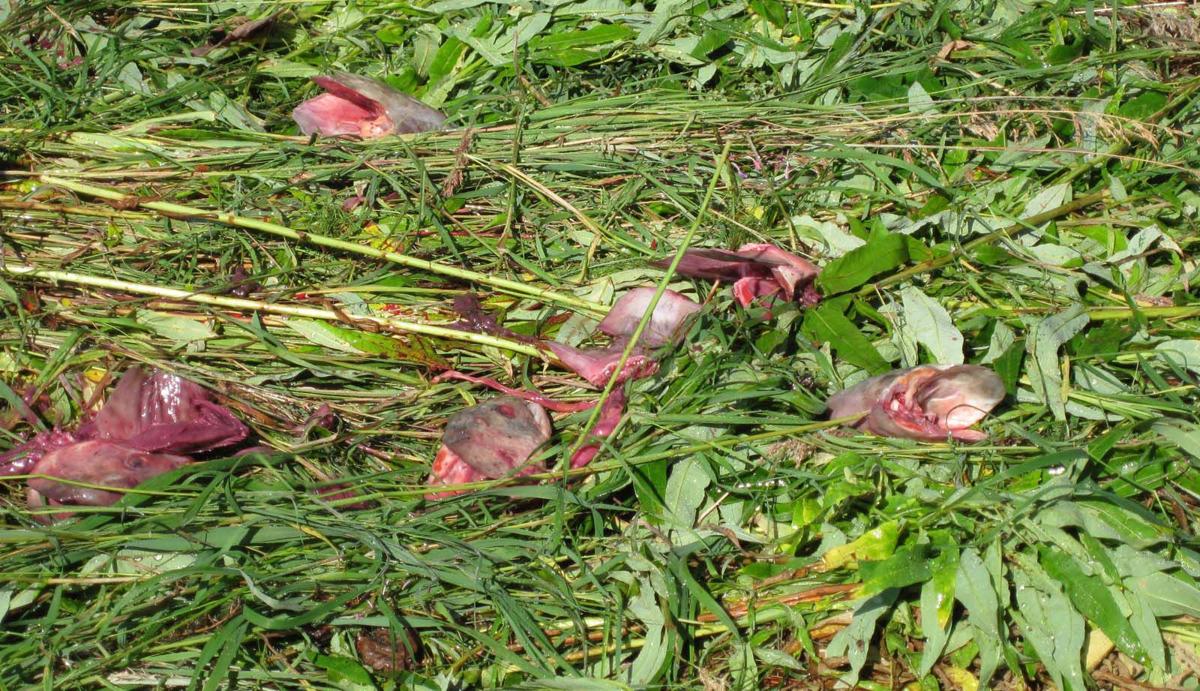 Fish heads are being layered with fireweed in this pile.

You want to make sure your pile does not heat up over 160 degrees. You can see the steam coming off this pile. You can monitor your pile with a long-stemmed thermometer.

Fish heads are being layered with fireweed in this pile.

For many Alaskans, it’s time for fishing. But before you toss your fish carcasses back into the river, consider two options to eke out every last bit of goodness from them. One is to make soup and one is to compost them. Better yet, do both and make broth or soup first, then compost the carcasses or make some soup and some compost. Fish broth is nutritious and tasty for you, and fish compost is nutritious and tasty for your plants.

This recipe (bit.ly/3cpTewB) incorporates salmon heads, and I would not hesitate to add the tails and bones, too. I would also recommend Brazilian fish stew.

Methods and materials for composting fish abound. Traditionally, fish was just buried in the garden with decent results. In Alaska, you do risk attracting dogs, bears, flies and other pests to your garden if you practice this method. Steve Kahn wrote in the Anchorage Daily News that one year in the fall, even though there were plenty of other fish washed up on the shore of Lake Clark, bears churned up his garden to get at the ones he and his wife had buried.

If you plan to compost the carcasses, you’ll want to make sure that you have a large bin or pile and that it is fenced in — perhaps with an electric fence if bears or dogs are problematic where you live.

Much of the same principles apply to composting in general (bit.ly/2zYMDMq) as with any composting, but there are some additional considerations. Fish composting has the potential to turn into a positively rank operation so you need to have a large enough bin or pile to manage those odors. In general, for a compost pile to heat up, it needs to be at least a cubic yard in size. But when composting fish, bigger is better.

One compost design (bit.ly/2XShSRy) starts with a foot of “fluffy” materials such as leaves, peat or wood chips. Next, three parts wood waste and one part fish waste are alternately layered. Finally, a layer of finished compost caps the pile, which acts as a biofilter or barrier to the odor.

Another bin design that was tested featured a 4-inch compartment all around the compost bin to mitigate odors (bit.ly/3dufIOz). The researchers found that the odor was reduced and made it possible to place the pile within about 50 feet from a home. The pile consisted of 2-inch layers of fish, 4-inch layers of straw or leaves, followed by 1/2-inch layers of soil. Because it was in a bin, it was hard to turn, so they laid perforated 5-inch plastic pipe on the bottom of the pile (that extended beyond the pile itself) to draw air up through the pile.

An Alaska compost company combined sphagnum moss and fish waste (bit.ly/2U8vYgp) at a ratio of 1 fish tote (800 to 1,000 pounds of fish) to 4 cubic yards of peat moss.

“Compost Solution to Dockside Fish Wastes” (bit.ly/3cpOmYs) and “Composting: a Disposal Method for Fish Waste” (bit.ly/2U7Qu0H) are old publications but provide some good visuals on how to build your compost pile as well as on aeration and moisture regulation.

You can use a compost calculator like this one at bit.ly/3742kOD to customize your recipe and to help you achieve a carbon-to-nitrogen (C:N) ratio that ranges from 25:1 to 30:1. It estimates the C:N ratio of various components. To know for sure, you’d have to get them tested. I’ve seen published C:N ratios for fish ranging from 4:1 to 10:1. The calculator doesn’t include fish waste but you can use something with an equivalent C:N ratio.

You do need to take care when composting fish to minimize the smell. It also has the potential to create an environment where harmful microorganisms like salmonella and E. coli can flourish. There are even some legal considerations that you should be aware of (hdl.handle.net/11122/4398)

Here are some more helpful tips on finding waste to compost, including fish, and managing your pile, at https://youtu.be/lbrbyuV6zBc.

There are so many ways to upcycle your fish carcasses, so think twice before you toss them back into the river. If you find composting fish isn’t for you, you can always buy Fishy Peat potting soil produced here in Alaska.

Heidi Rader is a tribes Extension educator for the University of Alaska Fairbanks Cooperative Extension Service and the Tanana Chiefs Conference. She can be reached at 907-452-8251, Ext. 3477 or hbrader@alaska.edu.