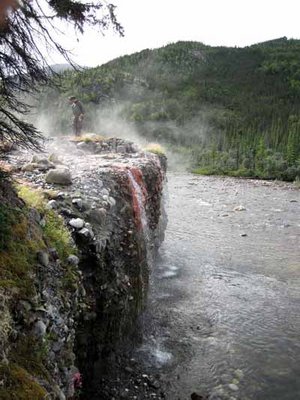 The steaming hot springs waterfall cascades down from the source of Melozi Hot Springs into Hot Springs Creek below. Jay Cable stands atop the falls near the springs’ hot tub. Photos by Amy Marsh 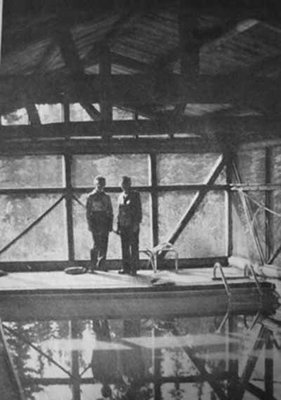 A photo of the now-derelict indoor pool, taken from a Melozi Hot Springs brochure. Photos by Amy Marsh 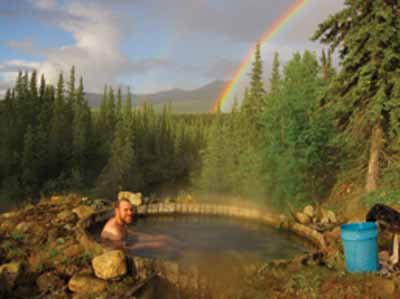 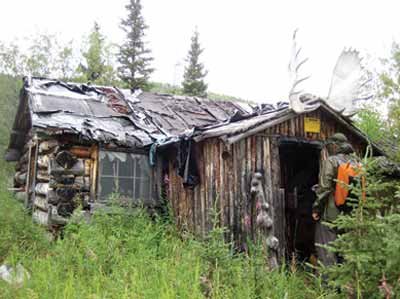 Jay Cable pauses in front of the “Reindeer Cabin” at Melozi Hot Springs. According to BLM records, the cabin was built almost a century ago to accommodate servicemen stationed at Kokrines. Photo by Amy Marsh

The steaming hot springs waterfall cascades down from the source of Melozi Hot Springs into Hot Springs Creek below. Jay Cable stands atop the falls near the springs’ hot tub. Photos by Amy Marsh

A photo of the now-derelict indoor pool, taken from a Melozi Hot Springs brochure. Photos by Amy Marsh

Jay Cable pauses in front of the “Reindeer Cabin” at Melozi Hot Springs. According to BLM records, the cabin was built almost a century ago to accommodate servicemen stationed at Kokrines. Photo by Amy Marsh

FAIRBANKS, Alaska — Time had stopped at Melozi Hot Springs. In the resort’s handsome main lodge, we found bookshelves displaying copies of “People” and “Cosmopolitan” from the early 1980s. Disused fishing poles crouched in the foyer of the handsome log building, next to board games and frisbees that hadn’t known the touch of children in at least a decade and a half.

Manila folders full of tax records and visitor inquiries from 1985 yellowed in file cabinets. Jars of spices and dry beans lined kitchen shelves, waiting to be served to guests who checked out for good in the last millennium. After 20-odd years as a working resort, Melozi Hot Springs had been given over to dust and echoes.

Hearing tales of the place, my friends Jay and Amy and I journeyed to Melozi in July to see it for ourselves. Reaching the resort — located about 30 miles northeast of the Yukon River village of Ruby — had once been a simple matter of landing a bush plane on the Melozi airstrip. But the strip today is washed-out, overgrown and unusable, so it took us a flight from Fairbanks to the village of Ruby, a 30-mile ferry up the Yukon River, and two days of hiking over the rainy, windswept spine of the Kokrines Hills before the resort came into view in the distance.

Long though it was, the trek was not without its rewards. Melozi’s appeal a s a bush getaway was apparent as soon as we spied its idyllic outdoor hot tub, perched on a bluff above Hot Springs Creek and affording sweeping views of the bald Kokrines peaks in the distance. More remarkable is where the hot water goes from there: it cascades down the 20-foot bluff in a scalding waterfall, emptying into the creek and fostering a muted rainbow of algal stalactites along the way.

Though isolated, Melozi is no secret. The roughly 130-degree springs were first found by Alaska Natives, and were later enjoyed by servicemen working a telegraph station in the now-deserted Yukon River village of Kokrines. In 1911 the Army built a two-room building at the springs, a sturdy log structure known as the “Reindeer Cabin” after reindeer herders who relaxed at the springs in later years.

The modern life of the resort began in 1966, when Leonard and Pat Veerhusen, a middle-aged couple living in Galena, took out a 20-year Bureau of Land Management lease on Melozi and moved in. A skilled carpenter, Len Veerhusen spent a decade fashioning a comfortable getaway out of a mosquito-ridden patch of spruce. He built the sizable main lodge, four guest cabins, the outdoor tub, and an indoor thermal pool, along with a garage, smokehouse and other maintenance buildings. Water from the springs supplied hot baths in some of the cabins and even a couple of flush toilets.

Veerhusen died in 1976, and the resort continued to operate under a series of owners and proprietors; according to BLM records, Melozi drew anywhere from a couple dozen to a couple hundred guests each year and never turned much of a profit. In 1996, dissatisfied with the ownership group’s fulfillment of lease terms, the BLM let the lease run out and didn’t offer it for renewal. Since then Melozi has gone unused, quietly but definitively reverting to ghost town status.

What is startling about Melozi is how little the years have weighed upon it. Only a few buildings seem beyond repair: A huge hole has pierced one wall of the Reindeer Cabin, the garage is caving in, and the roof over the pool has collapsed. Otherwise, Veerhusen’s sturdy log construction has stood the test of time. Roofs are intact and strong shutters and thick walls have kept the bears out. Though there have clearly been multiple visitors in the days since the place shut down — we found evidence of a number of people passing through, including a large group from Switzerland that moved in for most of a month — Melozi’s isolated location has mostly saved it from vandalism and litter.

And it’s also largely kept souvenir hunters at bay. A mostly intact ATV still waits in a garage, an out-of-tune piano in the main lodge. Pots, pans, dishes and cutlery fill the kitchen. Ancient snowmachines, their engines stripped, fade into the forest.

More memorable are the lingering personal touches: in the Reindeer Cabin, guests’ business cards are pinned up, illuminated now by light streaming through the hole in the wall. Dozens of sketches of children are tacked inside a doorway. In the main lodge, a bulletin board exhibits fading snapshots: a man astride a cut log; two men examining a bush plane in the snow; a toddler naked save for cowboy boots. A couple of personal journals rested on the bookshelves; written by a former owner, they catapulted us back to 1981, when summer guests were a regular occurrence, meals included fresh vegetables from the on-site greenhouse, and the psychological toll of a lonely Melozi winter evoked shades of “The Shining.” The sense of piled-on years, of wild stories lost to memory, was palpable throughout, creating an atmosphere equal parts sad and inviting. Everything we touched was both a memento of the place’s livelier days and a reminder of its decay.

The three of us stayed in Melozi for two days, soaking endlessly below the hot waterfall and sitting in the outdoor tub until the heat overcame us. We wandered the weedy grounds, took photos of the buildings, poked through dusty shelves and boxes, and raised countless questions about the people who had come before us. In the old papers of the main cabin, we found some of our answers. What we could not know, though, was whether Len Veerhusen’s dream might ever live again.

Despite the tremendous hardships involved in operating a place like Melozi, the thought doesn’t seem impossible. The final ownership group (which disputes the BLM’s actions on the lease) maintains a claim on the physical property, while a list the BLM keeps of people interested in Melozi’s fate is 23 names long. The BLM field manager for the area says a new lease on Melozi would require someone willing to take stock of the place, to clean it up, and to somehow make it into a profitable proposition. So far no one has stepped up to the plate.

As we reluctantly loaded up our packrafts to depart, the future was on our minds: a three-day packraft float down Hot Springs Creek and the Melozitna and Yukon rivers to Ruby, the flight back to Fairbanks, the resumption of our lives. We left behind a spot that, for the time being and perhaps forever, is trapped inextricably in days gone by.

As the waterfall receded behind us, a quote came to mind, one I had seen on a business card pinned up in the Reindeer Cabin and which seemed to sum up the mixture of solemnity and exuberance that permeates Melozi Hot Springs.

“We live in the present,” reads the card, “And dream of the future. But we learn eternal truths from the past.”

Tom Moran is a former News-Miner reporter and recent graduate of the UAF MFA program in Creative Writing. He gratefully acknowledges the help of Mike Travis, whose new book “Melozi” chronicles the summer he spent working at the resort as a teen.