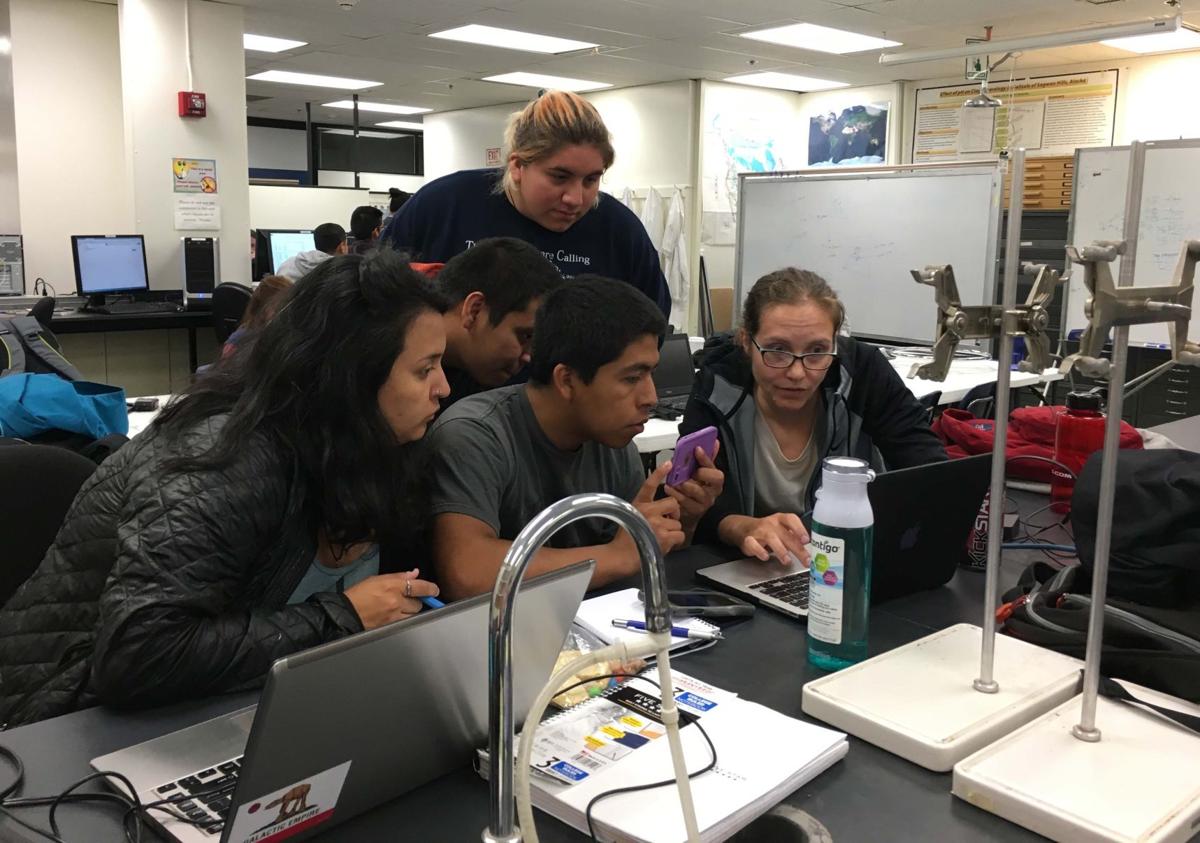 Visiting California college students learn how to analyze data at the University of Alaska Fairbanks. 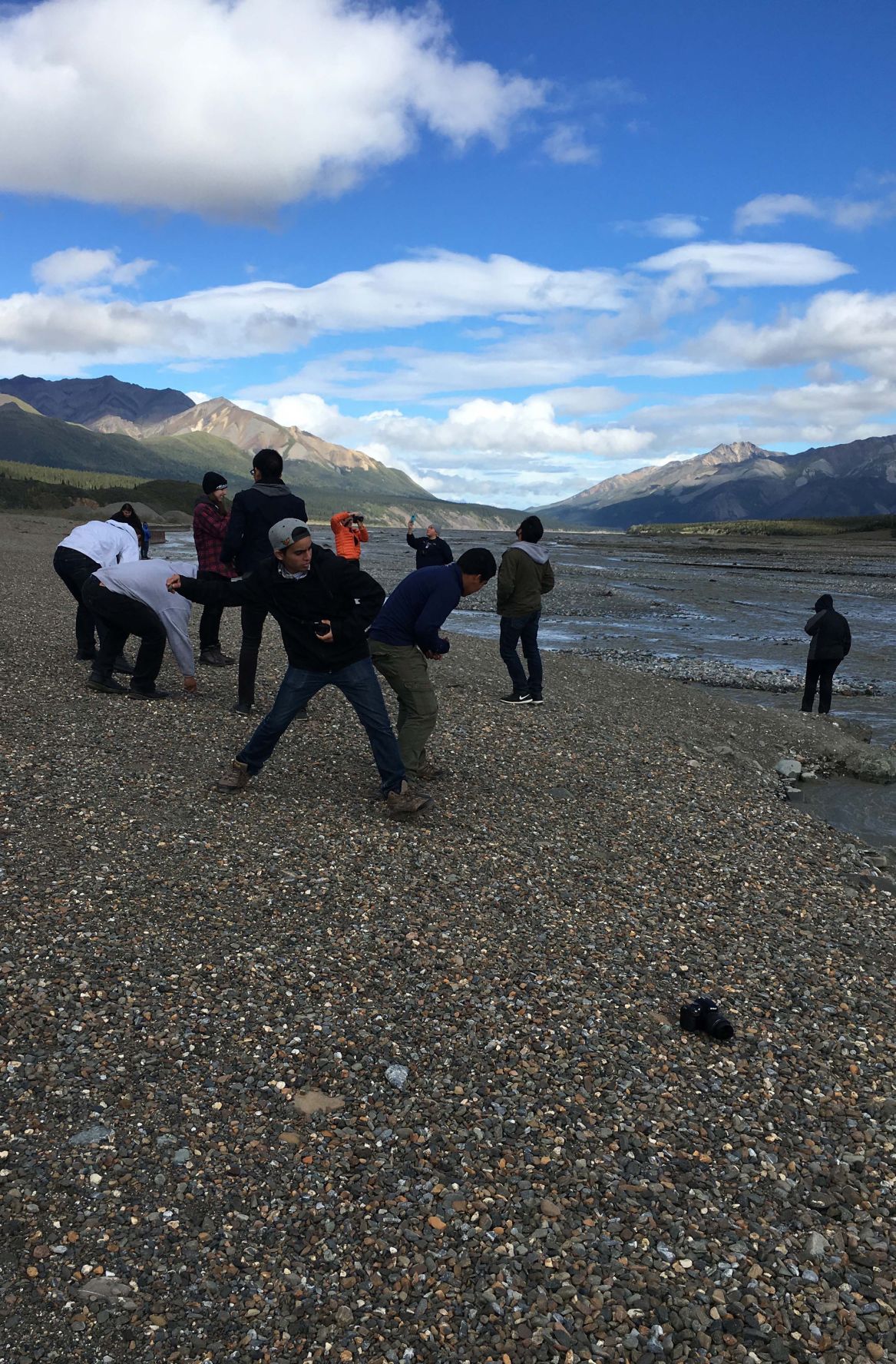 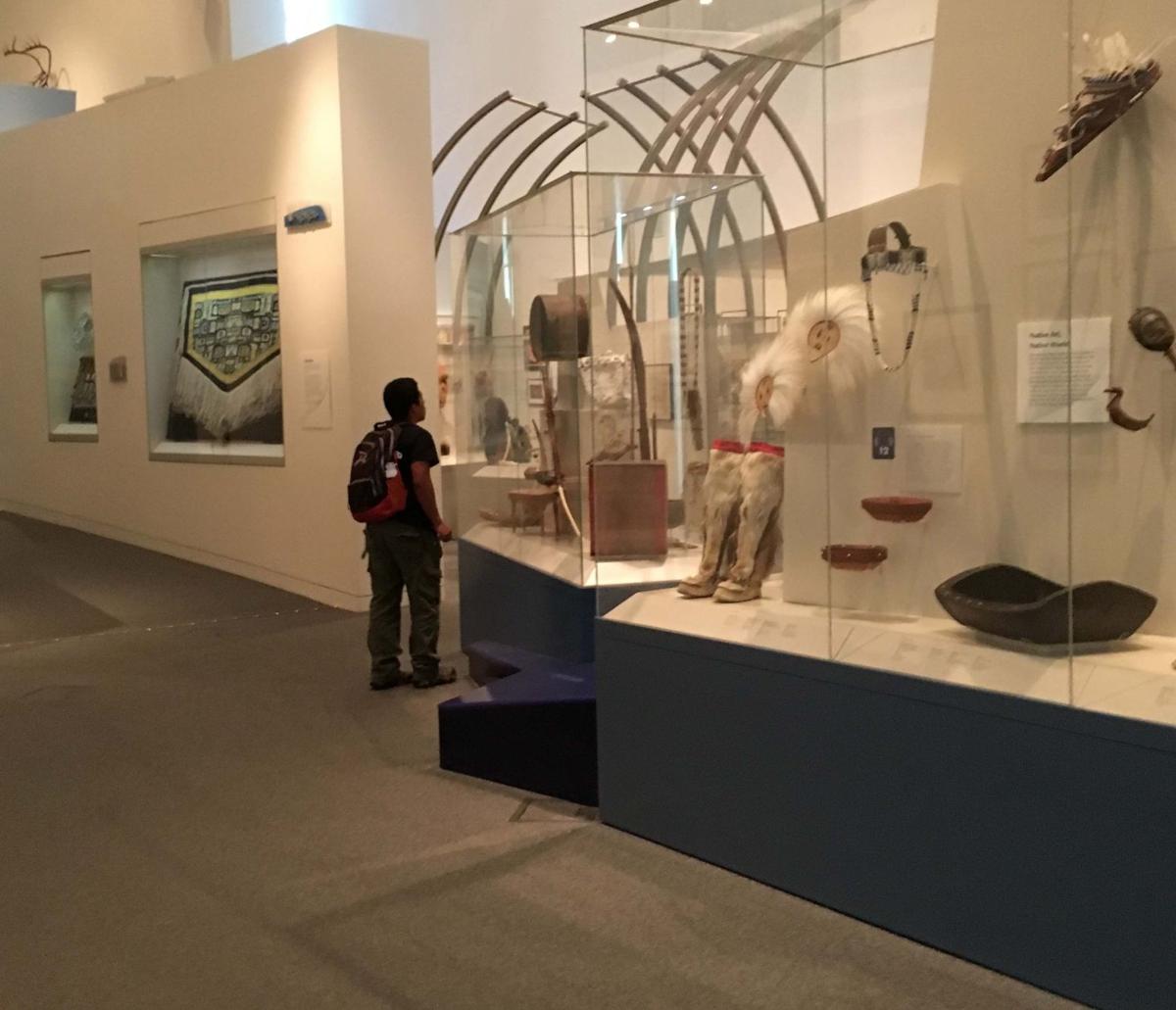 Humberto Rodriguez explores the Museum of the North on the University of Alaska Fairbanks campus.

Visiting California college students learn how to analyze data at the University of Alaska Fairbanks.

Humberto Rodriguez explores the Museum of the North on the University of Alaska Fairbanks campus.

FAIRBANKS — Challenge accepted. That’s what John Smelter, who was then an admissions counselor from the University of Alaska Fairbanks, said to a professor from a California community college last fall.

The challenge was to find a UAF researcher willing to host 22 students from Santa Ana College for a rigorous scientific field experience. If he could find a willing researcher, then Cathie Shaffer would try to find the funds to get the students here.

Shaffer is the director of the MESA (Mathematics, Engineering, Science Achievement) program at Santa Ana College. MESA provides support and opportunities for low-income students of diverse backgrounds to explore and transfer to universities in the program’s namesake fields. Most of these students are also the first in their families to pursue a college education.

“We have a problem in this country,” Shaffer said. “We don’t have enough talented, passionate people becoming mathematicians, scientists, engineers and computer scientists. We also have a problem with huge segments of our population who do not go into these fields for various reasons. One idea is that it is due to lack of exposure to professionals in these high demand and challenging fields of science and engineering. Santa Ana College and the state-wide MESA program are committed to battling these trends.”

Smelter went to Santa Ana College to recruit students to visit UAF. Through the influence of dynamic fire technology professor Suzanne Freeman, many students had been calling Smelter to ask about UAF degrees. It was a natural place to stop while he was on the college fair circuit in California. So when Shaffer threw down the gauntlet, Smelter picked it up and handed it to his friend Katie Spellman. She was once a UAF biology graduate student who has led citizen science projects to monitor invasive plants in Alaska.

“Our project looks at engaging learners in climate change education through citizen science with the target of reaching audiences underserved in the fields of science, technology, engineering and math,” she said.

Thus, the perfect match was made.

Spellman welcomed the students to Alaska, who would be here for 10 days and spend a good portion of that time with her and other research scientists from UAF. She explained they would be helping NASA with one of its newest earth satellites that measures the amount of water in the top layer of soil everywhere on Earth’s surface. This is the layer in which crops and other vegetation grow. It wouldn’t be as easy as just measuring soil moisture and submitting it to NASA, Spellman told the students. They needed to come up with a scientific question in which measuring soil moisture was a necessary step to finding the answer.

The groups came up with all sorts of interesting questions: Is there a relationship between soil moisture and wildfire severity or extent?

Each student group worked with a scientist. On board for the project were scientists Elena Sparrow, Christine Butcher, Dave Verbyla and Javier Fochessato from UAF; and Phil Hughes from Santa Ana and grad students Allie Hughes and Crystal Castillo.

Under their mentorship, the students collected data and used both their field data and historical NASA satellite observations to answer different aspects or angles of their questions. Then they compiled their results into a poster, which they presented to the rest of their group and their scientist mentors.

“They were on fire,” Spellman said. “They were interested in doing real research and contributing their results to science.”

The students put in long days and sometimes long nights to finish the projects. “Probably the best part was seeing the northern lights on Aug. 10 from 1:55 a.m. to 2:05 a.m.,” student German Luevano said. That’s when his group finished working for the night and was lucky enough to see the aurora.

He added that seeing the aurora wasn’t the only benefit. The students completed units of transferrable geology work with Phil Hughes before and during the trip. They also gained valuable skills.

“It is really important to conduct research as an undergraduate student because it gives you an opportunity to experience graduate level work,” he said. “Also, it opens doors for each individual. Conducting research takes commitment and determination, which are valuable key factors for self-growth. Furthermore, now that I have completed my first hands on research at an amazing university, UAF, I look forward to sharing my experience with my family, friends, classmates, professors and even professionals.”

So what did other students think? Eliel Aguillon, who is considering transferring to UAF to study civil engineering, said, “My favorite part of the whole trip was conducting the research since it was so fun just putting the pieces together, it was like a puzzle.”

For Karen Roman, a mechanical engineering student, “I learned the importance of working with a team. I have had multiple jobs before, ranging from cook, barista, waitress, STEM tutor, and AVID tutor, so I always thought working with a team was going to be easy, but it was completely different than what I expected. Everyone had an opinion and everyone felt they were right ... In the end, after endless nights of studying, discussion and revisions, we found a way to include everyone’s ideas and made each and everyone’s voice was heard, not just one individual.”

Omar Nava, who studies biological engineering with a focus in bioinformatics, said, “It is important to conduct research as an undergraduate because it gives you an opportunity to apply what you learn in school. Students make the most of their college education when they start putting it to use as soon as possible.”

And for biology student Irene Mendez, “The research project my team and I worked in with Dr. Katie Spellman was to see how soil moisture affects the growth of the Bolete mushroom. Two of the most important things I learned on this trip was that it is important to be able to communicate with your team in order to work well with each other and that doing research out in the field is very exciting.”

Meghan Murphy is the public information officer and recruitment coordinator for the University of Alaska’s College of Natural Science and Mathematics.