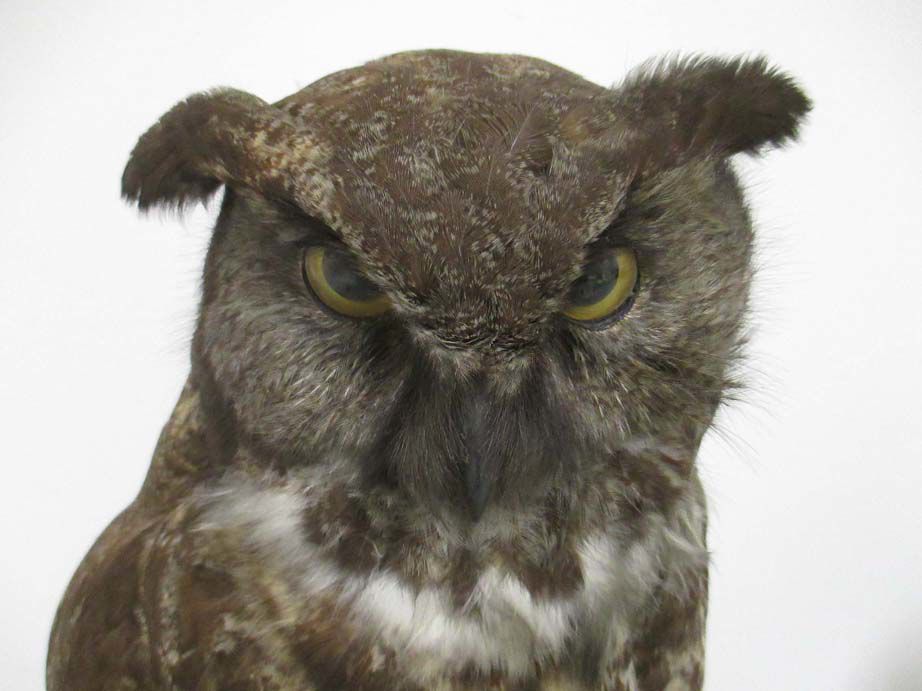 Great horned owl and boreal owl mounts are on display in the museum's Creativity Lab during programs this month. 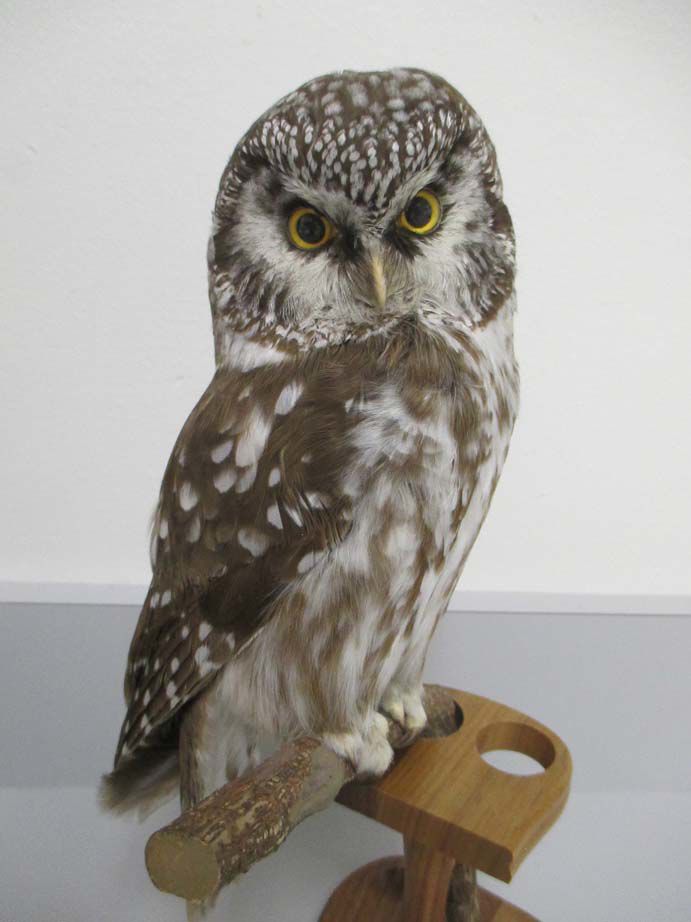 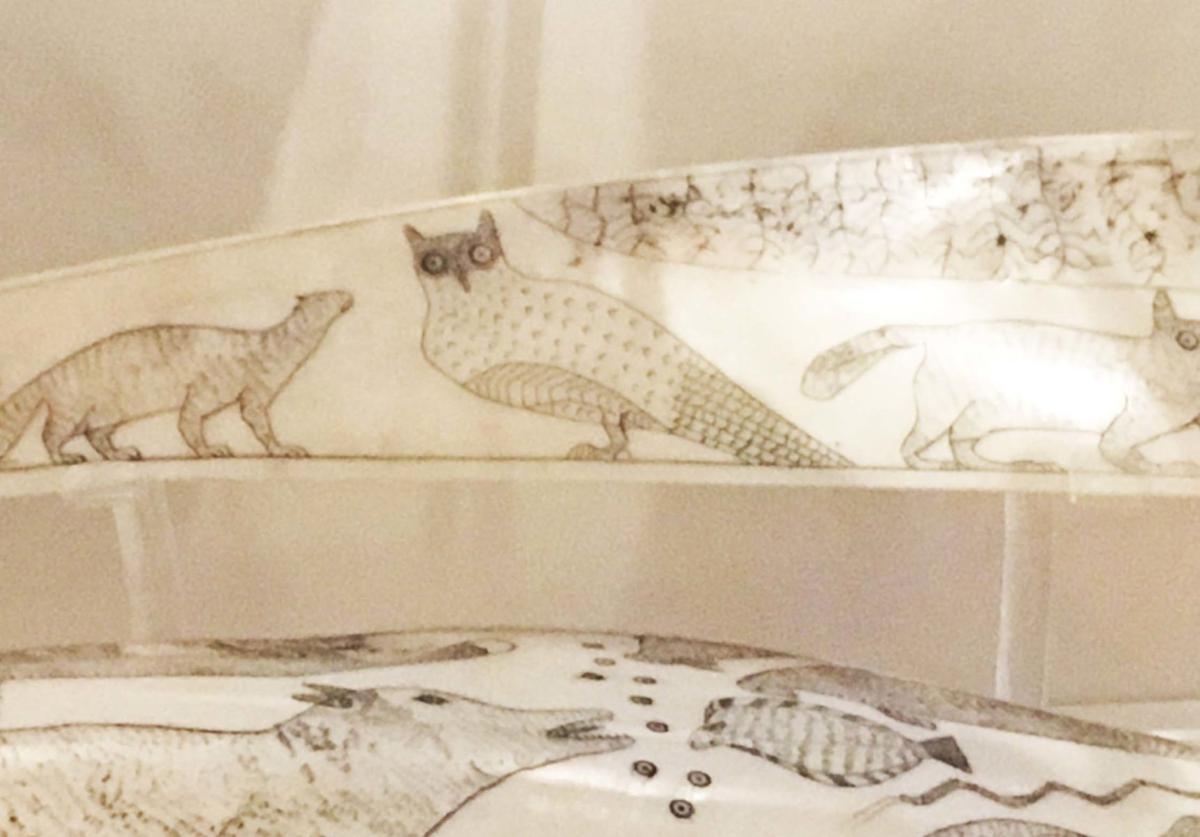 A set of engraved bones came from Unalaska around 1898 and feature many animals including an owl. 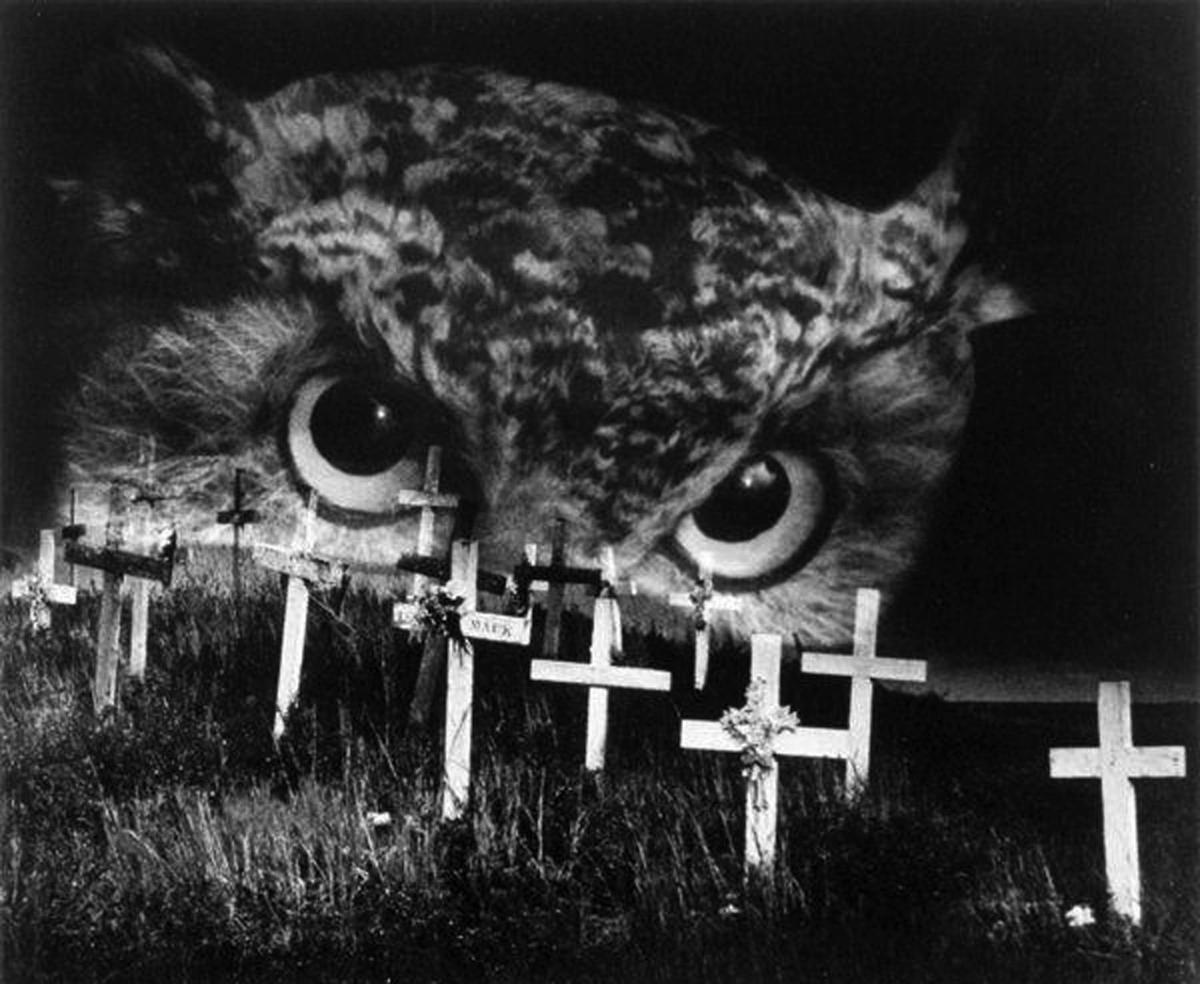 “Owl Called My Name” by Sam Kimura is on display in the museum’s Rose Berry Alaska Art Gallery. 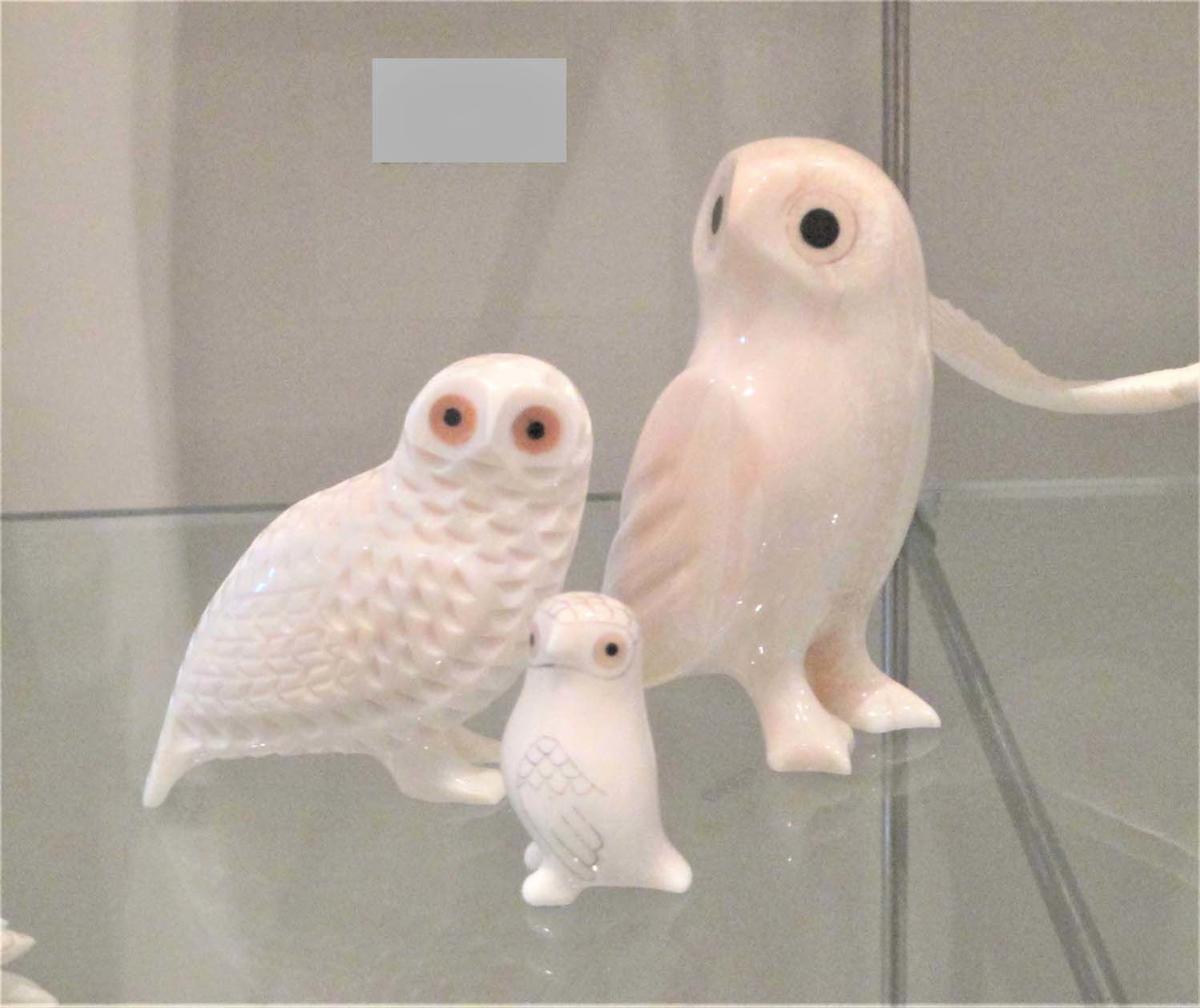 Small owls carved out of ivory by Don Ungott, Raymond Toolie, and Clement Ungott of St. Lawrence Island can be seen at the museum.

Great horned owl and boreal owl mounts are on display in the museum's Creativity Lab during programs this month.

A set of engraved bones came from Unalaska around 1898 and feature many animals including an owl.

“Owl Called My Name” by Sam Kimura is on display in the museum’s Rose Berry Alaska Art Gallery.

Small owls carved out of ivory by Don Ungott, Raymond Toolie, and Clement Ungott of St. Lawrence Island can be seen at the museum.

As the days get shorter and the darkness longer, we bid adieu to many bird species as they journey south. However, it is a great time to do some species specific birding. This season is favorable to owling. The silhouette of an owl in a leafless tree is not just spooky Halloween imagery. As trees lose leaves, it can be much easier to spot owls. And since many owls mate in late winter, the season is a good time to hear them calling to each other. The UA Museum of the North is exploring owls during hands-on programs at the museum during October.

Owls have captured our imaginations for a long time. In Greek mythology, Athena the goddess of wisdom is accompanied by an owl. The bird that accompanies her is a little owl (Athene noctua). The bird lends its name to the genus to which it belongs (Athene), named for Athena. The little owl appeared on Greek coins as early as 500 BC. The very same owl and coin are pictured on Greece’s modern 1 euro coin.

At the museum, a photograph on display in the Rose Berry Alaska Art Gallery features an owl overlooking a collection of crosses on a hillside. “Owl Called My Name” by Sam Kimura may connect to the artist’s Japanese heritage. Fukuro, the Japanese word for owl, means protection from hardship or good luck. However, it might also be a connection to the traditions of another culture.

A book with a similar name, “I Heard the Owl Call My Name,” draws its title from the beliefs of Indigenous peoples of British Columbia, the Kwakwaka’wakw.

According to their cultural traditions, hearing the owl call your name foretells imminent death. Kimura (1928-1996) was born in Alaska. He became a master photographer and professor of art at the University of Alaska Anchorage where a gallery bears his name. He was also the son of one of the first Japanese immigrant families in Anchorage. The Kimuras were sent to internment camps during World War II along with other Japanese Americans.

In Alaska, many cultural connections to owls can be found. The Tlingit used owl hoots in battle for strength and protection. In the online “Yupik Bird Book,” Frank Keim cites a Yupik saying: “ak’a tamaani anguyiit anipaunguatullruut,” that translates as “long ago warriors used to pretend to be owls.”

In an Inuit story, a young girl magically transforms into a short-eared owl. She first had a long beak but became scared, flew into a house, and flattened her beak. Connections to owls can also be seen in objects at the museum. There are masks depicting owls and with owl feathers, dance fans with owl feathers, ivory carvings of owls, and scrimshaw art of them.

Ten species of owls make Alaska home. They live in the treeless tundra, in the boreal forests around Fairbanks, and in the rainforests of Southeast Alaska. All owls are hunters and are well adapted to catching prey. Their large eyes help them see in the dark. Their hearing is acute enough to hear animals under the snow. Many species have asymmetrical or offset ears, helping them more precisely pinpoint direction of sound. They have sharp talons for catching prey and can fly near silently.

Owl wings are unique in the bird world. The leading edge of their wings have comb like structures that break up the stream of air passing by. The soft texture of the wing reduces the moving air into even smaller streams. Finally, a soft fringe helps reduce any swooshing sound. They do have to grow into this silent super power however. Young owls can be heard flapping while adult owls make nearly no noise when flying.

The owls that make their home around Fairbanks range from the diminutive boreal owl (Aegolius funereus) who is just ten inches long to the imposing great gray owl (Strix nebulosi) who can approach three feet (up to 33 inches) in length. While you might not be able to hear them flying around, with some practice and patience you can see or hear them.

Boreal owls and great gray owls both start calling for mates in January or February. Great horned owls (Bubo virginianus) also call for mates in the heart of winter. However, unlike other species, both males and females sing. And these owls regularly call throughout the year. If you intend to go owling, the hoo, hoo-hoo, hoo, hoo of the great horned owl is a good call to learn to recognize.

While the seasons are changing, we can embrace the opportunity to appreciate those we share our home with year round. During this month of spooktacular sights and sounds, make time to find some in nature.

Jennifer Arseneau is the education and public programs manager for the UA Museum of the North. She can be reached at 474-6948.

• Discover owls at the UA Museum of the North’s hands-on programs in October. Early Explorers, for children 5 and younger, meet in the Creativity Lab from 10 a.m. to noon each Friday. At Junior Curators, from 2-4 p.m. Oct. 19, kids 6 and older are invited to explore owls through hands-on investigations and crafts.

• For more information about the museum’s programs and events, visit www.uaf.edu/museum or call 474-7505.

To try at home

• Create. Make your own owl out of play dough, modeling clay or other materials. Pay attention to key features: big eyes, asymmetrical ears, sharp talons. Discuss what each adaptation is good for.

• Look and listen. Learn about Alaska’s owls and their calls from the Alaska Department of Fish and Game’s website, bit.ly/OwlsADFG. Then go out to watch and listen for owls.