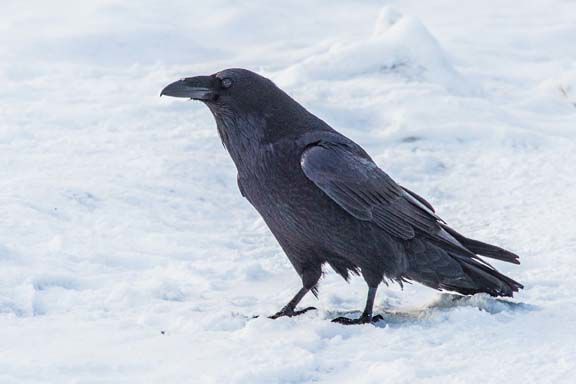 The common raven, Corvus corax, is a year-round resident of Alaska. 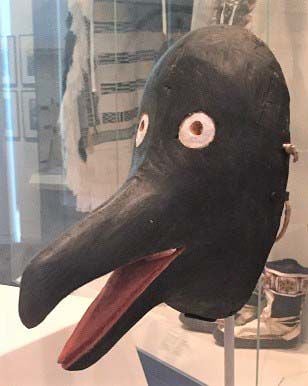 A raven mask by Iñupiaq artist Bernard Tuglemena Katexac of King Island is on display in the Rose Berry Alaska Art Gallery at the UA Museum of the North. 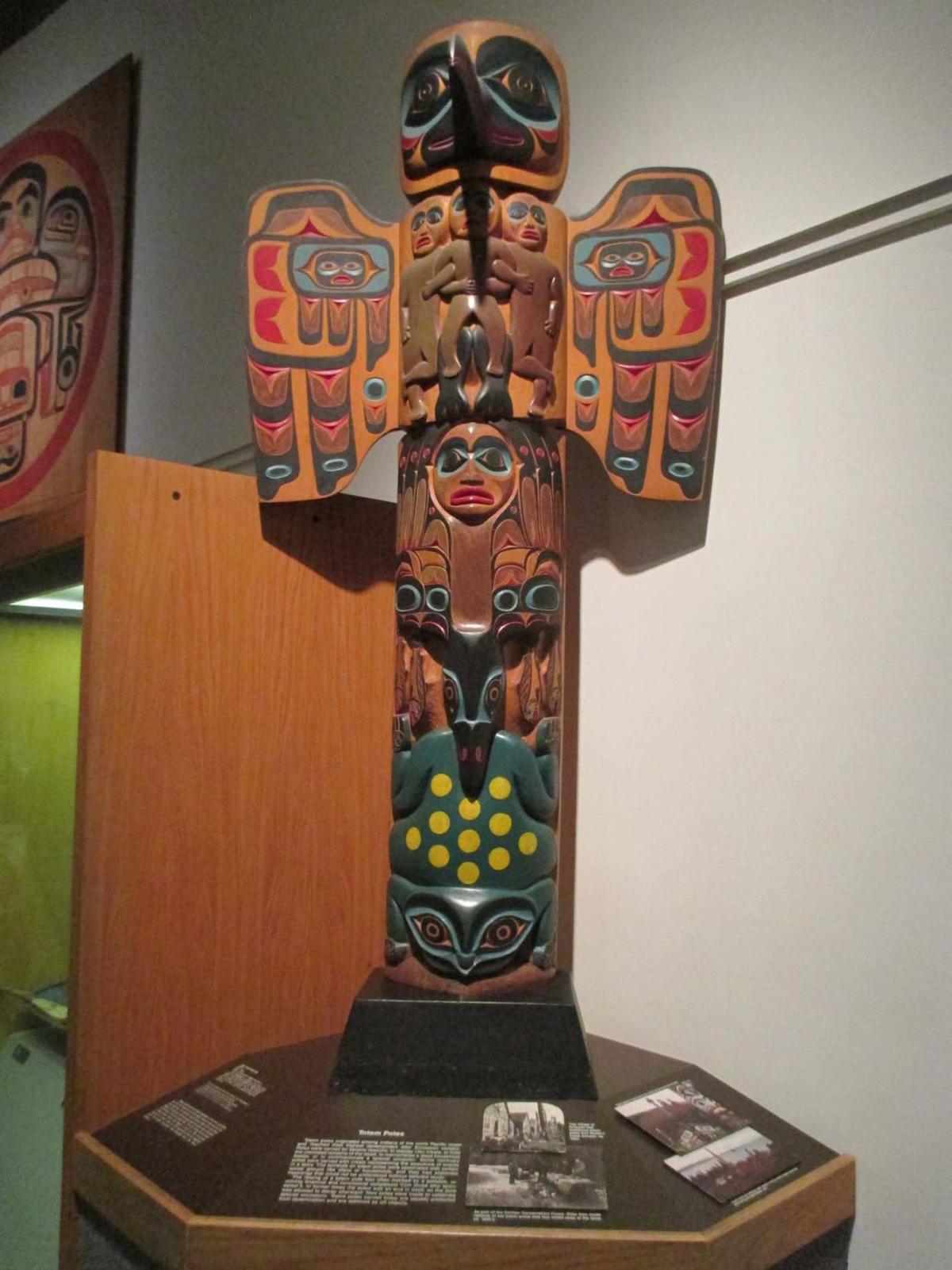 In the Gallery of Alaska, a replica of the “Sun Raven Totem Pole” is on display. The pole tells three tales about Raven. This replica was made by students at Mt. Edgecumbe in 1948. 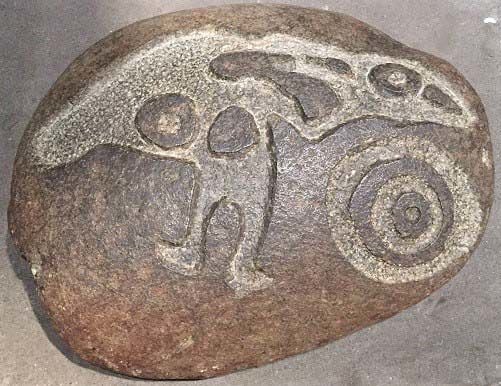 Museum visitors can touch a replica petroglyph, carved by Richard Seeganna, depicting a raven. The original stone is on Wrangell Island.

The common raven, Corvus corax, is a year-round resident of Alaska.

A raven mask by Iñupiaq artist Bernard Tuglemena Katexac of King Island is on display in the Rose Berry Alaska Art Gallery at the UA Museum of the North.

In the Gallery of Alaska, a replica of the “Sun Raven Totem Pole” is on display. The pole tells three tales about Raven. This replica was made by students at Mt. Edgecumbe in 1948.

Museum visitors can touch a replica petroglyph, carved by Richard Seeganna, depicting a raven. The original stone is on Wrangell Island.

FAIRBANKS — Ravens are an integral part of life in Alaska. The jet black birds can be found in varied environments throughout the state, from parking lots and city landscapes, to tundra, rainforest and remote islands. Each and every Alaskan can observe the raucous corvids. One likely place to spot them is around the University of Alaska Museum of the North. The architectural curves entice ravens to come and play in wind currents.

As a cultural symbol, ravens are important to many Alaskans. Raven, as a character, features in tales from various Alaska Native cultures especially Tlingit, Haida, Tshimshian, Athabascan, Yup’ik and Iñupiaq cultures. Often seen as a trickster, his character is multi-dimensional. Raven is creative and helpful, but also selfish, hungry and mischievous. He enjoys playing tricks on humans and other animals. In many stories, Raven either creates or transforms the world.

Since the raven has a Holarctic distribution, being found in all arctic countries, raven stories are common in many Arctic cultures. To the Inuit of Canada, Siberia and Greenland, Raven is a major figure, who as part human, made the world and brought light. In Iceland, the most famous ravens are Huginn and Muninn. These two, whose Old Norse names can be translated as “thought” and “memory,” fly around the world each day and sit on the shoulders of the Norse god Odin to tell him Earth’s news.

The cultural importance of ravens means that many forms of Alaskan Indigenous art and ceremonial objects depict ravens. For the Tlingit people of Southeast Alaska, all are members of one of two moieties, either Eagle (Cha’áak) or Raven (Yéil). Totem poles, carvings, clothing and regalia from the region regularly feature representations of Raven and can be viewed at the museum. Petroglyphs from Southeast Alaska show thatraven stories have been a part of the local cultures for a very long time. A replica carved stone on display in the Gallery of Alaska is a popular touchable item for children when visiting.

Ravens can be spotted in objects throughout the museum. “Spirit Raven III” is a large sculpture made by John Hoover who drew upon his Aleut heritage for his subject matter. Guests can look for a mask with raven feathers and another that looks like a raven’s face. Ravens are sewn onto a shirt and appears on a gold bracelet. The public is invited to further explore ravens during the month of March, through a series of hands-on family programs at the museum.

The ravens in Alaska, common ravens (Corvus corax), are not fairweather friends. They live here year-round. At this time of year in Interior Alaska, courtship displays that began in January are wrapping up and adult pairs of ravens are roosting near nesting locations. Ravens stay with the same mate for their lifetime.

Like many other members of the Corvidae family which includes jays, crows and magpies, ravens are known for their vocalizations and intelligence. They can mimic other birds or even sounds of human activity, such as construction site sounds. The sounds of ravens have been classified into more than 30 categories. The common gurgling croak sound can be heard up to a mile away.

The intelligence of ravens has been demonstrated in the wild and through research. Ravens are known to use tools and to solve multi-step logic challenges for reward. They have even been shown selecting tools to save for later use, such as opening a puzzle box. Ravens can recognize individual human faces. This forces researchers who study the birds to be creative about their appearance if wanting to outsmart their study subjects.

Ravens and humans are connected. They live where we do and utilize our resources. In the wild, ravens show wolves where to find carcasses or prey. The predators can tear into the animal which the ravens scavenge. Ravens also look for food sources around humans. They have become more abundant in areas where we are, such as the oil fields of northern Alaska. They even will find food caches for mountain climbers high on Denali, if not well protected.

Alaskans and ravens are intertwined. The birds are a part of our state’s natural history and cultural heritage. Through art and scientific inquiry, stories of the enigmatic trickster will continue to emerge and endure.

Discover ravens at the UA Museum of the North’s hands-on programs in March. Early Explorers, for children 5 and younger, meets in the Creativity Lab from 10 a.m. - noon each Friday except March 15. All ages are welcome to drop in during Open Creativity Lab on March 15 from 10 a.m. - 2 p.m. At Junior Curators, from 2-4 p.m. March 23, kids 6 and older are invited to explore sculpture through hands-on investigations and crafts.

Teen Studio, from 2-4 p.m. on March 23 for ages 13-18, gives participants a chance to discover cyanotypes make their own UV-activated art. Registration is required at bit.ly/uamnteenstudio.

The museum’s annual open house is noon to 4 p.m. March 30 from. The community is invited to explore behind-the-scenes. Meet curators and collections managers and see the labs and collections. Admission is free all day.

For more information about the museum’s programs and events, visit www.uaf.edu/museum or call 474-7505.

To Try At Home

• Observe ravens. Where do you see them most often? When? How do they move? Watch for acrobatic flight and listen for a variety of vocalizations. Keep track of your observations in a journal. Use notes and sketches to document your observations.

• Problem solve like a raven. Can you solve this raven challenge? A treat is floating in water but too deep in a tube to reach. How do you get it? Discuss ideas. Intelligent ravens pick up rocks with their beaks to drop in and raise the water level. Imagine other challenges to solve.

• Create storytelling puppets. Raven is a common character in Alaskan stories and art. Create your own raven puppet using a paper bag, black construction paper, or other art supplies. Get creative! Tell traditional raven stories or make up new ones.

Jennifer Arseneau is the education and public programs manager for the UA Museum of the North. She can be reached at 474-6948.