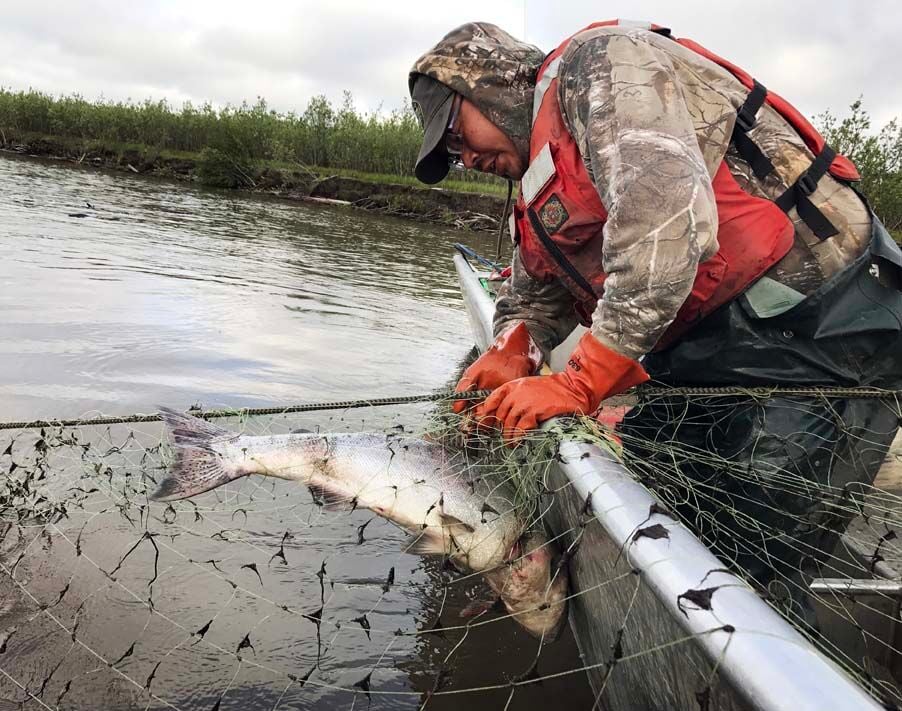 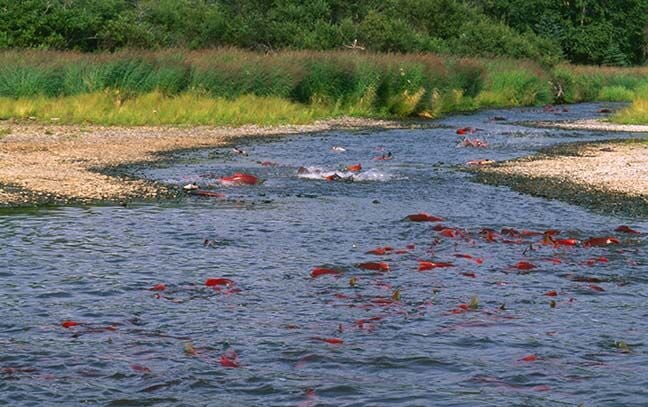 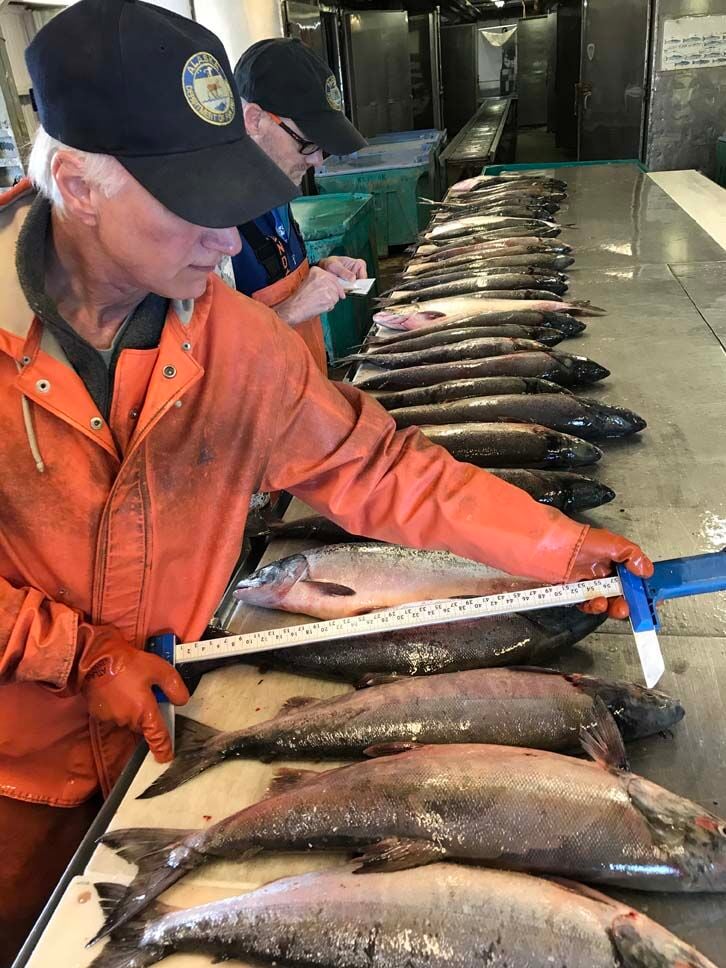 Mick Leach measures fish in the commercial fishery on the Lower Yukon River as part of Alaska Department of Fish and Game’s age, sex and length sampling program. 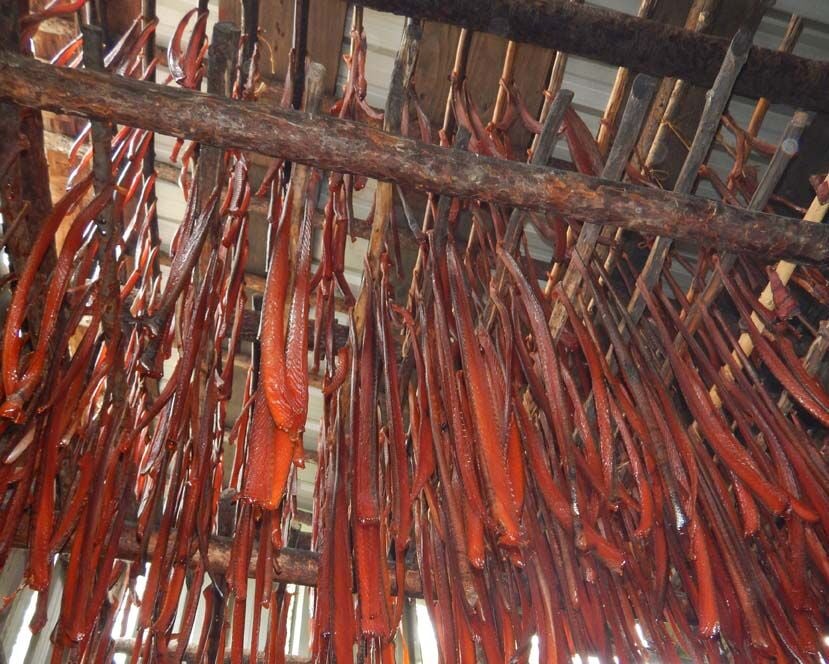 Salmon strips hang in a smokehouse on the Yukon River. Many Alaskans rely heavily on harvesting salmon for food security, and body size declines have resulted in fewer meals per fish than in the past.

Mick Leach measures fish in the commercial fishery on the Lower Yukon River as part of Alaska Department of Fish and Game’s age, sex and length sampling program.

Salmon strips hang in a smokehouse on the Yukon River. Many Alaskans rely heavily on harvesting salmon for food security, and body size declines have resulted in fewer meals per fish than in the past.

Salmon species across Alaska are returning to spawn at a smaller size, according to a study led by researchers at the University of Alaska Fairbanks.

The study, published in Nature Communications on Aug. 19, shows that body sizes are declining in four species of Pacific salmon because the fish are returning younger than they used to. The consequences of this trend will impact the people who rely on salmon for food, the commercial fishing industry and the health of ecosystems.

The researchers found that climate and competition for food at sea are important factors in body-size declines, but their impacts on salmon vary among species and location.

“For a long time, subsistence users, fishermen and scientists have noticed that salmon are getting smaller,” said Krista Oke, the lead researcher on the project and a postdoctoral fellow at the UAF College of Fisheries and Ocean Sciences. “We wanted to take a step back and look across the whole state, across different species, and get a feel for what was going on with salmon size at a broad scale.”

Oke was part of a working group of academics, tribal advocates and state and federal biologists that analyzed 12.5 million samples collected by the Alaska Department of Fish and Game between 1957 and 2018. This massive 60-year database included age and length information for four species of Pacific salmon — Chinook (king), chum (keta or dog), coho (silver), and sockeye (red). The mature fish, caught on their way to spawn, were individually measured at escapement projects, commercial fisheries and other places.

“This is a unique opportunity in that we were able to look across regions, across species and across time,” said Curry Cunningham, a CFOS assistant professor and former commercial fisherman.

“We are deeply indebted to all of the technicians, scientists and everyone else who contributed to the collection of this information. It’s invaluable,” said Peter Westley, associate professor at CFOS and principal investigator of the study.

The results of the synthesis of age and length data showed that that all four species of salmon are returning to freshwater at a smaller size than they did historically.

“For the first time, we understand that is very much driven by the fish tending to be younger,” Westley said.

The magnitude of declines varied among regions and species. The largest species of Pacific salmon, Chinook, showed the highest average body size decline at 8 percent, compared to declines of 3.3 percent for coho, 2.4 percent for chum, and 2.1 percent for sockeye. For all four species, the rate of decline has accelerated since 2010.

The consequences of smaller returning salmon reach far and wide. This study is unique in that it translates changes in salmon size into something more tangible. For example, Chinook salmon showed reductions of 16 percent in egg production, 28 percent in nutrient transport back to rivers, 21 percent in fisheries value, and 26 percent in meals for Alaskans.

“The Arctic-Yukon-Kuskokwim area is the biggest subsistence user group in the country,” said coauthor Gale Vick, a former commercial fisherman representing the Tanana Chiefs Conference tribal consortium. “The dependency of that group on the resource is huge. It’s not just a commercial dependency — it’s a food security issue.”

The question still looms as to why salmon are returning younger. “It could be that fish are not living long enough to return at older ages. There could be a selective mortality force in the ocean that removes the oldest individuals, so they don’t survive to return. Or it could be in part that fish are maturing younger on average,” said Cunningham.

The researchers looked at hypothetical causes, including warming oceans, increases in wild and hatchery salmon abundance and size-selective fishing. Both climate and competition appear to be influencing salmon body size, but their impacts varied across species.

“The overarching result is that there is no single smoking gun to explain why this is happening,” said Oke.

Data to test the role of selective fishing was only available for a few species in a few regions. With this limited information, the study did not suggest a key role of fishing on salmon body-size declines. However, “At the very least selective fishing against the biggest fish is not helping,” Westley said.

The group hopes that the study can help focus future research. “What this shows very clearly is that protecting freshwater habitats alone is not sufficient to avoid changes like what we are seeing. There has to be more recognition in the role of a shared ocean,” said Westley.

The working group behind the study was organized by the National Center for Ecological Analysis and Synthesis, and University of California Santa Cruz associate professor Eric Palkovacs was co-lead researcher on the project. The work was funded by the Gordon and Betty Moore Foundation and Nautilus Impact Investing.

Alice Bailey is a public information officer and R/V Sikuliaq Science Liaison at the College of Fisheries and Ocean Sciences at the University of Alaska Fairbanks. She can be reached at alice.bailey@alaska.edu.