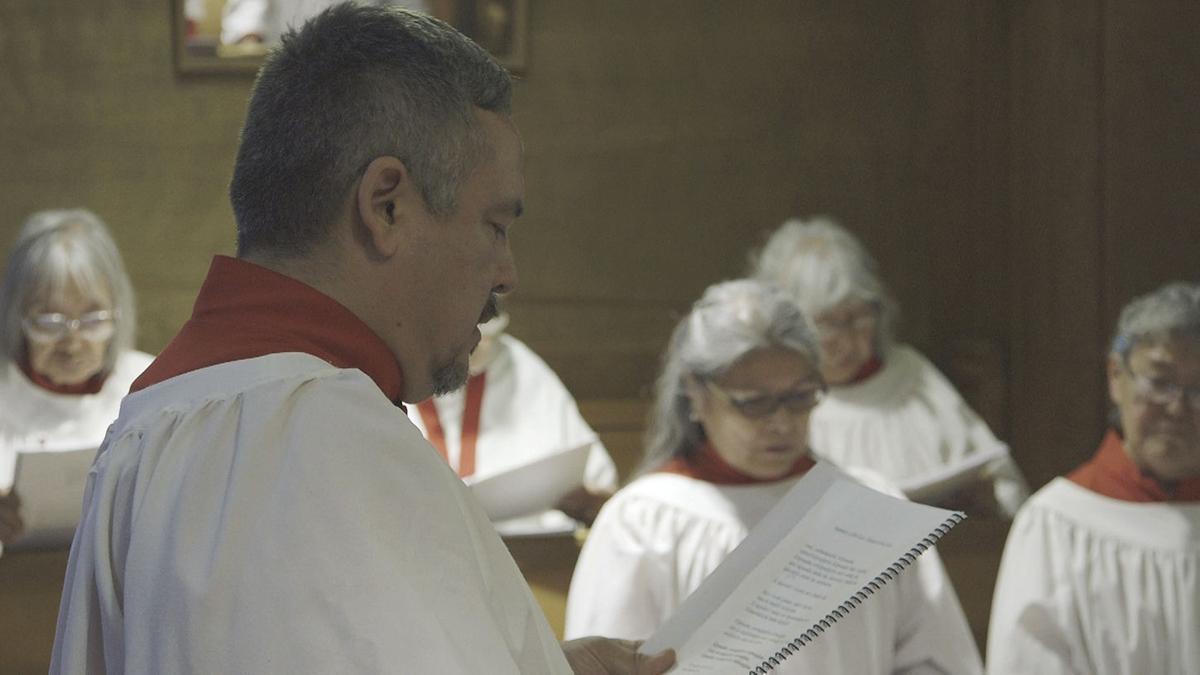 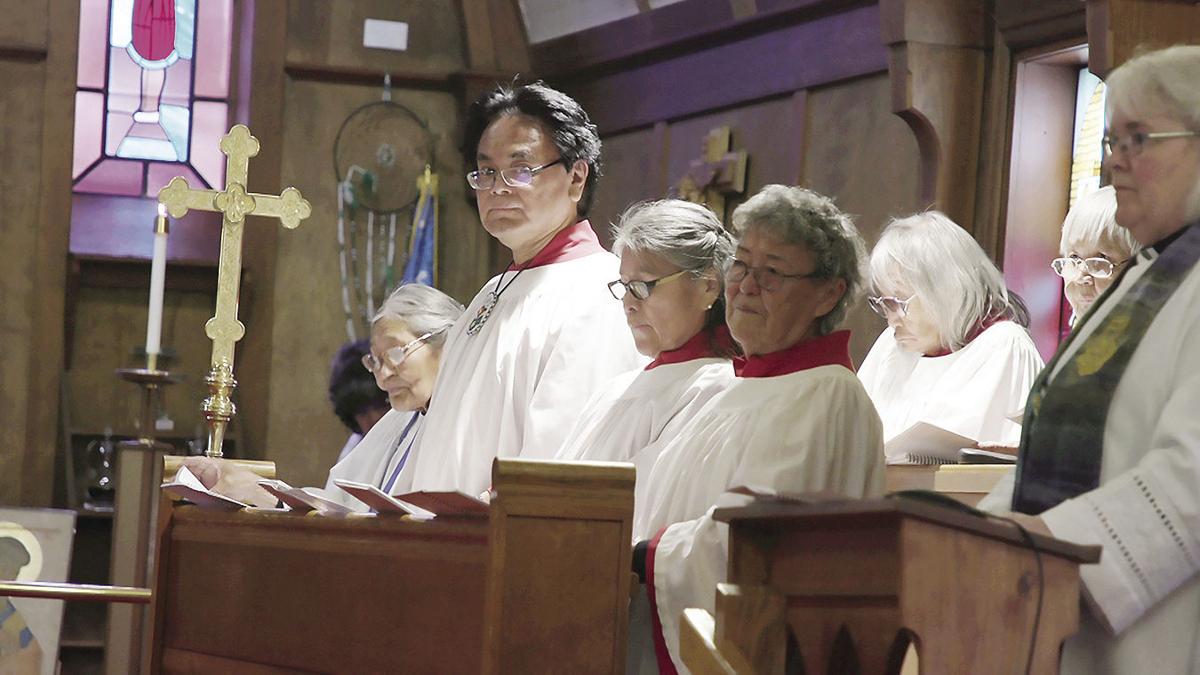 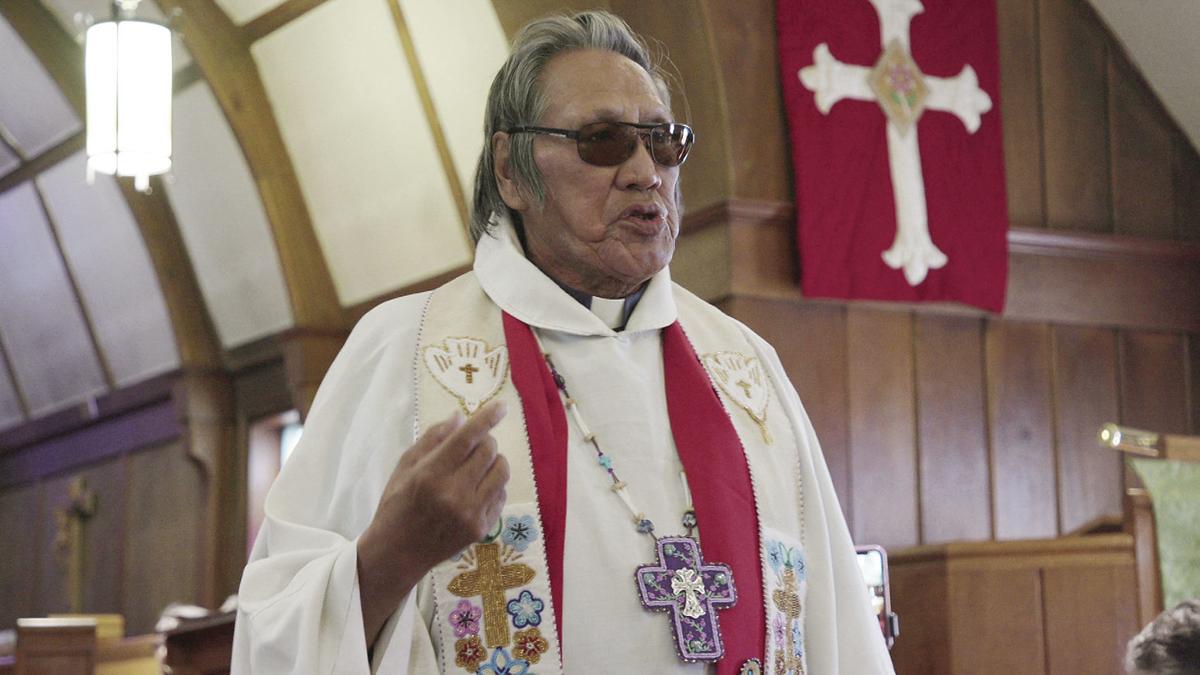 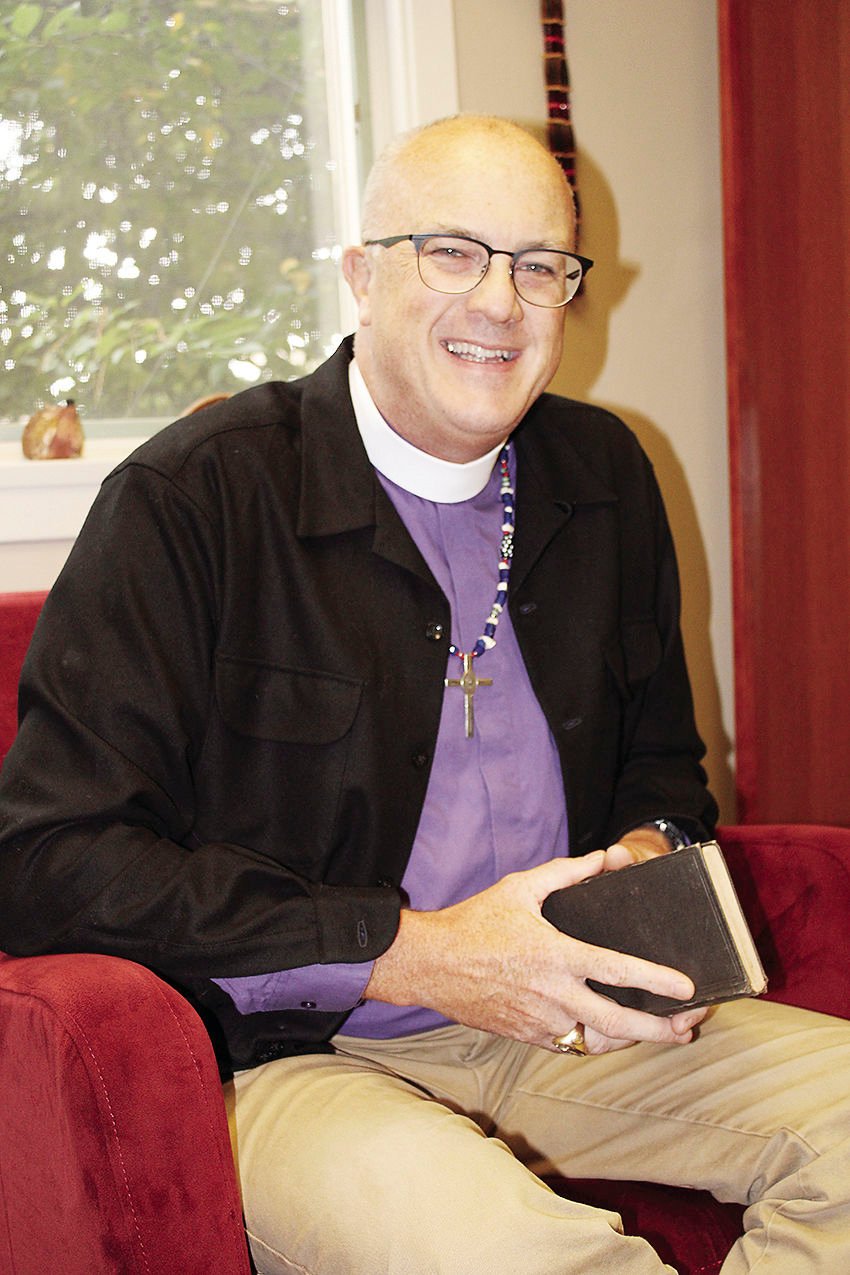 Mark Lattime, bishop of the Episcopal Diocese of Alaska, is pictured with a Takudh version of the Book of Common Prayer translated from English in the late 19th century. Nancy Tarnai photo

Mark Lattime, bishop of the Episcopal Diocese of Alaska, is pictured with a Takudh version of the Book of Common Prayer translated from English in the late 19th century. Nancy Tarnai photo

Work is in progress for a new resource that will help Gwich’in speakers use their Native language in worship services.

Via a $40,000 grant from the Episcopal Church’s United Thank Offering, Bishop Mark Lattime kickstarted the project, and Alaska Native language experts and elders are translating the most frequently used section of the Book of Common Prayer.

“We are committed to the idea that worship should be done in the language of the people,” Lattime said. “We want this resource in the pews.”

To make that happen, Allan Hayton, a project leader, is working with Native elders for whom Gwich’in is their first language. The language was first translated and written by Archdeacon Robert McDonald of Canada in the late 1890s. “He was an extraordinary person,” Lattime said. “He had a gift for linguistics.”

Not only did McDonald take the Takudh (older form of Gwich’in) spoken tongue and write it down for the first time, he translated the Bible and the Book of Common Prayer into Takudh. But today those translations don’t match the Gwich’in spoken by Native people of some Interior Alaska communities.

When St. Matthew’s Episcopal Church in downtown Fairbanks held a Takudh Holy Communion service in 2014, many elders and speakers expressed a desire to have the service adapted into Alaska dialect. Hayton said, “The Takudh translation Archdeacon McDonald did with the Old and New Testament, hymns and Book of Common Prayer are venerable and cherished by our people, but there can exist a barrier for speakers who do not read or write the language. The hope was we could adapt Rite II into Alaska dialect and make the service more accessible for people today.”

Hayton said the Takudh tradition begun by Archdeacon McDonald and his Gwich’in translators is something he and elders deeply desire to continue. “Many generations have grown up singing and worshipping in Takudh, but it is fading as we lose more and more of our first language speakers. We do not want to lose touch with prayer, with singing, with the holy.”

The process of updating and translating is laborious but enjoyable. Hayton works with elders such as the Rev. Trimble Gilbert, Irene Roberts, Florence Newman, Connie Newman and Kenneth Frank to update each word and phrase of the Takudh version into Gwich’in. The work is challenging, Hayton said. “Many of the concepts expressed in the Takudh translation can be vast and far reaching or obscure, and it takes time to grapple with these ideas and encapsulate them in the modern Alaska dialect. Our lives today are also very rushed and it can be difficult to find time to truly focus on the translation work.”

While some Native languages are threatened with extinction, Gwich’in is one that is staying in everyday use. A Gwich’in service was held at St. Matthew’s in August and while it didn’t draw a packed house, Bishop Lattime was encouraged that people of all ages attended. He is learning Gwich’in with the help of Gwich’in grandmas.

“Language is so important,” he said. “Language is how we relate to the world. All of life is filtered through how our language works.”

Loss of language is a genocidal act, Lattime said. “It’s a loss of human identity. We are impoverished as a people when a language is lost and a way of relating is removed from our plate. Language needs to be nourished and preserved and encouraged.”

He ruminated over some of the mistakes the church has made. “In the past we have not done as good a job listening and learning as imposing and that’s sad,” he said.

While the current project is slowly moving forward, Lattime has visions of eventually doing similar work with other Native languages. “I would love to eventually see a Book of Common Prayer with all Alaska languages in one book so when we gather most languages are represented.”

As for Hayton, he dreams that future generations will be able to pick up the prayers and passages and incorporate them into their lives in a meaningful way.

“My hope is to develop learning and teaching methods that can help learners pick up our ancestral languages,” Hayton said. “There are 20 Alaska Native languages, and each of them is endangered to varying degrees. I am heartened when I see a person begin to discover themselves in their language. There is a strong connection that is made when someone begins their language learning journey. As we grow in the language we learn more about our ancestors, the land, animals, beliefs, knowledge and most importantly we find connection to our Creator.”

The rector at St. Matthew’s, the Rev. Betty Glover, said, “St. Matthew’s supports this work and the way we are currently trying to include Gwich’in as part of our liturgies. It’s important to keep the ancient languages alive.” She said that when she conducts services that incorporate the Lord’s Prayer in Gwich’in, people are so appreciative and some have approached her with tears of gratitude.

Trimble Gilbert, one of the elder advisors for the project, said, “I think we might be too late but we can’t give up.”

Nancy Tarnai, a local freelance writer, has been covering Interior Alaska lifestyles for the News-Miner since 1995. She can be reached at njtarnai@gmail.com.