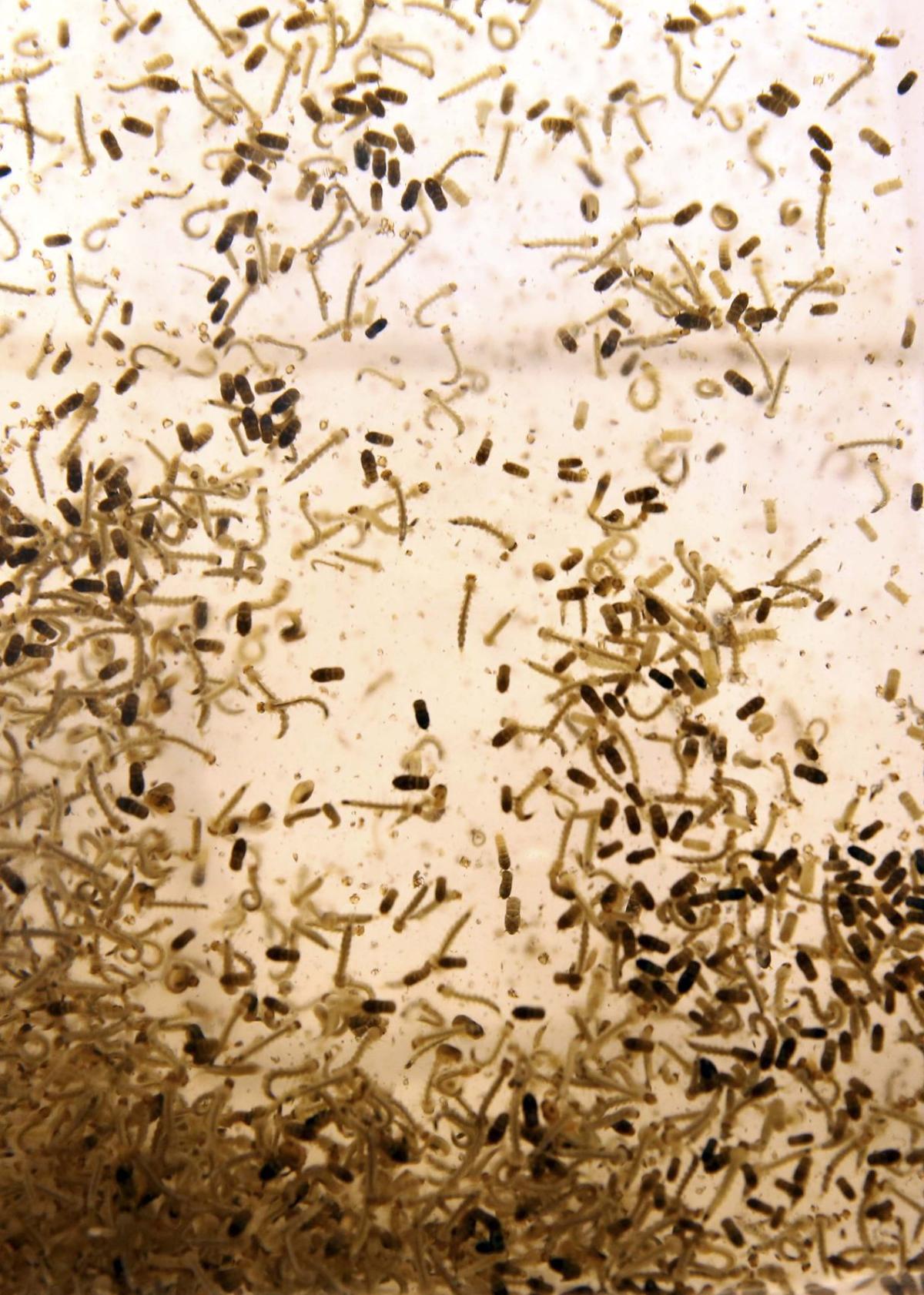 A lone female lays up to 3,000 eggs of which 80 percent hatch and 600 survive. An adult mosquito can live about seven months 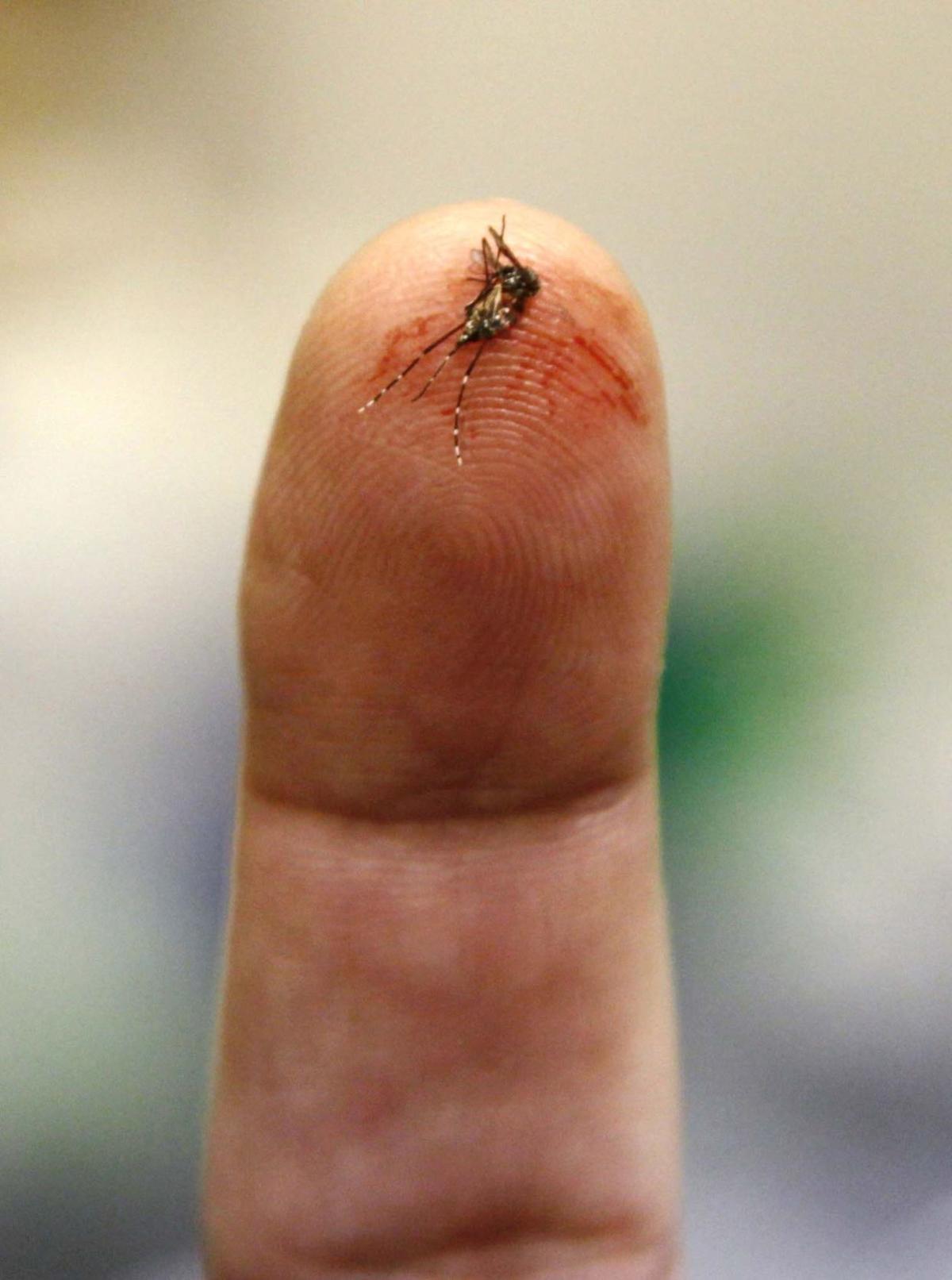 Adult males mosquitoes feed on plant nectar. Adult females feed on vertebrate blood to produce eggs. Only one blood meal is required per brood of eggs. 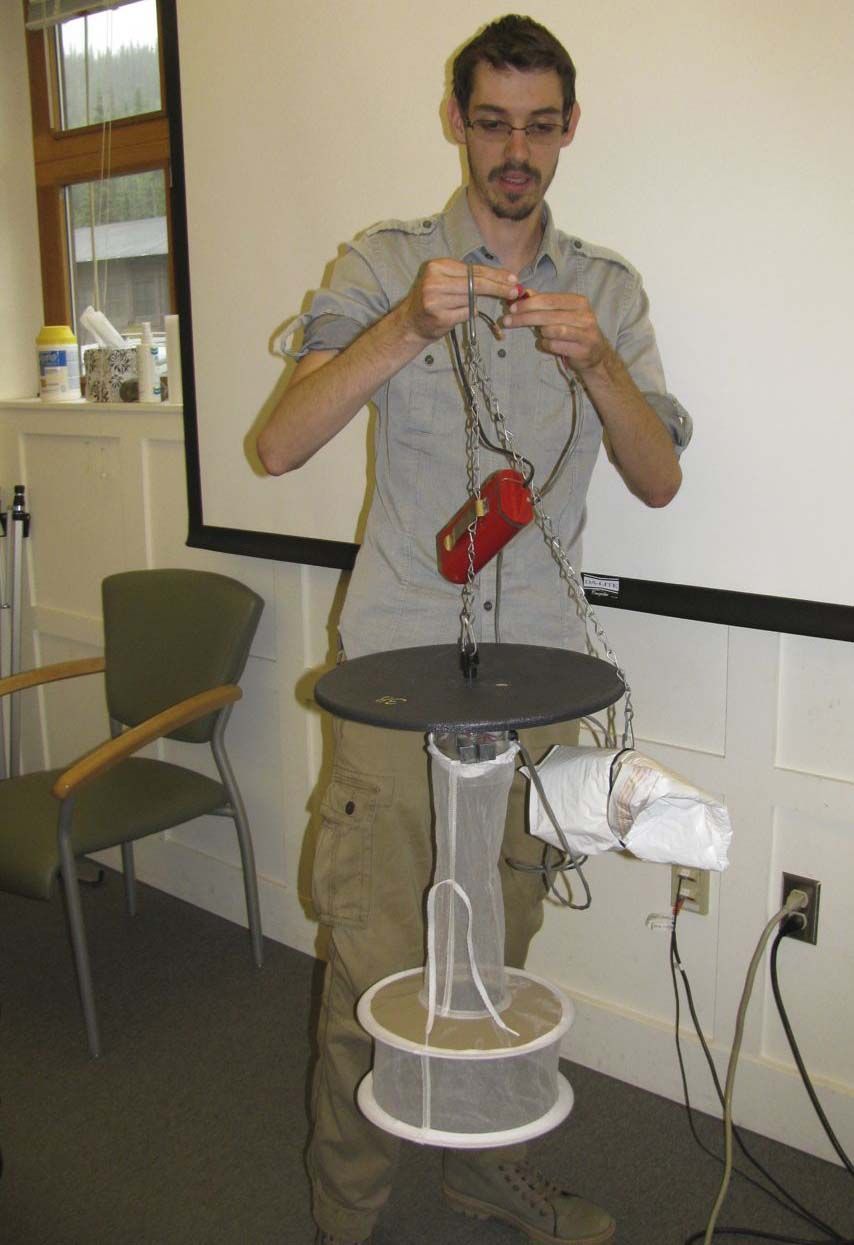 Andrew Guinness displays the contraption he uses to capture live mosquitoes for his research.

A 1961 state study determined there are 32 species of mosquitoes in Alaska. At least 15 of those species are in Denali National Park.

DENALI PARK — All hail to the mighty beavers at Horseshoe Lake. It’s because of them that there are no clouds of mosquitoes pestering park visitors at that popular body of water.

Visiting entomologist and mosquito researcher Andrew Guinness came to this conclusion last week after wondering why there were so few mosquitoes at the lake. The beavers, he concluded, disturb the water just often enough to drown the mosquito larvae. Each larvae has a respiratory siphon that allows it to breath as it develops. When that little siphon is continually covered by a wave or a splash, the larvae drowns.

That is just one of many revelations the researcher shared with a group of park scientists last week. Guinness is a biologist and entomologist from Iowa State University who specializes in mosquito surveillance. He has a particular interest in medical entomology — studying insects that spread diseases. Mosquitoes, of course, fall into that category.

A grant from Denali Education Center allowed him to spend 10 days at Denali National Park, surveying mosquito biodiversity in Denali. The last time this mosquito research was done in Alaska was in 1961, he said. Since he was addressing a roomful of scientists, there was plenty of scientific jargon. I tuned in when he described the mosquito as having a “piercing sucking mouthpart — the only thing that makes it different from crane flies and non-biting midges.”

Guinness trapped live mosquitoes with a contraption that used dry ice, giving off carbon dioxide to attract them, and then a fan to blow them into the net. A pound of dry ice lasts through the night and into the morning, he said.

Contrary to what we might think, it was slim pickings. When he captured only 80 mosquitoes one night, he was stunned. Another night, he only caught one. A summer drought has likely decreased numbers of mosquitoes, he said. People who report fewer mosquitoes at Wonder Lake, usually a notorious mosquito-filled place, are right. However, the mosquitoes he has seen here are memorable.

The 1961 study determined there are 32 species of mosquitoes in Alaska. At least 15 of those species are in Denali National Park.

The largest mosquito in North America is also here — the snow mosquito. These are the big slow ones that are the first to emerge when spring and summer arrives. They overwinter as adults, going dormant under the snow and then emerge at the new season. It’s not the biggest mosquito in the world, however. That insect is in Australia and is called an elephant mosquito, about the size of a half-dollar coin. Luckily, it doesn’t feed on blood. Two elephant mosquitos were discovered in 2008 in Arizona and New Mexico.

Mosquitoes lay eggs on or near water. Floodwater mosquitoes are the ones that hatch after a rain or in rising waters, and they hatch en masse.

“That’s why you get clouds of mosquitoes,” he said. “And that’s why there are no terrible mosquitoes this year. You’re in a drought.”

Adult males feed on plant nectar. Adult females feed on vertebrate blood to produce eggs. Only one blood meal is required per brood of eggs. And there’s only one to 1.5 generations of mosquitoes per summer. So there may be multiple hatches but not multiple generations.

A lone female lays up to 3,000 eggs of which 80 percent hatch and 600 survive. An adult mosquito can live about seven months, and here is a big shocker: mosquitoes can fly up to 300 miles searching for a blood meal. It could be a person, a bear, a bird, a squirrel — just about anything.

“I would argue that there is probably a mosquito that feeds on the wood frog,” he said. “Mosquito ecology is most important in tundra climates. Birds could decrease as much as 50 percent without mosquitoes as a food source.”

Mosquitoes play a substantial role in caribou migration. Caribou migrate into the wind to avoid mosquitoes. Research shows that caribou can lose 300 milliliters of blood per caribou per day to mosquitoes during migration.

“When mosquito larvae feed on organic matter in standing or slow-flowing waterways, it maintains lower levels of gunk for other organisms,” Guinness said.

And then the mosquito expert burst a few bubbles regarding mosquito lore. Do high-pitched auditory repellents work? No. How about citronella candles? No. Essential oils? “Instead of four mosquitoes or three mosquitoes, you might get a smaller density,” he said.

His advice: wear long sleeves, long pants, all cotton. The only mosquito repellant that works really well, he said, is DEET.

“It only works if you apply it before they find you,” he said. “It disrupts the olfactory cue.”

If they are already biting, don’t bother with DEET. It’s too late.

Different species of mosquitoes like different plants. One flower they really like? Marigolds. Also, mosquitoes are morning and evening biters. They don’t like to fly when it is raining.

As for mosquito-borne disease, Alaska has been relatively lucky on that front. Iowa already has discovered two new mosquito species from Japan that bred in shipping containers.

He advised homeowners to manage mosquito populations by getting rid of standing water as every mosquito has its own special breeding preference. It could be slow-moving water, stagnant water, slop buckets or flood waters.

And my favorite questions:

How do mosquitoes make that annoying buzzing sound? The buzz comes from their wing vibrations, which average 120 flaps per second.

Some bison have been found to suffer severe anemia from mosquitoes, which led to the question we always wonder: Could a human lose enough blood from mosquitoes to actually die? Picture someone naked on the Yukon Flats, asked a questioner.

“Is it possible under the right circumstances? Yes,” Guinness said. But is it likely? No.

Reach community editor Kris Capps at kcapps@newsminer.com, at the desk at 459-7546 or by cell at 322-6334. Follow her on Twitter at twitter.com/FDNMKris.