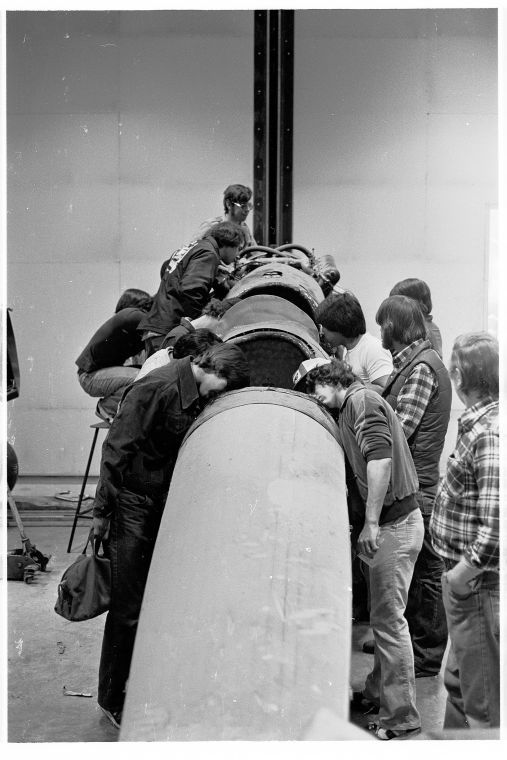 Airplane mechanic students at Hutchison Career Center investigate the Jenny in 1981 during the recondition phase. Photo by Everett Long 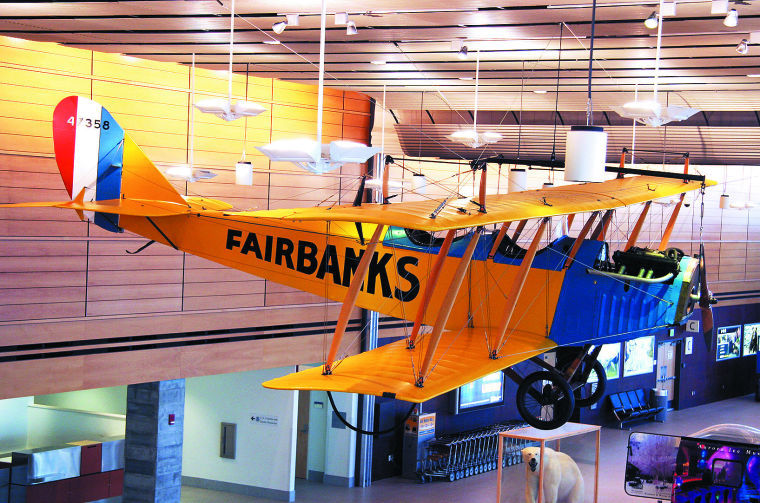 The newly-restored Jenny soars again over travelers in the baggage terminal of the Fairbanks International Airport. The Department of Transportation, along with officials from the Fairbanks International Airport, EAA volunteers and Davis Construction, the original contractor for the recent expansion at FAI, completed the installation in October 2013. Photo by Theresa Bakker

Airplane mechanic students at Hutchison Career Center investigate the Jenny in 1981 during the recondition phase. Photo by Everett Long

The newly-restored Jenny soars again over travelers in the baggage terminal of the Fairbanks International Airport. The Department of Transportation, along with officials from the Fairbanks International Airport, EAA volunteers and Davis Construction, the original contractor for the recent expansion at FAI, completed the installation in October 2013. Photo by Theresa Bakker

FAIRBANKS — Visitors new to Fairbanks may not have noticed the empty space above the baggage terminal at the Fairbanks International Airport. But locals sure did. Even with the facility’s expansion completed in 2009, something was still missing.

“People asked me all the time,” Pete Haggland said. “Where is the Jenny?”

As the Director of the Pioneer Air Museum, Haggland has been instrumental in keeping the stories of Fairbanks’ aviation history alive. He’s the one who raised $25,000 in 2007 to begin the project that would restore the historic Curtiss JN-4D, an aircraft know as the Jenny, to its original profile.

“Not only the wings were wrong, the rest of the aircraft needed work to bring it up to standard,” he said.

It took the combined effort of dozens of volunteers and thousands of hours of work to finish the project. Headed by Roger Weggel, an instructor in the University of Alaska Fairbanks’ aviation department and member of the local chapter of the Experimental Aircraft Association, the Jenny was returned to airworthy condition for the first time in more than 70 years when it was hung in the airport at the end of October.

Weighing almost 1,500 pounds, with new bright yellow wings spanning 44 feet, the airplane is a symbol of a community that has long been proud of its role in aviation history.

A plane for Fairbanks

For nearly 90 years, the Jenny has served the community of Fairbanks, first as an airborne vehicle and then as an icon of aviation history.

The Curtiss JN-4D was one of a series of biplanes built by the New York-based Curtiss Aeroplane Company as training aircraft for the U.S. Army. It was the country’s most famous World War I airplane. Some were equipped with machine guns and bomb racks for advanced courses, although none saw combat. After the war, thousands of surplus aircraft like the Jenny were sold at bargain prices to private owners. That move was instrumental in helping establish civil aviation in America.

Pilot Carl Ben Eielson realized his dream of becoming an aviator thanks to the war. He learned to fly in the U.S. Army Air Service, but the fighting ended while he was still in flight training. He arrived in Fairbanks in 1922 to be a teacher and became known worldwide for flying the first airplane across the Arctic Ocean in April 1928.

But first he needed a plane. In 1923, he persuaded a group of Fairbanks businessmen to purchase the Jenny for $2,400. He turned a profit within a week, giving demonstration flights to curious onlookers. The plane flew goods, people and the first airmail to communities around Fairbanks.

The experience was nothing like what we’ve come to expect from modern aviation, Haggland said. With no brakes, stopping meant aiming for a nice bush.

“Those guys were the real bush pilots,” he said.

Takeoffs and landings were notoriously bumpy. There were no maps. And no heater in the cockpit.

“There was no one else around when Eielson flew the Jenny,” Haggland said. “No maps, no radios, no weather reports. This was seat-of-the-pants bush flying.”

Eielson used the Jenny in February 1924 to fly the first airmail in Alaska from Fairbanks to McGrath. The 260-mile trip lasted four hours, a distance that would have taken a working dog team 20 days to cover.

After his return from the flight across the Arctic Ocean, Eielson helped establish the Fairbanks Airplane Corporation, but he died in an airplane crash on Nov. 9, 1929, in Siberia. Joe Crosson, one of Eielson’s business partners who became a national hero flying mercy missions in the North — including the search for Eielson himself — purchased the Jenny and continued flying it into the next decade.

Mystery at the museum

One of the biggest mysteries about this particular aircraft has been how the University of Alaska Museum of the North came to possess it. There was speculation that it had been moved to the UAF campus after a fire at Weeks Field. The exact date and circumstances of the museum taking over the care of the plane had not been preserved, although the museum’s records dated back to 1967, documenting the Jenny’s loan to the Alaska 67 Centennial Exposition (the original installation of Pioneer Park).

When the plane was first installed at Fairbanks International Airport in 1981, it was thanks to the 1957 efforts of a host of Air Force mechanics who moved it to a storage facility at Eielson Air Force Base while a cosmetic overhaul was completed. They attached wings from another type of biplane. For that and other reasons, local aviation buffs had long dreamed of restoring Eielson’s plane to its original aesthetic.

By October 2013, with the completion of the Jenny Project, the museum’s ethnology and history collection manager had spent hours combing through the museum’s records and talking to people who knew about the Jenny. Several weeks later, Angela Linn was looking up aviation history details for a museum patron when she discovered a photo from the George King collection.

“I recognized the nose of that plane right away! It was the Jenny,” Linn said. “The Jenny has this distinctive shape to the fuselage and the image just jumped out at me.”

It turns out that one of Eielson’s business partners had visited the Jenny on the university campus in 1958. A photo of the reunion is included in the Alaska and Polar Regions Collections and Archives at the Rasmuson Library, along with a University of Alaska press release noting the plane had been donated to the museum by the Fairbanks Airplane Corporation, which was created by the merger of the two existing airline corporations in town.

With a bit more digging, Linn found a July 1, 1934, article in the Farthest-North Collegian about the fundraising and construction efforts surrounding the building of the Eielson Memorial on the campus of the Alaska Agricultural College and School of Mines, which later became UAF.

According to that article, “The first airplane used by Colonel Eielson in Alaska has been donated to the College. The Committee can well afford to see that this pioneer plane is permanently placed in a room reserved for that purpose on the main floor (of the newly constructed Eielson Memorial building).”

The plane-sized room in the Eielson Building never materialized, and the Jenny was placed in a warehouse, the only building on campus that could harbor such a large item. In 1934, the museum collections were just being established. Artifacts from St. Lawrence Island were being cataloged in the gymnasium and exhibited there. When the Eielson building was finally enclosed by that winter, the museum found its home. But the Jenny would have to wait.

Caring for our history

That’s the thing about a museum. It cares for the objects and specimens that tell our collective history. It holds the secrets and the public stories, the tales of the important and the every day. It holds these things safe until the time is right to bring them into the light.

“We are so grateful to the community of aviators and aviation historians in Alaska who have cared for the Jenny in both physical form and story,” Linn said. “It’s more than one person. It takes a shared vision to a ccomplish this kind of feat.”

Aviation is an American experience. It’s also uniquely Alaskan, a story of people pushing into another frontier, this time not even bound by the laws of gravity.

The return of the Jenny to the Fairbanks airport is the perfect way to finish the centennial year of aviation in Alaska. It was in July 1913 that the first flight launched from where the Noel Wien Public Library sits today. But it won’t be the last time we benefit from a moment in history.

Theresa Bakker is the media coordinator for the University of Alaska Museum of the North.