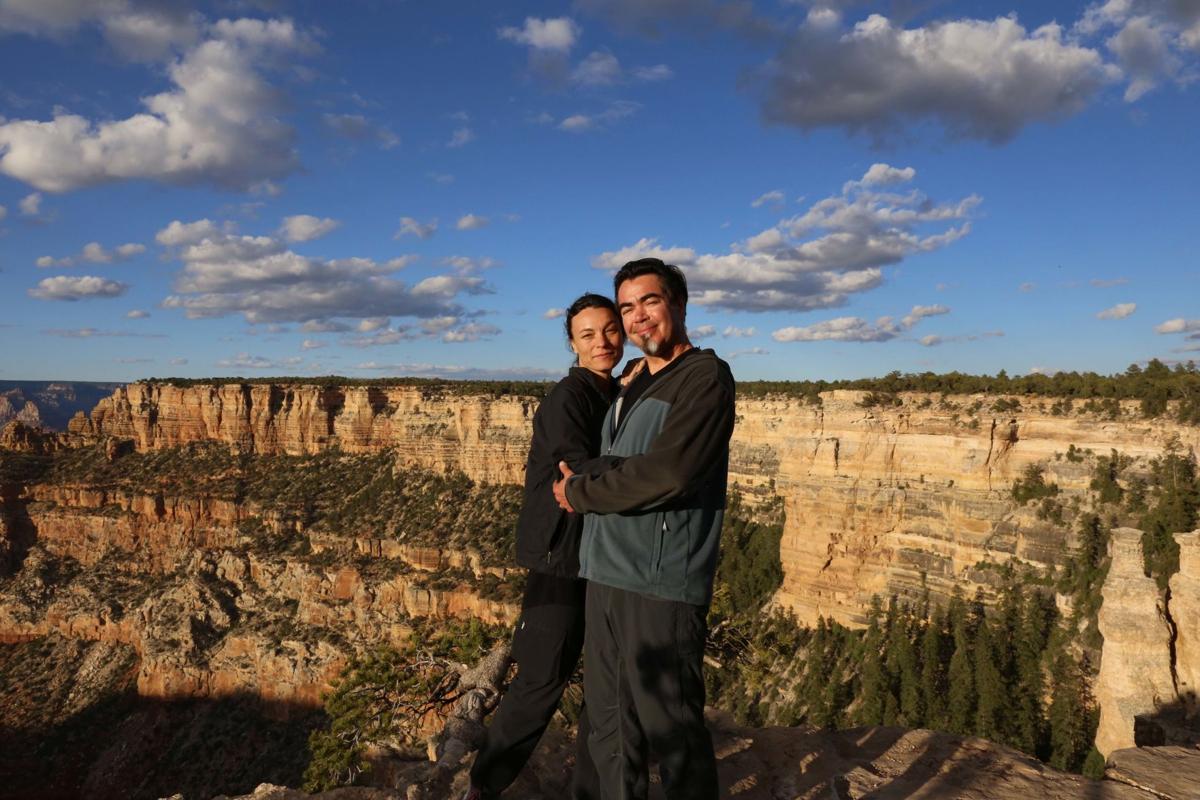 Artists and creators Da-ka-xeen Mehner and Maya Salganek share a passion for their respective crafts. The couple, also husband and wife, is seen here at the Grand Canyon in 2016. 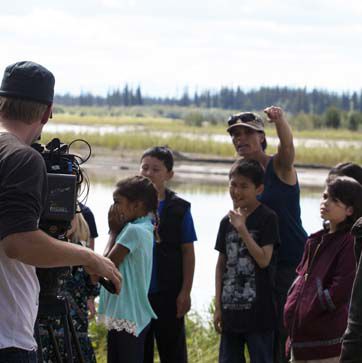 Maya Salganek, a filmmaker teaching at the University of Alaska Fairbanks, directs young actors while on set.

Da-ka-xeen Mehner's 2012 Anchorage Museum exhibit "Finding My Song" included drums with his face emerging from them and addressed the cultural displacement forced on Tlingit people by the arrival of Europeans.

Artists and creators Da-ka-xeen Mehner and Maya Salganek share a passion for their respective crafts. The couple, also husband and wife, is seen here at the Grand Canyon in 2016.

Maya Salganek, a filmmaker teaching at the University of Alaska Fairbanks, directs young actors while on set.

Da-ka-xeen Mehner's 2012 Anchorage Museum exhibit "Finding My Song" included drums with his face emerging from them and addressed the cultural displacement forced on Tlingit people by the arrival of Europeans.

"A lot of times artists pose the question, is this the way life has to be,” Da-ka-xeen Mehner noted, discussing his role as artist and instructor. “I don’t think artists necessarily have those answers, but it’s a way for us to stop and reflect on those questions. And right now there’s lots of questions.”

“I think our work is cut out for us right now on a much higher level,” his wife, filmmaker and fellow instructor Maya Salganek, added. “Because how we connect has been taken for granted.”

The couple has had tremendous influence on the arts in Fairbanks, as contributors and as mentors on the University of Alaska Fairbanks faculty. Mehner is assistant professor of Native Arts and director of the Native Arts Center, while Salganek, an assistant professor in the Department of Theater and Film, founded the first film degree program in Alaska. And while they work in differing areas, they constantly influence each other as they help Alaskans explore Native and other identities in the far north.

Mehner was born and raised in Alaska. The son of a Tlingit mother and a father he calls “a hippie,” he grew up in Fairbanks and Anchorage learning both cultures. As a child, he always created art. “I never thought of another career for myself. I always was an artist,” he said.

In the early 1990s, Mehner moved to Santa Fe to attend the Institute of American Indian Arts where he earned his A.A. Then he headed to Albuquerque for his MFA from the University of New Mexico Art Department. It was there in the darkroom that he met fellow student Salganek.

Salganek was born in New Mexico. “My parents met in Greenwich Village and broke down in Santa Fe,” she said. In that vibrant and heavily artistic town, “I grew up speaking Spanish and always identified with the New Mexican cultures.”

The couple based themselves out of Albuquerque for the remainder of the decade, where Mehner was involved in a gallery that was artistically successful, but struggled financially. “We were artists, and we were running it like artists,” he said.

In 2000, Mehner headed back to Fairbanks, with Salganek alongside. He was soon pursuing an MFA at UAF in the Native Arts Center under Alvin Amasom. “It was a great experience working with him,” he recalled.

Salganek, meanwhile, went to work on a visual anthropology master’s and immersed herself in Alaska Native cultures. This was when she found her direction. Rather than tell stories that weren’t hers to tell, she sought to facilitate the work of those who owned the stories by helping emerging writers and directors bring their ideas to the screen.

“A lot of the things I was interested in couldn’t be represented,” she said. “I thought it was wrong to represent these things in published textbooks or articles that didn’t have anything to do with the people they came from. So I found that filmmaking was the way to include and discuss that work.”

She continued, “My own personal work has often been about amplifying the voices of creative people. I’m more of a producer.”

Both earned their master’s degrees in 2007 and joined the faculty. Amasom retired that year, and Mehner took over directorship of the Native Arts Center. Salganek started pushing for the University to begin offering a film degree, which was approved in 2011 (owing to budget cuts, it’s recently been wrapped into the theater department).

Mehner’s work is influenced in part by his time in New Mexico, where there is a long tradition of contemporary Native arts. He said he feels, “the work that I do is part of the tradition, that I am adding to the culture, and it is a continuum of that tradition. I’ve come to consider myself a traditional artist, but in a modern context, doing it my own way.”

This is seen in his 2012 Anchorage Museum exhibit “Finding My Song,” which included drums with his face emerging from them, and addressed the cultural displacement forced on Tlingit people by the arrival of Europeans.

“This entire installation is moving through the acknowledgement of loss of language with those elements that we still use,” he explained. “Those groups of masks at the back were video projections of myself singing our clan songs. It was just me repeating the song over and over again, but as a way to bring in cultural practice into my artistic practice, and a responsibility to culture and song and needing to know those songs.”

Salganek, meanwhile, coproduced the 2008 dark comedy “Chronic Town,” set in Fairbanks in the dead of winter. “That was the first project I worked with students directly into film production with,” she said, “and we went straight into Sundance.”

In 2011 she produced “Alaskaland” for director Chinonye Chukwu. The daughter of Nigerian immigrants, Chukwu used the film to explore her experience growing up black and African in Fairbanks. Chukwu went on to direct “Clemency,” for which she was the first black woman to win the U.S. Dramatic Grand Jury Prize at Sundance.

Salganek has also been involved with the popular PBS children’s show “Molly of Denali” through her production company FRAME, operated through UAF. “I feel like a caretaker of stories as a filmmaker, that I’m given stories. How are we taking care of them and how are we sharing them?”

The current unrest over racial discrepancies, coupled with the pandemic, has both Mehner and Salganek, who explore cultural identity through their work, thinking about the future. “We have relationships around the arts that bring people together,” said Mehner. “And the arts also can be a very healing time, for practice or for the viewing. I think both of those are desperately needed in our society right now.”

“Once the dust has settled,” added Salganek, “there’s going to be an incredible opportunity to see what people have made during this time. I hope people are taking advantage of this time to let themselves be artists.”