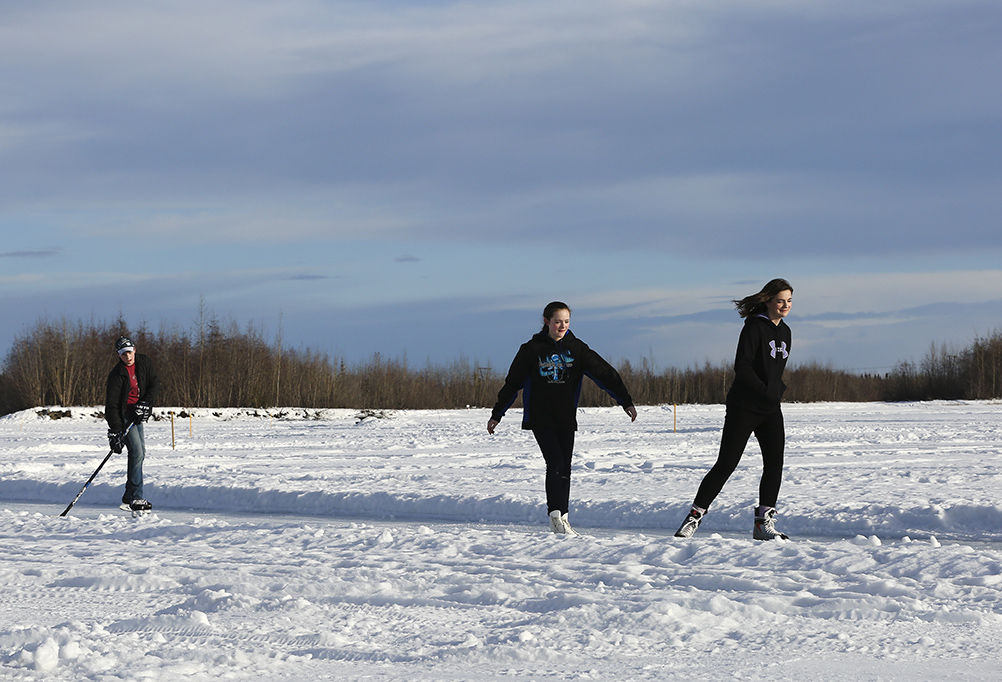 Siblings Mikayla Skellie, 17, right to left, Liberty Skellie, 11, and Benjamin Skellie, 14, ice skate around the skate loop at Tanana Lakes Recreation Area on Friday, February 26, 2016. They were there with their mother Angela Skellie. 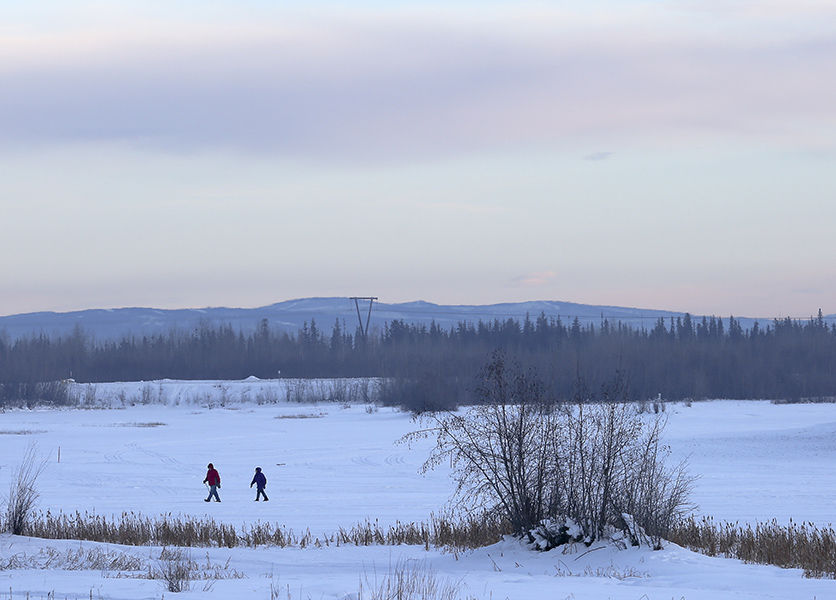 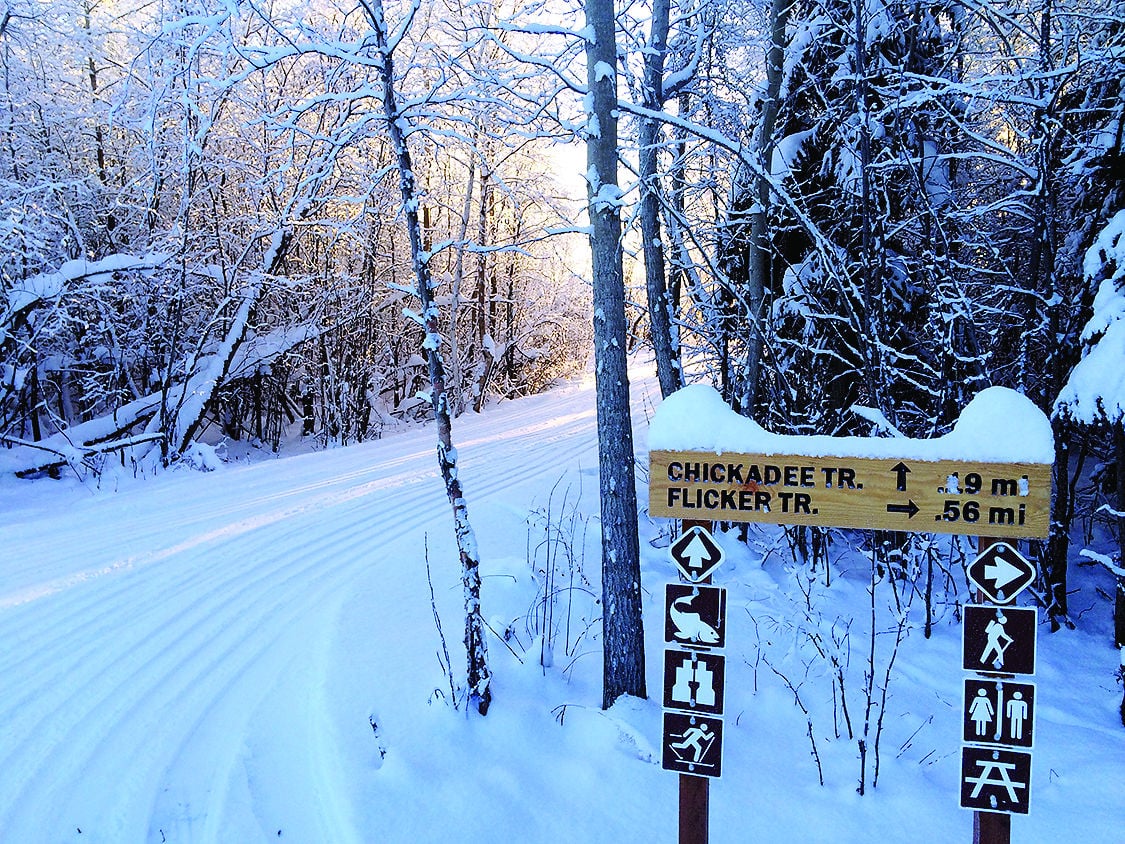 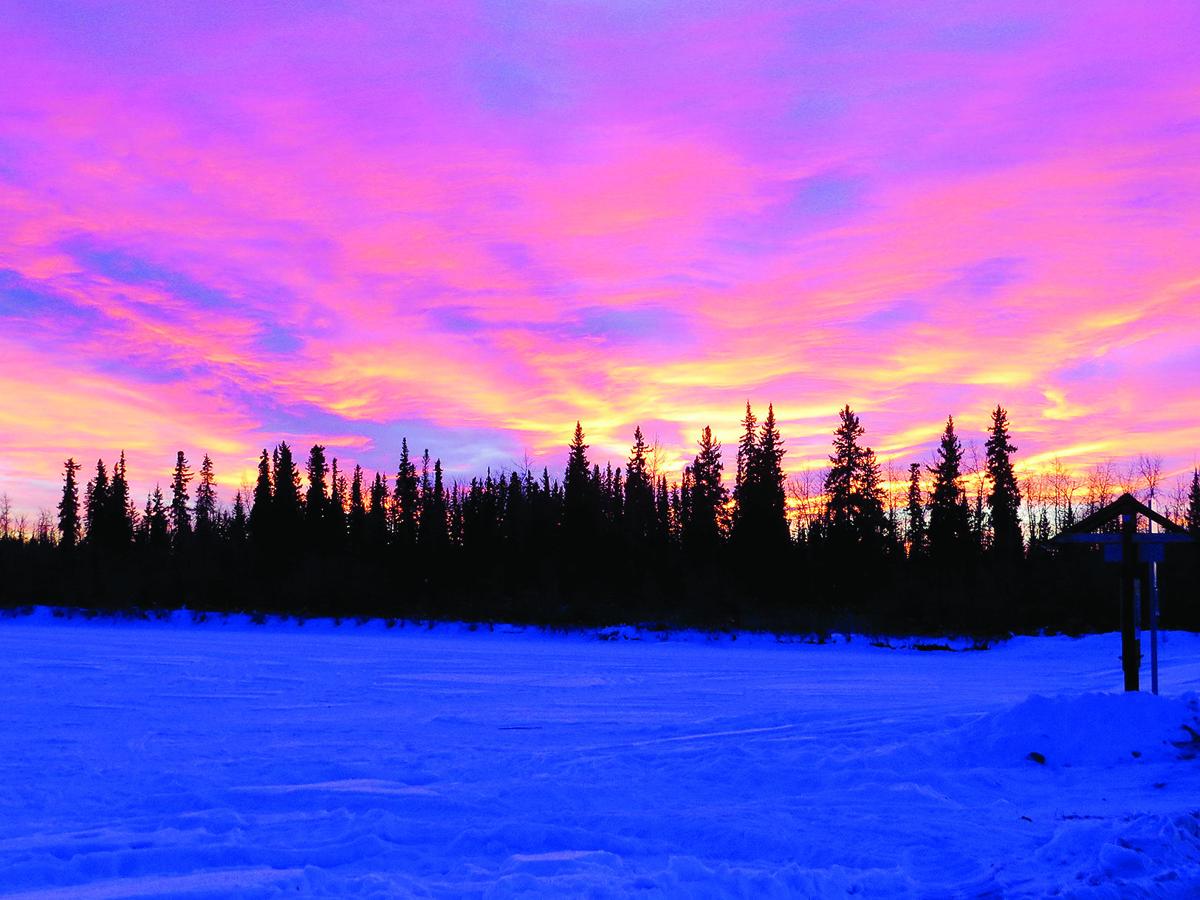 A colorful sunrise illuminates the area the borough hopes to develop as a skating rink at Tanana Lakes Recreation Area.

Siblings Mikayla Skellie, 17, right to left, Liberty Skellie, 11, and Benjamin Skellie, 14, ice skate around the skate loop at Tanana Lakes Recreation Area on Friday, February 26, 2016. They were there with their mother Angela Skellie.

A colorful sunrise illuminates the area the borough hopes to develop as a skating rink at Tanana Lakes Recreation Area.

As winter approaches, Fairbanks loses about 7 minutes of light every day and temperatures typically drop below zero. On Dec. 21, the winter solstice — which is the shortest day of the year — the sun will rise at roughly 11 a.m. and set 3 hours, 42 minutes later. On top of that, Fairbanks see an average annual snowfall of 65 inches.

People with day jobs who enjoy hiking are probably thinking that short daylight hours don’t leave a lot of time for a ramble; and trekking through thigh-high snow sounds like a chore. You’re not wrong. Fortunately, there are a number of trails close to town that are maintained throughout the winter — and some of them are even lighted.

Fairbanks North Star Borough Parks and Recreation Department Superintendent John Hosk recommends Griffin Park, which features a lit and maintained pathway that runs along the Chena River in downtown Fairbanks. Hosk said that path is frequented by “a lot of people” during the dark, cold months.

“People walk from Pioneer Park all the way to Fort Wainwright,” he said. “There’s a few miles there. A lot of people walk that or jog it.”

“We don’t maintain the whole length,” he said. “It’s broken up and taken care of by a couple of different entities.”

Bryant Wright, the borough’s trails coordinator, concurred with Hosk on Griffin Park — but recommended that hikers give Tanana Lakes Recreation Area a go, as well.

“I’d throw a plug in for Tanana Lakes,” he said. “It’s a great place to walk in the middle of the day when you’ve got a few hours of light.”

Wright suggested the middle of the day because Tanana Lakes does not have lighted trails. But, don a headlamp, and you’ll be set, Wright said.

“We do maintain a couple of kilometers there,” he said. “It’s just plowed and hard-packed.”

According to Wright, a popular section of the Tanana Lakes area is the north side of Goose Island. He said you can walk about 3 miles of trails if you hike around the whole thing. There are several other local recreation areas that the borough maintains during the winter.

“The three places that we’re maintaining are Chena Lakes (Recreation Area), Birch Hill and Tanana Lakes,” Wright said. “Chena has some stuff that’s multi-use and Tanana Lakes is the same way. People can walk on them, bike on them or ski on them.” Birch Hill trails are maintained for skiers after the snow flies.

If you live or work on the west side of Fairbanks, your best bet for winter trails may be the University of Alaska Fairbanks North Campus, which features a system of trails across about 1,100 acres.

“We do recreation, we also have a lot of research that happens out there, because it’s so close to campus. And classes are held there,” said North Campus Manager Kara Axx. “We have about 25 miles of groomed trails that we maintain and a small portion of the trails are lit.”

Frank Olive, who serves as an outdoor adventures assistant programming coordinator at the university, has lived in Alaska for more than 25 years. He said roughly 3 miles of the ski trails are lit during the winter and noted that one of the walking trails runs alongside a lit skiing trail, so there’s “probably a mile or two” that’s lit for walkers.

“Basically the trails are multi-use. Each season, there are different things the trails can do,” he said. “A wide portion of the trails are regularly groomed for cross-country skiing. There are also walking and snowshoe trails; they’re packed to a degree.”

Olive recommended what are referred to as “commuter trails,” some of which take you all the way across campus.

“One of the trails you can walk goes from Yankovich Road over to West Ridge (Research Building),” he said. “Those trails also allow dogs on leashes.”

In order to take full advantage of what the trail system has to offer, however, Olive said that it’s worth looking at which trails connect with others.

“So many of the trails here on campus connect in with other trails that are maintained,” he said. “You can cross over Farmers Loop Road and get onto the Jeff Studdert Mushing Trails. Those lie between College Road, Steese Highway and Farmers Loop. There’s a huge trail system out there.”

Likewise, he said, if you were to walk through the North Campus trail system and cross Yankovich Road, you can access the Skarland trails.

“You can cross Sheep Creek Road and you can get onto Goldhill Ace Lake Trails, which is another awesome set,” Olive said. “Many of them aren’t formally groomed by someone who gets paid, but there are volunteers and some are groomed by users.”

According to frequent News-Miner Outdoors section contributor Eric Troyer, an example of a trail set that is user-maintained is the Goldstream winter trail system, which is semi-regularly groomed by mushers.

Olive advises that any walker take a headlamp or a flashlight with them, but for newcomers to Fairbanks his message is: don’t fret.

“I know people are intimidated by the dark — but I find that once the snow falls … we just get so much ambient light that I’ll regularly walk or ski without a lighting system,” he said. “The one dilemma I’d say with the huge vast network of trail systems in Fairbanks is there isn’t a comprehensive way to find them all — beyond exploration.”

You can access all the UAF trail maps online here: bit.ly/33OzUoR . For more information on the trails that are maintained by the Fairbanks North Star Borough, visit its website: bit.ly/2YOPgI7