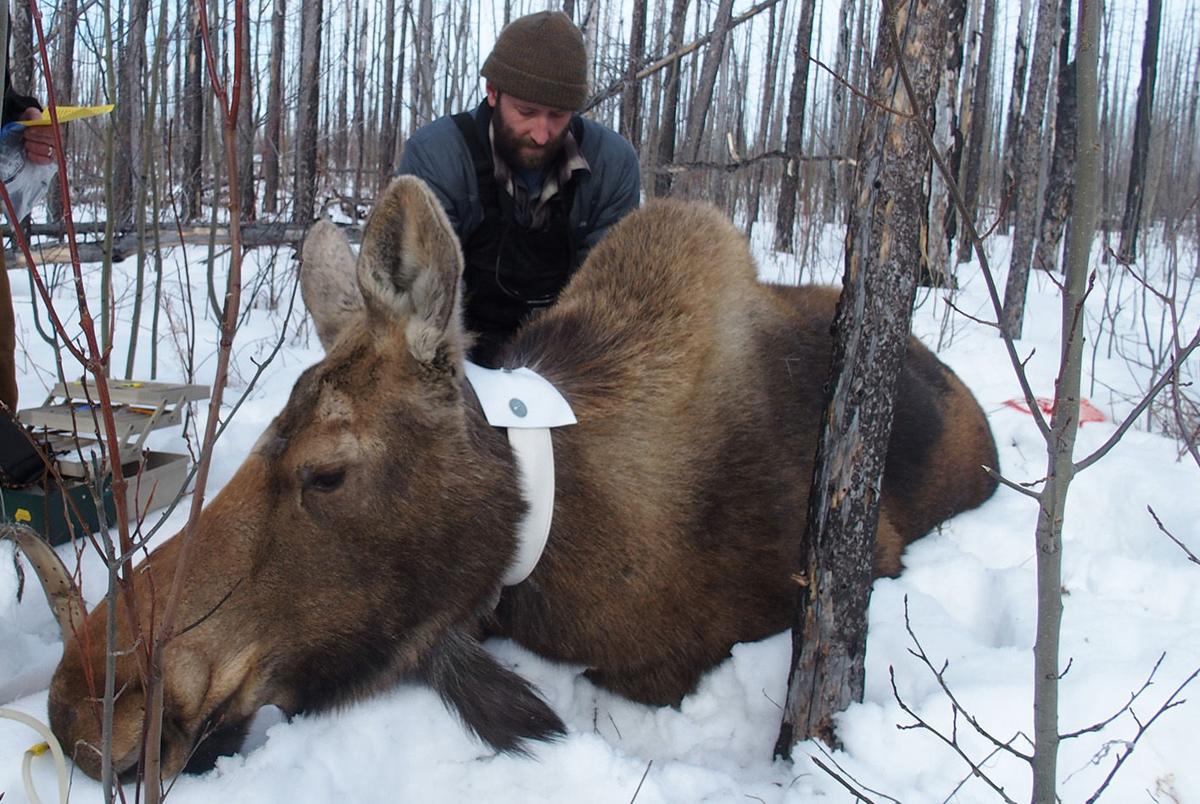 Graham Frye deploys a radio-collar on an adult female moose in 2017. Tracking moose in this way, he said, was "integral to the project throughout its duration." 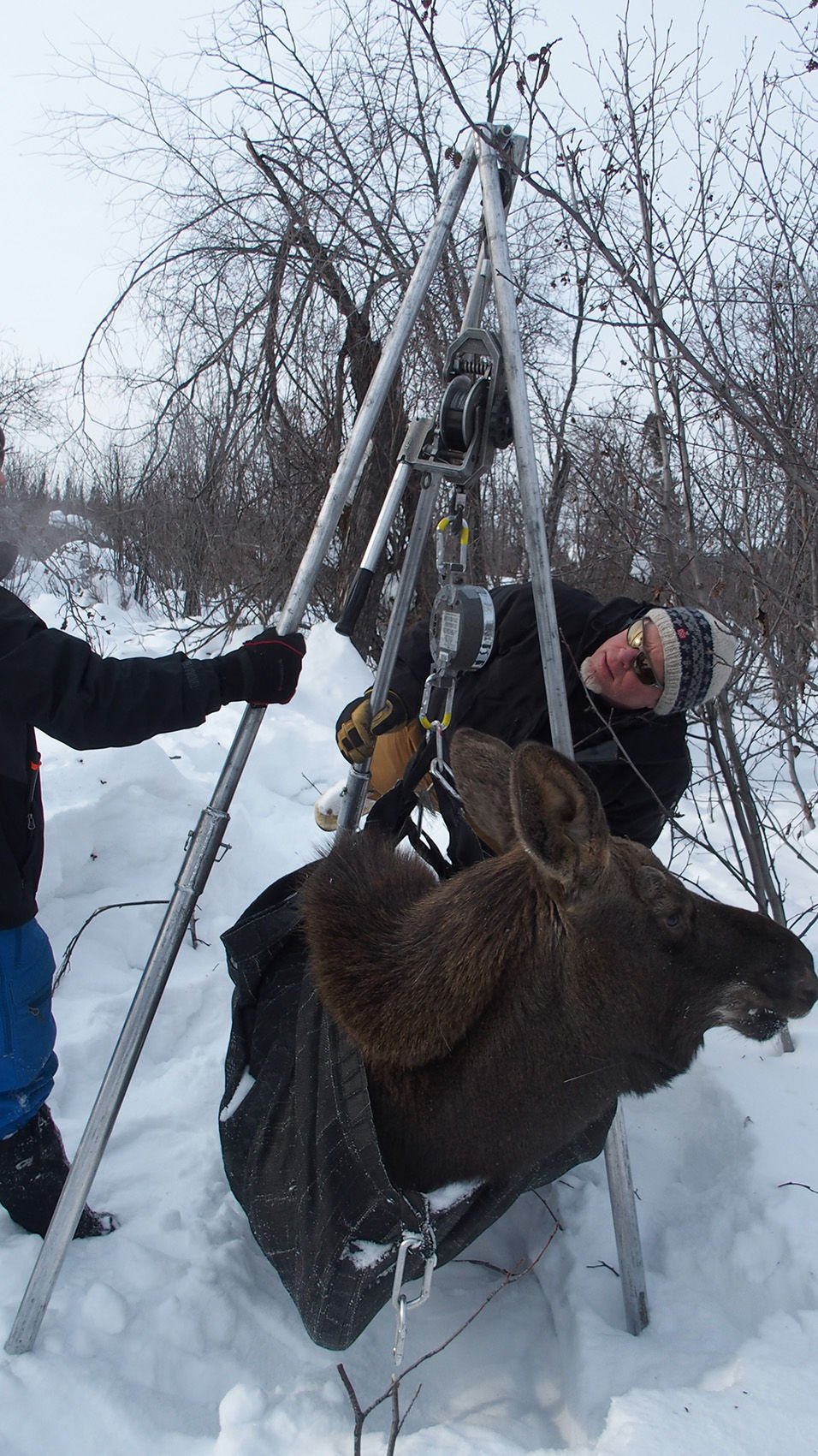 Troy Cambier weighs a 10-month old calf in 2017, toward the end of the study. Courtesy Alaska Department of Fish and Game. 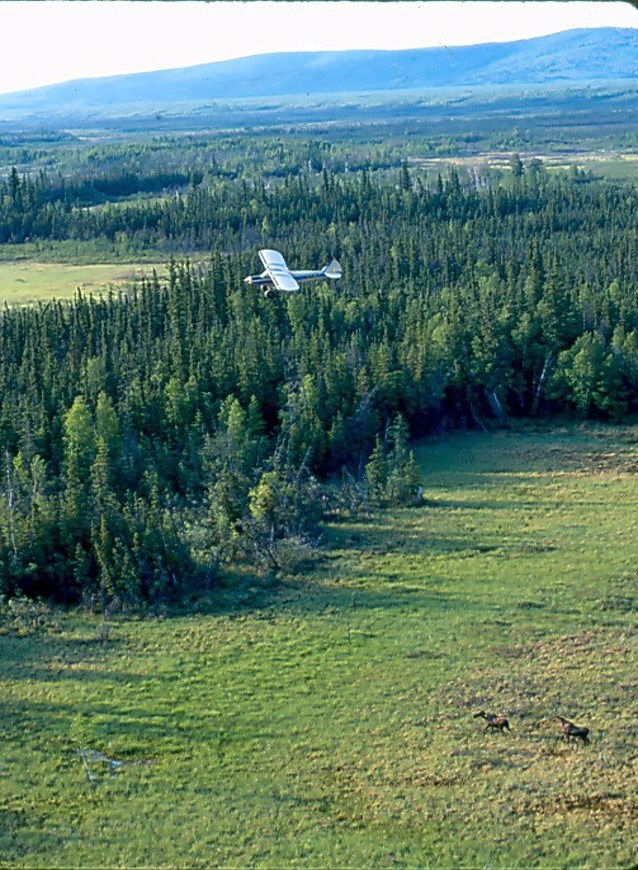 An airplane circles moose in a fen to search for calves during spring twinning surveys. Courtesy Alaska Department of Fish and Game. 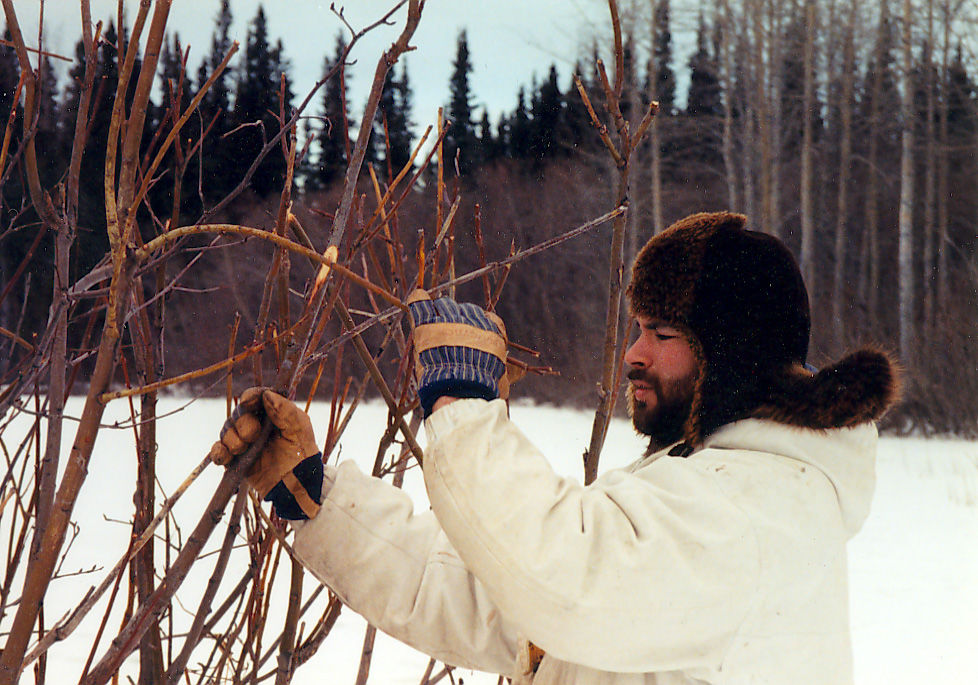 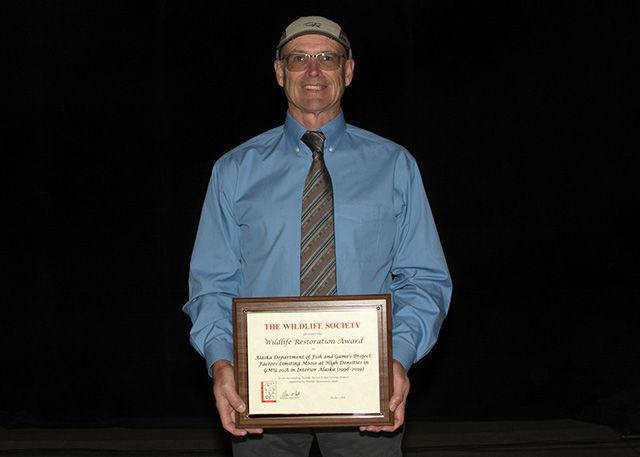 Graham Frye deploys a radio-collar on an adult female moose in 2017. Tracking moose in this way, he said, was "integral to the project throughout its duration."

Troy Cambier weighs a 10-month old calf in 2017, toward the end of the study. Courtesy Alaska Department of Fish and Game.

An airplane circles moose in a fen to search for calves during spring twinning surveys. Courtesy Alaska Department of Fish and Game.

Last year, the Wildlife Society awarded a Wildlife Restoration Award to the Alaska Department of Fish and Game, for a study entitled Factors Limiting Moose at High Densities in GMU 20A, which is near Fairbanks. The Wildlife Restoration awards were established in 2018 as a way to recognize “excellence” in wildlife management and research. Those familiar with the Fish and Game study that won, however, use far more extolling adjectives than that to describe its significance.

In the early 1990s, management biologists found that the moose population in unit 20A was growing with no signs of slowing down. As a result, they suspected, the moose were living in ever-worse poorer nutritional conditions. Thus began a 22-year-long study into why the moose population was proliferating, what impact this was having on the moose’s health, and how the population should be managed to ensure the herd’s survival.

Graham Frye, a Fish and Game wildlife research biologist for region three who was involved in just the past two years of the study, called it “a huge undertaking.”

“Not only is it unique in Alaska, it is really the only kind of study like this in the world,” Frye said. “This is a totally one-of-a-kind data set.”

Frye began working for the department in 2017, after he’d completed a Ph.D. in statistics at the University of Alaska Fairbanks. He immediately started working with Rod Boertje, the lead biologist on the study. He said that the findings of the study are applicable for management far beyond just the moose population of 20A.

“It’s definitely generalizable — certainly across Alaska,” he said. “It’s increased our general understanding about the mechanisms of general population change, but it’s also given us some great tools for management.”

“The data that we’ve produced from this study — we’re going to continue to learn from that data-set for years to come,” he continued.

Boertje arrived in Fairbanks in 1978 and, after graduating from UAF in 1981, went to work for Fish and Game. After doing some projects revolving around caribou down in Southeast Alaska and working his way up to the point where he could start writing his own research proposals and taking on graduate students for assistance, he landed on a clear-cut issue to focus on.

“The obvious project was moose in 20A, just south of the river there. Some people call it the Meat Locker of Alaska, because it does produce a lot of moose,” he said. “It was growing steadily and I knew at some point that the population would either get out of control or collapse.”

The moose population in the area had declined steeply in the 1970s due to severe winters, wolf predation and liberal antlerless harvests. But following the implementation of wolf control from 1976-1982, moose numbers had increased with consistency. Boertje said he wanted to “bring science to the table” to get the population under control.

In 1994, it was decided that higher harvests of moose were necessary in certain areas of Alaska, including unit 20A. Given that the growing moose population in unit 20A had the potential to exceed the carrying capacity of the area — which means exhausting the resources required to support the population — data was needed to prove that higher female moose harvests were necessary. According to a report compiled following the completion of the study, this was particularly vital in order to convince “a skeptical public that liberal antlerless harvests were prudent to deter the further stockpiling of moose.”

The study, which commenced in 1996 involved monitoring reproduction, survival rates, causes for mortality, predator-prey relationships, nutrition, harvest and how the density of the population interacted with all of this.

Boertje and a team of biologists and graduate students attached radio collars to 226 female moose and 164 male moose at 9–10 months of age. These moose were radio tracked and surveyed via aircraft for years, particularly during calving seasons.

“My work was based on birth rates and mortality rates of moose,” Boertje said. “All the research that I was doing had to be summarized on almost a monthly basis.”

Biologists conducted numerous studies on the health of the moose, including listening for mortality signals like double pulse rates, and examining the relationship between the depth of rump fat and blood condition. The moose’s movements and diet were documented.

Boertje noted some of the unusual findings that were caused by such a high density of moose.

“We noticed there was a lot more alder than other parts of Alaska. That’s because the moose had taken over. Moose don’t eat alder, they eat willow,” he said. “The density was already much higher than we’d seen anywhere else in wild Alaska. Bear predation on moose was much lower in 20A than anywhere else we’d looked at in Alaska … we found we had a very unique situation.”

He noted that most of Alaska provides relatively low moose harvests per unit area because of naturally high wolf and bear predation. In contrast, unit 20A has naturally low bear predation on moose specifically in the key calving area — the Tanana Flats — can be attributed to exceptionally poor drainage.

The study found that, due to the high density of the population, the area was experiencing the “lowest moose reproductive rates in continental Alaska and Canada, the lowest body weights of nine-month-old calves in Alaska, and highest overwinter use of favored browse species,” according to Boerjte.

The moose population, however, continued to grow until the local advisory committees permitted liberalized harvests of female moose in 2004 to bring the numbers to a more sustainable level.

“On an annual basis we’d bring this information to four different advisory committees,” Boerjte said. “It was long-term enough that there really wasn’t any doubt in the science. It wouldn’t be a very good story if I’d stopped seven years ago.”

The antlerless hunts proved controversial but gained public acceptance over time as the success of the management became apparent. It resulted in an intentional decline of the population from 18,000 to approximately 12,000 moose by 2012, when liberalized female harvests ceased and the population stabilized. The area now sees a higher moose reproductive rates and lower browse rates.

“We didn’t cause a very rapid decline, we caused a very measured decline,” Boertje said. “I‘m sure there are still people that don’t like the cow hunts and want 20,000 moose there, but there was enough science to convince the ACs (advisory committees) that they had an alternative to waiting for another crash.

“Without that data we wouldn’t have achieved the task at hand,” he added, “which was to improve the nutrition of the moose.”

“I don’t know of any studies in North America that are that long term and then have lead biologists follow through on it,” Boertje said. “It’s certainly extraordinary, and kind of unique for North America.”

Brainerd wrote that the department now has the knowledge and research to effectively manage moose at sustained moderate densities across the state. This could lead to a reduction in the demand for predator control programs, which can be expensive and unpopular with the general public.

“It has provided essential information and knowledge crucial for managing moderate to high density moose populations with high hunter demand with intact predator populations in habitat of generally low productivity as is typical for interior Alaska,” Brainerd wrote. “No other long-term study of moose in Alaska has had such consequential and important impacts on moose and predator management.”

Brainerd wrote that the study was “well worth” the expense of $1.32 million in salary, contract and operating costs over a 24-year period. The project was mostly funded by a three-to-one matching grant from the Federal Aid in Wildlife Restoration Program. Boertje pointed out that the project had a direct impact for Fairbanks-based hunters.

“It’s such a big part of Fairbanks hunting culture — it’s pretty accessible by boat, by trail in the foothills and of course by aircraft, there are air strips everywhere — it had just always been a major hunting ground for Fairbanks,” Boertje said. “It’s really unique, but in the same time it fed right back into management.”

More significantly, as Graham Frye said, the research will likely be used by management biologists for years, to the benefit of all hunters.

“Just the general uniqueness of it all,” Frye said. “The data that we’ve produced from this study, we’re going to continue to learn from that data-set for years to come.”