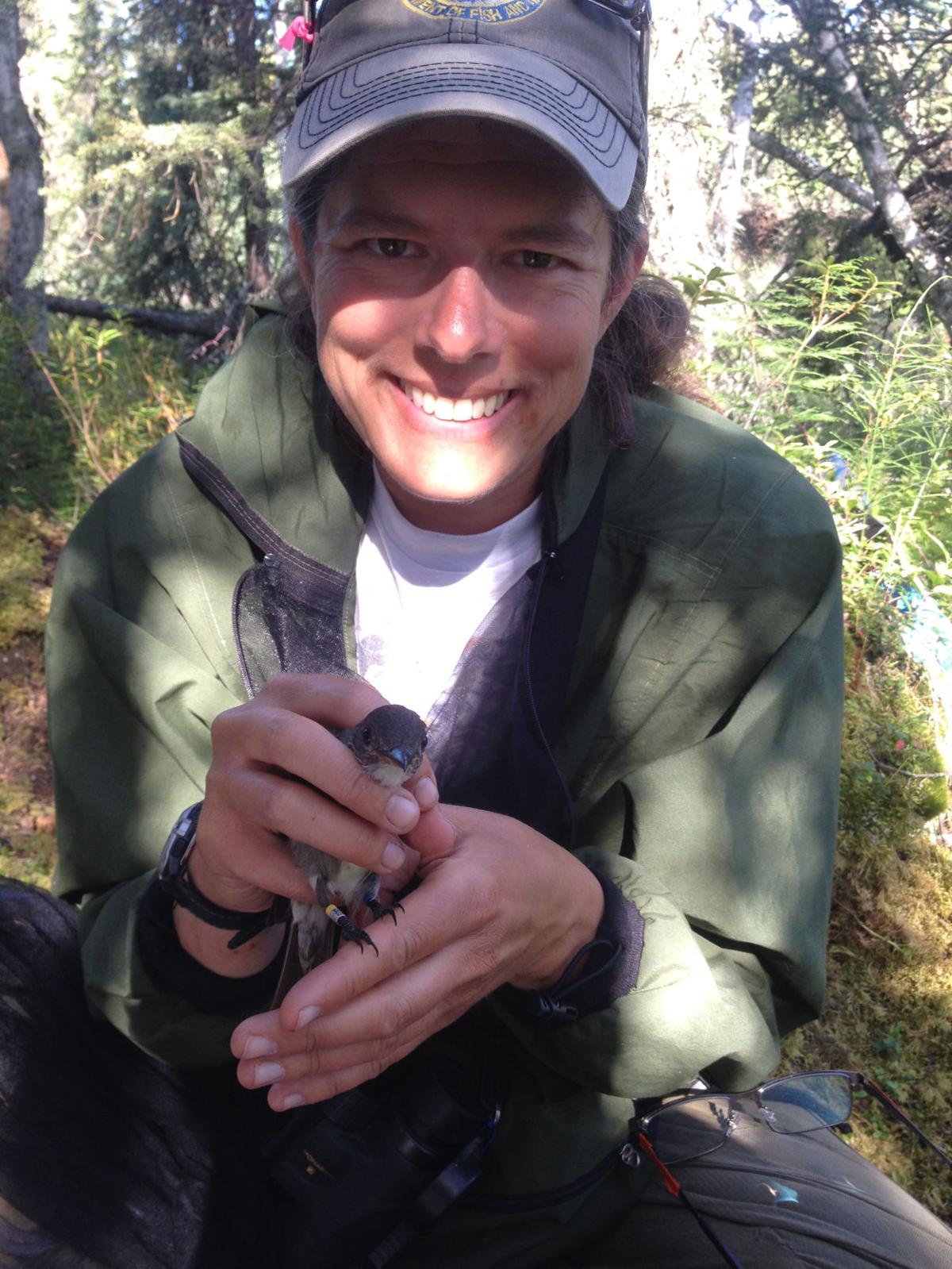 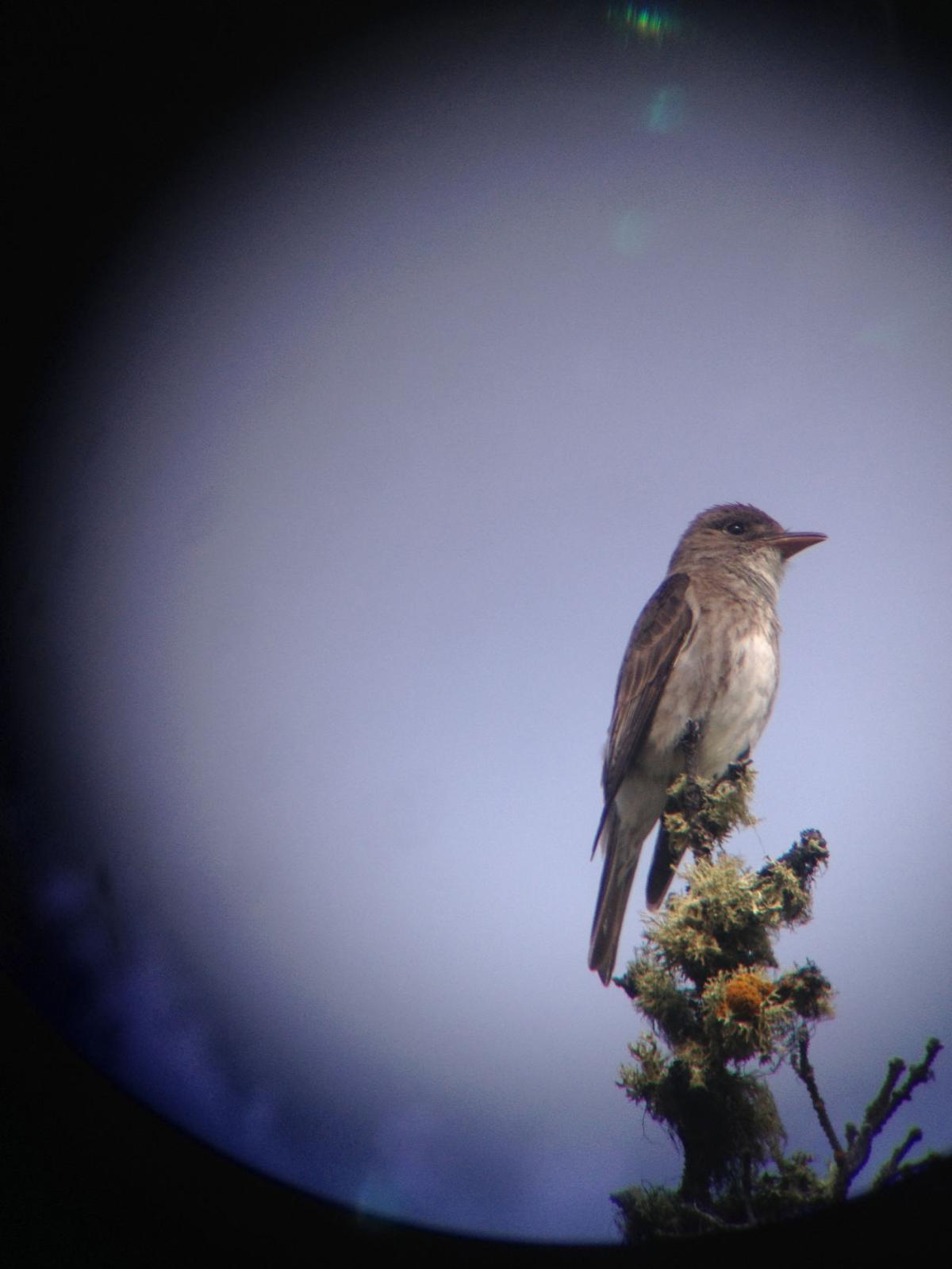 An olive-sided flycatcher perched on a spruce tree is seen through a spotting scope in a summer 2013 photo.

An olive-sided flycatcher perched on a spruce tree is seen through a spotting scope in a summer 2013 photo.

FAIRBANKS — With reports of olive-sided flycatchers at Tanana Lakes and the Goldstream Valley peat ponds this past week, it seemed like a good time to check in with Alaska Department of Fish and Game Regional Wildlife Biologist Julie Hagelin, who has led a study of the species for several years. There is a wealth of new information since we last talked about the project in May 2015.

When I spoke to Hagelin May 26, she said the first male olive-sided flycatchers returned about mid-May but that most females hadn’t arrived yet. Males arrive first, spending a couple weeks sorting out territory ownership. Females tend to arrive a week or two later. Hagelin speculated females may have waited for better weather this year before making their final push north.

The olive-sided flycatcher is not a flashy bird, but it is distinctive. Males and females look the same: gray-brown, with a white throat, chest and belly. Dark gray-brown wraps around the sides of the chest so it looks like the bird is wearing a vest. Two white tufts of feathers on the lower flanks are often hidden by the wings but may be fluffed up and flashed as a warning during aggressive encounters.

This flycatcher has excellent posture, sitting very upright when perched at the tips of standing dead snags or dead-topped black spruce. It usually has a cone-headed profile, with the crest (the feathers on the top of the head) raised up. Aptly named, you’ll often see an olive-sided flycatcher silhouetted against the sky on a treetop, scanning for its flying food.

Olive-sided flycatchers are categorized as “aerial insectivores,” birds that catch insect prey in midair. The flycatchers perch high in a tree, waiting for a likely snack to buzz by, zipping into the air to snap up the insect. Flycatchers are fearless predators — they will capture dragonflies and even wasps. Imagine grabbing a wasp the size of your head with your mouth!

The song of the olive-sided flycatcher is easy to remember, especially if you hear one at the end of a long hike: a whistled “quick, three beers,” with the middle note higher-pitched than the others. Olive-sided flycatchers are known for long-distance calls, as they are easily heard up 2,000 feet away.

Tracking the birds isn’t easy. Olive-sided flycatchers are covert migrants in the fall and spring. They don’t gather in flocks and they don’t sing to defend territory, so they are hard to observe. In addition to banding, this project uses a technological boost to follow flycatchers.

Advances in technology have opened new windows into bird migration. For the past several years, Hagelin’s team captured olive-sided flycatchers to attach geolocators, small devices with an onboard clock that records the intensity of sunlight. From these data, she and her team can estimate a bird’s longitude by determining day length, and latitude based on the timing of “high noon” (when sunlight is most intense during the day). Geolocators don’t send a signal like satellite transmitters, so they run off smaller, lighter batteries and can be used on smaller birds. The units Hagelin uses weigh less than a gram, half the weight of a penny. Geolocators are extremely useful for tracking migration, recording light level measurements for up to two years, long enough to cover two full cycles of migration. The catch? Researchers must recapture the bird to retrieve the data.

Like Clark Kent, the drably dressed olive-sided flycatchers hide an incredible secret — they make one of the longest journeys of any songbird that breeds in North America or Greenland (the “Nearctic” region). The geolocator data shows birds from Interior and Southcentral Alaska migrate to two general regions: one in Ecuador and northern Peru and the other about 700 miles farther south in southern Peru, western Brazil, and Columbia. Round-trip, olive-sided flycatchers rack up to 14,000 miles annually. The data showed some of the flycatchers even flew across the Gulf of Mexico, quite a feat for a bird that weighs a little more than five quarters. It’s impressive that “these birds actually can do this remarkable long-distance journey every year, powered by bugs,” Hagelin said.

Hagelin and her crew put a huge amount of effort into finding returning birds with geolocators. The resulting stories reveal more about how these birds live. It’s unknown if olive-sided flycatchers mate for life; however, some pairs in the study reunited from year to year.

The research team recaptured one pair of olive-sided flycatchers in which both male and female had geolocators. The male migrated to Ecuador and the female to southern Peru.

“They went through similar areas, but we don’t know if they migrated together. They wintered in wildly different places but found each other again in Alaska,” Hagelin said. “It’s amazing to see the same bird year after year coming to breed at the same place about the same time, to nest within 160 feet of where it nested last year. There may be a big reproductive payoff from coming to Alaska — maybe a result of Alaska’s contiguous, high quality wetland habitat and lots of insects!”

Hagelin and her team have started to identify “hot spots” along the migration route. Looking for places where multiple birds’ paths overlap and identifying when birds remain in one place for an extended stay can help decipher locations of important migration stopovers. It’s “allowing the bird to show us what’s important,” Hagelin said. By mapping these areas, the Alaska team can work with other researchers to piece together key locations and habitats birds rely on during migration.

Each technological tool has pros and cons. The drawback to geolocators is they only narrow each bird’s location down to within a couple hundred miles. A new generation of GPS satellite transmitters are now small enough to fit an olive-sided flycatcher, and can provide locations accurate to about 15 feet. The drawback? They only have enough battery power to record 80 point locations in a year. Once researchers find a suspected stopover location, they can program the GPS to record points during the time they expect birds to reach that location. Hagelin’s team deployed a handful of the new GPS units last year and are eagerly waiting to recover them this season.

Migrants like olive-sided flycatchers don’t understand international boundaries. Hagelin’s project at the Alaska Department of Fish and Game collaborates with researchers at the U.S. Fish and Wildlife Service in Southcentral Alaska and at Tetlin National Wildlife Refuge. She is also collaborating with Canadian academic and agency researchers in Alberta, Northwest Territories and Yukon.

Olive-sided flycatchers are easiest to catch during breeding season, when they stay in a territory. Males sing frequently and loudly at the beginning of the season, giving researchers the best chance of locating the bird and possibly its mate and nest. Capturing birds in Alaska and uncovering where they go the rest of the year provides crucial information about these world travelers. Learning migration routes is the first step in determining what hazards olive-sided flycatchers face and is the key to ensuring they continue to call for their “quick, three beers.”

Arctic Audubon report from May 27 “Birding by Ear” Walk

The last Arctic Audubon walk of the spring tallied 38 species at Creamer’s Field and Wander Lake at the Wedgewood Resort. Trip leader Philip Martin said, “the highlight of the morning was the Warbler Grand Slam (all seven locally common species), including good looks at northern waterthrush and blackpoll warbler.” Another treat was the osprey the group saw circling over Wander Lake, nesting material in talons and calling repeatedly.

Beth Grassi (formerly Beth Peluso) is a freelance writer who worked for Audubon Alaska for nearly seven years. She is a board member for the Alaska Songbird Institute and Arctic Audubon. This week’s article is funded by Arctic Audubon. She has written the spring migration series for the Fairbanks Daily News-Miner since 2013.