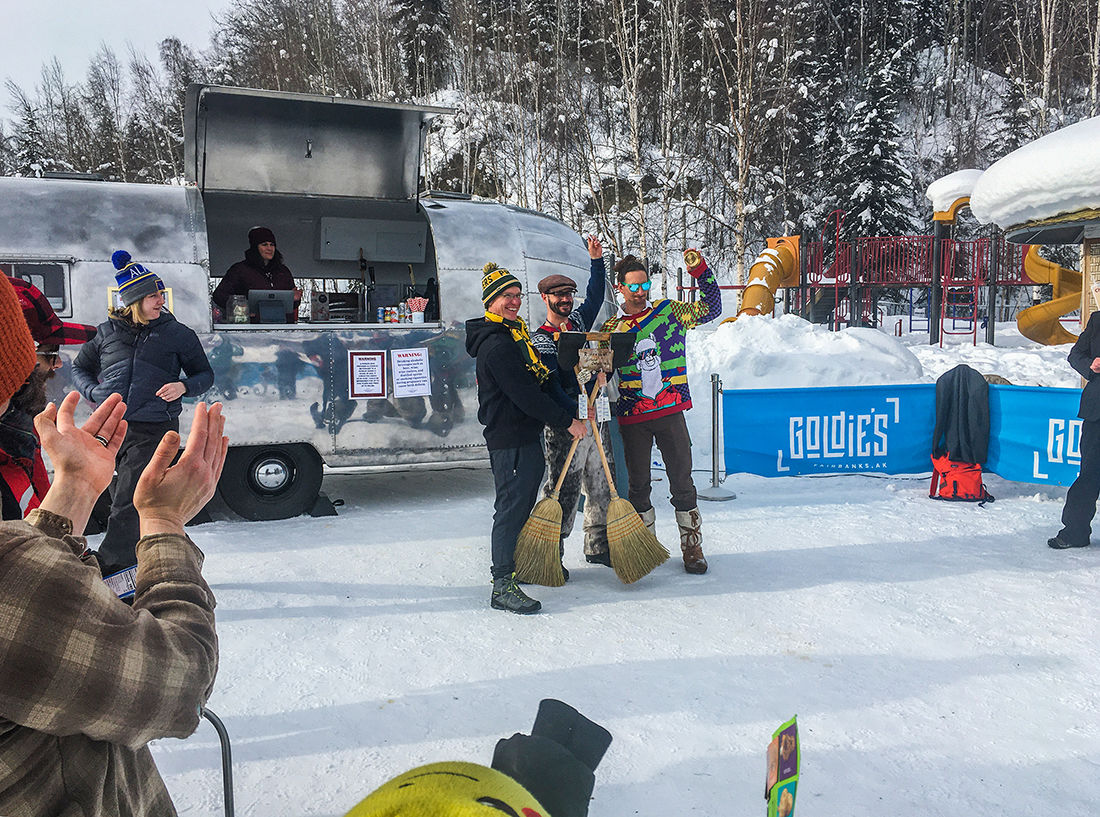 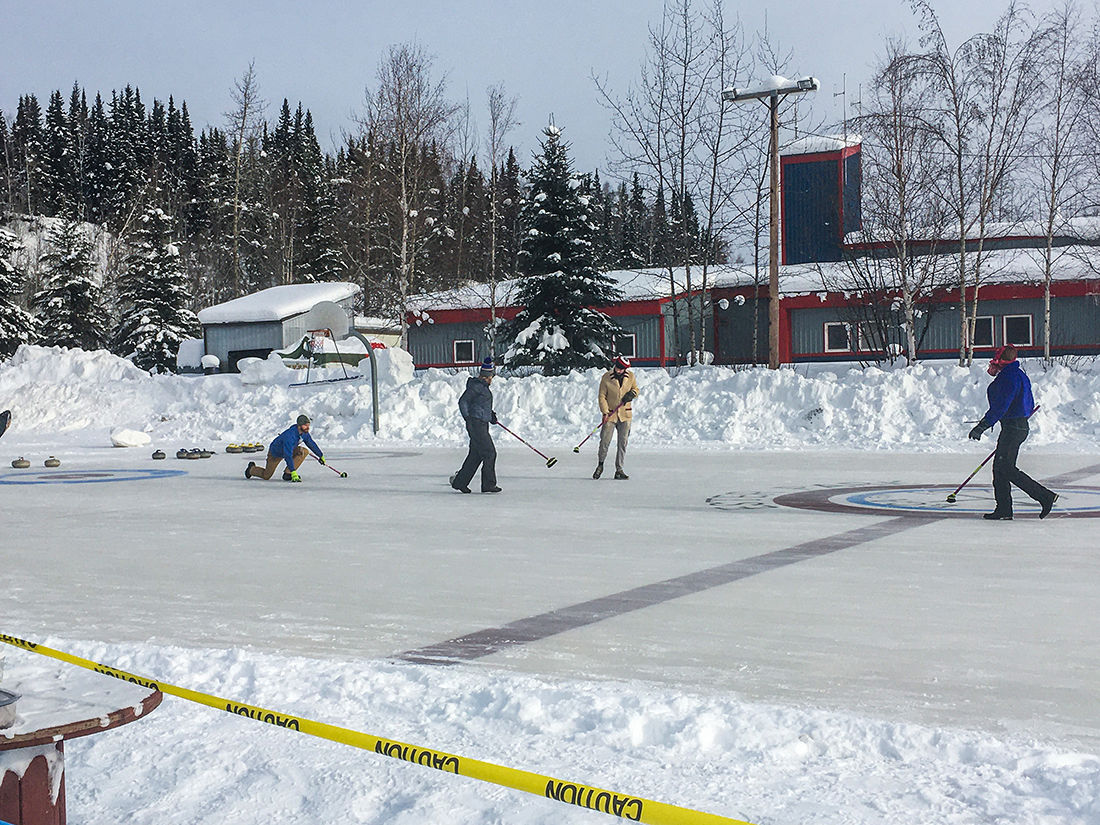 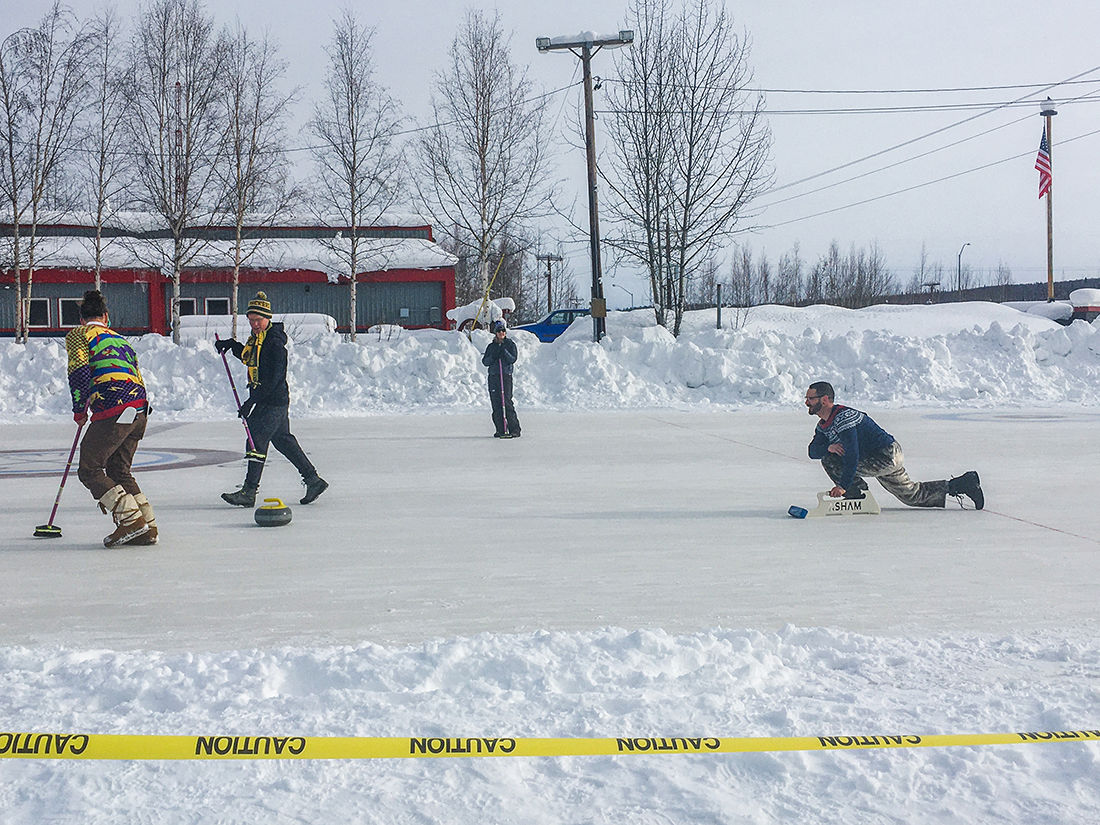 The Welch Rink, the team that won the A Bracket at the Ester Retrospiel, show off their skills at Ester Community Park on Sunday.

The Welch Rink, the team that won the A Bracket at the Ester Retrospiel, show off their skills at Ester Community Park on Sunday.

Last weekend, locals were treated to a rare event: Fairbanks’ rock-throwers ventured outside. On Saturday and Sunday, the Fairbanks Curling Club held its annual Retrospiel at Ester Community Park.

The tournament, now in its third year, is the only competitive outdoor curling event in the area. Over the weekend eight teams of three battled it out in six-end games, while spectators warmed themselves around a bonfire and enjoyed pop-up libations from Goldies AK, which brought its Airstream trailer rinkside.

Kara Nash, a board member for Fairbanks Curling Club and owner of Goldies, expressed thanks to the various other organizations and individuals who chipped in to make the event happen — including Ester Gas, the Arctic Habanero, Alaska Universal Productions Inc., Aaron Matthew Hinkey, the Roaming Root and Ursa Major Distilling. She noted that the rink at Ester Community Park is now tricked out especially for the event.

“It’s a permanent ice rink and the Ester Community Association has been painting in the curling houses for us because they know we’re going to be doing the event,” Nash said. “So it’s now a fixture of their ice rink.”

Teams played in two tiers, A Bracket and B Bracket. The A Bracket champions were the Welch Rink, a team made up of Aaron Cooke, Russell Dennis, and Joe Welch. The B Bracket was won by Goldies Team.

If you missed this year’s Retrospiel, Nash said it will take place again in 2021. In the meantime, Fairbanks Curling Club has many more events coming up. This weekend the club will host the St. Patty’s Day Double Spiel, on Saturday through Sunday, 8 a.m.  to 5 p.m. In a few weeks, the International Bonspiel will take place from April 2-5.