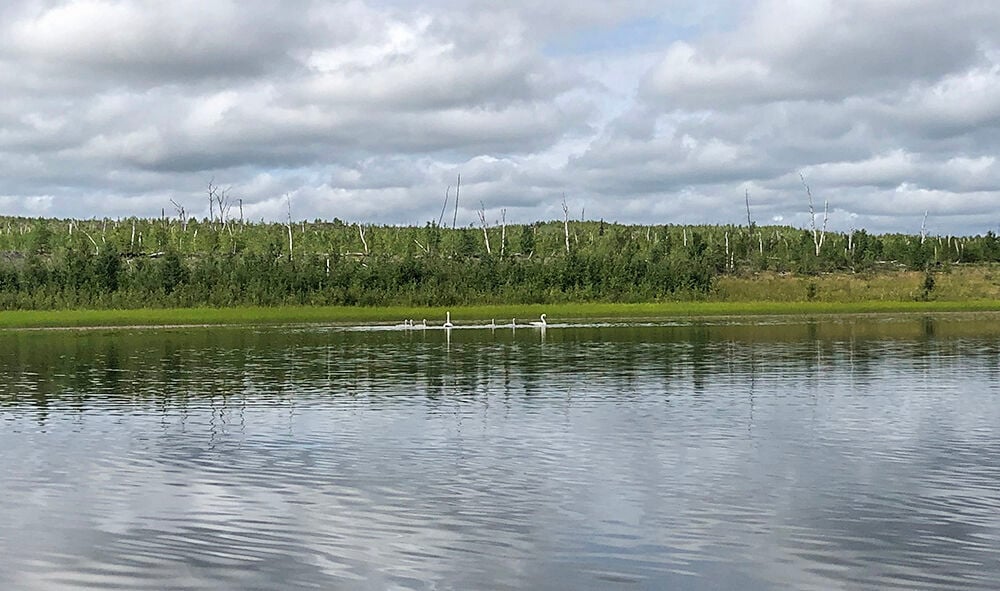 The family of swans that Chuck Gray has been observing swim on Dune Lake, looking east. Visible behind them is the final hill they traversed to reach Dune Lake. 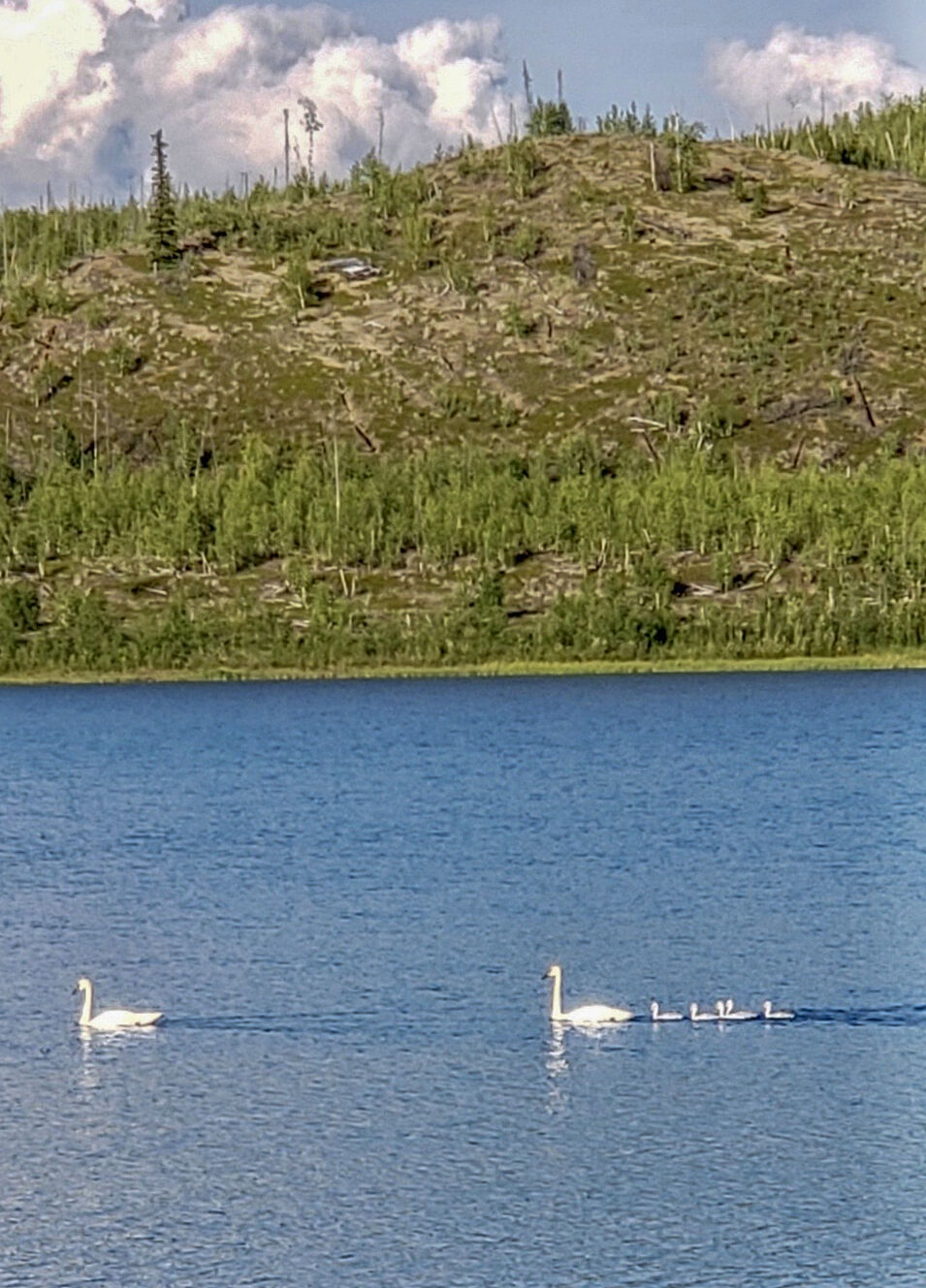 The Trumpeter Swan family, the antics of which Chuck Gray has been following, were photographed swimming on Dune Lake this summer. 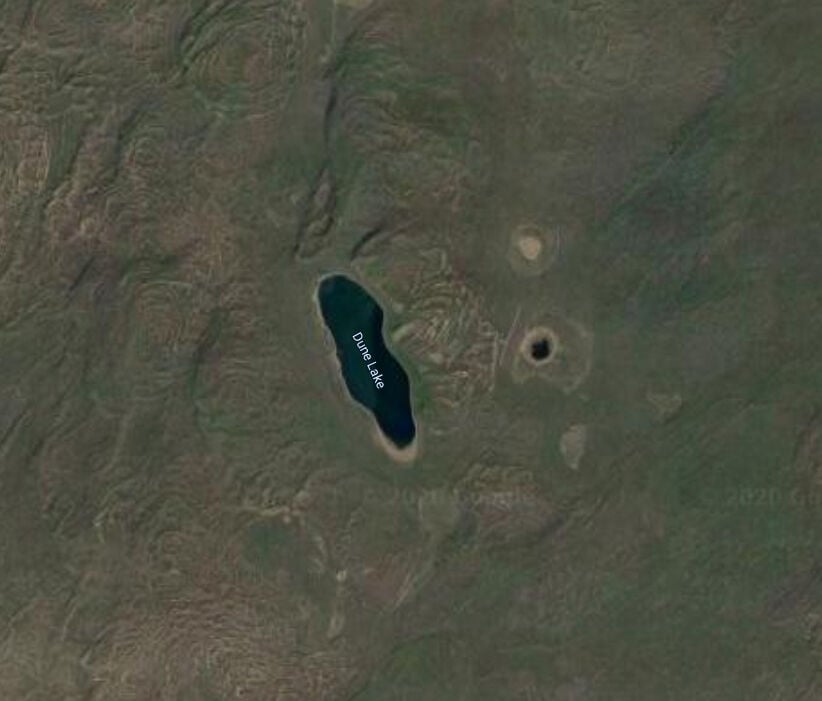 A map shows Dune Lake, where Chuck Gray fishes annually. The pothole, to where the swans decamped, is roughly a mile and half to the east of Dune Lake.

The family of swans that Chuck Gray has been observing swim on Dune Lake, looking east. Visible behind them is the final hill they traversed to reach Dune Lake.

The Trumpeter Swan family, the antics of which Chuck Gray has been following, were photographed swimming on Dune Lake this summer.

A map shows Dune Lake, where Chuck Gray fishes annually. The pothole, to where the swans decamped, is roughly a mile and half to the east of Dune Lake.

Chuck Gray, a former newspaper publisher who retired from his position with the Fairbanks Daily News-Miner in 1993. Since then, he’s spent a lot of his time fishing. Roughly a decade ago, he flew down to Dune Lake, a body of water that lies about 25 miles southwest of Nenana and which is stocked with fish by the state.

“That’s when they, all at once, appeared,” Chuck said. “It’s not a very large lake, so it’s very obvious when they’re there.”

Chuck was referring to a pair of Trumpeter swans, which had abruptly taken up summer residence at the lake where Chuck fishes on a yearly basis. In an email, Chuck described how they had nested on “a floating raft of cattails, surrounded by water.” Chuck later explained that this “island” had become anchored to the bottom of the lake, leaving it immobile and offering an area of refuge for the birds, away from predators.

Over the past decade over so, however, the water level of the lake began to drop. According to Chuck, by 2017, the level had dropped to the point where the island of cattails was no longer floating.

“Eventually the lake lost about seven feet of depth and their little nesting island sunk to the bottom and was effectively part of the shoreline,” Chuck said.

Astonishingly, Chuck said, the swans were not deterred. Rather than finding a whole new area for rearing, the swans moved their nest a mile and a half east, to a small swampy pothole that offered some water protection.

“They have nested there each year since, even though the pothole nearly goes dry by the time the cygnets hatch. To our surprise, the swans and the chicks soon appeared on Dune lake,” Chuck said. “There was no other conclusion than that the swans marched their offspring through the woods to Dune.”

In recent years, Chuck has reliably espied the swans in this same spot as he travels to the lake to fish.

“Flying into the lake, we go right over that spot,” Chuck said. “And they’re obvious. They’re pretty big bids.

“It didn’t take us long to figure out they were nesting there and then were moving the family a mile and a half to the bigger lake,” Chuck continued. “But it seemed like an almost impossible journey for the cygnets. It’s not like an open field, it’s very rugged country.”

Chuck said a wildland fire burned through the area in 2009, leaving a landscape smothered in deadfall and thick brush. Beyond this, it’s very hilly, with steep ridges that stretch 100 feet up.

“But apparently these things, that are less than a week old, can make it,” Chuck said, a tone of almost disbelief in his voice.

This year Chuck was able to record a more accurate account of this movement. He said, as of June 17, no cygnets had hatched. When he checked on June 24, the swans were no longer at the pothole, but weren’t at Dune Lake either. By June 25, however, the whole swan family — two parents and five cygnets — was at Dune.

“Since the cygnets would not have hatched the same day, they were moved when less than a week old, possibly encouraged because the pot hole was drying up. An incredible journey!” Chuck wrote in an email.

The Trumpeter Swans that inhabit interior Alaska are large birds with a very low-pitched honk. Not only are they the heaviest bird native to North America, they are also the single largest type of waterfowl.

In an email, Chuck wrote “The Trumpeters need every bit of our interior summer’s frost-free days to raise their young to a point where they can sustain long flights. In fact, it is always nip-and-tuck. If a pond freezes up before the cygnets can fly, they can no longer feed and gain strength, so they will either freeze to death or become fox food before freezing. To avoid this, the parents will often move their young to a larger lake or a moving slough that will not freeze up quite so soon. Nevertheless, some are lost when we have an early winter.”

Chuck believes that the swans at Dune Lake have become tame, because the cabin owners there do not harass or crown them when out fishing. He said that the swans spend 100% of their time on the water during the first half of the summer. As fall approaches and the cygnets are larger, however, you can find them resting in the grass, not far from water. According to Chuck, cygnets face a lot of risk during this time.

“It is not uncommon for the pair to lose some of the cygnets. Usually only one at a time, but often half of the hatch is missing by late fall.” Chuck wrote. “Fox and lynx are commonly seen at the lake. A black bear would be a disaster at a brooding site, but there is too much habitation at Dune for bears to hang around.”

For Chuck, as a witness, this simply makes their annual trek to Dune Lake all the more remarkable.

“I just think it’s an amazing thing that those newly hatched birds can make that journey,” he said. “I couldn’t walk it any more — but even when I was in good shape, I’m not sure I’d make it.”