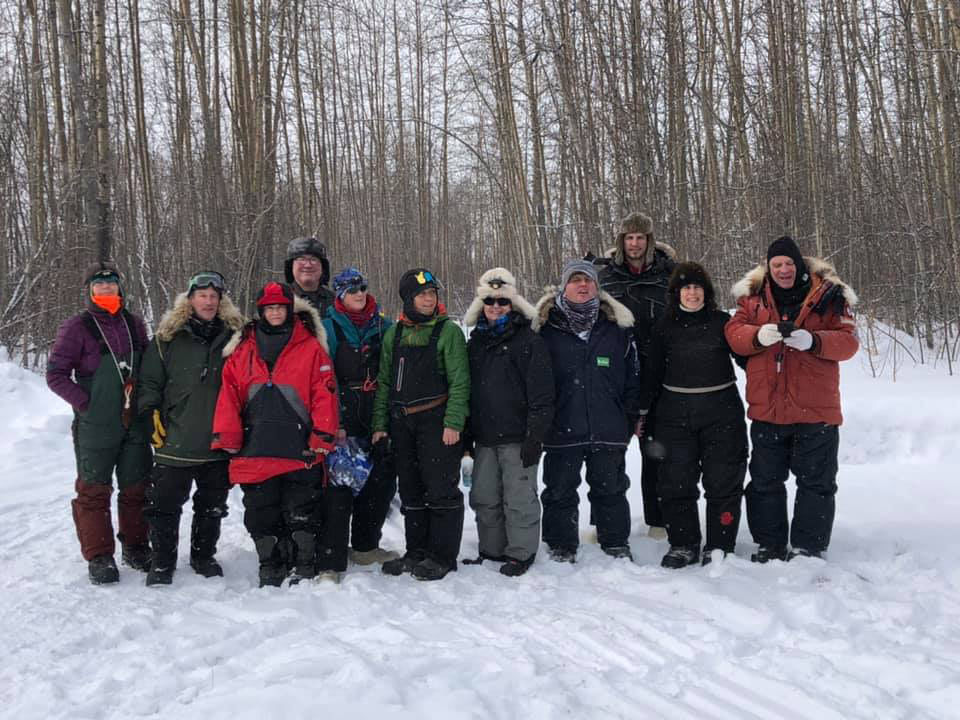 Eleven of the thirteen participants of the 2020 Serum Run expedition line up for a photo on the second day of the trail.

A photograph uploaded to Facebook on March 1 by Kirsten Bey shows Stephanie Johnson's dog team running the trail. Bey was later hospitalized after being struck by a snowmachiner just outside of Galena. 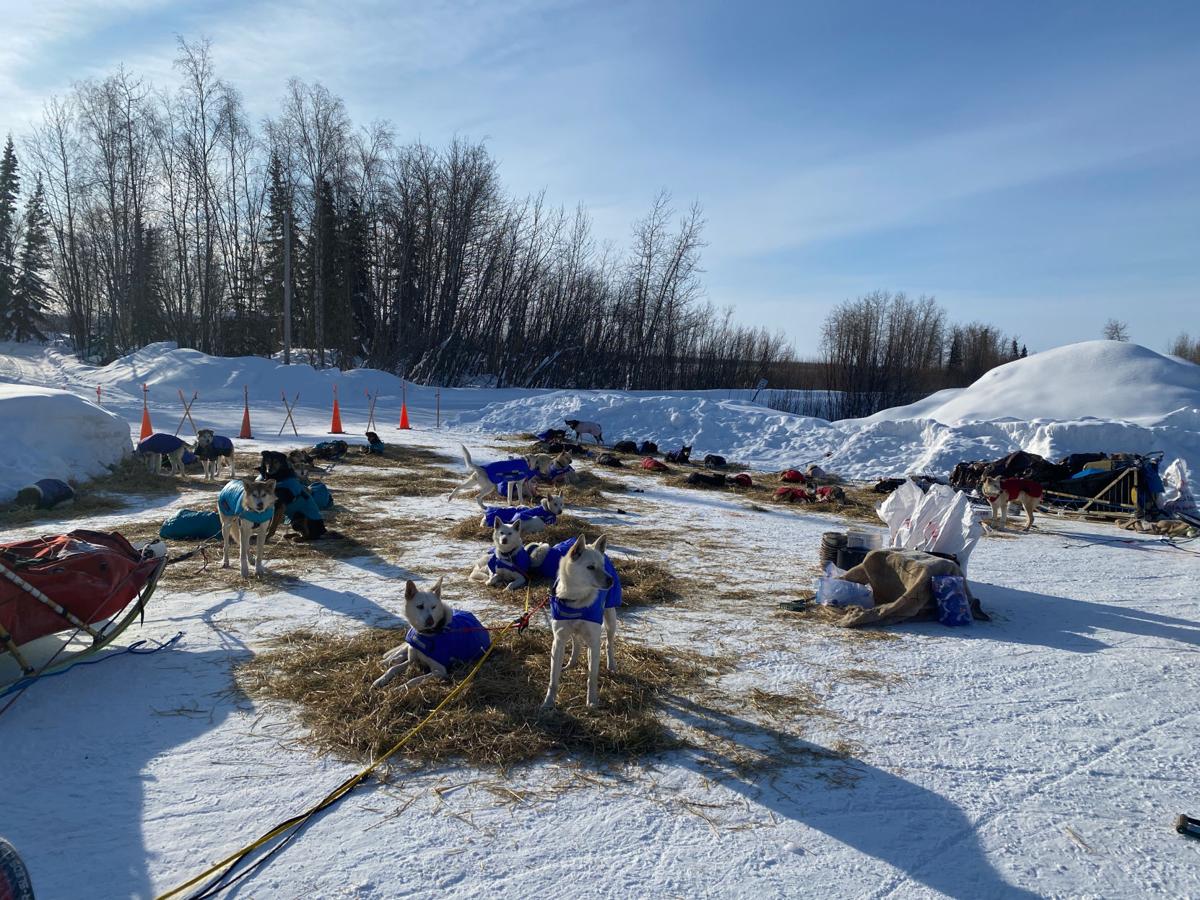 Two of the dog teams rest up in Galena, which is where Forto had to drop out of the expedition due to technical issues with his snowmachine. 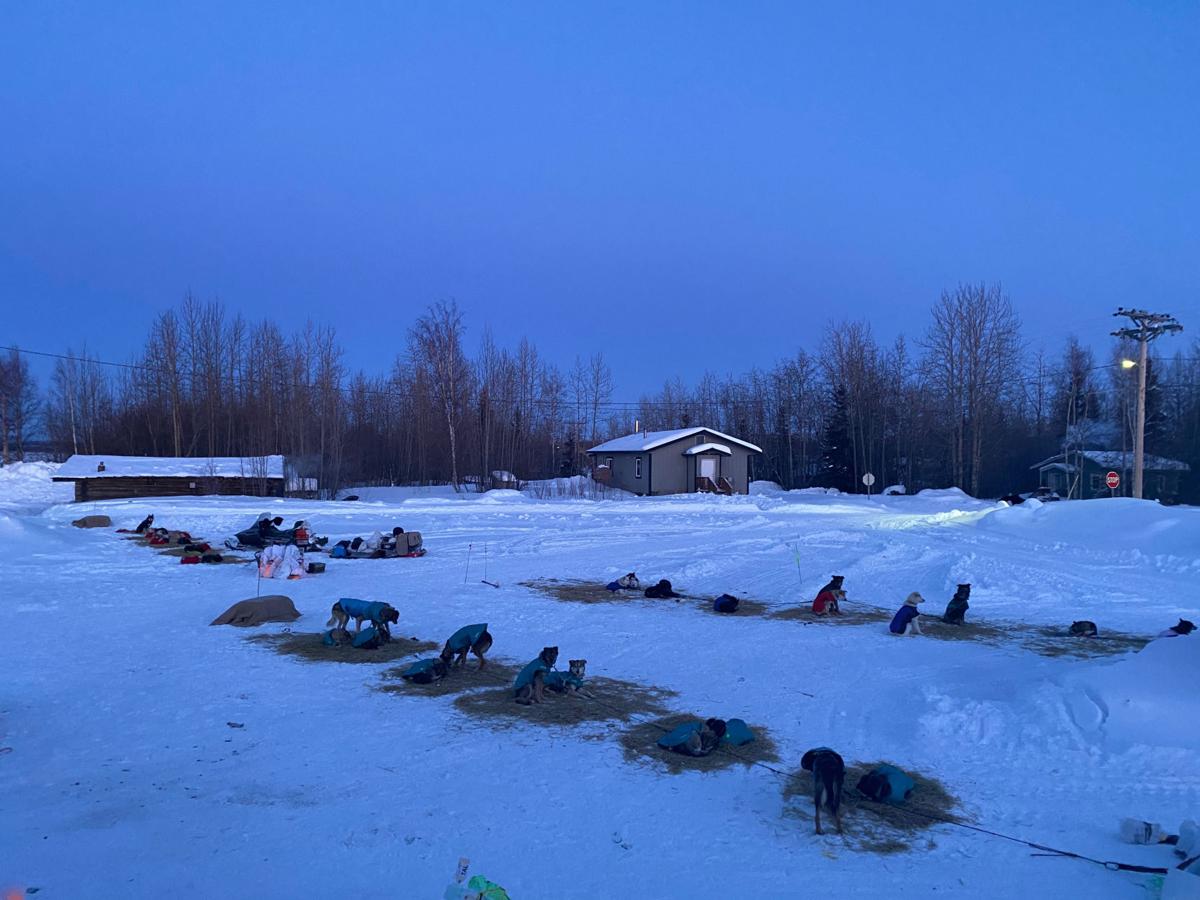 Dog teams take a break at a checkpoint in Manley.

Eleven of the thirteen participants of the 2020 Serum Run expedition line up for a photo on the second day of the trail.

A photograph uploaded to Facebook on March 1 by Kirsten Bey shows Stephanie Johnson's dog team running the trail. Bey was later hospitalized after being struck by a snowmachiner just outside of Galena.

Two of the dog teams rest up in Galena, which is where Forto had to drop out of the expedition due to technical issues with his snowmachine.

Dog teams take a break at a checkpoint in Manley.

On Feb. 22, a group of five mushers and eight snowmachiners left Nenana in an attempt to reach Nome via the historic Serum Run trail. The trail has been completed by mushers numerous times over the years to commemorate a 1925 expedition, which sought to get vital medicine to Nome during a diphtheria outbreak. Prior to this year, the last year it was completed was 2011.

This year’s expedition was the brainchild of Robert Forto, a resident of Willow who’s been mushing dogs since 1994 — and who is using the expedition as the thesis for a masters degree in sports management, specializing in outdoors adventure sports.

Twelve days in, the group is still on the trail, but they are now two days behind schedule. On Thursday the News-Miner corresponded via text message with Forto, who explained that the expedition has been beset by mechanical issues with snowmachines, extremely cold temperatures, tricky terrain and an accident that resulted in the hospitalization of one of the mushers.

After leaving Nenana at 2 p.m. on Feb. 22, the group made it to Old Minto late at night. A few days later, Kirsten Bey wrote a Facebook post explaining that the first day ended up being “much longer than expected,” because they “missed a turn.” While it was a successful day, Bey noted some of the difficulties that the group immediately had to face.

“The dogs did great. We had to slog through 6 or more miles of no trail, deep soft snow to get to Old Minto but the dogs never wavered,” she wrote.

The following day, the team set off on a 35-mile leg and safely made it to Beaver Point Lodge, where they stayed for the night. “Myles Thomas and his wife are the owners and they are cooking for the group tonight. A well earned treat,” read an update posted on Facebook by Forto.

Day three saw the group make another 35-mile leg to Manley Roadhouse, overland and on the river. This is where the trouble started. According to Forto one of the snowmachiners left the expedition at this point, due to “a health concern.” Beaver Point Lodge owner Myles Thomas flew the machiner back to Fairbanks, while Susannah Rose traveled up from Willow as a replacement.

On Feb. 25 the group was in Manley, 100 miles from Nenana. According to Forto, the group opted to stay an extra day there to regroup.

“This will be our last night in a bed until we arrive in Nome,” he wrote on Facebook. “So far the trails have been beautiful BUT it is very deep snow, if we get off of it and we have been dealing with a lot of stuck machines. That is to be expected.”

On Feb. 26 — by that point, one day off schedule — the group set off on the 65-mile route to Tanana. That day, the team got their first taste of the dangers of the extreme cold; Forto’s in-reach froze. Forto posted an update to Facebook stating that the group was doing well and noting that many of the dog teams hadn’t run a distance of that length in one go until that point, even during training. Forto signed his message off “Life in Paradise,” and, the following day, reported that the previous night's screening of “ATTLA” was “a hit.” But over the next two days, the group would have to cover 130 miles — and many more hurdles would present themselves.

On the evening of Feb. 27, an update stated that Forto and trail boss Phil Pryzmont — the only member of the group who has completed the Serum Run before — arrived at Boneyard Cabin and “proceeded to get stuck in deep snow.” The pair went about digging their snowmachines out as other members of the group began to arrive, but then another problem popped up: Forto needed a replacement part for his snowmachine. After calling various stores, Forto’s wife, Michele, finally made contact with a friend who could get the part to Robert quickly.

An update posted on the following evening, however, reported ever-more obstacles. That day, two members of the group remained at Boneyard Cabin until late afternoon, after getting stuck on overflow. While the pair eventually managed to get moving, they didn’t reconvene with the rest of the group until 3:30 a.m. An update posted to Facebook later that morning stated the trail conditions and temperatures were “starting to take their toll on machinery and human spirits.”

On Feb. 29 Forto wrote on Facebook that everyone had made it to Ruby safely. The next day, musher Stephanie Johnson celebrated her birthday, as the group made the 50-mile leg to Galena. A multitude of well-wishes were sent, and the group were making good progress — until disaster struck.

That evening, around 8:30 p.m. one of the group’s mushers, Kirsten Bey, was struck by a snowmachiner, about five miles outside Galena. Bey, who is 64, was medevaced to Fairbanks Memorial Hospital. According to Troopers, she was struck from behind and the snowmachiner is now cooperating with an investigation into the incident.

On the afternoon of March 2, Forto wrote on Facebook that Bey was receiving treatment and that the prognosis was good.

“Her dogs are here with us and all safe and taken care of. Thank you to Bering Air, they will be back home in Nome tonight,” Forto wrote on March 2. “We are staying an extra day here before the group moves down the river toward Nulato.”

Bey is now back Nome — where she’s from — and is now recovering from a broken leg.

That incident wasn’t the only setback that the group experienced during the Ruby-to-Galena leg. On the evening of March 2, Forto wrote on Facebook that his snowmachine needed more repairs and the parts would not be available in time for him to continue. As such he was forced to drop out.

“I am sending it (the snowmachine) home to Anchorage,” he wrote. “My hope is to catch back up with the group in Unalakleet and onward to Nome. We have had a couple days of deep overflow and it did a number on my steering and can’t turn the skis.”

As of Thursday, he was still back home, looking for a replacement snowmachine.

The team pushes on

On Tuesday, the team left Galena for Nulato. Prior to leaving, snowmachiner Suzannah Rose decided to drop out of the expedition, leaving four dog mushers and six snow machiners on the trail. A Facebook update posted that morning noted, “Traveling across Alaska in the winter is especially rough. Add very deep snow, cold temperatures and slow travel and you have teams bog down on trips like this.” The remaining members made it to Nulato late that evening.

Late Wednesday evening, a Facebook update stated that the team had made it to Kaltag after “six long days on the Yukon.” In a message sent to the News-Miner on Thursday, Forto wrote that the dogs are doing well and the team is in good spirits. The snowmachines, however, are “having a rough go at it” and Forto noted that some of them are in need of daily repairs due to the heavy loads of around 1,000 pounds, deep snow and slow speeds. As such, trail boss Pryzmont was spending time on Thursday looking for a local welder. In his messages to the News-Miner, Forto described some of the other struggles the team have faced thus far.

“We camped two nights on the Yukon and it was probably minus 50,” he wrote. “The snow is very deep. Some places up to your chest. We have dealt with overflow several times and once on the Yukon it took a couple hours to get everyone safely across.”

But Forto’s optimism shone through. He expressed profuse thanks to all of those who have hosted the group, calling the hospitality of the villages “nothing short of amazing.” He also praised Pryzmont, referring to him as “awesome.”

“Phil our trail boss said on day 1, ‘it’s my job to get everyone safely to Nome.’ His experience is unparalleled and his willingness to go the extra mile is nothing short of amazing,” Forto wrote. “Several nights he would arrive at camp first as a trail breaker and then turn around and go back to bring others in. One night he didn’t arrive back at camp until 4 or 5 am, just to turn around and start the day again early the next morning.”

The group is currently two days behind schedule and is due to arrive in Nome on March 12. For updates on their progress, you can visit the expedition’s Facebook page at bit.ly/3avqRfZ.