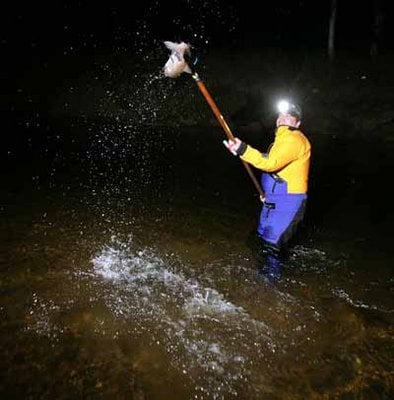 Bob Busey lifts a whitefish high into the air to keep it on his spear after catching it in the Chatanika River on Friday, Oct. 1, 2010. Sam Harrel/News-Miner 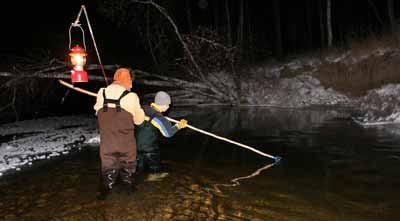 Curtis McNeill, left, holds a lantern to while 12-year-old son, Charlie, spear in hand, scans the Chatanika River for whitefish on Saturday night off the Elliott Highway. The McNeills spent about an hour and a half stalking whitefish but failed to spear any. "We scared a few," Curtis McNeill said. Tim Mowry/News-Miner 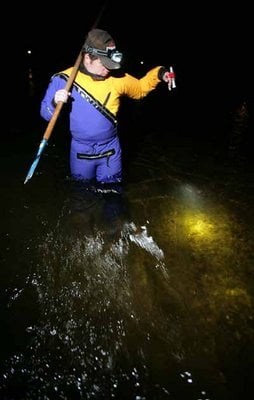 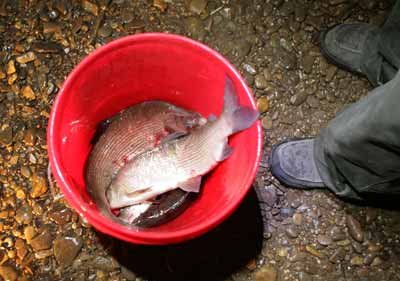 A bucket of whitefish sits on the bank of the Chatanika River on Friday, Oct. 1, 2010. Bob Busey took two trips to the river to complete his harvest tag using a personal-use permit. Sam Harrel/News-Miner

Bob Busey lifts a whitefish high into the air to keep it on his spear after catching it in the Chatanika River on Friday, Oct. 1, 2010. Sam Harrel/News-Miner

Curtis McNeill, left, holds a lantern to while 12-year-old son, Charlie, spear in hand, scans the Chatanika River for whitefish on Saturday night off the Elliott Highway. The McNeills spent about an hour and a half stalking whitefish but failed to spear any. "We scared a few," Curtis McNeill said. Tim Mowry/News-Miner

A bucket of whitefish sits on the bank of the Chatanika River on Friday, Oct. 1, 2010. Bob Busey took two trips to the river to complete his harvest tag using a personal-use permit. Sam Harrel/News-Miner

FAIRBANKS — Clutching a spear in my right hand and hoisting a lantern in my left, I felt like a caveman as I waded the icy waters of the Chatanika River looking for whitefish on Saturday night.

Granted, prehistoric man didn’t have the luxury of neoprene chest waders and chopper mitts to combat the cold or a propane-powered lantern to cut through the darkness, but there was still something primitive about wading up and down the icy waters, spear in hand, as I stalked my prey.

The temperature was a chilly 10 degrees. Steam rose off the water in the glow of the lantern light. The river had already started to freeze, evidenced by large sheets of shelf ice clinging to both banks. Stars twinkled in the dark, clear sky, accompanied by a half-plus moon. A band of green northern lights stretched across the sky to the north.

All that was missing were the whitefish.

My left arm was getting tired from holding the lantern. My feet were growing numb in the cold water. My patience was growing thin.

Then, out of the corner my eye, I spotted movement. It was a fish swimming out from under the ice. I could tell it was a humpback, the biggest of the three species of whitefish that inhabit the Chatanika River. It looked like the size of a small salmon magnified under the water.

My adrenaline started pumping. Slowly, I pulled back my spear, a small, trident-like fork with six barbed prongs and a 10-foot long handle. Then, just as I was preparing to strike, the fish darted under the ice and disappeared.

Standing there in the moonlight holding my spear, I could relate to how cavemen must have felt.

Spearing whitefish in the Chatanika River was considered a rite of fall 20 years ago.

Each fall, whitefish migrate up the river to spawn near the Elliott Highway bridge. For many years, droves of Fairbanksans made the 20-mile drive north to stab as many whitefish as they wanted. There were no bag limits and spear fishermen took advantage.

In 1987, spear fishermen caught more than 25,000 whitefish during the fall spawning season. After studies showed that the high harvest rates were not sustainable, the Alaska Department of Fish and Game placed limits on the popular fishery a short time later but it was too late by then. Citing declining populations of whitefish as a result of overharvest, the department closed the spear fishery in 1994.

It wasn’t until four years ago, after more studies showed the population of humpback whitefish had recovered, that the department re-opened the spear fishery on a limited basis.

Judging from the demand for permits, which are issued on a first-come, first-served basis, the Chatanika spear fishery is still a hit with folks in Fairbanks, even with a 10-fish limit. This year, the 200 permits were gone in less than two days. When I showed up on the first day permits were being issued, the department had already issued 80 permits in the first two hours.

The spearfishing season in the Chatanika lasts only a month. This year the season opened on Sept. 24 and it will close on Oct. 24, though judging from the amount of ice on the river last weekend I’m not sure there will be any open water left on the river this weekend.

Spearing is allowed downstream of the Elliott Highway bridge to the trans-Alaska pipeline, a distance of about seven miles, but most of the fishing is concentrated near the bridge.

There are three types of whitefish in the Chatanika River. The largest, and not surprisingly most popular among spear fishermen, are humpback whitefish. They get their name from the small hump they have behind their head. A good-sized humpback is 20 inches long and weighs 2 or 3 pounds.

The other two species — least cisco and round — are smaller and narrower than humpbacks, resembling cigar-shaped herring, and don’t have as much oil.

After taking his first stab at spearfishing this year, Bob Busey is hooked.

“It was awesome,” said Busey, who filled his 10-fish limit over the course of two weekends in late September and early October. “It was a total kick in the pants.”

The first weekend, Busey used a headlamp and flashlight taped to his wrist for light.

“We got three fish in an hour and a half,” he said.

The next weekend, he returned with a lantern and speared another seven fish in about two hours.

The way Busey describes it, there’s not much skill involved in spearfishing.

“What you do is stand upriver or down river from a bunch of people who are making a bunch of noise and they kick fish toward you,” he said. “You see one and try not to stab your feet. They sort of circle toward you and you just stab the hell out of it. It’s total cake.”

That wasn’t necessarily the case for me. I managed to hit just one of the three fish I attempted to spear over the course of two hours on Saturday night. A few others darted under the shelf ice before I could even attempt to stab them.

Curtis McNeill and his 12-year-old son, Charlie, who were stalking a hole just downstream from me, had similar luck. They came away empty handed after an hour and a half of wading the river with Curtis holding a lantern attached to the end of a pole over his shoulder while Charlie walked in front of him, spear at the ready.

“We scared a few,” the elder McNeill said with a smile.

“I missed one that was this big,” a disappointed Charlie said, holding his hands about two feet apart.

Farther downstream, the trio of Trent Gustafson, Thomas Ebenol and Sean Rober were using flashlights as they waded through a small patch of open water searching for fish. It was their second night in a row spearing.

“We had a lantern yesterday and we got one in an hour before the (lantern) handle fell off,” the 20-year-old Gustafson said. “Then we switched to flashlights and got like five in an hour. I don’t know if they could see our legs when we were using the lantern or what.”

It was Gustafson’s first time spearfishing.

“It’s pretty exciting,” he said. “The first one I stabbed I was really excited and I started to pick it up and it got off and the current took it away. What we started doing after that is when one guy gets one he’ll hold it there and another guy will come over and stab it again.”

They returned Saturday night in hopes of filling their limits but left with only one more fish.

“I’m definitely going to come out next year, but maybe a little earlier in the season,” Gustafson said. “This is a lot of fun.”

Due to conservation concerns, the department’s harvest goal for the spear fishery is 1,000 whitefish, which is why only 200 permits are issued, Audra Brase, Fairbanks area biologist for the the Alaska Department of Fish and Game, said. Last year’s reported harvest was 750 fish and Brase said that doesn’t take into account how many fish are wounded but get away and end up dying later.

“We know there’s some morality,” she said, adding that’s one of the reasons she advises people to use spears with barbed tines or prongs.

The harvest has increased each of the past three years, mostly as a result of more permits being issued and more people fishing (see graphic). The first two years, only about half the permit holders reported fishing. Last year, about 65 percent of permit holders fished.

The average catch per permit all three years has ranged between five or six for people who fished.

The only complaints she gets about the fishery is that the department doesn’t issue enough permits, Brase said. A bag limit of 10 fish satisfies most people, she said.

That’s she did with the 10 fish her family caught in early October and it’s what most fishermen do with the bigger humpback whitefish, Brase said.

Busey said the same thing. He has smoked, grilled and poached his whitefish.

“Every time we’ve tried them it’s been great,” he said.

All three species can be used for burbot bait and Brase said she has heard about people pickling least ciscos.

I finally did manage to impale a whitefish with my spear and I have to admit, it was an adrenaline rush.

The fish, a good-sized humpback, appeared out of nowhere and floated right in front of me. I slowly lifted my spear and quickly thrust it into the water, hitting the fish just behind the head.

Remembering what Gustafson had said about losing his fish, I pinned the fish to the bottom of the river and kept it there. I could feel it struggling as a red cloud of blood billowed up in the water around the fish, illuminated by my lantern. It felt so barbarically good it was scary.

I missed another stab at a humpback a little while later and spotted several least ciscos and rounds — I wasn’t interested in the smaller fish — before calling it quits for the night and heading back to the fire where my wife and son were waiting to thaw out.

When I told Brase a few days later that I only managed to spear one humpback whitefish, she laughed.

But then, in a moment of compassion, Brase speculated that it might have been too late in the season by the time I went. Most of the fish may have already spawned and headed back downstream to the Minto Flats or Tanana River to spend the winter, she said. Once whitefish spawn, they don’t hang around long, she said.“I bet they were moving out,” she said. “Once they spawn they take off really fast. It’s just a matter of a couple of days and they’re gone.”

And as for the one fish I did bring home, I froze it and plan to use it for burbot bait later this winter when I try burbot fishing for the first time.

I’ll let you know how it goes.