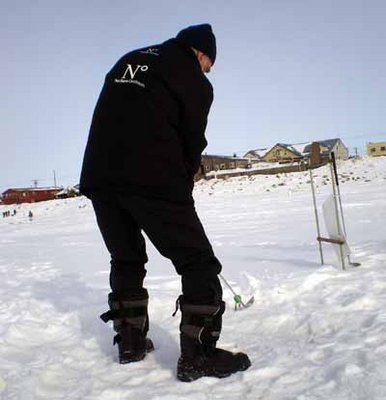 Bill Sutherland tees off from an upside down liquor miniature. James Brooks/News-Miner 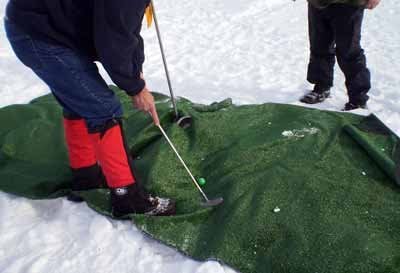 Bering Sea Ice Classic greens are not what one would call manicured. James Brooks/News-Miner

Bill Sutherland tees off from an upside down liquor miniature. James Brooks/News-Miner

Bering Sea Ice Classic greens are not what one would call manicured. James Brooks/News-Miner

NOME, Alaska - At most golf courses, a 100-yard hole would be laughed at.

The Bering Sea isn’t most golf courses. But it’s the site of the annual Eliot Staples Bering Sea Ice Classic, a six-hole golf tournament that takes place during Iditarod week in Nome.

It’s run as a best-ball scramble: Each player on a four-person team hits, then all four hit again from the spot of the best previous shot.

The catch is that you’re playing on Bering Sea ice with a collection of clubs donated from back closets across Nome.

It’s $50 to sign up, and the proceeds go to the Lions Club of Nome, which runs the event. Since I didn’t have a foursome, I was paired with two folks who already knew each other and one person who, like me, didn’t know anyone.

Bill Sutherland, from Aberdeen, Scotland, was a handler for Scottish musher Wattie MacDonald and knew Hunter Davis of Ketchikan. Clayt Pollock was our fourth and the only one with experience. This was his 11th tournament. Sutherland was an experienced golfer, while Davis hasn’t been on a golf course since 1979 and was particularly proud about it.

Our foursome was a bit different in that we had a fifth: musher Pat Moon, who had scratched after hitting a tree in Rainy Pass and breaking a few bones. He had struck up a friendship with Sutherland, and had kept on to Nome. Though disappointed that he couldn’t finish the race, he made the best of it and volunteered as our caddy and scorekeeper, providing a steady stream of jokes as we walked.

We didn’t have all that far to go. None of the holes were longer than about 120 yards.

Our tees were cut-off shotgun shells, and we loaded up with green golf balls, a collection of the finest liquor miniatures you’d never drink if you had to pay for them and a grab-bag collection of rusty irons.

The weather was perfect, though. About 35 degrees, brilliant sunshine, and none of the cutting wind that seaside towns are known for.

The first tee was atop the stacked-rock breakwater directly behind the back door of Breakers. Our shots went right, left, center — all into snowdrifts or cracks in the ice. That taught us the first lesson of ice golf: Cracks in the ice are natural golf ball magnets.

The walking, thanks to the snow, wasn’t that bad. The toughest part was climbing the breakwater between the ice and downtown Nome.

Our second shots landed us in the Nome National Forest, a collection of Christmas trees hammered into the ice for the occasion, and on the green. “Green” probably isn’t the right term. “Off-brown” might be a little better. The texture also left a bit to be desired. Crumple up a piece of paper and throw it on the floor. That’ll give you an idea of what we were dealing with.

Our game became a regular pattern: Drives would go every direction, we’d find maybe one or two of the shots, then use the best one to chip toward the hole and use a third shot to go into the hole.

After the third hole, we took a break at the Polar Bar — mandated in the rules.

After that, we started on the second half of the course. We broke open the liquor miniatures and quickly found out why they were so eager to get rid of them. On the fifth hole, Sutherland took one and implanted it neck-down in the snow to use as a tee.

That hole was the longest on the course, and we figured it’d take a while to skip our balls across the ice toward the green. Instead, Sutherland’s shot sailed off the bottom of the plastic bottle, straight across the ice, not 15 feet from the hole. When he looked down, the bottle was still there, the bottom carried clean away with the rum still inside.

That bottle tasted a little better than the rest.

Thanks to Moon, we didn’t run out of golf balls. That wasn’t for lack of trying.

We also had to dodge the errant shots of other golfers, one of which came close to smacking Davis in the head.

We finished with an overall score of 20, which wasn’t too bad, we thought.

We found out how good it was that night at the Polaris Bar, where the awards were held. The announcer pronounced a three-way tie for second place, and we hurriedly asked what their score was. Twenty-one, came the reply.

We each got a nice trophy, certificate, shirt, hat, ceremonial ball, scorecard, and a heck of a story to tell.