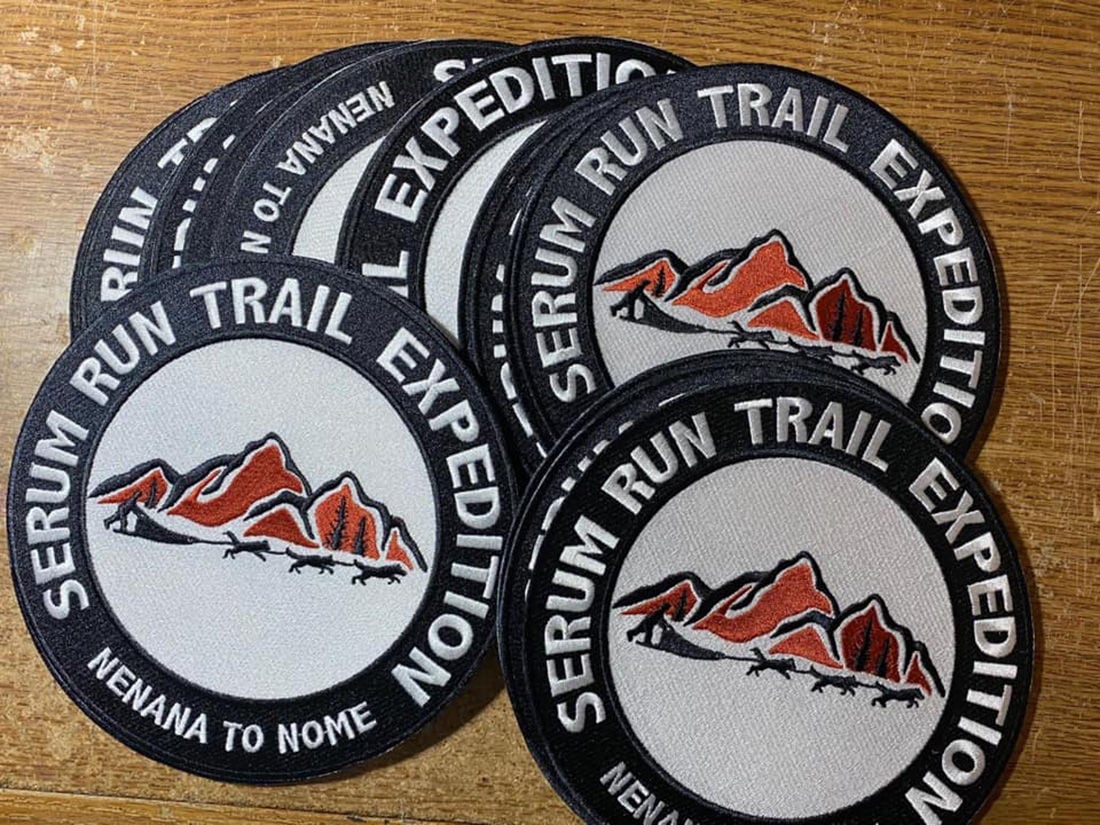 The above patches, donated by Alaska Dog Works, were given to each member of the team, to celebrate the completion of the trail. 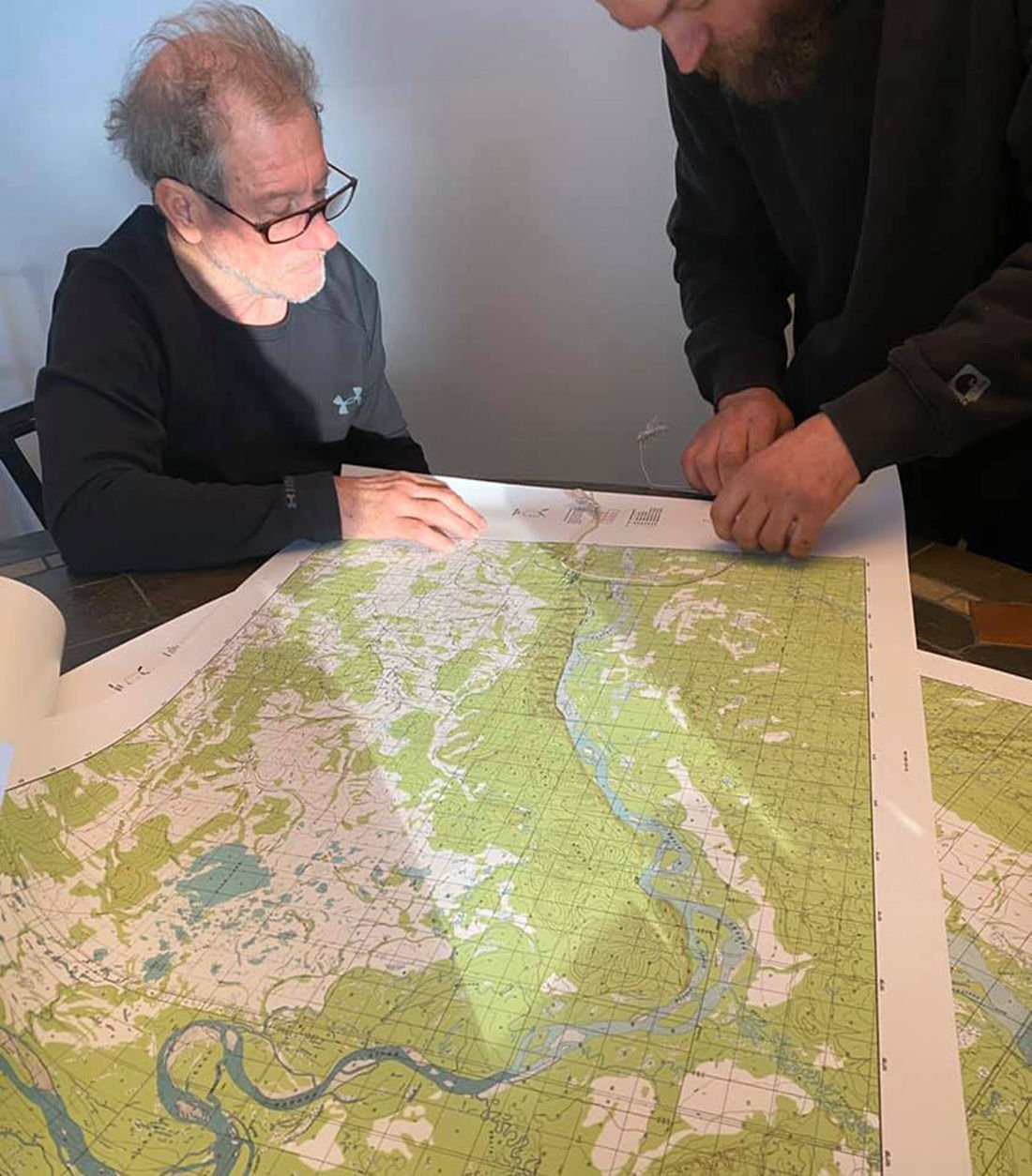 Snowmachiners Gil Van Sciver and Phil Pryzmont, who also served as Trail Boss, look at some maps of the route in Manley. 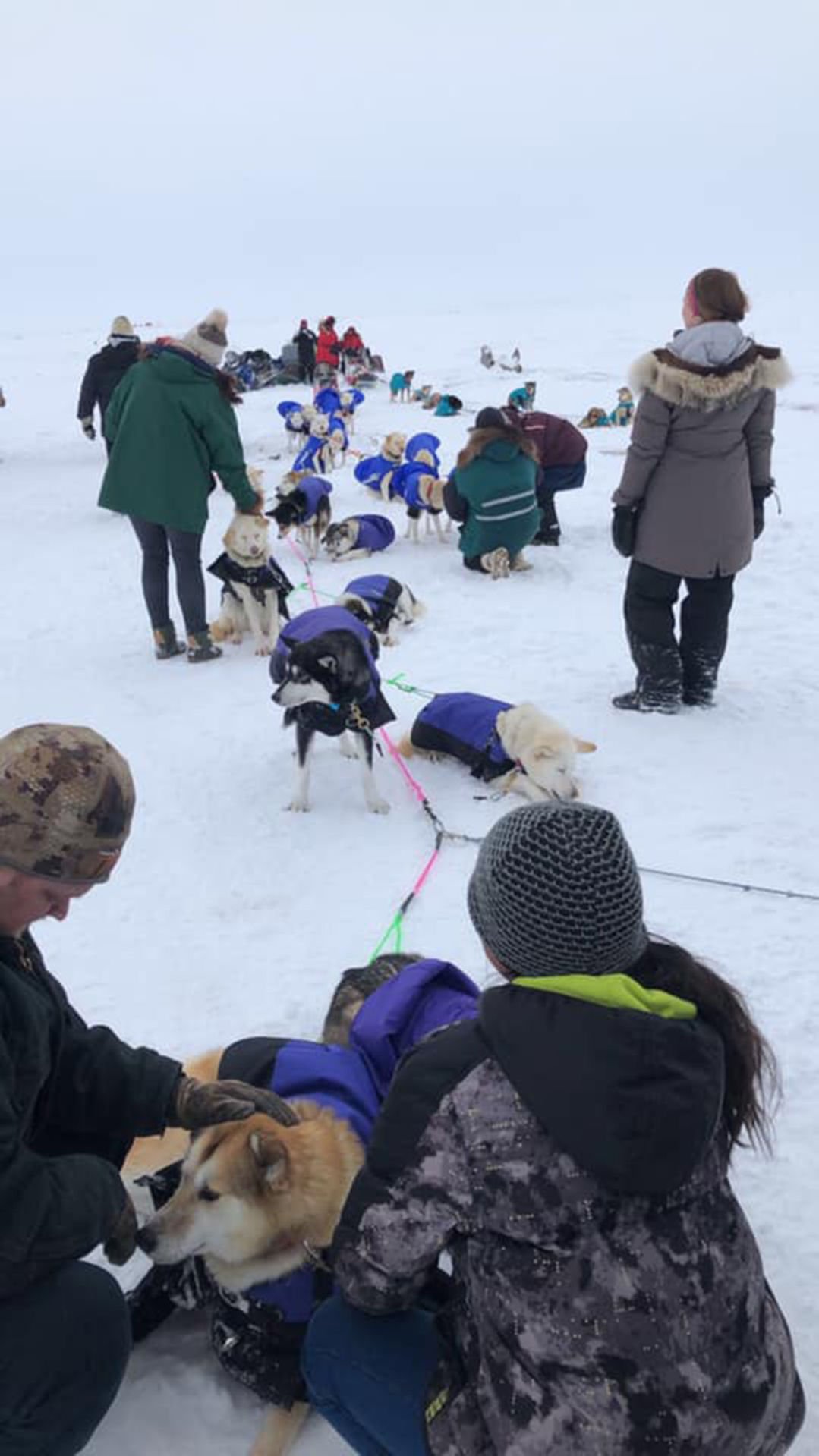 The above patches, donated by Alaska Dog Works, were given to each member of the team, to celebrate the completion of the trail.

Snowmachiners Gil Van Sciver and Phil Pryzmont, who also served as Trail Boss, look at some maps of the route in Manley.

On Feb. 22, a group of five mushers and eight snowmachiners left Nenana in an attempt to reach Nome via the 674-mile historic Serum Run trail. On March 12, the team made it to Nome, albeit a few members short. The four mushers and seven snowmachiners who made it arrived two days behind schedule, after encountering various trails and hurdles, including mechanical issues with snowmachines, extremely cold temperatures, river overflows and medical issues with both humans and dogs.

The Serum Run trail has been completed by mushers numerous times over the years to commemorate a 1925 expedition, which sought to get vital medicine to Nome during a diphtheria outbreak. Prior to this year, the last time it was completed was in 2011.

This year’s expedition was the brainchild of Robert Forto, a resident of Willow who’s been mushing dogs since 1994 — and who is using the expedition as a thesis for a masters degree in sports management, specializing in outdoors adventure sports.

“They had just about every obstacle in their way from deep snow, waist deep overflow, very cold temps, team members leaving for various reasons, a musher getting hit by a snow machine, a snow machine that burned up, medical evacuations and more but they overcame and the trip was a success!” Forto wrote in a message to the Fairbanks Daily News-Miner on Thursday. “Unfortunately I had to pull out in Galena because my snow machine broke down. It was not something I wanted to do but I didn’t have much choice. I was lambasted on social media saying that I abandoned the group. That is not true. This was a project that I poured my heart and soul into for more than five years.

“I’m very proud if everyone that finished and I’m sure they will have memories that will last a lifetime,” he added.

Two weeks ago, the News-Miner published an article about the group’s progress up until they reached Kaltag, which you can read here at bit.ly/2WpM5rX. Below is an account of the team’s final week on the trail.

On the evening of March 5, the team was making its way to Old Woman Cabin. That morning one of the snowmachiners decided to leave the trail for a medical check. Via a Facebook post, Forto described the situation as “a bit of a scare,” but added that the results came back OK and the snowmachiner planned to rejoin the team in Unalakeet.

Forto reported that a couple of the group’s snowmachines got stuck in deep snow in the area for about four hours — which was a recurring tribulation along the trail. Beyond that another of the snowmachines was in need of repair to the point whereby it had to be towed for part of the journey.

That night, the team camped nearby Old Woman Cabin, which local lore states is haunted.

“Legend has it that many years ago a lady died in the cabin and now it is haunted and her ghost loves candy, especially chocolate so most people including Iditarod mushers toss a few pieces as they ride by,” Forto wrote. “If all goes well the group will make their way down trail to Unalakleet. There is still more than a third of the trip to go or about 250 miles so it is far from over.”

On March 6, the going was slow.

“It looks like they didn’t get started down the trail until about 6 p.m.,” Forto wrote. Hopefully they will make it to Unalakleet tonight or early tomorrow. Snowmachiner Lou is there and trying to track down the drop bags for the next resupply.”

By the morning of March 7, the group had made it to Unalakleet, the largest village they’d visited since leaving Nenana. Here, they were able to take snowmachines to a mechanic — but they didn’t stop for long, deciding to push straight onto Shaktoolik.

While the team made it there by evening, another snowmachiner had decided to pull out. By this point a couple of the mushers had dropped dogs, for various reasons. One musher had to send several dogs home because they were in heat.

“Dogs in heat can cause the boys in the team to go crazy on a dog team. It can be a management issue but more than anything the males often don’t rest well at camp and sometimes even have a hard time running on the line because their mind is elsewhere, if you know what I mean!” Forto wrote on Facebook.

One of the tiring aspects of a long-distance dog-sledding expedition like this are what Forto refers to as the “chores” of dog-care.

“The mushers have to heat up water in their cookers to make a soup in similar consistency to beef stew, then let it sit for about 40 minutes. They then feed the dogs. Before they leave they have to pack all their gear, check all the dogs feet, apply ointment if needed to each foot, put on booties and dog coats, do a quick clean up of the spot, attach all the lines and pull the hook!” Forto wrote. “The same thing again in the evening, plus massages, checking for sore joints on the dogs, possibly walking them around on leash to evaluate, snack the dogs — usually meat or fish in pieces about the size of a snickers bar, lay out straw. Of course lots of belly rubs and head pats along the way.”

These activities can take up to two hours and are conducted twice a day. This may be part of the reason why reports posted on the evening of March 8 stated that the group were still in Shaktoolik, having stayed to rest for 24 hours. The mechanical issues that the group was facing were also not abating. In fact, Forto said one of the snowmachines caught fire while it was being welded during this leg of the trip, and was a “total loss.”

While this may have delayed progress slightly, it didn’t deter those remaining on the trail. By the morning of March 9, the group had passed through Koyuk and were continuing on to Elim.

“Just three more nights until they are in Nome! It’s been a rough go at it but they will make it!” Forto wrote on the evening of March 9, after the group arrived in Elim. “Tomorrow they travel to White Mountain and if you are an Iditarod fan you know that it is here that the mushers have a mandatory eight hour rest before racing toward the finish.”

On March 10, the group made it to White Mountain. The following morning they set off for the Nuuk camp. On the evening of March 11, Forto wrote “The group is spending their last night on the trail about 20 miles from Nome. They will finish sometime tomorrow. It’s been a long, difficult road....”

On March 12, around 3 p.m. the remaining four mushers and seven snowmachiners arrived at Middle Beach in Nome.

“We want to send out a sincere thanks to everyone that helped, volunteered and offered their time and services,” Forto wrote. “The logistics of a trip like this are mind-boggling and while we had some hiccups along the way, the event was a success because the group accomplished their mission!”