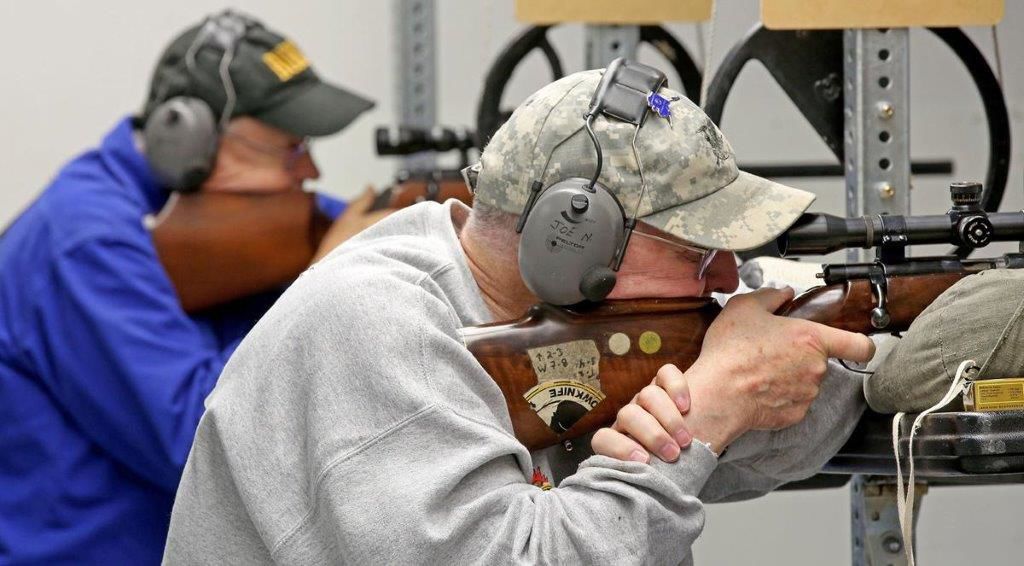 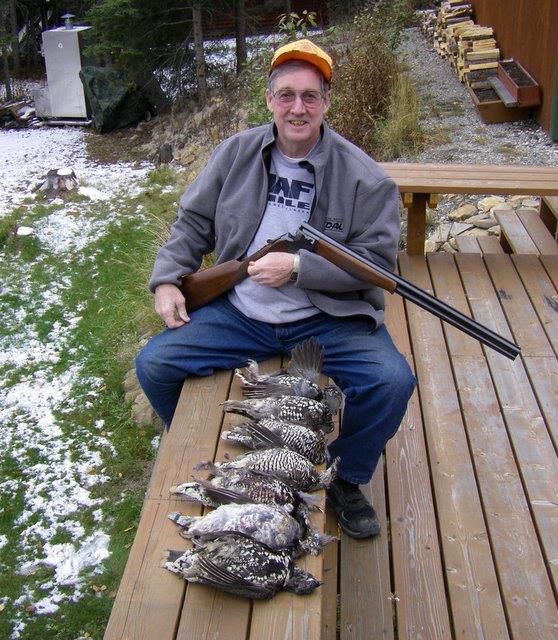 Nava displays his kills after a successful morning grouse hunt in 2010 in Fairbanks.

Nava displays his kills after a successful morning grouse hunt in 2010 in Fairbanks.

If you live in Alaska and have taken a class in gun safety, there’s a good chance you know Joe Nava. Over the 56 years during which he taught gun safety and various other firearm classes, Nava said he reached an estimated 60,000 students.

“I loved the teaching,” Nava said. “I love to teach people how to be safe, accurate and responsible with their firearms.”

While he’s now retired at the age of 88, Nava has collected his insight and philosophy into a memoir titled “Not Your Average Joe.” Billed as a “selected autobiography and Joe’s wisdom on shooting,” the book covers significant events in Nava’s life, as well as offering firearm safety lessons, hunting tips and advice for those new to shooting. In September, Nava talked about the book during an interview in what used to be the classroom where he would teach courses on Alaska’s concealed handgun regulations.

“The demand was such that I taught that class 800 times. I quit at the end of 2018. I retired from all teaching. While I was teaching those 800 classes, I was also teaching bear-safety classes, and I was qualifying security guards, I was teaching basic rifle, basic pistol. I was busy teaching every day,” Nava said.

The interview below has been edited for clarity and brevity.

Why and how did you decide to write this book?

I started — three years ago, maybe — writing this book, with Laura (Berkowitz)’s help. Her name is on the book, too. She knew publishing; I didn’t. And she’s a very good writer. So, all I would do is talk into the microphone. And I would talk through my whole life, in chapters. All of those tapes will be in the university archives. And it took two years to get this thing built. It wasn’t easy. I wouldn’t write another book.

This isn’t just a memoir, it’s also instructional. Did you always intend for it to be more than just an autobiography?

No. Laura was the one who pointed out to me, part way through, that this is not an autobiography — this is a selected autobiography. I’ve been teaching shooting for 56 years and I’ve been training other instructors to teach shooting. I’ve trained over 2½ thousand NRA-certified instructors in Alaska. And they are out there teaching people to be safe and responsible with their guns. I wanted to pass the gun safety on to as many people as I can. So, originally I thought of it as an autobiography, I thought my kids would like to read it. But partway through I realized, it’s got to be more than just an autobiography. It’s a list of stories that chronologically document my life — and the pitfalls I ran into and how I ignored them, stepped over them and kept going and achieved whatever it was I wanted to achieve.

Did that inform the structure of the book? For example, in one of the early chapters you describe an accident with a .22 rifle from when you were 12 years old, which seems like a formative moment, given how much of your life you’ve dedicated to gun safety.

It probably was a formative moment, but I had no idea of that at the time. And I never thought of that as formative, throughout my young life. Later on, when I was much older and I was teaching people, somebody would say, “Why do you do this? Why do you spend all of your time teaching people about gun safety?” And I thought about that and I thought, “Well it’s probably because I’ve seen firsthand the problem when there’s a lack of gun safety.” So that was probably an impetus that made me want to teach gun safety through all of my life. The gunshot in the leg wasn’t an epiphany in the moment, but in the long run when I look back it’s got to have had some effect on the way I handled my young life.

The book documents various different jobs you’ve had. Are there any that left a particularly large impact on you?

The formative part was shooting on the university rifle team. That was when I realized the value of shooting. I had been shooting in my younger life, but that was as a hunter, shooting a shotgun back east. I did very little with a rifle back east. I was from an Italian immigrant family and they all used single-barreled shotguns. It was easier to kill something with a shotgun. And I never really knew there was a sport of rifle shooting until I was a sophomore. Then the coach talked me into coming onto the rifle team.

What I realized in shooting was: shooting prepares you for life. Because, with shooting, you have to totally concentrate on what you’re doing, and eliminate everything else from your mind. That’s the hard part of shooting — the mental part of shooting. Concentration is the most important aspect of success with shooting. You’ve got to be able to concentrate on the fundamentals and let nothing else interfere. I decided that if I can do this in shooting, I can do the same thing in life. Whatever it is — whether I want a bachelor’s degree, a master’s degree — that’s my goal, this is the path to it, I will concentrate on that and I will not get deterred by anything else. That’s why I say shooting is excellent for youngsters. We need a rifle team in every high school, because that will teach the kids to be good in school, to get good grades, to set goals.

You’ve taught so many different classes — which do you think is the most important?

Those three rules are on posters all over the classroom. 1) Always keep your gun pointed in a safe direction. 2) Always keep your finger off the trigger until you’re ready to shoot. 3) Always keep the gun unloaded until ready to use. Then you’ve got the statement “Remember, treat every gun as if it is loaded” underneath.

I was intimately involved in developing those safety rules. I’ve had those sheets made and I’ve put them at the Fish and Game range, I’ve put them at the Tanana Valley Sportsman’s range. What happened was the 4-H decided that they wanted a 4-H junior shooting program. They decided, first we have to teach them gun safety, so what do we teach them? Well, Winchester has these six rules of gun safety, Fish and Game has these 12 rules of gun safety — everybody has different safety rules, and that’s not good. You’ve got to have safety rules that are the most efficient to teach and everyone has to teach the same thing. So they decided to accomplish that by calling a conference in Maryland and they invited about 50 people. Anyone involved in manufacturing guns or shooting guns was invited. And they called the NRA and said, “Can you send somebody?” and the NRA said, “Hey Joe, you’re the chairman of the junior and collegiate committee, you’re the one that ought to go to help develop these junior gun safety rules. You go.” Those are what we came up with.

The interesting thing was, on the first day, they passed around pencil and paper and said, “What do you think rule number one should be?” Most people wrote down that fourth line: “Always treat a gun as if it’s loaded.” So everybody agreed, “Yeah, that should be rule No. 1.” It wasn’t long before we realized that can’t be rule No. 1, because it doesn’t teach you anything. I haven’t yet taught you how to treat a loaded gun, so I’m not helping you at all. So we decided that can’t be rule No. 1. So we finally came down with rule No. 1, which is: “Always point the gun in a safe direction.” And a safe direction is away from any person. If the gun is always pointed away from any person, no matter what mistake you make, you can’t hurt anyone with your gun.

And the NRA is still teaching those rules. This happened 30-35 years ago. And most outfits, I’ve noticed, they’ve decided to once again teach their own rules. Unfortunately there are usually 6, 8, 10, or 12 of them. It’s too many. They’re not going to be effective. Did you ever listen to my radio program?

I’ve been doing it every Thursday for the last 14 ½ years I’ve been on KFAR teaching gun safety, along with other stuff about guns and about shooting. My program always ends with: Always keep your gun pointed in a safe direction. But you’re at the tail-end of my radio program. I just turned in my six-month notice. The last Thursday in March will be the last episode of “Joe Nava’s Shooter’s Corner.” Anyway, I’ve been pressing those three rules on that radio show every week.

In one part of the book, when you write about starting out at the University of Alaska, you mention that you were so busy with studying and your family that you went down to just eating one meal a day, supper. Is that still true?

Yes. I did that. I was filling out every hour of every day. When I joined the rifle team, I needed some extra time. That’s when I gave up breakfast. And I would study right up until bedtime and in the morning I would have a cup of black coffee and get the kids off the school and get myself to school. That worked until I realized that if I wanted to become a good rifle shooter, I needed more practice. Becoming a good rifle shooter is based on the number of rounds you shoot; that’s the key. So I decided to give up my lunch hour and I no longer took a lunch with me to school. I would get out of class at 12 and then I would run down to the rifle range, get my gear and I would shoot three offhand targets. I did that for the next three years. At home, I had supper and while the kids were clearing their table and doing the dishes, I was in the basement shooting. I set up a bullet trap in my basement. Now, I’m getting older. I’m 88 now, and I can’t eat a meal later in the day or I don’t sleep well. So I’ve shifted my one meal a day to the German system — I eat my one meal a day at lunch.

“Not Your Average Joe: A Selected Autobiography and Joe’s Wisdom on Shooting” was published April 3. You can purchase a copy at Frontier Outfitters, Mark Knapp Custom Knives, Big Ray’s, the Pioneers of Alaska Museum and various other outlets in Fairbanks.