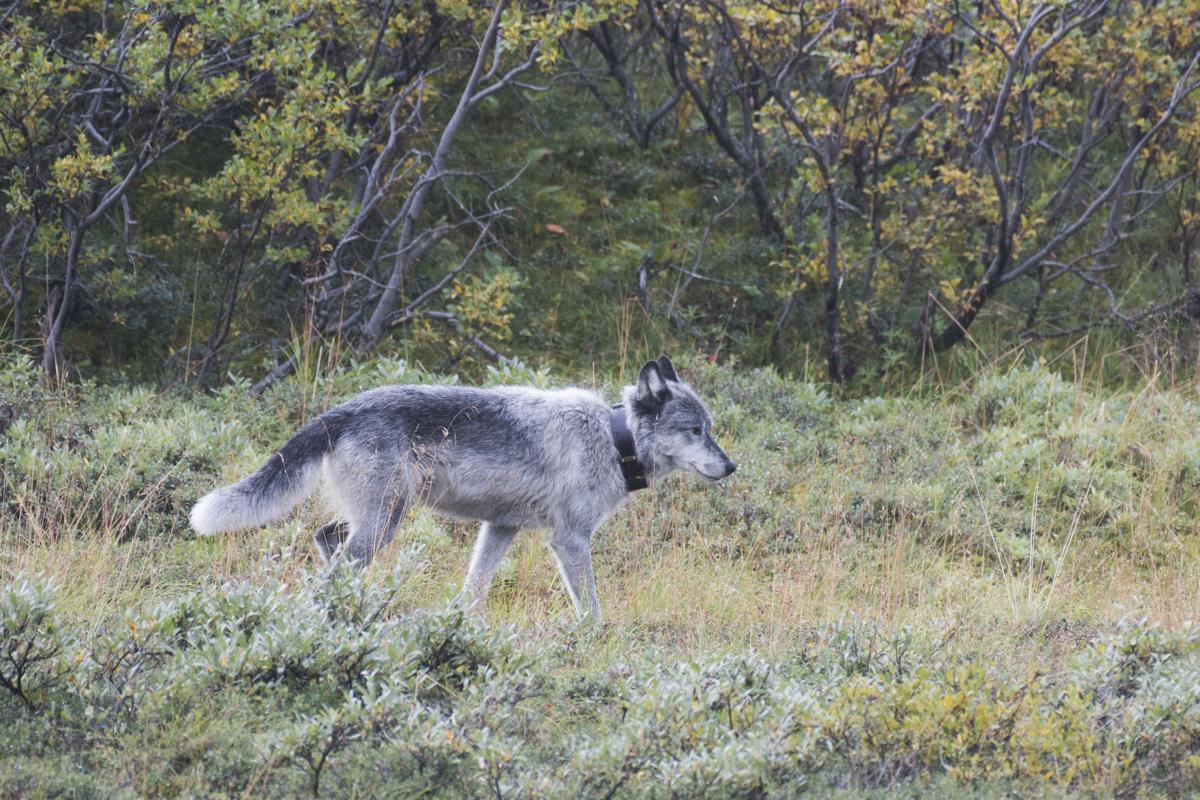 A wolf is photographed by Denali National Park staff wandering alongside the Denali Park Road, in 2017. 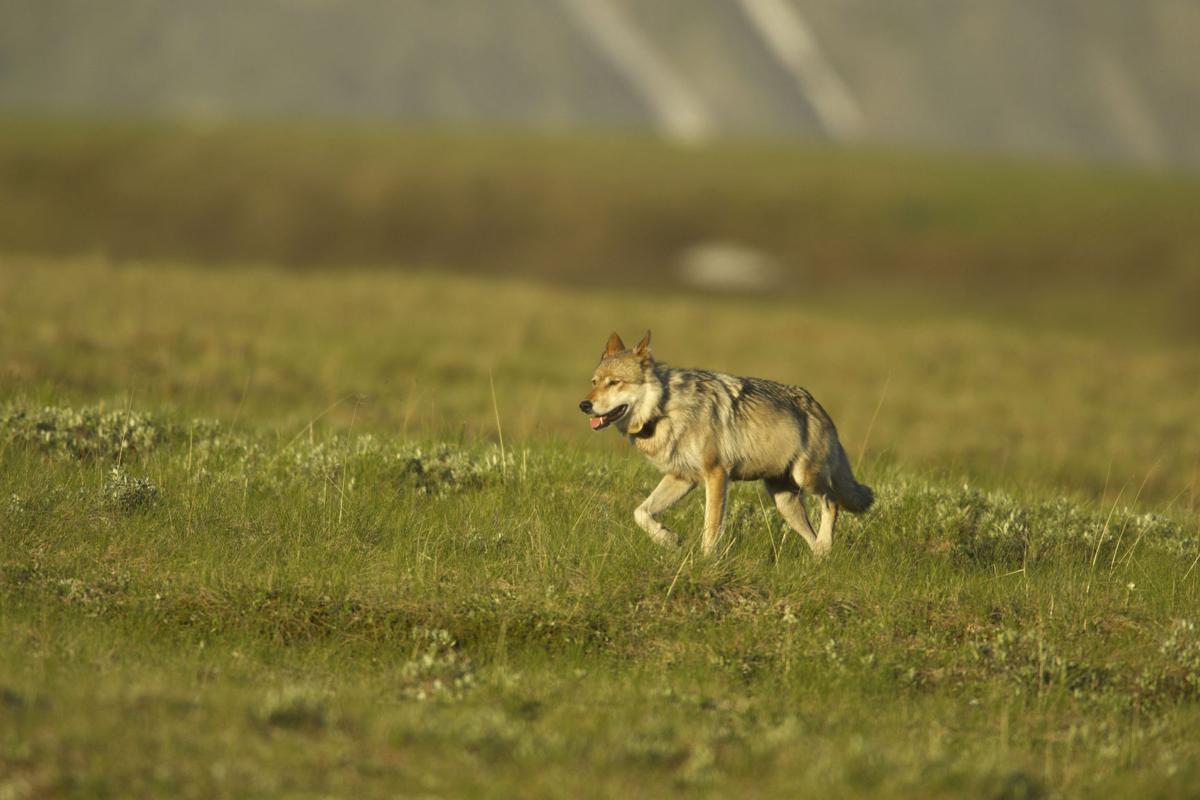 The National Park Service has submitted a proposal to the Board of Game to limit wolf hunting and trapping opportunities in the Stampede Corridor — a regulation change to which the Fairbanks Fish and Game Advisory Committee is firmly opposed.

A wolf is photographed by Denali National Park staff wandering alongside the Denali Park Road, in 2017.

The National Park Service has submitted a proposal to the Board of Game to limit wolf hunting and trapping opportunities in the Stampede Corridor — a regulation change to which the Fairbanks Fish and Game Advisory Committee is firmly opposed.

At a Fairbanks Fish and Game Advisory Committee meeting on Wednesday, discussion focused on proposed regulation changes that the state Board of Game will consider at its upcoming meeting in March.

Though the committee parsed and voted on whether it should lend its support to over a dozen proposals, the vast majority of the meeting was spent on two issues that have long been debated: a proposal that would impact opportunities for hunters and trappers to take wolves just east of Denali National Park, and a number of proposals from Resident Hunters of Alaska, an organization that aims to curtail opportunities for nonresident hunters, in favor of resident hunters.

Wolves in the Stampede Corridor

During its March meeting Fairbanks, the Board of Game will consider proposal 152. Submitted by the National Park Service, the proposal seeks to close parts of an area known as the Stampede Corridor that runs along an eastern boundary of Denali National Park to the trapping and hunting of wolves for most of the year.

It requests that certain portions of Game Management Unit 20C be closed to the taking of wolves by hunting from Feb. 1-July 31 and by trapping from Feb. 1-Oct. 31. The closure of the roughly 152 square mile area proposed by the Park Service would see the wolf hunting season cut by a third of its current length in days and wolf trapping season cut by half.

In a statement of purpose, the Park Service focuses on wolf-viewing opportunities for tourists, which it said contribute to the over $2 billion in annual economic activity related to wildlife viewing. According to the Park Service, wolf-viewing opportunities in Denali are primarily provided by one to three packs of wolves which are active near the Park Road during the summer months — and which tend to drift into the Stampede Corridor. The intent of the proposal is to protect these wolves during breeding season, February–April.

This issue has been the subject of debate for decades. From 2000-2010, the Board of Game approved a similar closure to wolf hunting and trapping year-round in order to protect wolf viewing opportunities in the park. According to a Park Service study, the probability of a wolf sighting during this period was twice that of the periods when the buffer was absent.

“It should also be noted that the presence of the buffer did not decrease the average annual number of wolves harvested in UCUs overlapping the Stampede Corridor,” the Park Service wrote, “In fact harvest was higher during the years the buffer was in place.”

The Park Service argues that seasonal closure of the corridor would result in a “impact for a few with a positive outcome for many,” citing the 400,000 annual visitors to the Park versus the one to three trappers who are active in the area in any given year.

Nicole Schmitt, executive director of the Alaska Wildlife Alliance, attended the Fairbanks Advisory Committee meeting in an attempt to convince the group to support the proposal. She framed the proposal as a compromise: it would protect these wolf packs while they’re vulnerable during breeding season, but still allow some opportunity for hunters and trappers.

“This proposal is unique in that it has a seasonal buffer specifically designed to recognize hunter opportunity in this area while acknowledging the contribution of nonconsumptive users,” she told the advisory committee. “We’re simply advocating that we share the area.”

Historically, the Fairbanks Advisory Committee has not supported attempts to curb hunting and trapping activities in this area — on Wednesday, sentiments remained the same. Committee member Mike Tinker referred to the justification of increasing wolf-viewing opportunity as a “smoke-screen.”

“No one can stand here in front of this group and say that viewing wolves is the reason people come to Denali,” he said.

While Schmitt pointed out that the Park has a mandate in terms of wildlife-viewing that it’s trying to achieve, she conceded that it’s hard to link wolf-viewing specifically to economic boon or cite it as a reason people come to Denali.

She also argued that resident conservationists are concerned for the survival of the wolf packs regardless of whether they can provide viewing opportunities. The committee, however, demurred this point — pointing out that natural disruptions of the pack are just as likely.

Committee member Mike Quinn noted that the proposed closure would occur at the exact time when the few trappers who are active in the area plan to take wolves. “February and March are very big times when people catch wolves. That’s actually one of the more productive times of the year (for trappers),” he said.

The primary sentiment of the committee, however, was summed up by Mike Kramer, who was not alone in pointing out that the proposal requires hunters and trappers to give up harvesting opportunities in exchange for nothing. He noted that the majority of hunters perceive the proposal as a small step toward the further erosion of these opportunities.

Another set of proposals that was hotly contested Wednesday, were those submitted by the Resident Hunters of Alaska, a group dedicated to advocating for a greater level of resource-allocation for Alaska residents as opposed to nonresident hunters. Formed in 2016, the 2000-member-strong organization seeks “resident priority to our game resources for future generations of Alaskans through clarification and amendment of our current laws,” according to its website.

The group made a splash last year when a member submitted a Board of Game proposal to change the resident/nonresident Kodiak Brown Bear hunting tag allocation from its current 60-40 split to a 90-10 split, allocating the vast majority of tags to Alaskans. The proposal was shot down by a board vote of 5-1.

This year, the group is back with more proposals, all of which seek a similar outcome. Proposal 52, for example, looks to change the nonresident general season sheep hunts in Units 20 Remainder and 19C to drawing permit hunts, with a limited allocation of up to 50 permits. Currently there are no limits on nonresident opportunity for these hunts and, according to the group, “consistently, the nonresident sheep harvests in Unit 20 Remainder and 19C are at or near 60%-80% respectively.”

“Resident hunters have been putting in proposals to limit nonresident sheep hunting opportunity in these areas, or to provide an earlier resident-only season, for over a decade, expressing that unlimited nonresident opportunity has led to a decrease in sheep populations, conflicts and crowding afield that negatively affect hunt quality, access issues, and lower resident success rates,” the group wrote in its proposal.

Alaska Department of Fish and Game Fairbanks Area Biologist Tony Hollis, who was present at the Wednesday meeting, said that in Unit 20A in 2019, 40 Dall Sheep were harvested by nonresidents and 48 were harvested by residents.

Advisory Committee Vice-Chair Mark Richards, who is serves as executive director for Resident Hunters of Alaska, argued that the committee should be supporting proposals like these. He pointed out that the current Board of Game chair Ted Spraker told the legislature in 2013 that he was concerned about the number of guides in Unit 20A having the potential to disrupt resident hunts.

The proposal quotes Spraker as saying “For your average hunter that goes in there for a long weekend or a week or whatever, those guys, those residents have a tough time dealing and getting game in places where you have a lot of guide competition.”

While several committee members agreed on this, support for the proposal was voted down by 8-7. The primary argument against the Resident Hunters of Alaska proposals came from those involved in the guiding industry and others who see the guiding industry as an economic boost for Alaska. This exact argument was made by committee member Virgil Umphenour, who owns a local guiding business.

“Now, why you want to do this, I can’t figure out. If you think it’s going to increase resident hunter success rate, it’s not going to do that,” he said, before pointing out that the Alaska Department of Fish and Game also gains revenue from nonresident hunters purchasing licenses and hunting tags. “When you do this, all you’re doing is cutting the budget.”

A similar debate was waged around Proposal 62, which was also submitted by the Resident Hunters of Alaska. That proposal seeks to allocate 90% of the Unit 21B, Upper Nowitna Corridor moose drawing permits to residents and up to 10% to nonresidents. The committee voted against supporting the proposal by 5-10.

The committee, however, did opt to support some Resident Hunter of Alaska proposals, including Proposal 146, which seeks to allocate no more than 10% of up to 200 permits in Unit 20A to nonresidents. There is currently no resident/nonresident allocation for this hunt.

The proposal states that when the Board of Game doubled the number of draw permits one could submit from three to six, there was a “huge influx of nonresident applications submitted by hunt booking agents.” According to data from the Alaska Department of Fish and Game, there were roughly 1,450 nonresident applications for the hunt in 2018, compared to just under 400 in 2016.

“Resident Hunters of Alaska has remained constant in advocating for a 90%/10% resident/nonresident allocation of all draw permits,” the proposal reads. “Draw permits mean there isn’t enough game for everyone to be able to hunt and in those cases, residents should have a clear priority opportunity.”

The committee opted to support this proposal, by a vote of 9-6.

Correction: An earlier version of this article incorrectly the numbers of each vote. The article has since been updated.