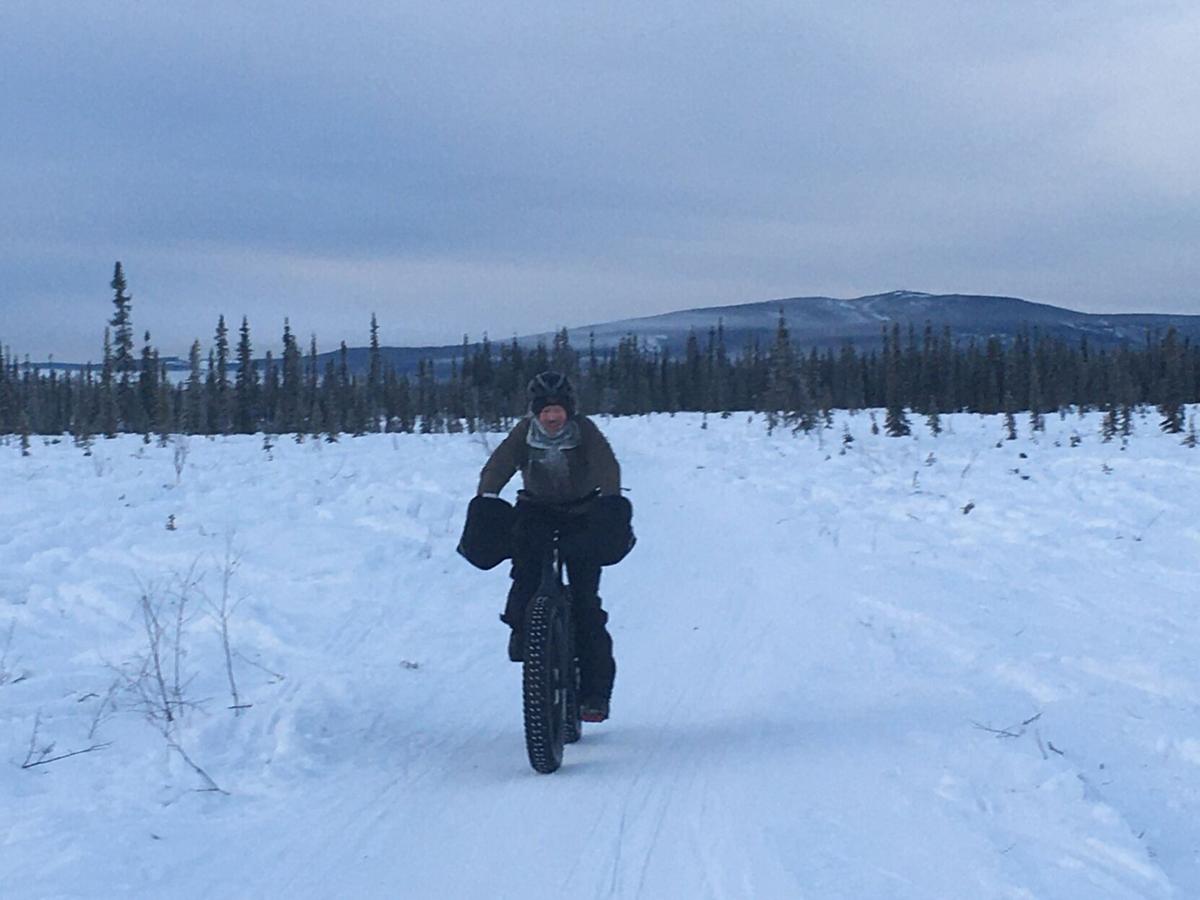 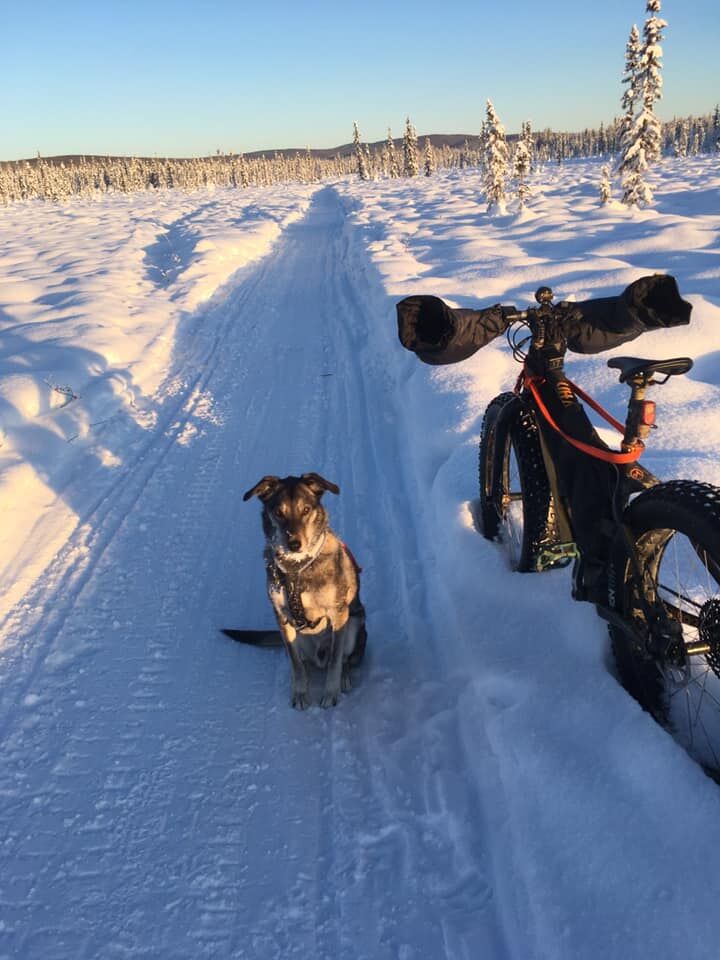 David James and his dog, Loki, in the Goldstream Public Use Area. David James photo 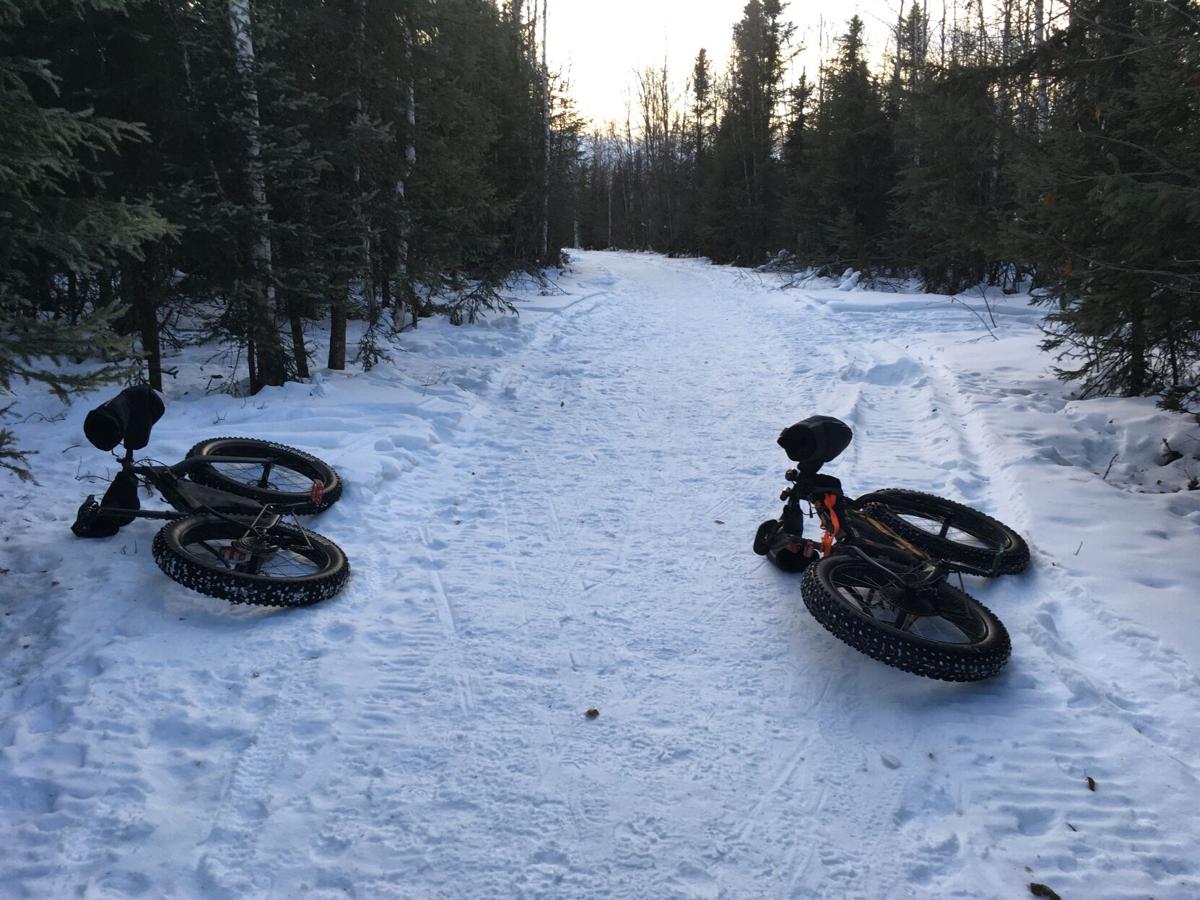 David James and his dog, Loki, in the Goldstream Public Use Area. David James photo

In summer, the O’Connor Creek East Ridge Trail is one of the more challenging mountain biking descents in the Fairbanks area.

A narrow and winding path dropping down from Old Murphy Dome Road to the neighborhoods above the Vallata on Goldstream Road, the route includes several miles of trail complicated in summer by tree roots, ruts, spongy ground, standing water, and other obstacles that impede downhill progress. The late Fairbanks cycling legend Rocky Reifenstuhl long ago dubbed it Spanky’s in honor of the severe beating the trail subjects riders to, and the nickname stuck.

But it wasn’t summer when I headed down Spanky’s with my friend, local author Rob McCue. It was January, and the trail was packed hard and smooth from a winter of heavy traffic. Where summer brings an array of inhibiting ground conditions that can send bikes scampering sideways, this was more like riding downhill on a sidewalk. There was no getting spanked. It was almost too easy, and twice as fast as a summer descent over the same route.

This is how it’s been all winter for fat bikers in Fairbanks. The shortage of snow that has disappointed skiers and others craving fresh powder has resulted in trails that are rock solid, fast, and fun for those of us on two wheels. And apart from a couple of brief dips, temperatures have been ideal as well. For cyclists, it’s been the best season in memory.

My winter riding memory stretches back to the late ‘90s when I first took to the trails on a mountain bike, inspired by friends who insisted there was no reason to quit when the snow flew. At the time, local bicycle guru Simon Rakower was selling Snow Cat rims that were twice the width of a standard mountain bike rim. Riders would mount mud tires onto them and head into the hills once snowmachine and dogsled traffic had sufficiently packed the trails. The wider footprint allowed by Snow Cats offered improved traction over hard-packed frozen surfaces.

Snow Cats could still get bogged down in fresh snow, however, so winter cycling remained a subculture among local outdoors enthusiasts until the late aughts when fat bikes began flooding the market. Over the past decade there’s been an enormous shift in Goldstream Valley trail use. Where years ago cross country skiers would often be encountered and cyclists were rare, these days winter bikers seem to outnumber all other users combined.

It’s easy to understand why. The technology for fat bikes advanced rapidly, and tires manufactured specifically for wide rims plow through the snow far better than the mud tires we used to deploy, while also rolling easily over packed surfaces. Winter cycling has gone from being a fun but frequently challenging endeavor to being fun and accessible to anyone.

Especially this year. This past weekend’s minor snowfall notwithstanding, the trails around the Tanana Valley have been consistently clear and smooth, with little rolling resistance. For anyone who’s contemplated giving the sport a shot, now is the time.

Rob was one of those people. A strong rider in summer and an accomplished outdoors traveler during any season, he had scheduled a rental for a Saturday and emailed suggesting we take a spin. He has the stamina for a decent loop with plenty of miles and a healthy climb. So we headed out across the Goldstream Public Use Area trails, which are flat and have been in pristine riding condition all winter, then ascended the El Dorado Trail and up a shortcut through a beautiful birch grove to the entrance to Spanky’s.

It was smooth going the entire distance, which has been the case everywhere I’ve ridden this winter. Our house is located near trails offering me multiple options, and despite having gotten out several times a week, the loop with Rob was the first time I repeated a route I’d already taken this year. Accompanied by the occasional friend, and always by my dog Loki (who’s also quite the bikejor pooch), I’ve pedaled hundreds of miles since the snow fell, and climbed tens of thousands feet. And it’s been remarkably easy.

The pandemic has certainly been a factor in getting me out the door and on the trails. With the usual winter social occasions on indefinite hold, the need to keep busy has been sated for many of us by the wealth of outdoor opportunities Alaska offers. We’re extremely fortunate in Fairbanks to have an abundance of trails even quite close to town and heading for the hinterlands in all directions. A lot of people are seizing the opportunity, and that additional traffic has only packed the trails all the more. Even routes that usually see minimal use in winter have been busted in by cyclists and others and are wide open this year.

This winter I’ve gone on numerous nighttime rides across Goldstream and into the lower hills, while weekends bring longer excursions up and over Ester Dome, Moose Mountain, and beyond. During most winters, riding at least part of those loops would be hampered by recent snowfall and soft trail bases from insufficient traffic. But not this year. And Spanky’s, which I used to think of as a summer trail, has become one of my favorite drops.

After a fast ride down Spanky’s, Rob and I picked up a minor side trail that took us down to O’Connor Creek. A semi-technical single track mostly used by walkers, it’s not generally an option for bikes. But this year it’s navigable, and with adroit steering we made it down. From there it was a fast flat haul across the Valley back to Goldstream Sports where a smiling Rob returned his rental. One more convert.

Winter cycling is always fun, but it’s rarely been as consistently awesome as it has this year. So if you’ve been bemoaning the lack of snow to ski on, buy or rent a fat bike instead, find a trailhead, and go. There’s never been a better winter to try it.

Fat bikes can be purchased from all the local outdoors shops, and Beaver Sports and Goldstream Sports both have rentals available for anywhere from a few hours to a week. Both shops have trails leading away from them, which can get people out the door and going immediately. For new riders I suggest beginning with the Goldstream Public Use Area trails. These are flat and well traveled, and the two primary routes are linked by several cross trails, making it easy to take shorter or longer loops. They also connect to trails heading into the hills. Access is from the pullout on the north side of Ballaine Hill.