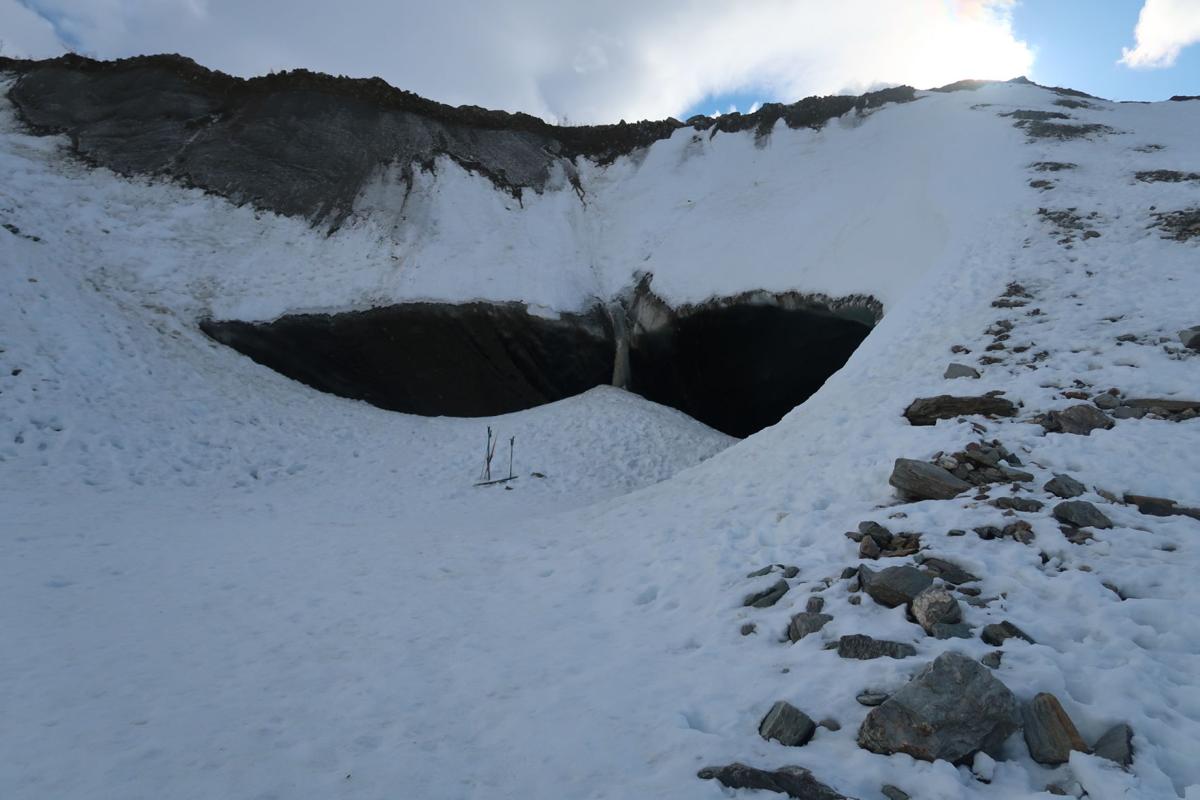 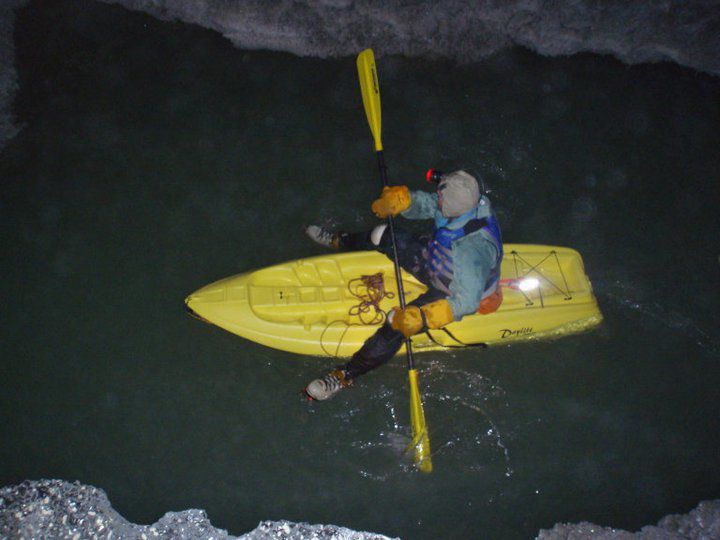 Dick Flaharty paddles a kayak in an ice cave in the Castner Glacier in 2010. 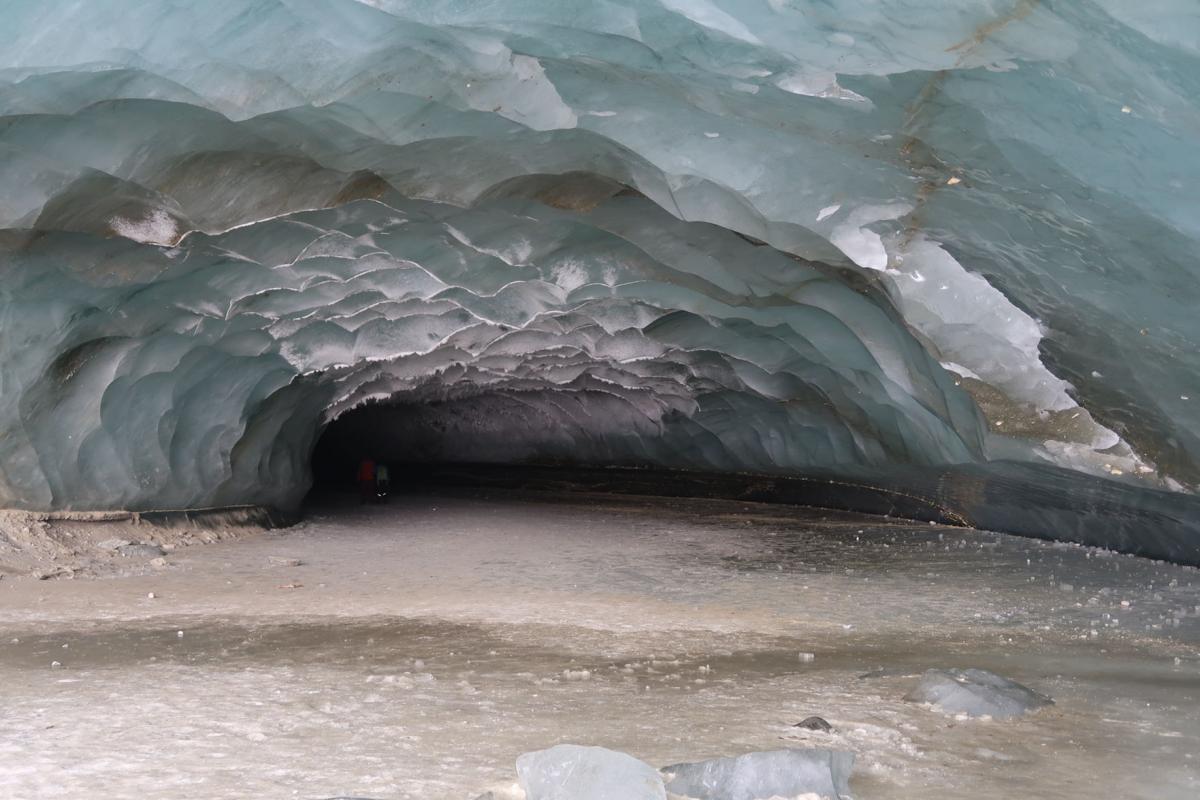 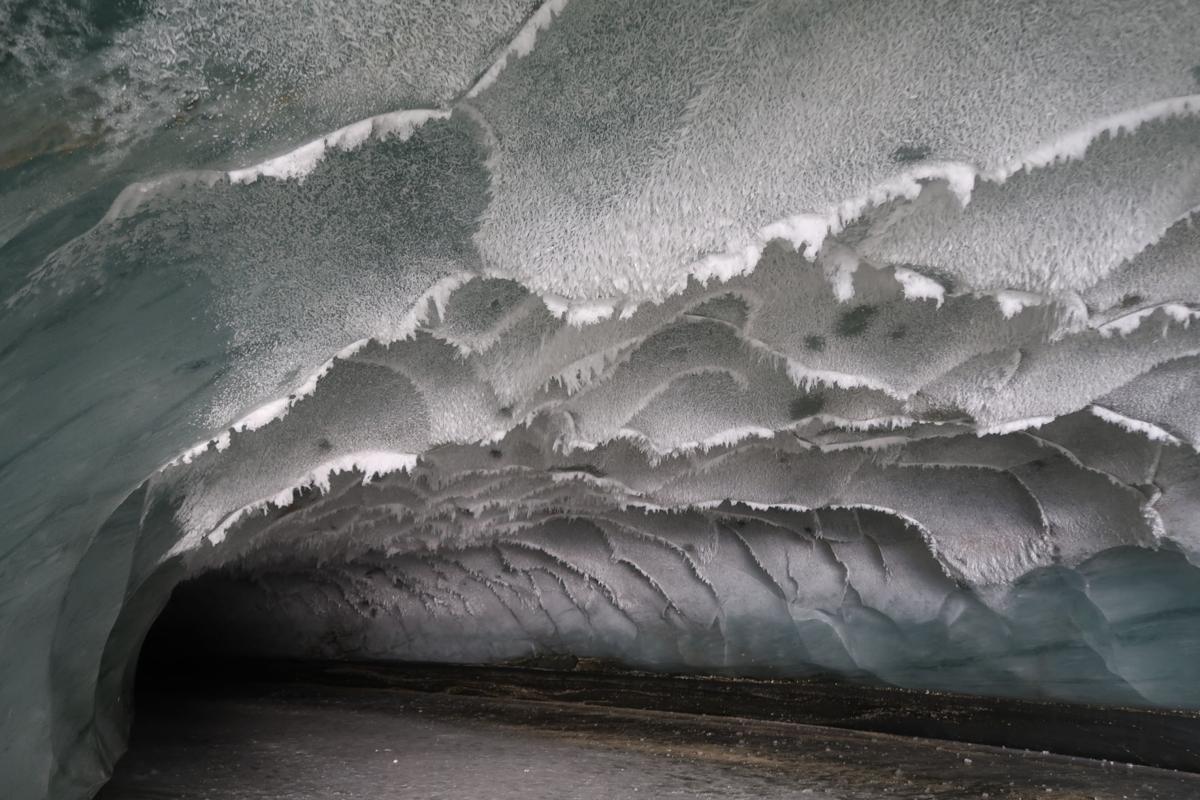 Dick Flaharty paddles a kayak in an ice cave in the Castner Glacier in 2010.

FAIRBANKS — It isn’t the cascading ramp of ice that draws most people to see one of the glaciers that’s most accessible from Fairbanks.

At the Castner Glacier, the active flowing part of the glacier retreated miles away from the Richardson Highway decades ago, leaving behind stagnant pieces of rock and ice.

Most visitors don’t venture much past the wall that marks the bottom of the terminal moraine. It looks more like a pile of tailings than a picture postcard glacier. For these visitors, the appeal of the Castner lies below the surface, where ice caves often form. These features change year to year and season to season with the movement of ice and meltwater. The ice caves are a popular day hike destination, and have been used as a wedding venue. For some especially daring adventurers, openings near the surface are merely entryways into an extensive network of under-ice chambers.

This year there’s a cave with a 12-foot-tall basketball-court-sized opening at the base of the terminal moraine. It features bright blue walls and a ceiling of glittering ice crystals.

Chris Larsen, a research professor at the University of Alaska Fairbanks’ Geophysical Institute studies glaciers, but not the Castner. His interest in the Castner is purely recreational — exploring the ice caves.

Larsen describes Castner Glacier as a relatively small glacier. Like most glaciers in Alaska, it’s been retreating since the end of the Little Ice Age, around 1900. The glacier runs down a relatively low-incline valley, which likely enhances the formation of the ice caves at the terminus, he said.

“On a steep glacier — that’s steep all the way to the terminus — the part that’s left behind as it retreats might just fall down,” Larsen said. “That’s probably more what’s going on with Exit Glacier in the Kenai. On this one (the Castner), the valley isn’t very steep where it ends so it gently leaves behind the ice.”

Ice caves can form in all kinds of glaciers. Another reason the Castner and the nearby Canwell glaciers are sought after by amateur glaciospeleologists is the easy access. The terminal moraine of the Castner Glacier is one mile from the Richardson south of Delta Junction. Meltwater from the glacier forms Castner Creek, which flows under the Richardson Highway near 217 Mile. Despite the popularity of the site, there’s no highway sign for it, and only limited parking on a highway pulloff near the creek.

There are some fairly obvious hazards of crawling around in caverns made of frozen water. For people who venture deep into the caves, the dangers include getting trapped in tight places, cut off from the outside world by collapsing walls, falling into freezing pools and asphyxiating in deep cave chambers where there is limited oxygen.

Dick Flaharty, the Fairbanks mountaineer who founded arctic clothing store Apocalypse Design, loves the Castner ice caves and has probably spent more time there than anyone alive. He estimates he went to the caves about 15 times a year between the 1980s and 2014.

On his farthest trips, he’s traveled as far as a mile under the ice, carrying a book of matches to light periodically in order to test if there is enough oxygen for fire, and thus to breathe, he said. He’s hauled out garbage bags full of Ice Age animal bones he’s taken to the University of Alaska Fairbanks. He’s also brought a kayak into the caves in order to reach farther across sections of open water.

Flaharty hasn’t heard of anyone being killed on ice cave tries, but there are plenty of close call stories.

About eight years ago, Flaharty and his wife, Sarah McGowan, walked into a passage with sections of thin ice along the floor.

“On the way out I made one wrong step and plunged in deep,” he said in a Facebook message. “Sarah couldn’t reach me so I just swam and swung my ice ax till I could climb out.”

Another time, Flaharty broke several ribs in the caves and had to be hauled out by his friends.

Larsen also has a close call story. His relates to the lack of oxygen.

“We went in pretty far, a full day of exploring. Towards the upper reaches we got into an area that had bad air. We all started acting a little silly, to the point where we were unable to realize we were incapacitated,” he said. “We all said, ‘I feel funny,’ ‘Yeah, I feel really strange too. Let’s keep going.’”

They pushed on, only turning around because the path ahead got too narrow. It was only after they returned to an area with better ventilation that they realized what had been happening.

Sliding around deep in the caves isn’t for everyone, but the area near the front of caves have wide appeal. John Schauer, a friend of Flaharty who has gone on some of his deeper exploration trip with him, has also visited the Castner ice caves with high school students.

Schauer used to teach science at North Pole High School and would take students on three-day field trips into the mountains.

“Ice caves were always a highlight,” he said.

Schauer said he doubts schools today would allow the risk of taking students into ice caves, but said he felt comfortable with it because he took his own children into the ice caves.

Schauer said the main hazard he tried to watch was the lip of the cave entrance, where large boulders can fall from above. He makes a point of not lingering in this area. The ice usually looks pretty stable in entrance areas of the ice caves they explored, but that can change quickly, Schauer said. The Castner Glacier is near the Denali Fault, which produced a magnitude 7.9 earthquake in 2002.

North Pole couple Susan Johnson and her boyfriend Roscoe Archer went to check out the ice caves last weekend, after hearing about them from the Fairbanks Hiking Club. The couple recently started a Facebook page and YouTube channel, “Archer’s Outdoor Adventure” to document their travels in Alaska and celebrate Archer’s upcoming retirement after 24 years in the Army.

As of last weekend, the trail over the frozen creek was still holding up, despite the warm weather, Johnson said.

“It was a very easy walk, and a nice day,” she said. “It took us about 30 minutes to walk back there. It’s all packed down from people walking on it.”

There were about two dozen people out on the trail to the caves, including people with children and carrying babies.

“I’ve never seen anything like that,” she said. “The colors and the ice and ice crystals. It was absolutely spectacular.”

This story has been changed to reflect the following correction: