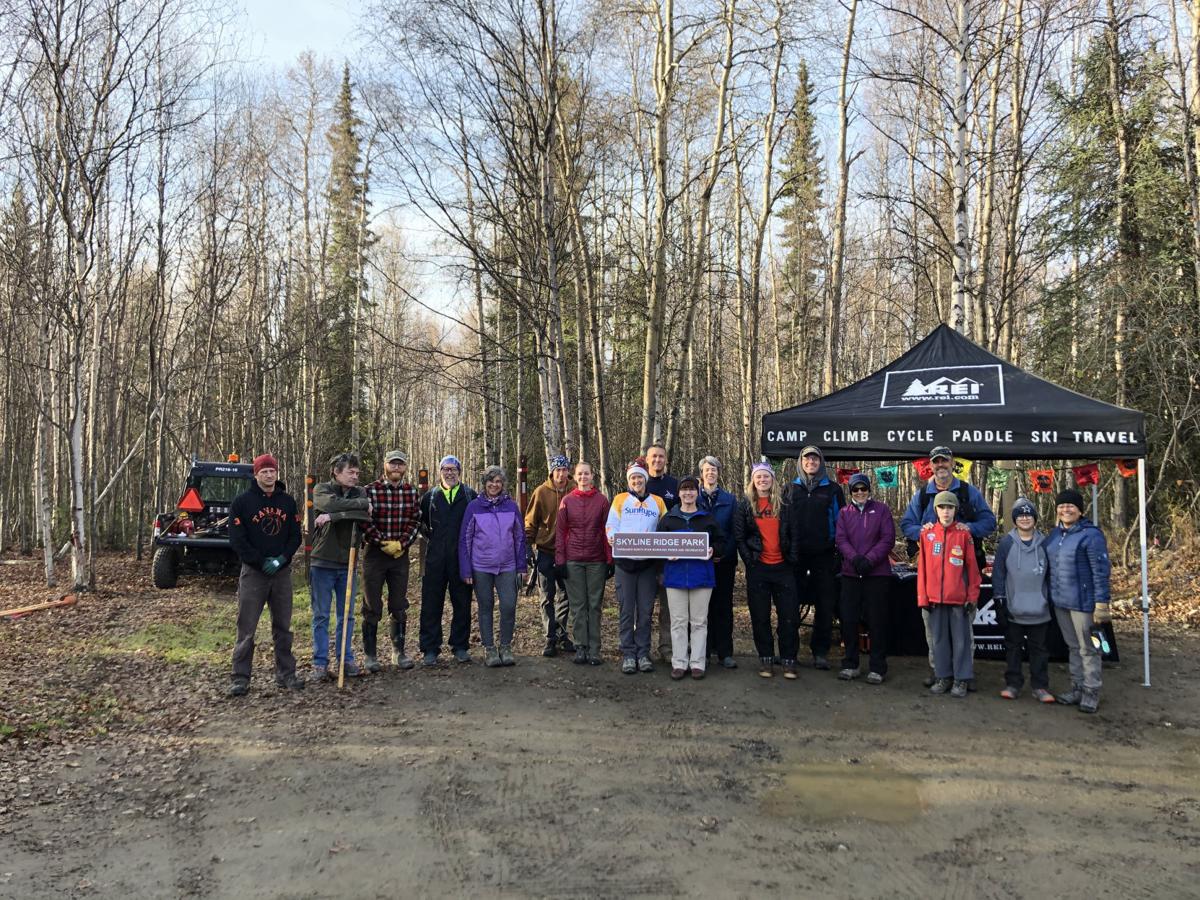 Volunteers working on the Skyline Trail on Sept. 28, which was National Public Lands Day, pose for a photograph. Work on the Skyline Ridge park was the first major project that AITPF conducted since it was formed in 2018. 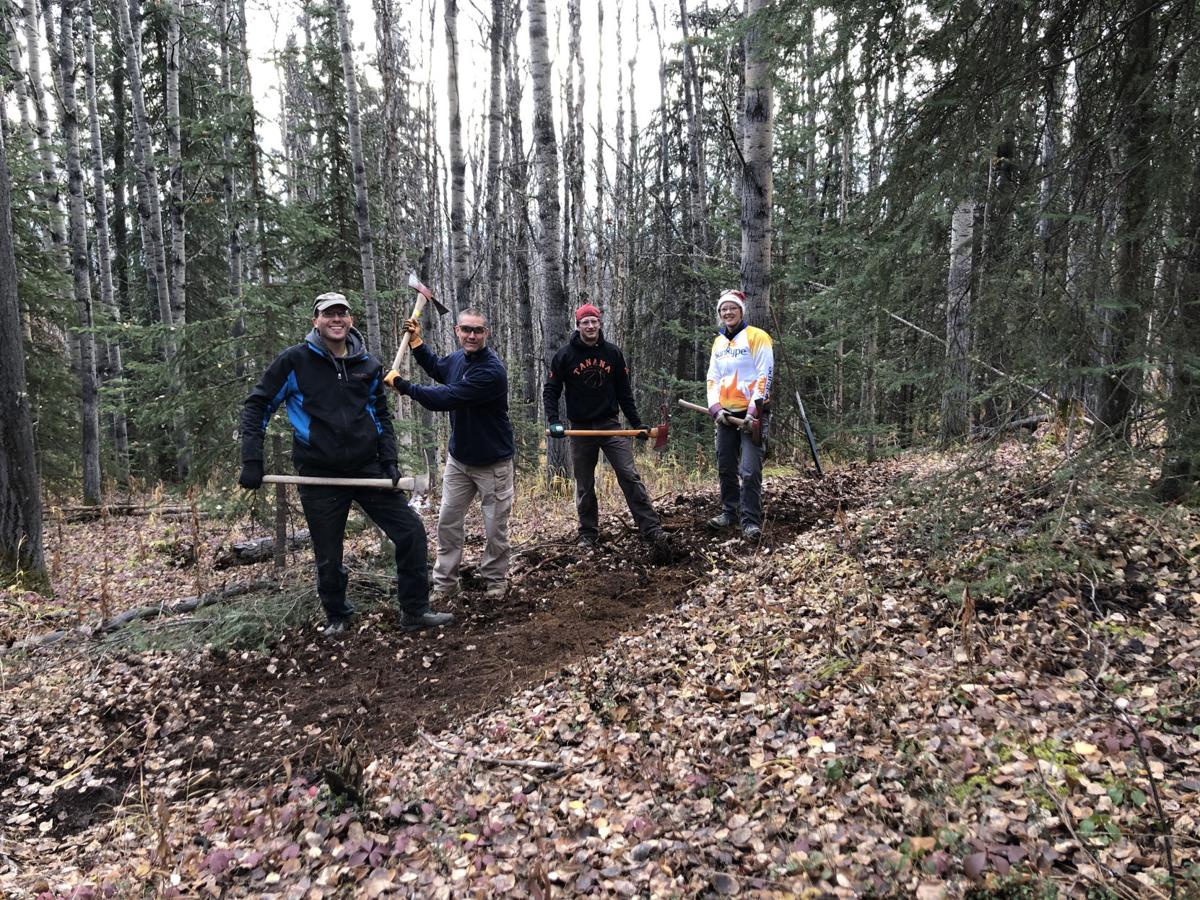 Volunteers with the Interior Alaska Trails and Parks Foundation wield tools as they work on one of the trails at the Skyline Ridge park on Sept. 28, 2019.

Volunteers working on the Skyline Trail on Sept. 28, which was National Public Lands Day, pose for a photograph. Work on the Skyline Ridge park was the first major project that AITPF conducted since it was formed in 2018.

Volunteers with the Interior Alaska Trails and Parks Foundation wield tools as they work on one of the trails at the Skyline Ridge park on Sept. 28, 2019.

If you’ve been to Fairbanks North Star Borough’s Skyline Ridge park recently, you may have noticed it’s been spruced up. The work was organized by one of Fairbanks’ newest outdoors-focused nonprofits, the Interior Alaska Trails and Parks Foundation, an organization that aims to unite all parks and trails enthusiasts, regardless of their usage.

“The reality is, the more you talk to people, the more you understand how much work there is to be done,” said John Junke, one of the group’s founders and its current board president.

Originally from Washington State, Junke moved to Fairbanks in 2014. His interest in trails is both personal and professional. He’s worked in a number of REI stores across the country over the past 14 years and he opened Fairbanks REI, where he works as store manager.

“In every stage in my career, I’ve been involved in advocacy for trails,” Junke said. “I’ve built trails on Mt. Rainier, I’ve built trails around Duthie Hill Mountain Bike Park, which is on the eastside of Seattle; I’ve worked on trash pick-up on beaches in Boston. I mean, my business is trails, but I also love to be outdoors.”

Junke was one of a handful of locals who came together to form the Interior Alaska Trails and Parks Foundation in fall 2018. An impetus for Junke was his awareness of just how much funding is available for trail projects, which is mainly because of his work.

REI gave around $8.5 million to trails organizations and nonprofits across the country in 2018. The Fairbanks REI has given roughly $150,000 to local groups since it opened in 2014 — recipients include Nordic Ski Club, Inspiring Girls Expeditions, Interior Alaska Land Trust and others.

“One of the challenges is that those grants and that money have to be dedicated specifically to trails,” Junke said. “And there wasn’t an organization in Fairbanks that was dedicated to that pursuit. Although, we do have a lot of amazing nonprofits in town.”

As an example, Junke noted that in 2019 REI granted money to the White Mountains 100 race. While the grants aren’t typically given to races, the organizers groom hundreds of miles of trails in the White Mountains. Situations like this led Junke to posit that Fairbanks was missing a nonprofit that focuses purely trails, but with a scope that includes all trail user groups. As a store manager, he was looking for organizations which could use the money; as a citizen he was looking for ways to get involved in trail stewardship.

“There are these groups that do amazing work, but they’re all very specific,” he said. “The other part of it is that so many of these trails that we love cross jurisdictional lines, depending on which agency is managing that land. It made things complicated, but that doesn’t mean that we shouldn’t advocate for it — that just means that we need a group that is willing to talk to all the stakeholders and bring them all together. And that’s the vision that I shared when we had that first meeting three years ago.”

According to Junke, roughly 50 people turned up to their first meeting in 2017. By the time the group became a 501C3 nonprofit in 2018, numbers had dwindled to essentially just the current board members, which Junke emphasizes is made up of representatives from almost every type of trail user group. IATPF’s limited membership, however, isn’t a restraint. The foundation is more interested in being a conduit for funding and advocacy that benefits all the various outdoors groups in town.

“We need something to connect all these different groups and, if nothing else, act as a hub of communication,” he said. “All these groups, they’re very symbiotic — particularly in the winter. The mushers need snowmachiners, the fat-bikers need snowmachiners. Nobody wants to break trail all the time.”

The Interior Alaska Trails and Parks Foundation raised a considerable amount of money during its first year — roughly $45,000. Thus far, it has received donations of $12,000 and $5,000 from anonymous locals. After Kinross Fort Knox’s mining operations forced the organization to reroute some trails, the company gave IATPF $20,000 in exchange for maintenance of a system of trails north of Gilmore Trail road, which connect to trails in the Cleary Summit area.

“We heard from stakeholders that trails are an important way of life for many reasons,” Anna Atchison, Fort Knox external affairs manager, told the News-Miner in July 2019. “Therefore, we felt compelled to invest in the long-term robustness of trail systems in Fairbanks and partnering with the newly founded Interior Alaska Trails and Parks Foundation made perfect sense.”

The foundation also received $7,000 from REI as part of the firm’s “Loving Our Local Outdoors” campaign. This grant was used to conduct the foundation’s first major project.

The REI grant allowed the foundation to help the Fairbanks North Star Borough Parks and Recreation Department in upgrading the trails at Skyline Ridge Park. On Sept. 28, a crowd of volunteers — some of whom were passers-by, who stopped to help out when they saw what was happening — gathered at the park. Junke explained there were three goals, the first of which was to install signage.

“The reality is: that park butts up against a lot of private land. The trails historically have crossed some of that land and they’ve been rerouted now, but people don’t really know,” Junke said. “Then there’s some actual maintenance on the trails that needs to happen, some erosion control. We want to get some gravel in there. It’s really never ending, but we got a recent chunk of that done.”

The third part of the project was a little too complicated to complete over just one day.

“The other chunk of work that needs to be done — that we’re talking to the borough about right now — is relocating the trailhead. It’s basically just pushing it back and putting in some parking lot area right there. If you’ve been up there, you know that you can get maybe three cars in there,” Junke said. “The challenging thing here is there’s such a small window to get work done on trails.”

That part of the project is due to be completed this year, once the weather becomes friendlier for trail work. And that’s not all the foundation has planned for this year. According to Junke, IATPF is currently looking at ways to support trail-work in the Rosie Creek area. The foundation’s board is also discussing the possibility of purchasing its own equipment — it currently has to borrow tools when trail work is conducted.

“So that when we hear, such-and-such a trail needs some love — there’s an issue, there’s a downed tree, whatever — we can respond to that,” he said. “Then we need to get our own insurance writer as well. People are swinging pulaskis and mcleods, you’ve got to get trained on that, but you also need to ensure that nobody gets hurt and that the organization can cover that.”

And, of course, there’s the constant pursuit of funds.

“One of the things that I didn’t really understand is how expensive it is to build and maintain trails,” Junke said. “It’s like $30,000 a mile. And we have a ton of trails.”

Perhaps most importantly, Junke said, the foundation is eager to connect with more organizations in town.

“The point is: if folks belong to these organizations or they have a trail or work that needs to be done, do not hesitate to reach out to us,” he said. “That doesn’t necessarily mean we’re going to have resources to put towards it, but having it on the radar is really important. The more voices that we have advocating for our trails, the better.

Correction: An earlier version of this article misstated the amount in grants that the Fairbanks REI has given to local non-profits since it opened. It has since been updated.