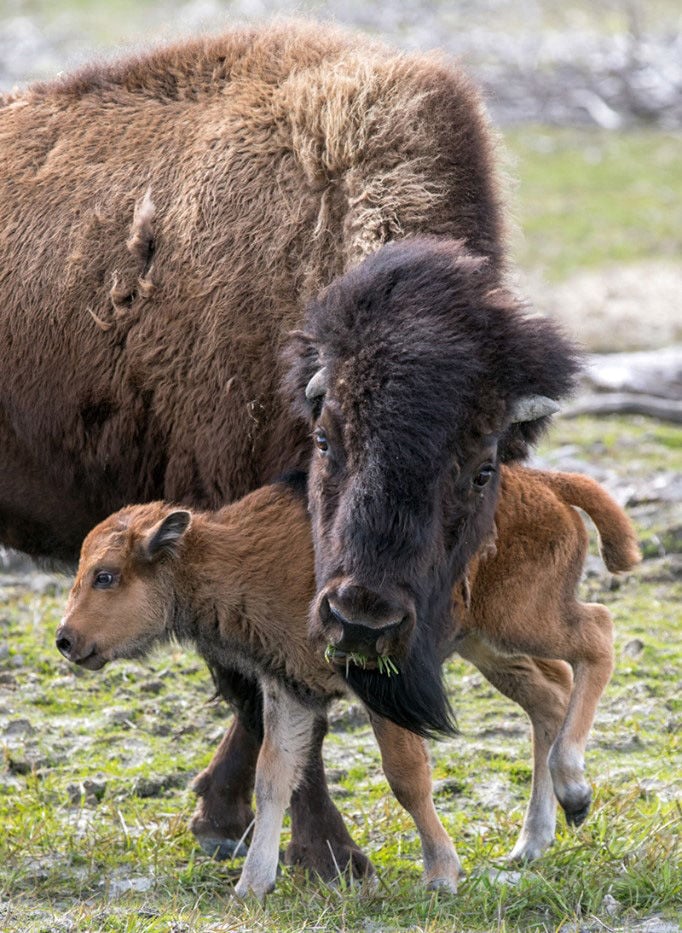 A wood bison cow leans over a calf. The tan/orange color of the calf stands out from the dark brown of the adult. 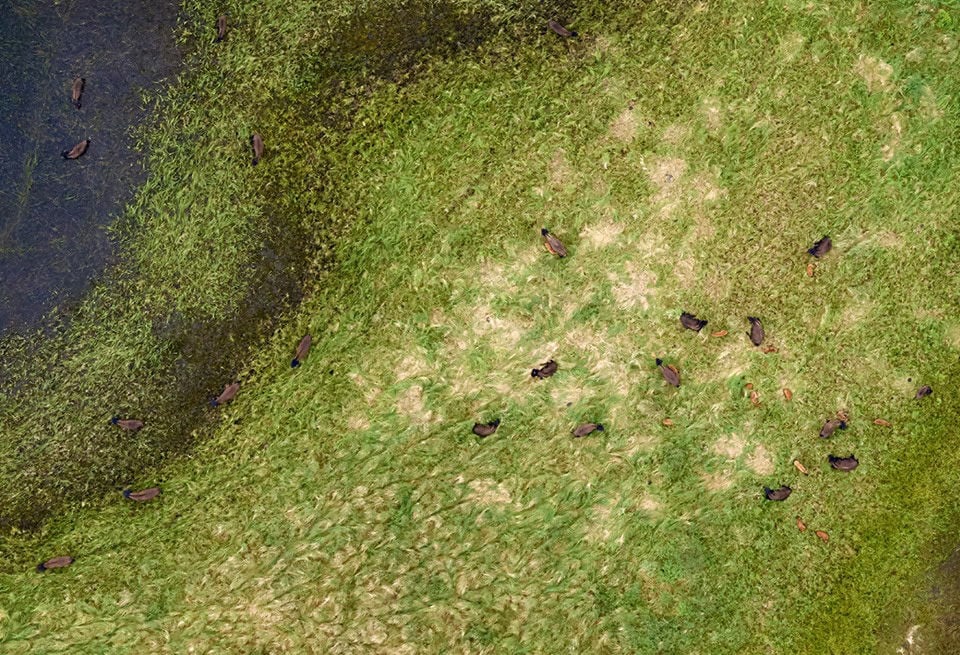 An image taken during the photo-census using one of the 100 megapixel cameras mounted to the bottom of the department’s Beaver. One of the many advantages of the photo-survey method is that the direct overhead view makes it much easier to spot calves in vegetation.

A wood bison cow leans over a calf. The tan/orange color of the calf stands out from the dark brown of the adult.

An image taken during the photo-census using one of the 100 megapixel cameras mounted to the bottom of the department’s Beaver. One of the many advantages of the photo-survey method is that the direct overhead view makes it much easier to spot calves in vegetation.

A wood bison herd that was introduced to Western Alaska in 2015 has bounced back after its population dipped in 2018. According to a July update from the Alaska Department of Fish and Game, 2019 has been a good year so far for the only wild wood bison herd in the United States, which saw its largest population increase since release.

Prior to 2015, wood bison were extinct in Alaska. However, oral histories and bone records indicate that large herds were present centuries ago, and a few even survived into the early 20th century. ADF&G reintroduced a herd of 130 bison four years ago to enhance grazing ecosystems, provide another large animal for people to hunt, and help the international effort to restore the sub-species from near extinction.

On June 21, a population estimate was completed for the herd, using aerial photography to count the radio-tracked bison. The results of the photo survey suggest that the population of the herd, which roams in the lower Innoko-Yukon rivers area, has rebounded from its low point in May 2018. In June of that year, it was estimated there were just 91 bison. A preliminary estimate of the current population is 113 bison, which includes 20 new calves born so far this year.

According to the department, the population decline in the spring of 2018 in the Innoko area was “significant” and resulted in the herd numbers dropping below the level they were at when the bison were released. In August 2018, the Fairbanks Daily News-Miner reported that this was caused by a hard winter and wolf predation. ADF&G said that a prolonged snowpack, which lasted over a month longer than usual into the spring, led to the deaths of many animals in the area.

While the herd is still smaller than it was at its peak in 2017 (140 bison), its population has increased proportionately more in 2019 than in any other year since the bison were released. Last winter, despite months of deep snow in Innoko (as much as 3 feet in February), there was very little natural mortality among the herd and the bison exhibited good body condition throughout the winter.

“This is evidence that the wood bison are learning from and adjusting to their environment, as the herd approaches five years in their wild surroundings,” ADF&G’s July update states. “With a bit of luck, the herd will continue to grow and flourish over the next several years. Stay tuned!”

“That means that they’re gaining more and more knowledge in finding the most nutritious food,” said Darren Bruning, a regional supervisor for ADF&G’s division of wildlife conservation based in Fairbanks. The bison, he said, are, “through their behavior and their own innate biology, adjusting to weather patterns and how those weather patterns will affect the landscape.”

Bruning said that this includes things like learning which are the safe areas for crossing ice or where the more productive foraging areas are.

“Each day that they’re out there, they learn more about the landscape they’re living on and how they can utilize that for their viability,” he said.

According to a model used for estimating future population size, ADF&G predicts that the herd’s population may hit 250 by the year 2025 and 1,000 by 2045. The herd’s management plan calls for allowing a small bison hunt when the herd reaches a population of about 250 animals, but Bruning said hopeful hunters shouldn’t count their chickens yet.

“A certain number of animals will not be the trigger for when some hunting is allowed,” he said, explaining that there will be a number of factors involved in determining whether a hunt is feasible. “That’ll be the time when we start taking a closer, more detailed assessment of the population to assess whether hunting could happen.”

Bruning said this assessment will involve ensuring that the population can sustain itself and maintain its productivity through a hunt.

ADF&G intends to hold some public planning meetings, beginning this winter, to discuss the potential release of new groups of bison. Details of these meetings are yet to be determined.