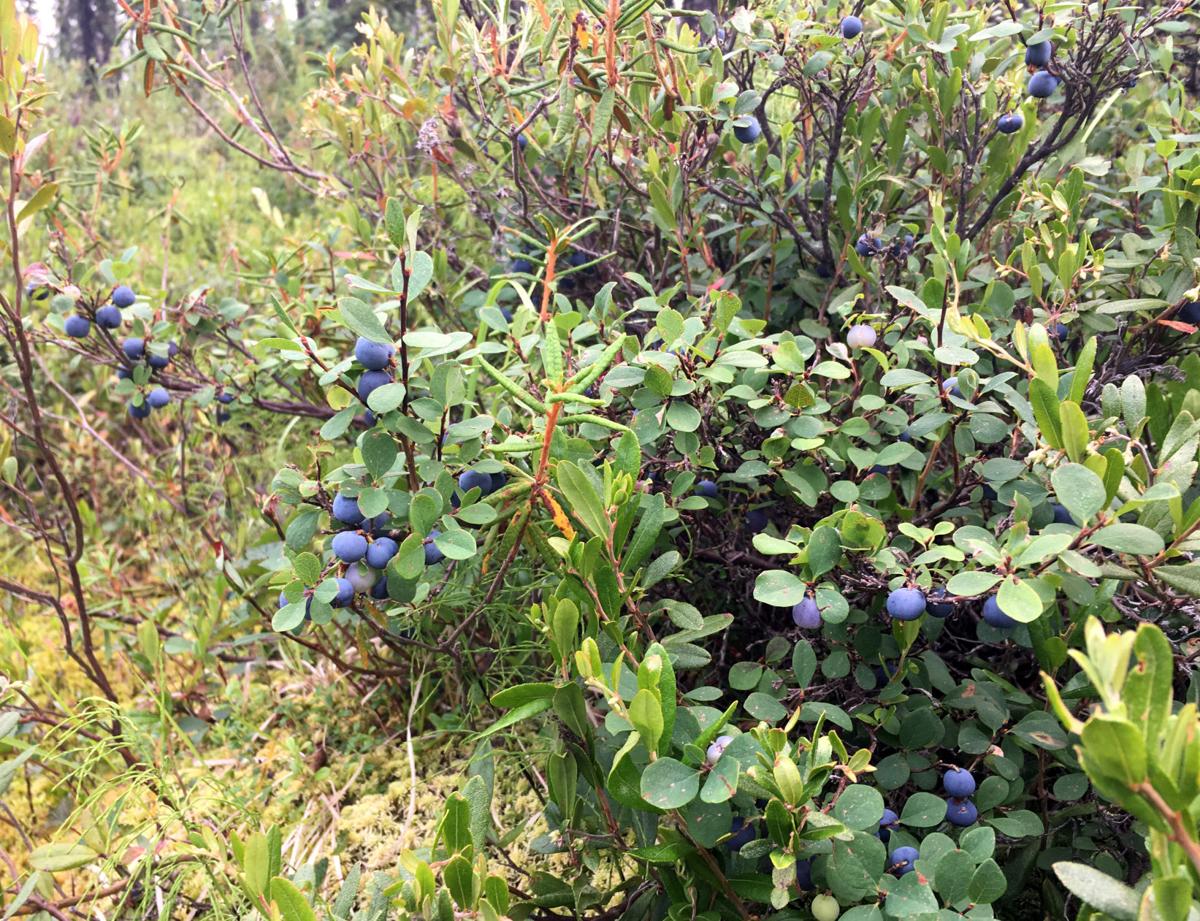 A abundance of blueberries on a bush is seen in Two Rivers in July. 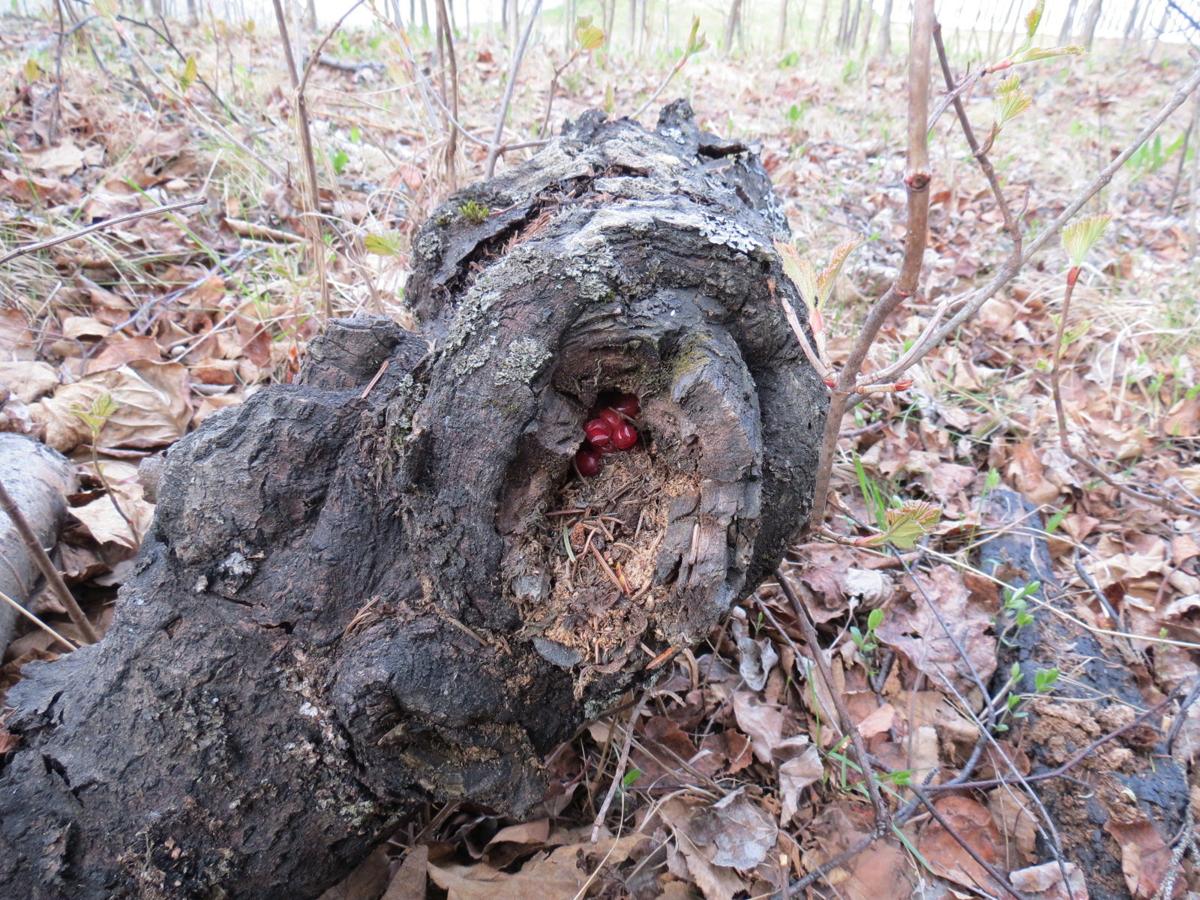 A vole stash of highbush cranberry is visible in the crook of a log.

A abundance of blueberries on a bush is seen in Two Rivers in July.

A vole stash of highbush cranberry is visible in the crook of a log.

As local berry enthusiasts are probably aware, the fall picking season began early this year. On the public Facebook group “Alaska berry pickers” various members from across the state were posting about the bucketloads they’d already harvested as far back as mid-July.

“I picked 5 cups of blueberries in 1 hr off the Steese Hwy. No green ones and already sweet. Who would have thought on July 20th ... earliest harvest of blueberries ever for me!!” wrote one member in a recent post.

Speaking with the Fairbanks Daily News-Miner on July 26, Northern Region Park Superintendent Brooks Ludwig said, “The berry picking is excellent now. Definitely coming in early and thick. Last year was a really poor berry year, so it’s nice to see all the berries this year.”

According to Christa Mulder, a professor of plant ecology with the University of Alaska Fairbanks’ Biology and Wildlife Department, earlier berry crops are becoming increasingly regular. If, however, you’re thinking you can simply schedule your berry-picking a little earlier in the season, you may be disappointed to learn that the situation is more complicated than that.

The research of Mulder and Katie Spellman, an assistant professor working at UAF’s International Arctic Research Center, focus on phenology — which, in short, refers to the timing of when plants do certain things, like release seeds or produce fruit. According to Mulder and Spellman, when it comes to berries, warmer temperatures are just one factor and observations point toward berry seasons across the state becoming increasingly unpredictable.

“People have expressed the observation that berries are less reliable than they were in the past,” Spellman added. “The current research really is a response to that observation.”

One of the research projects that Spellman and Mulder are currently conducting is entering its third year and has seen them enlist the help of over 1,000 volunteers across Alaska. Mulder said that these “citizen scientists” have each marked 20 plants with roughly 100 berries. Once a week the plants are monitored, in order to build a dataset that illustrates how abundant berries are and when they’re disappearing. The initial question is: How is seasonal change affecting the timing of berry production? Ultimately, however, the question will be: What does this mean for animals that rely on them?

While Mulder and Spellman don’t yet have enough data to conclusively answer those questions, there are some things that they are already pretty certain of. Mulder explained that berry phenology is heavily dependent on when the plants flower, which is mostly driven by when water becomes available for plants. A warmer-than-average spring means earlier snowmelt and, in turn, earlier flowers and earlier fruit production.

Using 100 years worth of herbarium records, Mulder found that this is happening with more frequency.

“What really has changed is that some years spring is coming extremely early,” she said. “An early year during the decade from 1930-40 was a lot less early than in the past decade; now we’re getting these extremely early years.”

But berries are more fickle than this. Spellman pointed out that fruit production depends on more than just the plant flowering; they also need to be pollinated. She noted that an early spring followed by periods of heavy rain presents poor conditions for pollinators and that could result in a poorer berry crop.

“And it can also matter what happens the year before. Blueberry and cranberry, for example, initiate their flowers in June of the year before they flower,” she continued. “We like to tell people that the birth of a berry is a miracle, because at every stage of the life-cycle, things can go haywire.”

While more data is required to find demonstrable patterns, Mulder and Spellman have come to some conclusions.

“What we do know is the patterns are very different in different areas,” Mulder said. “Say you’ve got highbush cranberry — in interior Alaska, they disappear really quickly. If you go to Southeast Alaska, they don’t go very quickly. At first we were like, what’s up with that? And then we realized they’ve got all these other berries that animals love even more.”

The portentous side of this analysis is the potential ecological effects of the variation. Mulder said that animals that are adept at storing food for long periods of time may be relatively unaffected; those that build smaller caches, like voles, may be put under greater stress. Eventually this may affect larger animals further up the food chain, like foxes — and possibly even people.

“We need to be prepared to cache — just like all the other animals that survive in Alaska,” Spellman said. “We need to preserve enough in the good years to prepare for years when there’s a crop failure.”

Spellman and Mulder said they occasionally give presentations to schoolchildren. Recently, as a classroom exercise, they’ve been offering up hypothetical in which fruit production and crop failures become harder to predict.

“It’s been really unique to see the things that students come up with on how to prepare for variable berry seasons,” Spellman said. “A lot of the students want to plant buffer crops.”

For example, Spellman said that a group of kids from Two Rivers Elementary planted honeyberries just outside the school. Other students, like those from John Fredson School in the village of Venetie, decided to practice making jams and preserves and distributed them among the town’s elders.

And it’s not just those who rely on subsistence gathering — hunting opportunities, too, stand to be affected. Mulder said that if berries aren’t available for the likes of ptarmigan and grouse, it could impact fall bird hunts.

It works the other way, too — human response to variable berry seasons could have an inverse effect on migrating birds, animals that hibernate and winter feeders, all of which rely on berries for survival.

“If the berries are out super early and there’s lots of time for people to collect them — like this year — what happens to the animals that depend on them for the winter? Things like voles and ptarmigan and grouse and foxes?” Mulder said.

“It’s not just us that benefit from these superfoods,” Spellman added.