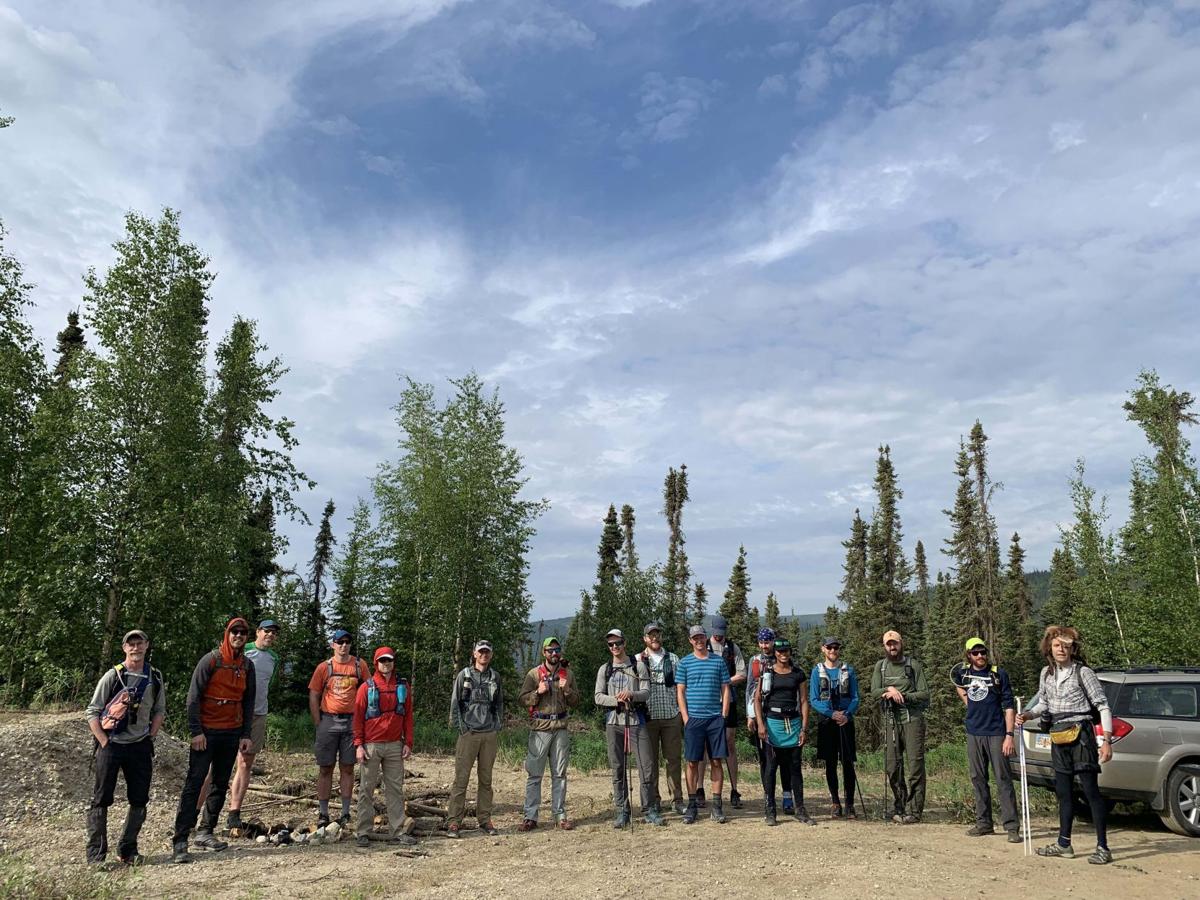 A photograph shows all the participants of this year's AlaskAcross standing in the Lost Creek area, just before the start of the event. Courtesy Mark Ross 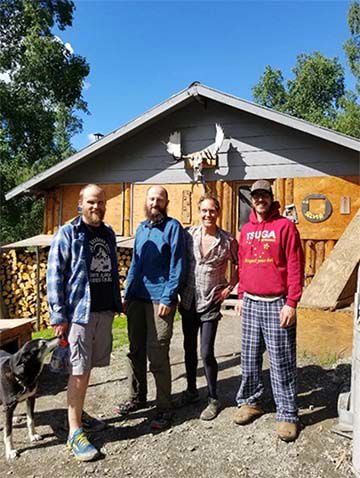 From left: Brandon, Mike, Mark Ross, and Brent Sass stand in front of Sass's homestead in Eureka, after completing AlaskAcross 2020. Visible in the photograph are Sass's giant soft slippers, which were necessary after the event "thrashed" his feet. Courtesy Mark Ross

A photograph shows all the participants of this year's AlaskAcross standing in the Lost Creek area, just before the start of the event. Courtesy Mark Ross

From left: Brandon, Mike, Mark Ross, and Brent Sass stand in front of Sass's homestead in Eureka, after completing AlaskAcross 2020. Visible in the photograph are Sass's giant soft slippers, which were necessary after the event "thrashed" his feet. Courtesy Mark Ross

While the coronavirus pandemic continues to define life in 2020, causing event cancellations and social disruptions, the folks behind one Fairbanks tradition decided to push on regardless. On June 9, a group of 18 people from across the state took part in AlaskAcross 20. The annual timed wilderness event sees teams or individuals hike/run their own chosen routes between two pre-established points over the course of between 20 and 40 hours.

Like last year, this year’s event began Lost Creek and roughly followed the Sawtooth Traverse over 65 miles to the finish line: a homestead in Eureka owned by Brent Sass. The quickest team were Brian Atkinson and Nick Janssen, who completed the route in 21 hours and 58 minutes. Hot on their heels were Bob Gillis and Brent Sass, who both hiked solo and finished with times of 22 hours 15 minutes and 22 hours 21 minutes, respectively.

Below is a list of all participants and their finish times. The event’s main promoter, Mark Ross, likes to call it “the aftermath,” rather than a leaderboard:

“We don’t use the word winner, we just say first arrival.,” Ross said, adding that this year was a good turnout. “We’ve had much lower and a little bit higher (participation). I think people were very eager to get out, because there had been so many cancellations of things.”

Ross said, for example, that Mike Fisher and Brandon Wood had come up from Anchorage to take part in the event — which is unusual for AlaskAcross, an event that typically attracts strictly locals.

According to Ross, Fisher and Wood had the longest planned route, and ended up getting “hammered by weather,” resulting in them being out in the wilderness for roughly 45 hours. Ross noted that weather is often one of the key obstacles and challenges for those heading through the Sawtooth Traverse.

“Up there, the main things to watch out for are lightning and bears,” he said. “That place is the birth of thunderstorms coming up off the Minto Lakes. This year pretty much everyone dodged it. I didn’t get hit with a thunderstorm until the final hour — the 29th hour.”

Brian Atkinson, one of the two members of the team with the quickest time this year, said that their success was largely due to Nick Jannsen’s suggestion that they take a low route, rather than going over the top of the Sawtooth Traverse.

“I ran it last year for the first time with Tracie Curry. She did it again this year, but had a different partner. So I reached out to Nick,” Atkinson said. “I think last year it took Tracie and I around 27 hours or maybe 28?”

He and Jannsen had already been training for the White Mountains 100, which was canceled. As such, both individuals felt they were in good enough shape for the event, so they sat down together for a couple of hours looking at maps of the area.

“Last year we went up along the high route, up along the ridge,” Atkinson said. “Nick is pretty good at reading maps, so after talking about it we decided to go down on the low route.”

Atkinson said that he initially felt anxious about the low route, which he figured would be far wetter and possibly more treacherous than the mountainous route.

“We actually made the decision at the junction,” Atkinson said. “And we saved a lot of time that way.”

Additionally, Atkinson said, having completed the event last year, he was familiar with the terrain — and both he and Jannsen had opted for very lightweight gear. In comparison, Atkinson said, it was astonishing to see both Bob Gillis and Brent Sass choosing to travel trickier terrain but managing to keep up their pace.

“We sort of teamed up with Bob Gillis and he finished right behind us,” Atkinson said. “Him and Brent Sass were kind of amazing going over the tundra. It’s amazing how quick they are.”

Atkinson gave Mark Ross a shoutout for organizing the event and said he’ll definitely take part again in the future.

“It’s just cool to see everyone come out,” he added.

Sass’ impressive performance may have been partly to do with a home-advantage. Mark Ross explained that the reason Sass’ home became the finish line dates back to the Yukon Quest 2019. Sass won the Quest both this year and last — and Ross said he was present at the finish line in 2019.

Sass has taken part in the event just twice: in its inaugural year in 2007, and this year. According to Ross, this year he was in the lead all the way, until just a few miles before the finish line. Sass said that finishing at his own home provided good motivation for him.

“That was awesome. That was the best part about it!” he said. “It was awesome to get back. I haven’t really pushed myself that way in a long time. And, you know, it was such a beautiful day.”

In an email, Sass wrote that he turned 40 this year and doesn’t specifically train for hikes or runs like AlaskAcross. While he’s constantly training with his sled dogs, the longest hike he did leading up to the event was 15 miles.

According to Sass, he almost immediately injured his shin climbing the first hill.

“Nothing that was going to stop me but I did deal with it the whole way,” he wrote.

Sass’ email conveys a doggedness, perhaps born of his mushing, that clearly pushed him along. For every mention of his “throbbing and swollen” shin, there’s a rhapsody on the weather or terrain. Sass noted in the email that he lives by his favorite quotation, which is also tattooed on his arm: “Pain is inevitable, suffering is optional.”

“By mile 20 I had some pretty bad blisters on both the pads of my feet but I was having the time of my life,” he wrote. “It’s a beautiful country and I was focused on that.”

Sass writes that, roughly 12 miles away from his home, he hit “what I consider my back yard and my trail system was not too far off the ridge.”

“Shortly after hitting the trail I heard someone calling out for bears not far behind me. Unfortunately at this point I had one speed, forward! I was surprised to hold them off for several miles when they did finally see me, they sprinted on past me and asked me to join,” Sass wrote. I told them this was all I had: see ya at the finish! Little did I know these guys were the leaders!”

Sass said his feet were “trashed” afterward, but his tone was never less than gleeful. Based on testimony from various other participants, this was a feeling shared by all those involved.