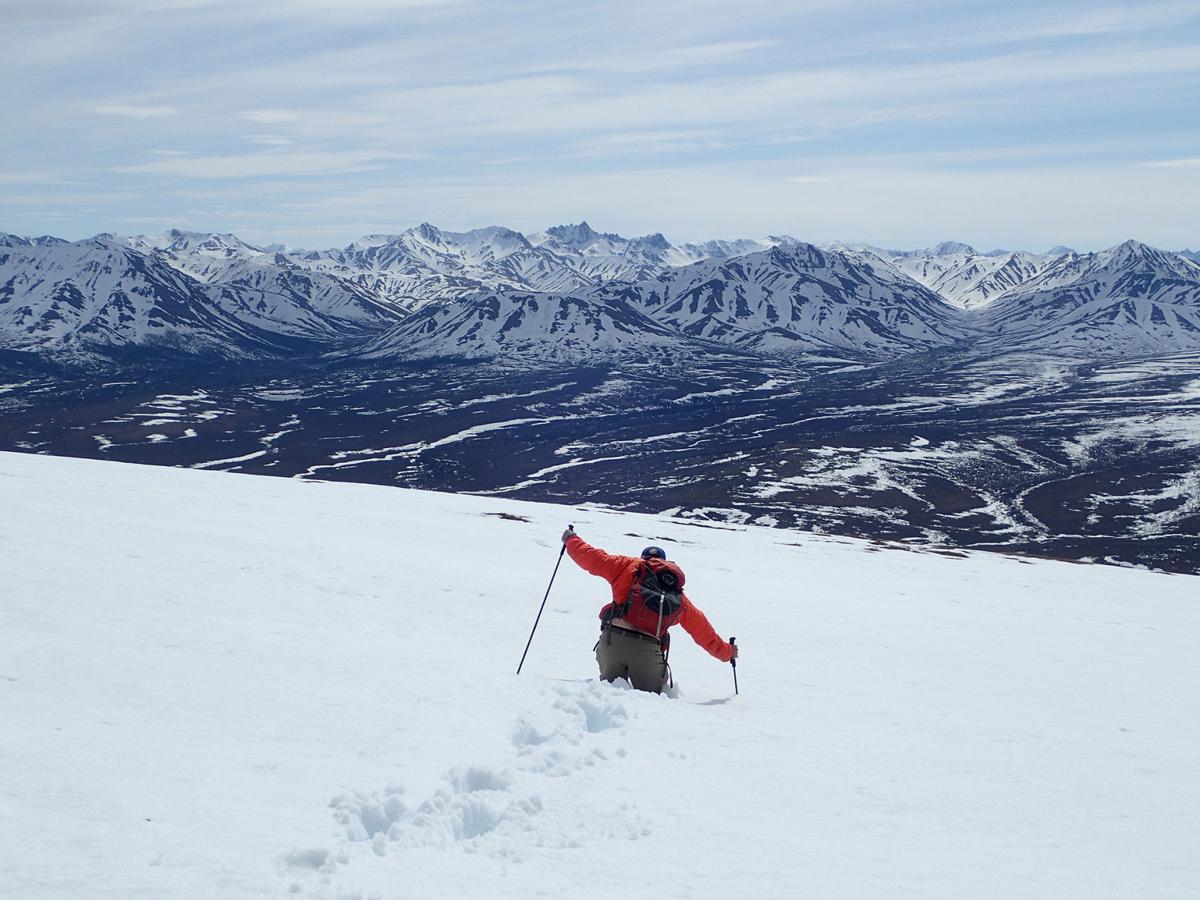 The author wallows though a snowfield while descending from the summit of Mount Margaret in Denali National Park and Preserve. 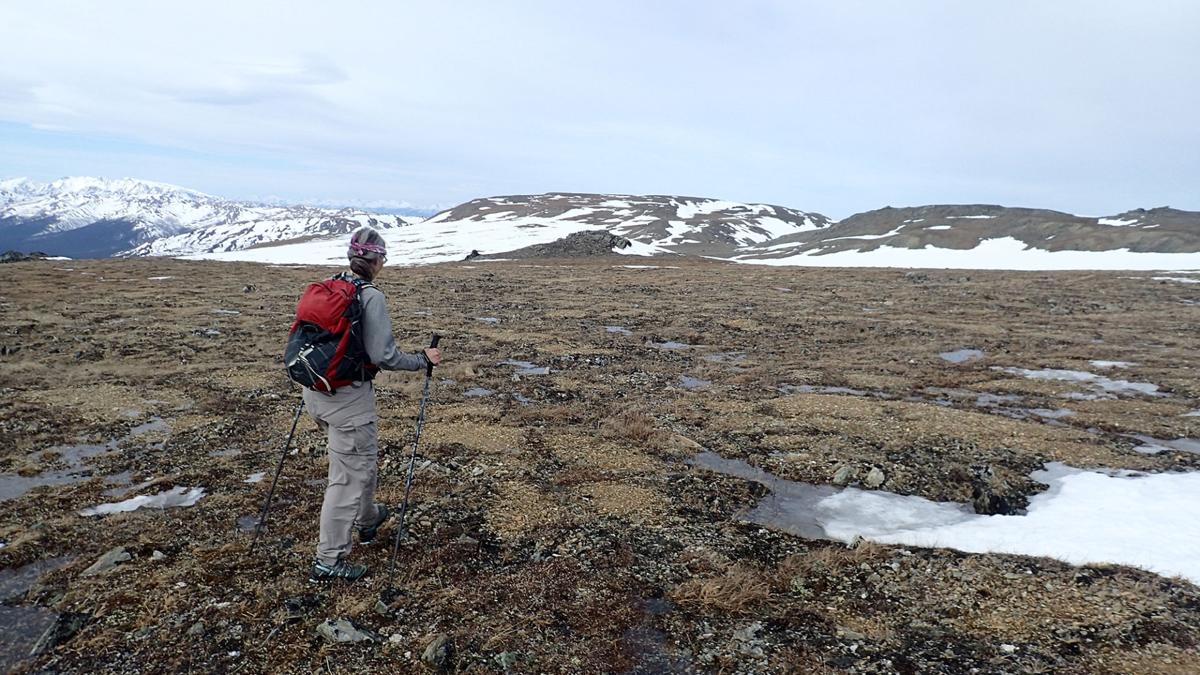 Corrine Leistikow picks her way around snow, ice, puddles and mud on a plateau near the top of Mount Margaret in Denali National Park and Preserve. 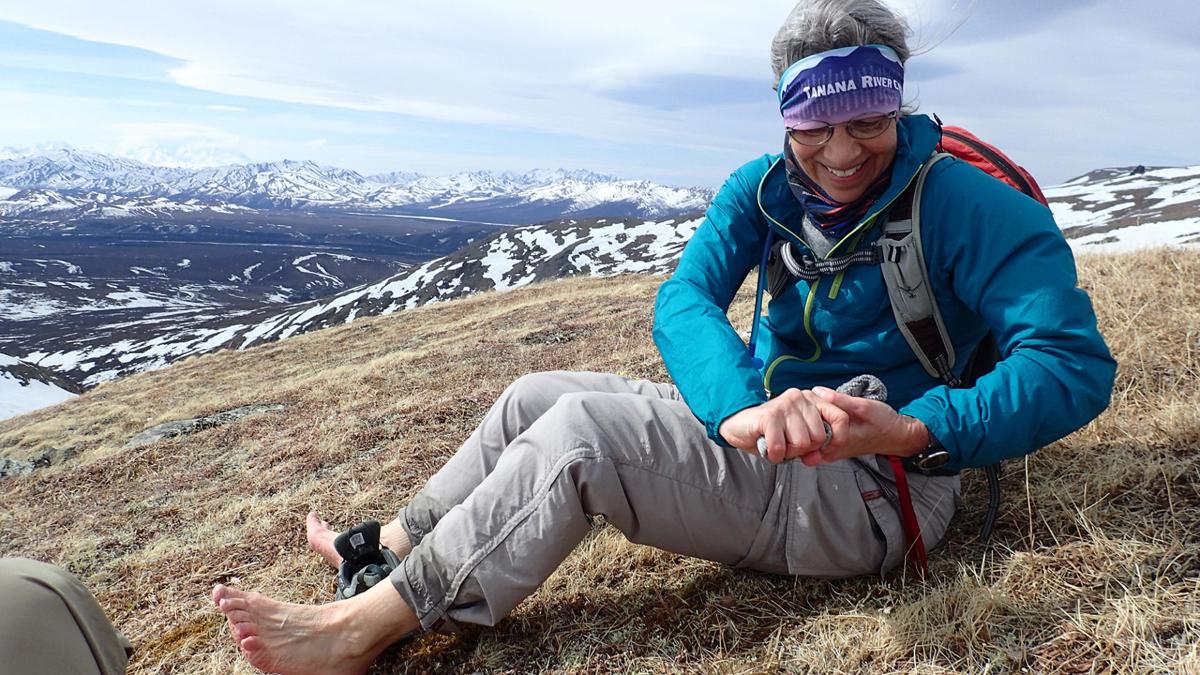 Corrine Leistikow takes a photo of mount Denali, partly obscured by clouds, while descending from a hike to the top of Mount Margaret in Denali National Park and Preserve. 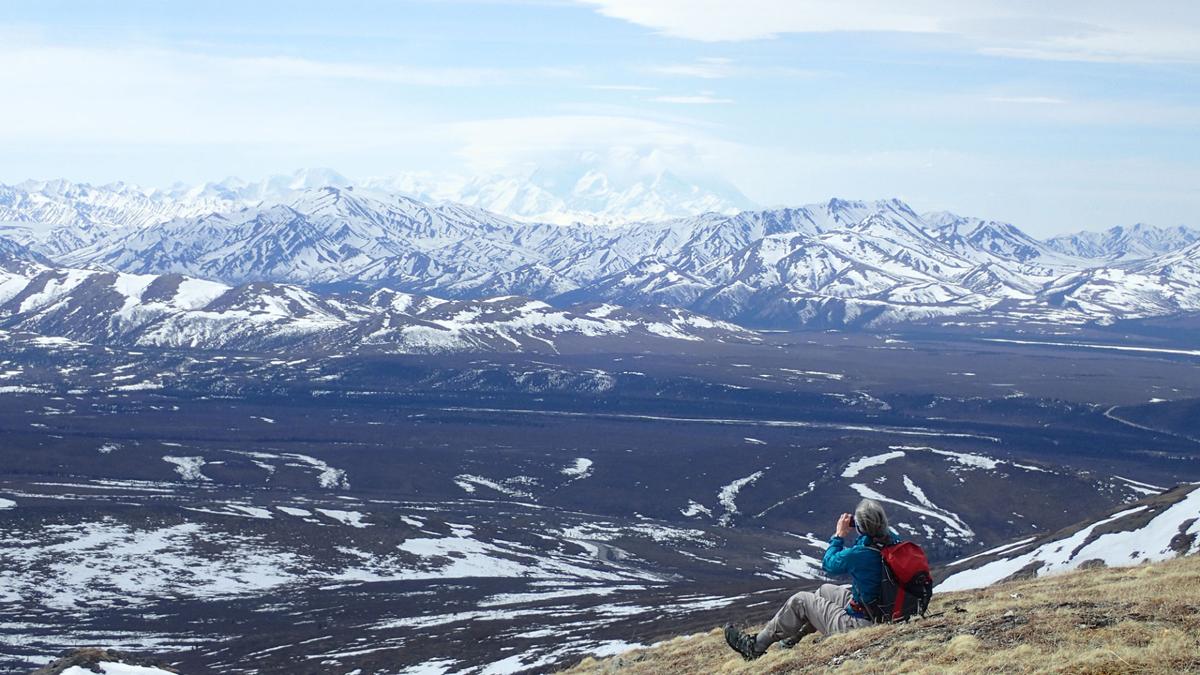 Corrine Leistikow wrings out a sock after a soggy slog through a melting snowfield just after descending off the summit of Mount Margaret in Denali National Park and Preserve. The top of Denali, partly obscured by clouds, can be seen in the upper left.

The author wallows though a snowfield while descending from the summit of Mount Margaret in Denali National Park and Preserve.

Corrine Leistikow picks her way around snow, ice, puddles and mud on a plateau near the top of Mount Margaret in Denali National Park and Preserve.

Corrine Leistikow takes a photo of mount Denali, partly obscured by clouds, while descending from a hike to the top of Mount Margaret in Denali National Park and Preserve.

Corrine Leistikow wrings out a sock after a soggy slog through a melting snowfield just after descending off the summit of Mount Margaret in Denali National Park and Preserve. The top of Denali, partly obscured by clouds, can be seen in the upper left.

Sometimes it’s good to try something on a whim. You might end up cold and with wet feet, but you’ll have a smile on your face.

For Mother’s Day, my wife Corrine had suggested hiking the Savage Alpine Trail in Denali National Park. We heard it was in pretty good shape, and neither of us had done that one in a while. It was a good plan.

We got an early start to beat the crowds that we heard had been collecting at Denali after the Park Road recently opened. We arrived around 9 a.m., and already several cars were on the road. But when we neared the easternmost trailhead of the Savage Alpine Trail we were greeted with a sign: “Trail Closed Due to Dangerous Wildlife Activity.” We had heard about a grizzly in the area a few days earlier, so we should have figured that might be a possibility.

We decided to check the trailhead at the Savage River parking lot, but that whole lot was closed. We kept driving and discussing, finally deciding to park at the Teklanika rest stop and walk along the river.

A couple of miles past Savage River, the road tops out and winds around the nose of a ridge. As we drove by I mentioned how I’ve often wanted to hike that ridge toward Mount Margaret. It’s above treeline and is a mostly gentle climb to the top. Corrine pointed to a large pullout and said, “We could park there.” After a moment I realized she was suggesting we give it a try. I hesitated. The ridge had a lot of snow patches. But driving all the way to Teklanika and trying to pass a lot of really poky drivers didn’t appeal to me. Doing something new did. We parked.

Within 10 minutes we had wet feet! While trying to cross a small meltwater stream, I stepped on what appeared to be a solid bump of tundra and got a wet foot when it sunk like a sponge. Corrine decided to cross the snow patch above the stream. That worked. Until it didn’t. She sunk into the snow and the stream hidden below! We forged on, still trying to keep to dry ground despite our wet feet. We still had to cross several snow patches until we finally attained the steeper slope, which had less snow.

As we climbed, the breeze picked up. We finally crested one hill and got a view of a vast plateau atop Mount Margaret. The higher part of the mountain to the east was blocked by large snowfields. We headed west, picking our way through snow patches and across wet ground, aiming for a rock outcropping. A strong wind blew at our backs, so we sought shelter behind the outcropping. No luck! The wind swirled around everything. Places that might offer shelter were still covered in a lot of snow. We were both getting a bit cold and put on extra top layers.

“Let’s head back and we can eat at the car,” Corrine said. I agreed.

We climbed over the rock outcropping and suddenly we could see a sheep trail, free of snow, heading along the ridge toward the higher part of Mount Margaret. We had walked right over it, oblivious!

The heck with the cold. Destiny called!

We headed up the dry, snow-free trail, climbing higher on the mountain. We could see the valleys to the north and south of the mountain. Denali rose off to the southwest, the top obscured by clouds.

We stopped before what appeared to be the last pitch to the top. It looked doable, but steep and rocky. I found a mostly sheltered spot behind the ridge, where we had just room enough to sit and eat our lunches. Still a bit windy there, but much better than atop the ridge.

We discussed what to do next.

I was a little surprised, as Corrine usually has hotter summit fever than I do, but I agreed. I had forgotten my gloves back at the car, and my hands were cold. I was fine with going back. As soon as we got back to the ridge Corrine looked up at the last pitch.

“We should do it, or at least give it a try,” she yelled over the wind.

I immediately agreed. It doesn’t take much to spark my summit fever.

We threaded our way up the steep face and were soon on top of Mount Margaret, wind blowing hard. Corrine and I had climbed part of this mountain several years earlier, using a steep approach from the northern end of the Savage River Loop Trail. On that trip the wind howled so strong we had a hard time walking, so we headed down quickly without summiting. This time we stayed long enough on top for a couple of selfies.

Now we had a choice: head back the way we came or attempt to cross the large snowfield below us and see if we could descend the ridge to the east of the one we had ascended. We both love loops, but we weren’t sure how the firm the snow would be.

“Look, there are some people down there crossing the snow,” Corrine said, pointing. “They aren’t having any problems.”

I never did see these so-called people, but that decided it for us. We headed down and stepped out onto the snowfield. And it worked. Until it didn’t.

We would walk along on top of the snow for a few steps, then one leg would suddenly sink knee- or thigh-deep. Maybe a couple more postholes, then more surface walking, then another plunge step into the saturated snow. Our shoes were soon soaked with freezing cold water. But it was funny, too. I smiled as I watched Corrine daintily walk across the top of the snow, suddenly break through, and then wallow around until she was walking on the surface again. I’m sure I looked just as silly.

We finally got to dry ground and wrung out our socks. Down lower it was less windy and warmer, so we each peeled a layer.

We followed a sheep trail down the ridge and soon ran into a group of people hiking up the lower part of the trail, which looks like it has become a human social trail. Back home I found that route was mentioned by Ike Waits in his book “Denali National Park: Guide to Hiking, Photography and Camping.”

We lost the trail amid snow patches and thick alders, but the park road was visible in front of us. We thrashed our way down, finding bits and pieces of game trails, until we got to the road. From there it was a little over a half-mile to our car.

We sealed the hike with a kiss and decided that despite the wind and cold feet, the outing had been much better than what we had planned.

Eric Troyer is a local writer and volunteer. He helps run the Interior Alaska Trails website and produces a free monthly newsletter about trails in Interior Alaska. Email him at fbxtrails@gmail.com to be included on the newsletter distribution list.