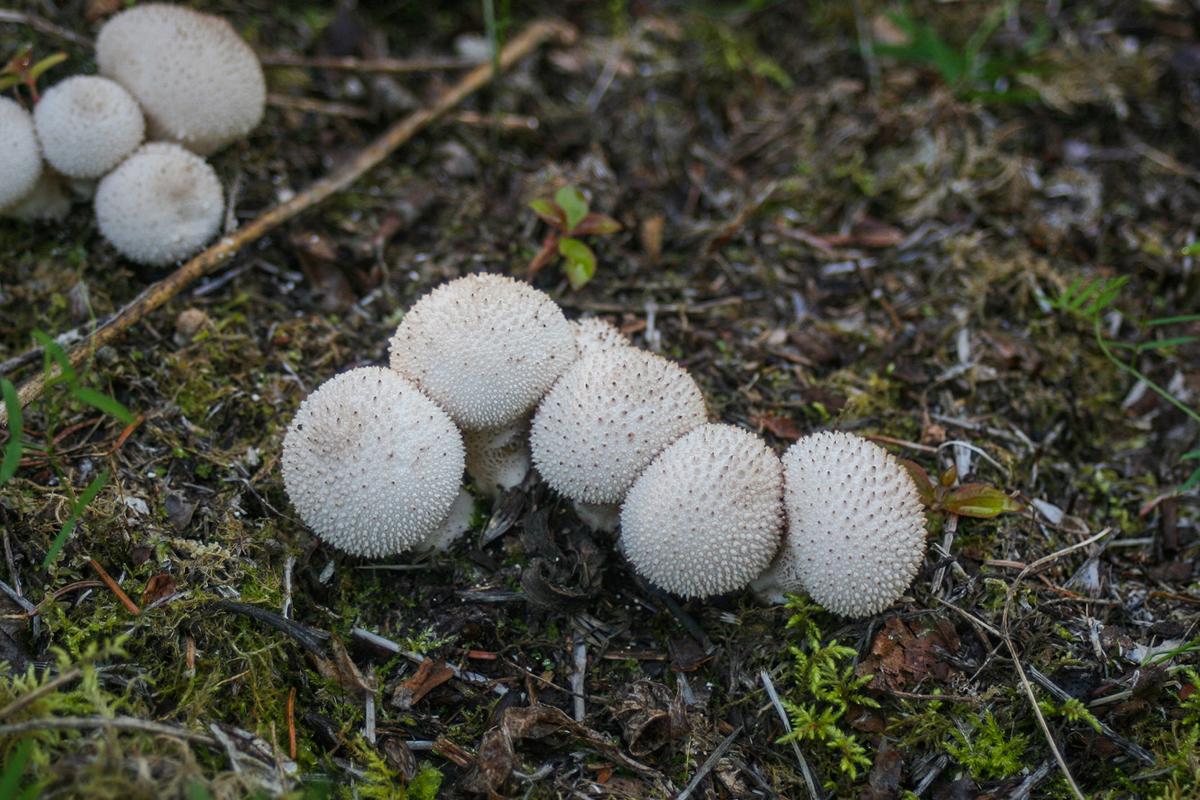 The mushrooms photographed above are lycoperdon perlatum, an edible puffball. 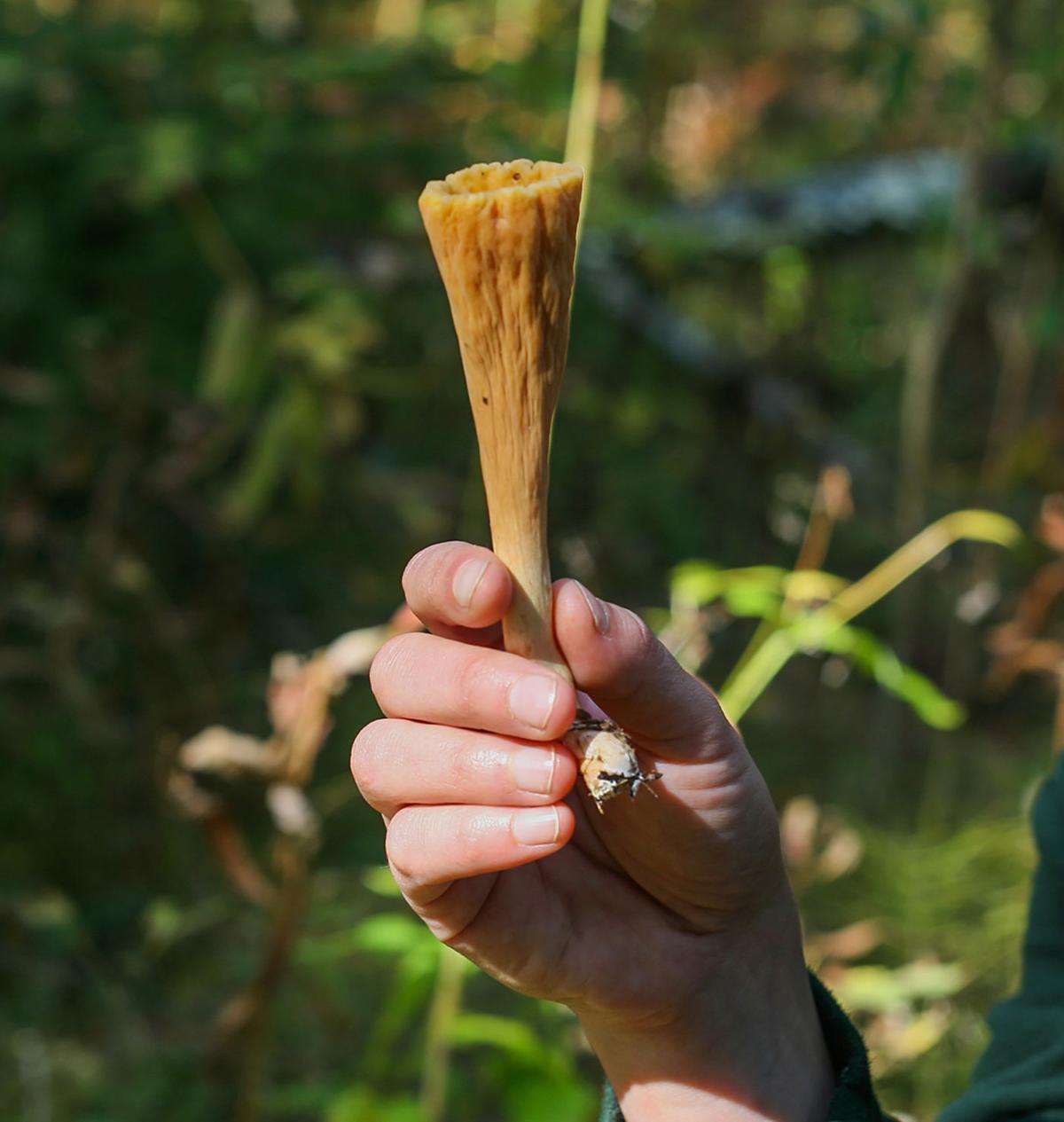 A coral fungus that we identified as probably clavariadelphus truncatus. ALISTAIR GARDINER/NEWS MINER 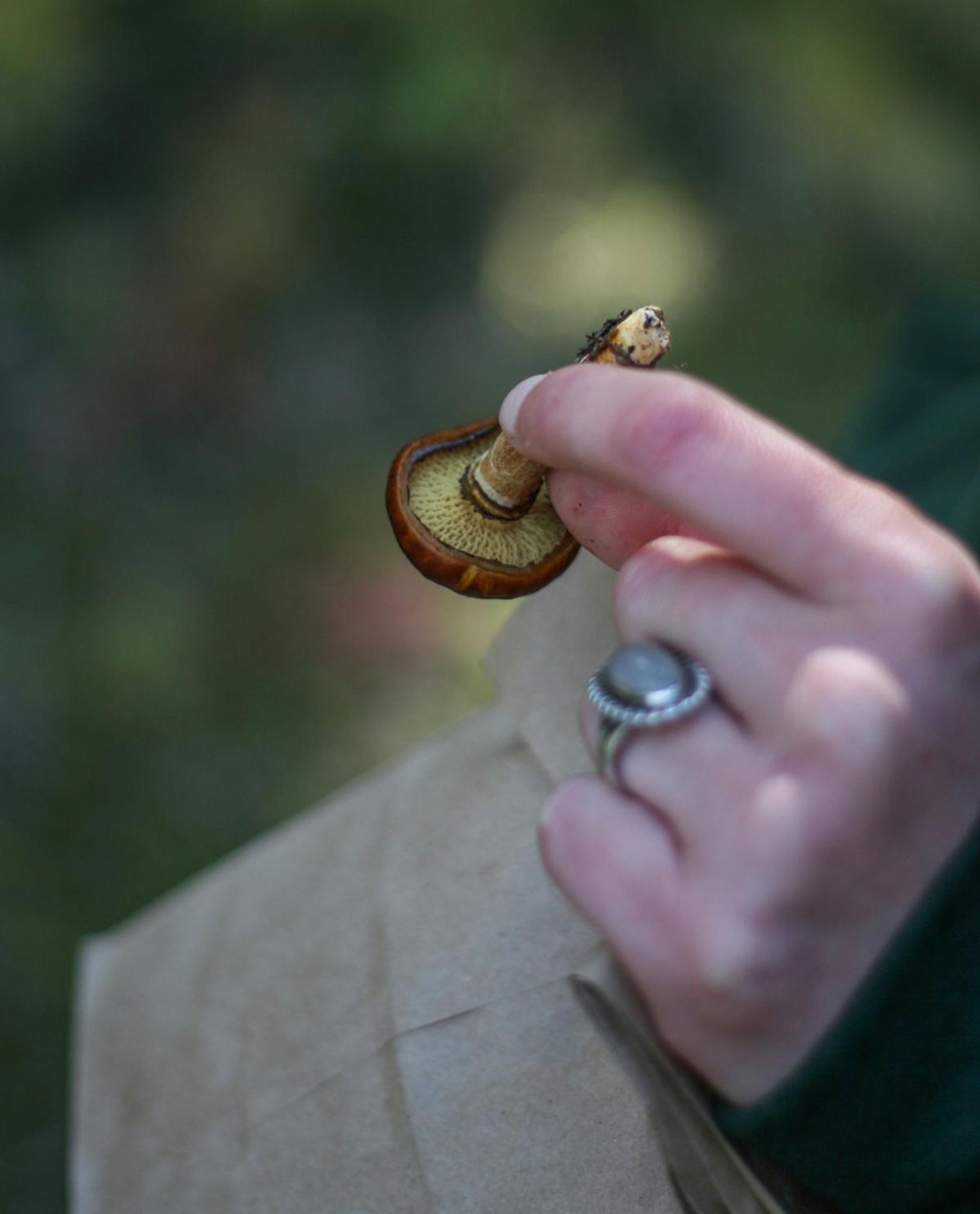 Cassie holds up a porous mushroom to examine. While she thought it may be a Suillus, we were unable to successfully identify it in the field. ALISTAIR GARDINER/NEWS MINER 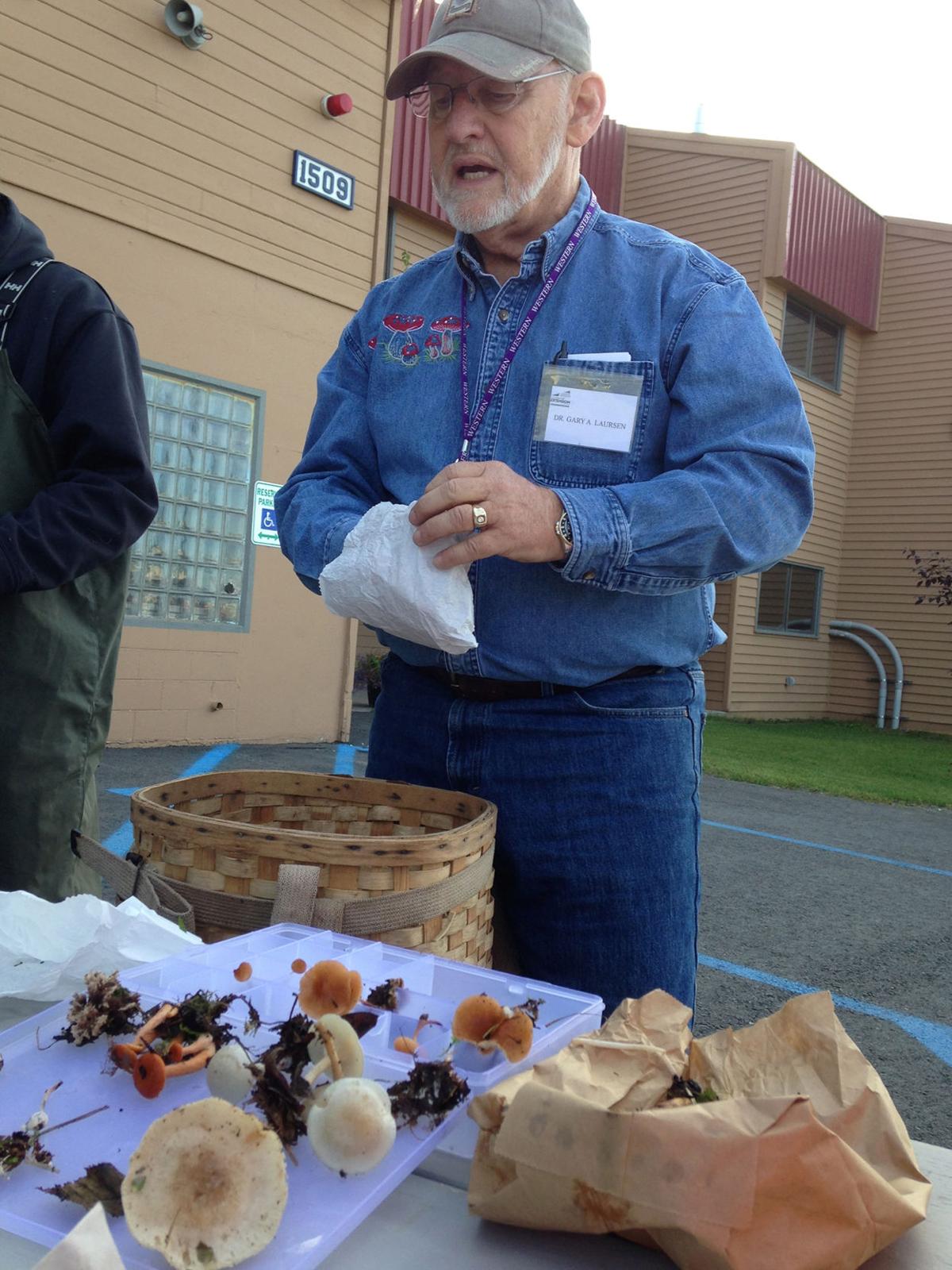 Gary Laursen leads a mushroom identification workshop in Palmer. He hosts up to 18 of these courses across the state, every summer. Photo courtesy Julie Cascio 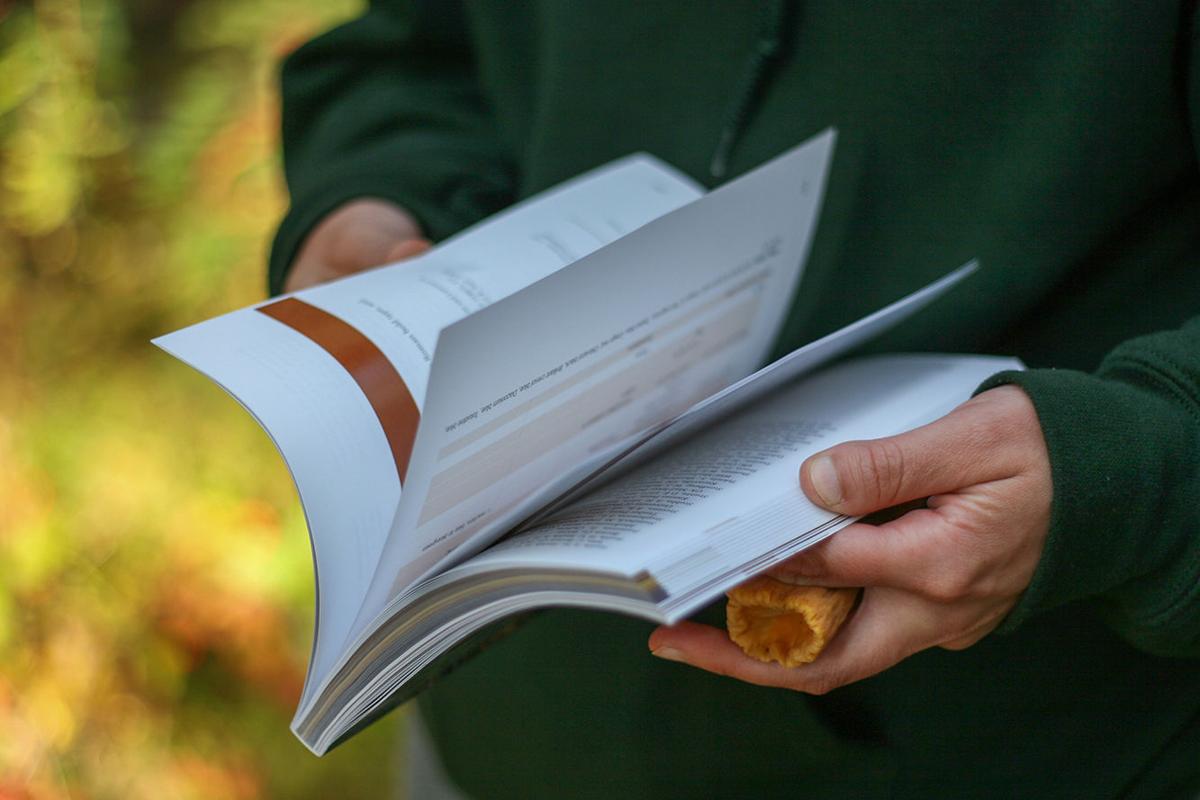 Cassie checks one of the two mushroom guides we brought along with us, in an attempt to verify the ID of what she believed was clavariadelphus truncatus. ALISTAIR GARDINER/NEWS MINER

On a recent Saturday, having had innumerable people tell us how abundant the wild mushrooms pickings have been this year, my partner, Cassie, and I went out searching for fungi. It wasn’t difficult. We were mere seconds into our walk through a local wooded area when we noticed how plentiful the fungi were — we didn’t even need to leave the trail to find a range of exquisite mushrooms, puffballs and lichen.

Full disclosure: I have a very limited expertise when it comes to fungi. Fortunately, I was strolling that day with a botanist, equipped with two mushroom identification books.

With her knowledge base and two reference guides, Cassie quickly spotted various fresh amanita muscaria — which, I was hastily informed, are very poisonous — and old, mangey boletes, which Cassie told me could have been an addition to our dinner if they weren’t so bug-eaten.

While we weren’t specifically foraging, a little farther along we found several other possible side dishes. Cassie pointed out sarcodon imbricatus, commonly known as shingled hedgehog, which is recognizable by the concentric brown scales that form on its cap and is reportedly bitter in taste. In a rotting tree stump, we found some beautiful white coral fungi, which I was told was hericium abietis — also edible.

A little off the trail, a bizarrely shaped orange club fungus caught Cassie’s eye. While it wasn’t listed in either of the guides, she thinks it was the sweet-tasting clavariadelphus truncatus. Later, after pulling several mushrooms apart to examine the flesh, Cassie found a number of still-forming lobster mushrooms. This is, in fact, a misnomer; hypomyces lactifluorum is not a mushroom, but a parasite, which grows inside certain species of fungi, slowly turning them orange. These, I’m told, have a flavor reminiscent of seafood.

While most of the mushrooms we found were past their prime, we eventually found some young lycoperdon perlatum — little white puffballs covered in spiky bumps, growing in clumps and untouched by insects. We collected some into a brown paper bag and took them with us to confirm their identity at home.

Both of the reference guides we brought with us — “Common Interior Alaska Cryptogams” and “Alaska’s Mushrooms: A Wide-Ranging Guide” — were co-written by Dr. Gary Laursen, a University of Alaska Fairbanks adjunct professor and author who’s been studying mycology for almost half a century.

“The thing that really captures most people’s attention here is the phenomenal diversity of mushrooms when we get a good rain,” Laursen said.

As well as various research projects, Laursen teaches between 13 and 18 three-day courses every summer for members of the public all across Alaska. The workshops involve tutelage on the collection, identification and preservation of wild and/or edible mushrooms. This week, he’s been holding workshops in the Aleutian Islands and the Pribilof Islands. Most of the questions Laursen gets from the public fall into two categories: Is it edible? And, is it poisonous?

“I get phone calls from all over the country from poison centers. And I get a lot of calls from people in Alaska who have pets that have eaten something,” he said. “Ninety-five percent of the time it’s not something to be too terribly concerned about. But I can understand a pet owner not knowing what the mushrooms are.”

You could drop Laursen almost anywhere in the state, and he’d have a good grasp on what kind of fungi he’d expect to find in the area. More notably, he can articulate the importance of fungi to Alaskan ecosystems.

“The roles that fungi play in the north and the south differ quite substantially,” he said. “Here, about 45% of the species are mycorrhizal — forming a relationship with the roots of trees. We wouldn’t have a single tree in Alaska if it weren’t for the fungi associated with their roots.”

Another 45%, he said, are saprobic decomposers, which break down and feed on dead organic matter. If it weren’t for these, Laursen said, we’d have problems with feathers and scales and “a lot of wood” piling up.

Tidbits like these are the kind of information that Laursen includes in his classes. He also dives into taxonomy, outlining things like spore color and other identification factors. Part of this is providing participants with a roadmap on how to use mushroom reference books.

“Authors invariably start with light or white spored fungi and move to tan to light orange to orange brown to a kind of dirty brown, chocolate brown, to purple brown, to black. And they tend to put groups of mushrooms in their books according to the color of the spores,” he said. “Anyone can do a spore print.”

This year, Laursen noted, has been a good year for mushroom-hunting due to heavy bouts of rain. The day before we spoke, Laursen said he’d been out with a class of sixth graders in a wooded area behind their school.

“We found mushrooms like you wouldn’t believe — just everywhere,” he said. “We probably found 55 species of mushroom, walking around for just 25 minutes yesterday afternoon.”

Growth conditions for mushrooms are improving as the climate shifts, leading to an increasing diversity of fungi, Laursen said. He said that, in recent years, he’s seen fruitings of mushrooms that he’s never seen before. Part of this is that the areas around Fairbanks are seeing more rain over the summer months. The mushroom seasons, Laursen said, are extending. Some species of mushroom start fruiting in the spring; in the summer, others pop up; then fall rains provide a grand finale before everything dies away in the winter frost. In the past, Laursen said, the fall mushroom season is over around the end of August.

“We’re seeing fruiting much later. ... Mushrooms have been fruiting like mad,” Laursen said. “As long as we have rain, things just continue to fruit, well into mid- or even late-September now. And we’ve had a few years in the last 10, where we didn’t see freezing until well into mid- and late-October. Normally it’s the first freeze that really starts to knock out the fruiting bodies.”

It’s not just heavy rain and a dearth of frost that sets the stage for an ample mushroom crop. Forest fires, too, provide what fungi need to flourish, such as nutrient-rich, ash-laden soil. As such, Laursen said that next year will likely be a productive year for some species, like morels.

“I’ve seen people take 30-gallon garbage cans into old burn sites, the first spring after a forest fire, and fill them up with morel fungi,” he said. “They’re pyrophilous, which means they’re fire-dependent for mass fruiting.”

This increase in mushroom fruiting rate may be a cause for concern. The metabolic process of a mushroom involves the excretion of water and CO2. Laursen noted that the vast expanse of peaty soil in the north is becoming more exposed as rising temperatures drive the permafrost lower.

“It allows for the peat to become exposed to fungal decomposition, which exacerbates the CO2 levels in the atmosphere,” he said. “With the exposure of those peat carbon-rich systems and warming trends allowing the fungi to fruit and more species to fruit, we have this high-latitude exacerbation of CO2.”

The carbon footprint of fungal activity has become one of the focuses of Laursen’s research.

I originally intended to end this article by describing the meal that Cassie and I cooked after our mushroom-hunting trip. Unfortunately, I must confess: Amid the excitement of a good aurora forecast and a prolonged trip to the grocery store that evening, we totally forgot about the puffballs we had harvested. But, no matter — according to Laursen, we still have at least a month to head back into the forest.