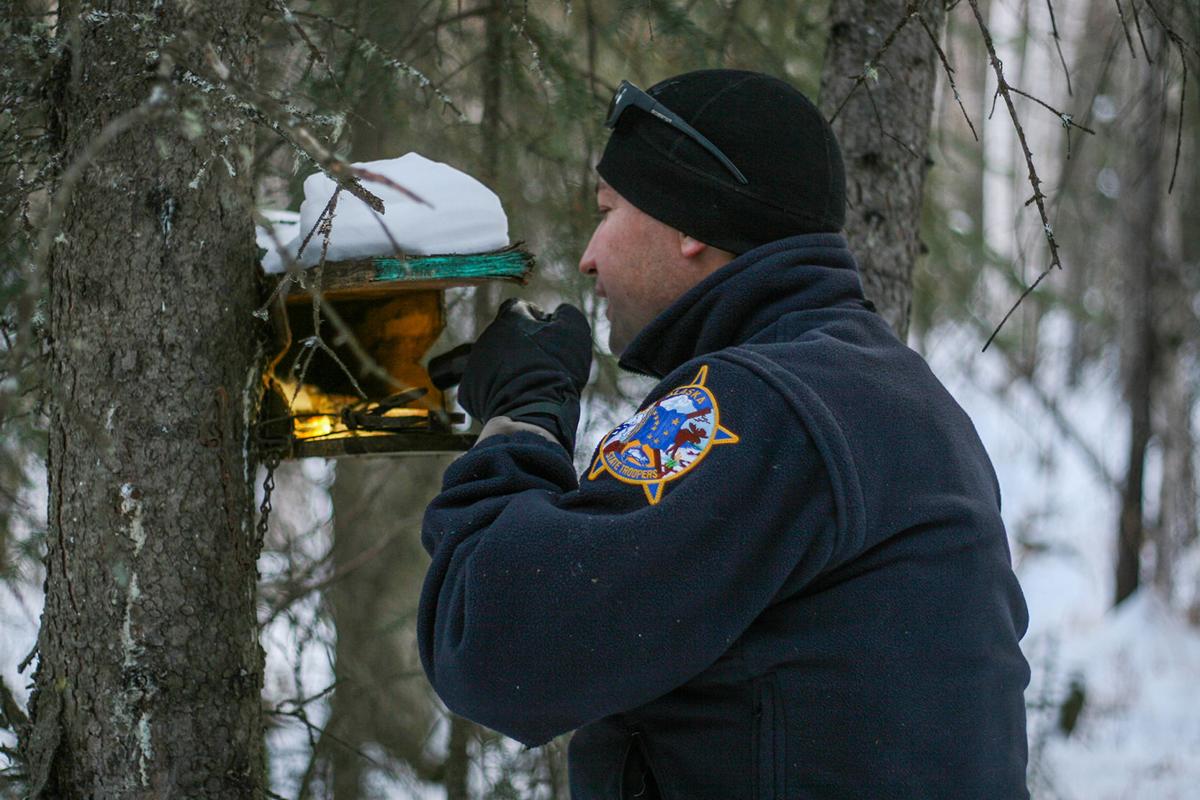 Sgt. Dan Valentine checks the legality of a trap. He recognizes most trappers by the design and materials they use for the trap. Alistair Gardiner/News-Miner 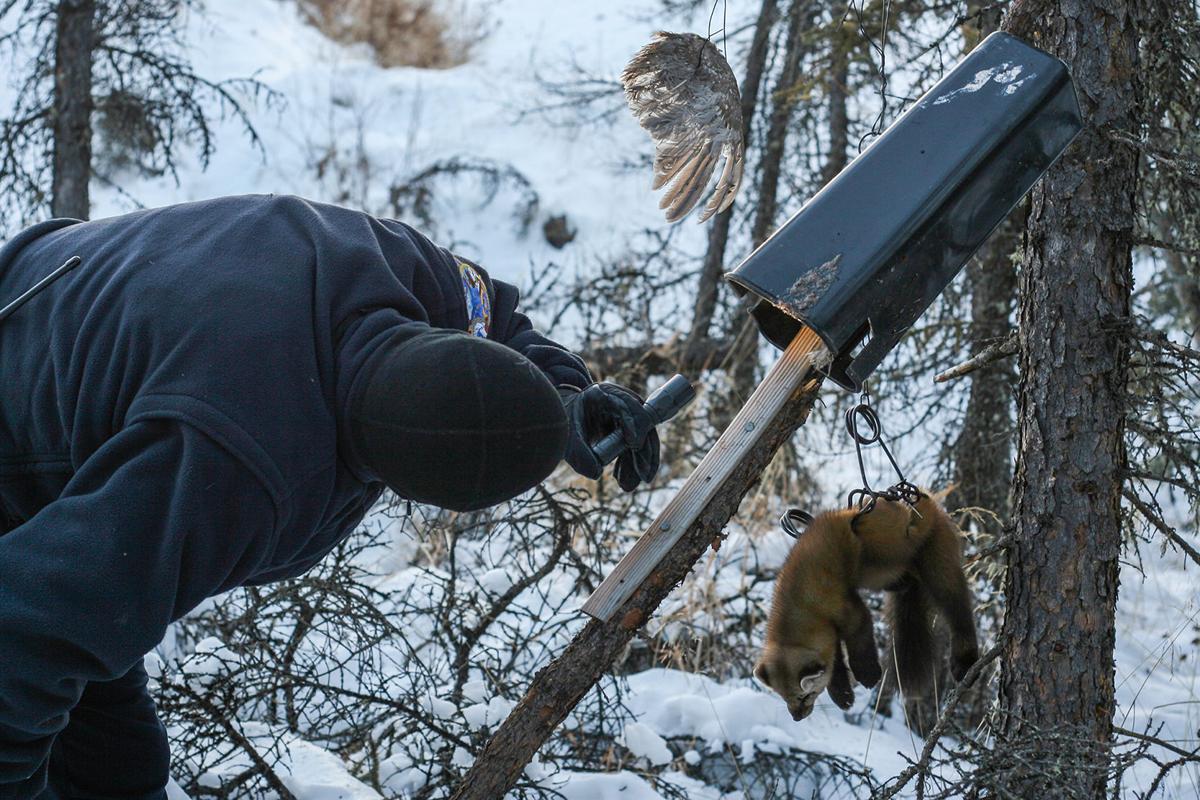 Sgt. Dan Valentine shines a flashlight into a trapping box. One of the primary things he checks on each trap is whether the bait is legal. Alistair Gardiner/News-Mienr 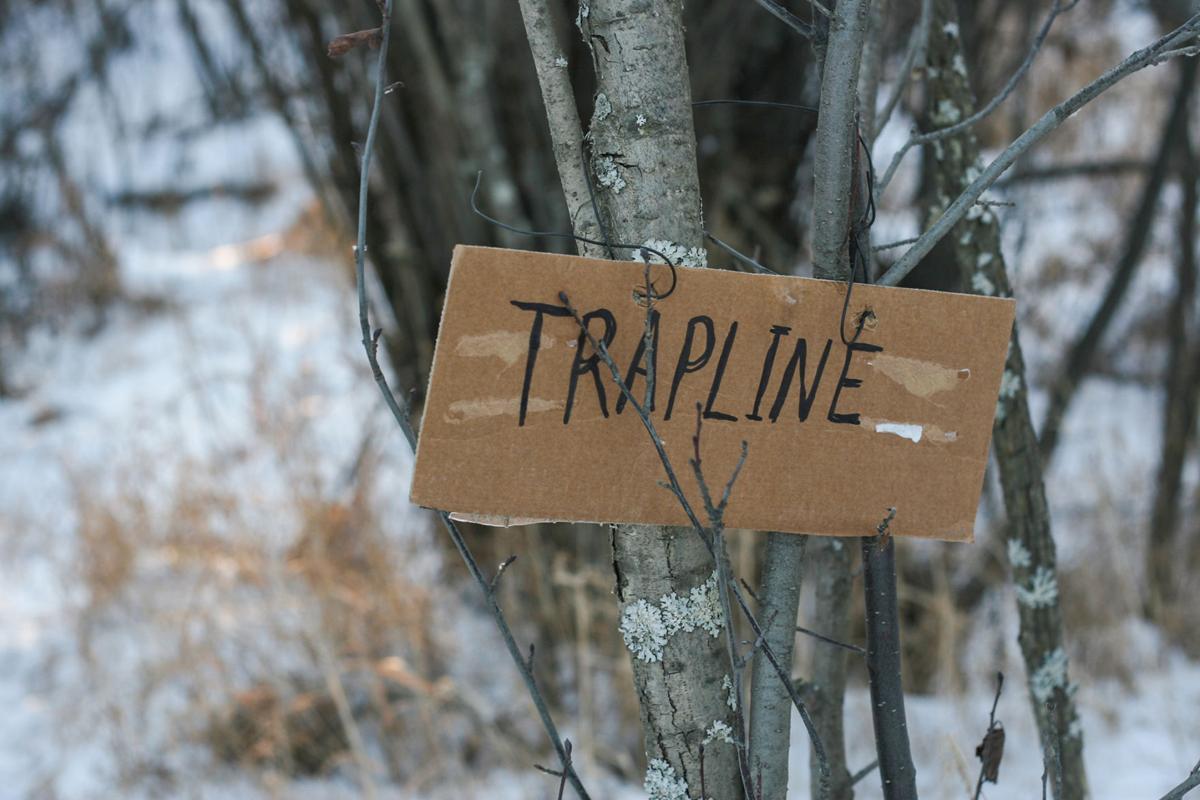 A sign warns people that a trapline is on the trail. Alistair Gardiner/News-Miner 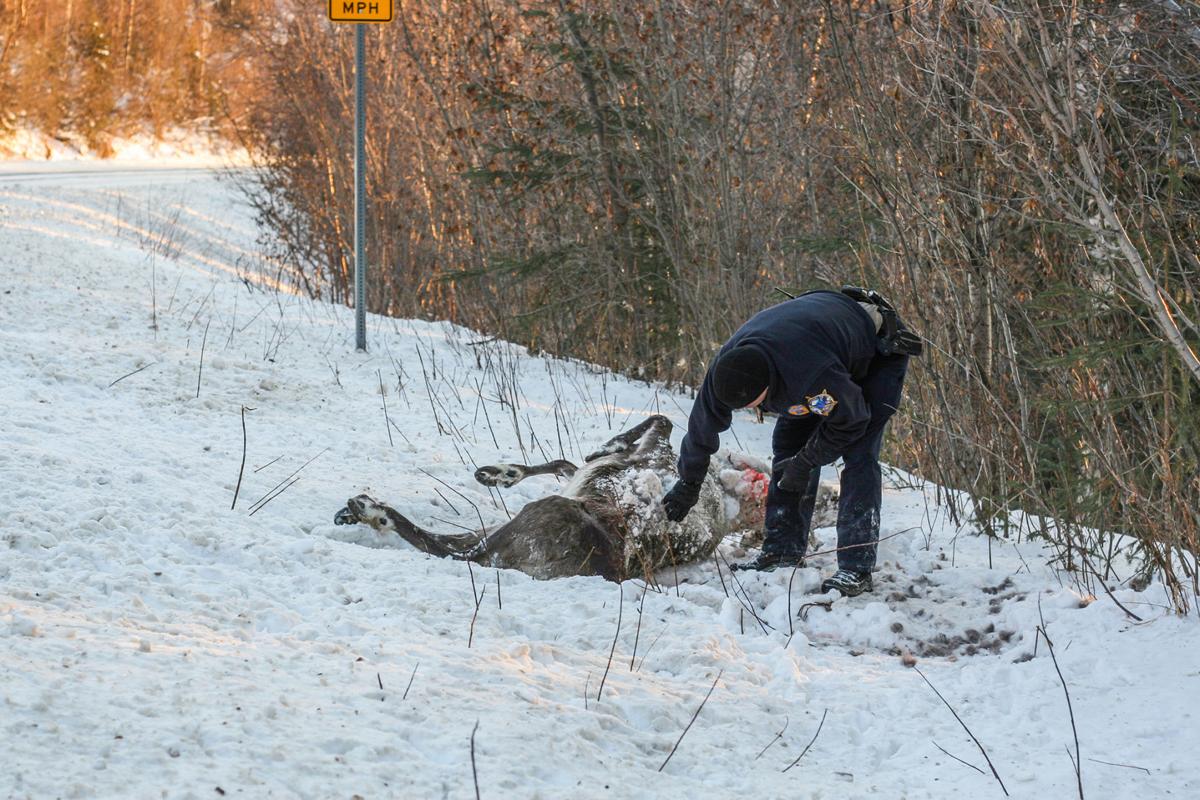 Sgt. Dan Valentine checks a caribou carcass that he spotted on the side of the road while driving to look for traplines. ALISTAIR GARDINER/NEWS MINER 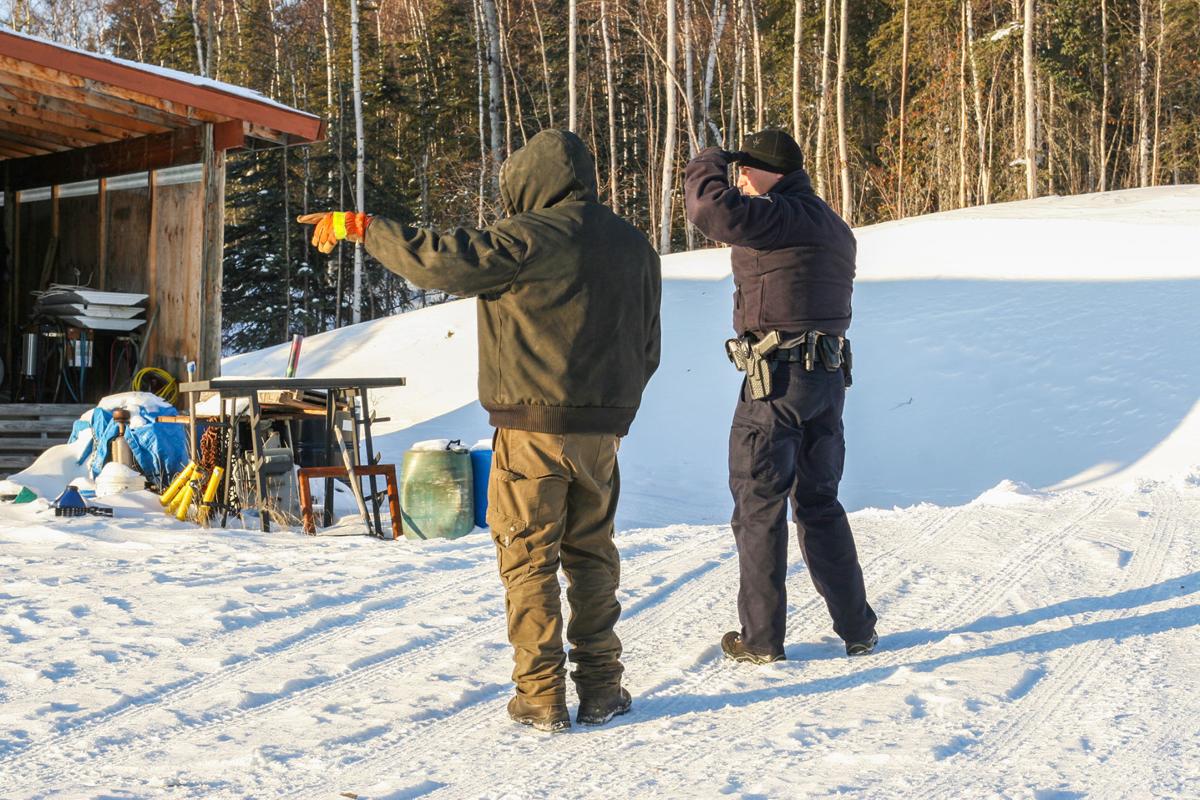 When the call comes, he answers — Sgt. Dan Valentine speaks to the victim of a burglary, which derailed him from checking his traplines. Alistair Gardiner/News-Miner 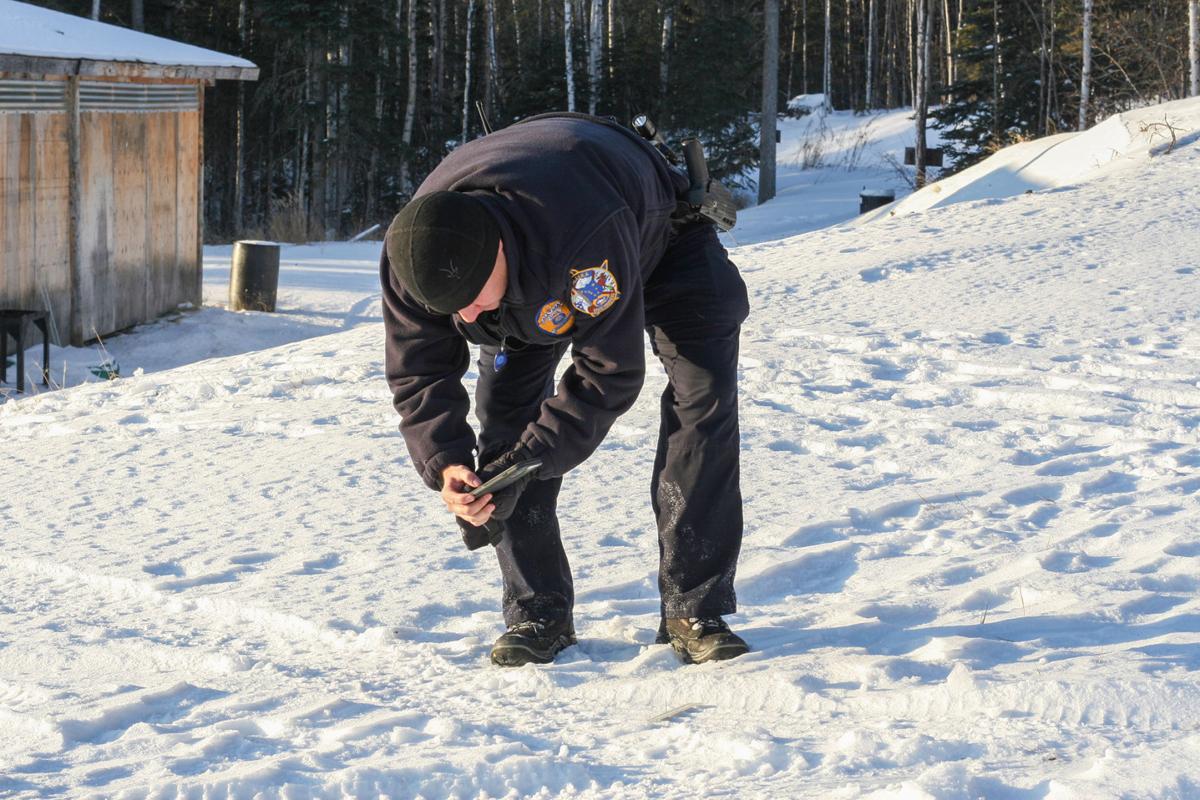 Sgt. Dan Valentine takes a photograph of a tire track as evidence, while investigating a burglary. Alistair Gardiner/News-Miner

Sgt. Dan Valentine checks the legality of a trap. He recognizes most trappers by the design and materials they use for the trap. Alistair Gardiner/News-Miner

Sgt. Dan Valentine shines a flashlight into a trapping box. One of the primary things he checks on each trap is whether the bait is legal. Alistair Gardiner/News-Mienr

A sign warns people that a trapline is on the trail. Alistair Gardiner/News-Miner

Sgt. Dan Valentine checks a caribou carcass that he spotted on the side of the road while driving to look for traplines. ALISTAIR GARDINER/NEWS MINER

When the call comes, he answers — Sgt. Dan Valentine speaks to the victim of a burglary, which derailed him from checking his traplines. Alistair Gardiner/News-Miner

Sgt. Dan Valentine takes a photograph of a tire track as evidence, while investigating a burglary. Alistair Gardiner/News-Miner

It was just after 9 a.m. and still dark as we left the city of Fairbanks. It was a brisk, clear day, and it wasn’t long before all that was visible were forest-covered hills, blue skies and the horizon.

“Every job I’ve ever had, there’s always been a large chunk of it outdoors,” Sgt. Dan Valentine said. “I wouldn’t want to have to be in an office every day.”

Valentine clearly enjoys his job. He’s been an Alaska Wildlife Trooper for 12 years and was a park ranger at Denali National Park for three years. Valentine is a native Alaskan and has lived all across the state.

“I didn’t become a park ranger until I was 28. It took me that long to work a few different jobs and feel like I had enough life experience,” he said. “Once you move into law enforcement, it’s a completely different ballgame.”

He said he had never even handled a firearm prior to becoming a park ranger.

Today, his objective was to find and check the legality of traplines. We were heading up a highway that Valentine requested I not name. There were several spots he wanted to check, which he knows are favored by trappers.

Trapping season, he said, is one of the slower times of the year for wildlife troopers. Valentine has worked all over the state and through hunting and fishing seasons in places such as Talkeetna, Kodiak and even a 22-day patrol in the Bering Sea. Bristol Bay, where he’s spent five summers working the commercial sockeye salmon season, was the most exacting.

“I had commercial fished a couple of years — my last year of high school and my first year of college,” he said. “It was south of Bristol Bay on the Alaskan Peninsula. It was nothing like Bristol Bay. It was the same kind of fishing, but the pressure was nothing like that. To then — years later — go and see the Bristol Bay fishery … I just couldn’t believe it. It’s like no other fishery.”

Commercial fishing patrols, Valentine explained, tend to be hard because there is often a lot of money at stake for the fishermen — the majority of whom are from out of state. Trapping is a whole different arena: Almost all participants are local and often spend years cultivating the areas in which they lay sets. It is also, unlike hunting and sport fishing, not a growing pursuit.

To be specific, a resident trapping license costs $25; for nonresidents, a license will set you back $405.

The other major difference between trapping and hunting are the regulations — or relative lack thereof. There is no bag limit for most species and there are no rules regarding how often you have to check your traps. Valentine explained that the two primary offenses for which he gives out citations are using illegal bait — things such as game meat and sport-caught salmon — and not taking down traps once the season is over. To illustrate his point, Valentine held up a binder than contained a complete list of this year’s state Department of Fish and Game regulations — it was a veritable tome. Conversely, the trapping regulations make up a small 44-page pamphlet.

On the back of the pamphlet was a list titled “A Trapper’s Responsibility,” which included things such as “Concentrate trapping in areas where animals are overabundant for the supporting habitat” and “Trap in the most humane way possible.”

“None of those are regulations, it’s just a trapper’s code of ethics,” Valentine said, adding that most of the trapping community are good at self-regulating. “If you catch all the martens in the area, you’re not going to have any martens to catch later. I was talking to another trapper earlier this year and they stop trapping marten if 30% of their catch is female. They always want to have more females to keep that population going.”

Valentine’s experience has left him with eagle eyes. As we continued to drive, his vigilance never wavered.

“What is that? That looks like a caribou antler,” he said, as we drove past a horde of ravens picking at something.

It was hardly visible to me, but we pulled over and Valentine began digging through the snow. He uncovered the body of a long-deceased caribou — one leg was mangled, and there was a hole in the animal’s head. Valentine examined the rest of the torso, before pulling a twig off a nearby branch. He pushed the twig into the hole and found it was several inches deep.

“Yep, it was shot,” he said, before pointing to the leg and adding, “That big a wound makes me think it got hit by a car. The sad thing is someone could have reported this, and we have charities that could have come and salvaged all the rest of the meat.”

It quickly became apparent that Valentine’s job is more expansive than he was initially letting on. Just over an hour into the drive, he got a call from dispatch: A burglary had been reported, and he was the nearest available trooper. The traps would have to wait.

“It happens a lot,” he said. “Now I’ll be talking to someone about a burglary. It all depends on what happens.”

On the way to the scene of the burglary, we passed a couple of cars parked at pull-offs. Enforcing trapping regulations doesn’t involve talking to a lot of people; but Valentine still seemed to know who everyone was.

“That’s a trapper — and that’s a trapper,” Valentine said as we zoomed past. “I’ve never actually met that guy, but I’ve seen his traplines.”

Valentine arrived at the burglary victim’s place of work and asked him a few questions before we drove to look at the residence in question. The cabin was a mess; the victim’s belongings had been thrown everywhere and he’d had several firearms and some personal items stolen. Valentine gathered some items as evidence, which he bagged so they could be checked for fingerprints.

As he was examining the surroundings, he paid particular attention to tire tracks and footprints in the snow, which he photographed. He also kept an eye out for any discarded stolen items or things left behind by the thieves and checked the canopy for any game cameras that nearby residents may have installed in the trees.

Following his initial investigation, we headed back to the highway to continue looking for traps. Valentine spotted a nearby gravel pit and pointed out it was a likely spot for a thief to chuck out anything that they had decided not to keep. At this point, it became apparent that the skills he was employing to investigate the burglary were the same as those he uses to look for traplines. He followed a set of footprints over to a ditch, then looked up and sniffed the air.

“Smell that?” he said. “That’s a trapper. They often use animal musk.”

Sure enough, about 25 feet away he found a box and a dead marten hanging off it. Valentine carefully approached, checking for additional nearby traps, before shining a flashlight into the box to check the bait. He explained that the trapper had used a conibear trap.

“It sits right here, over the opening, and when they go through it, it snaps. In terms of ethical trapping, a conibear ends the life pretty quick,” he said. “That one’s all good.”

As I turned to take a photograph, I saw another animal carcass. I asked Valentine whether it was being used to lure the marten to the trap. His eyes widened and he cautiously beckoned me over.

“Why don’t you carefully walk over here?” he said, before looking around and pointing to a nearby tree. “You see that chain on the tree there? Somewhere over there is a buried trap. I did not step right there, because that’s where you’d usually set it. My guess is it’s under that spruce tree there.”

“I haven’t met this guy yet, but I’ve seen a few of these,” he continued. “You’ll see more traps along the highway with a black newspaper box like that one.”

Valentine often recognizes a trap’s design, even if he hasn’t met the person who builds them. On the way back into town we stopped at several other pull-offs to look for traps. As we walked down a frozen stream following nearly snowed-over footprints, Valentine pointed out intermittent circular outlines along the trail.

“So this guy always carries his stuff in a 5-gallon bucket,” he said. “The other guy, he had a crate. I could see an outline of it.”

On one trail, we passed a sign that read “Traplines.” Valentine said this is primarily for the sake of dog-walkers. Some trappers will carve out a path and place traps right in the center. We arrived at the end of the trail and I suddenly realized we were surrounded by large hooped metal wiring.

At another pull-out, Valentine found another set of marten traps, which he didn’t recognize.

“I’ve not seen the blue wire or short boxes before,” he said, sounding surprised.

As we drove back toward the city the sky darkened, but Valentine remained chipper. Although he has trapped since he was a kid, it seems his job allows him to reap all the benefits of the pursuit — with the exception of the fur.