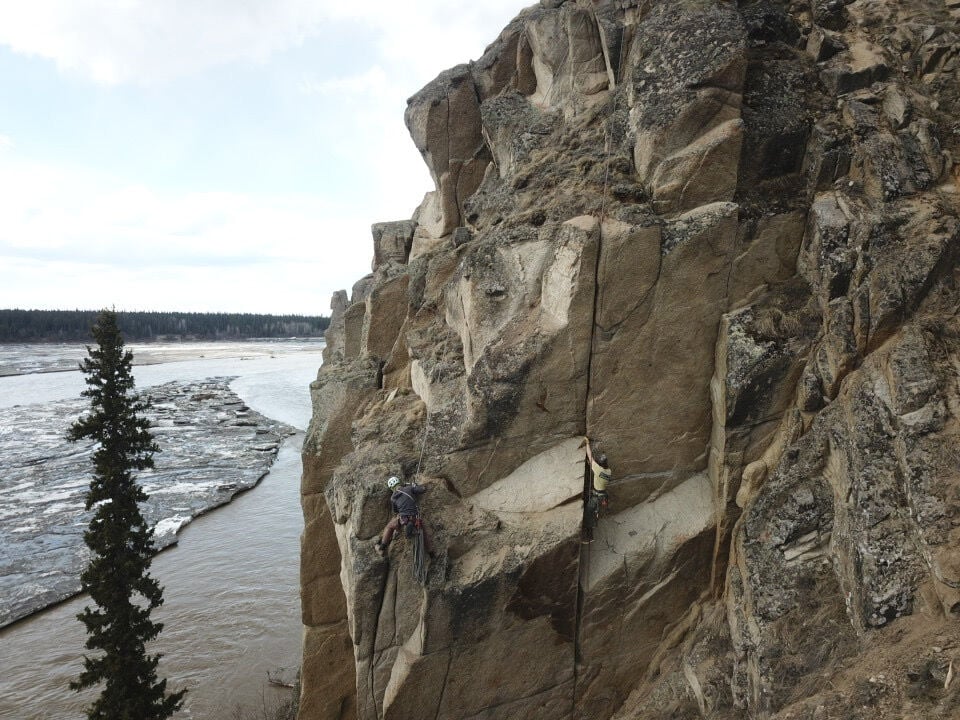 Over winter, Tristan O’Donoghue and a few friends noticed a possible climbing spot above the Tanana River near Birch Lake. This summer, they've been bushwhacking and working to clear a trail to the area, which O’Donoghue believes is rife for outdoor recreation opportunities. Courtesy Tristan O’Donoghue 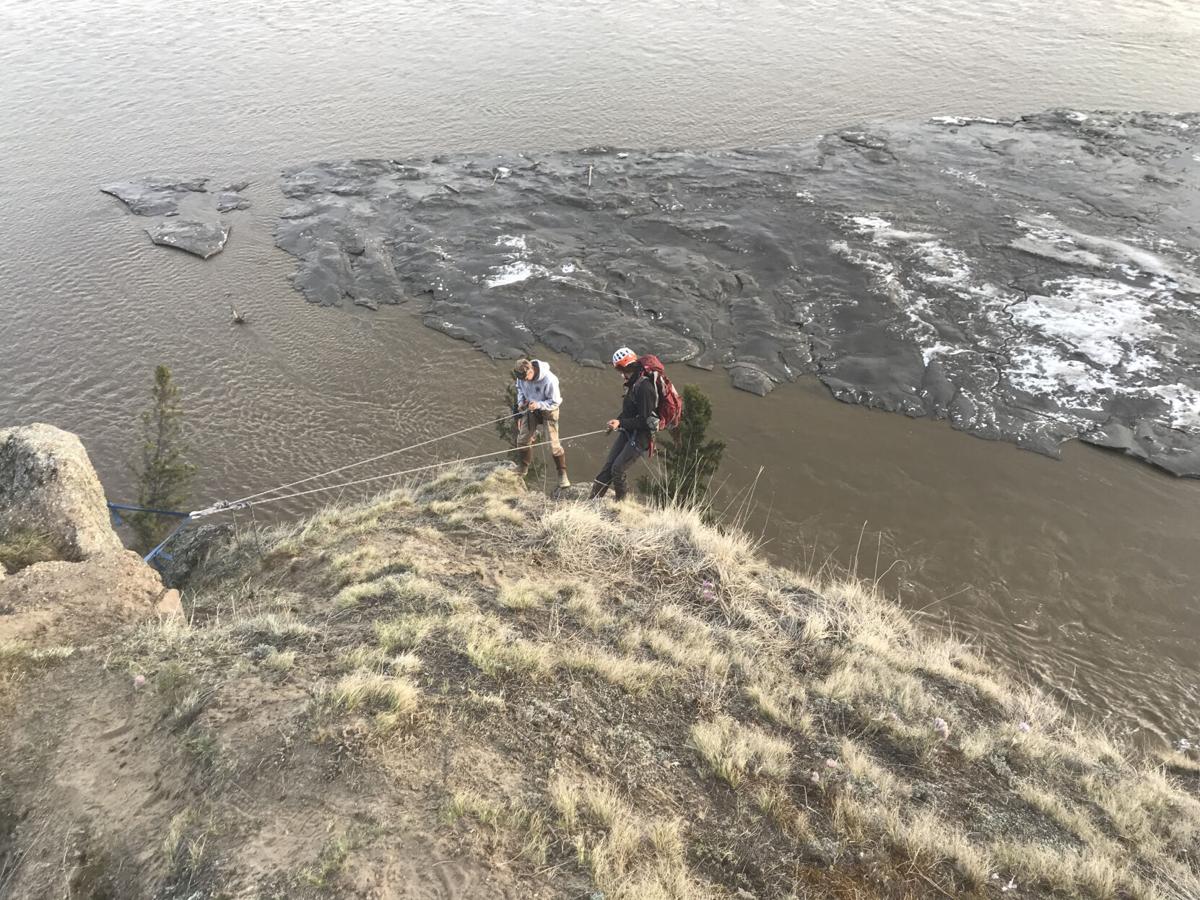 From left, Ethan Berkeland and Johnathan Koenig, climbing above the Tanana River in May. Courtesy Tristan O’Donoghue 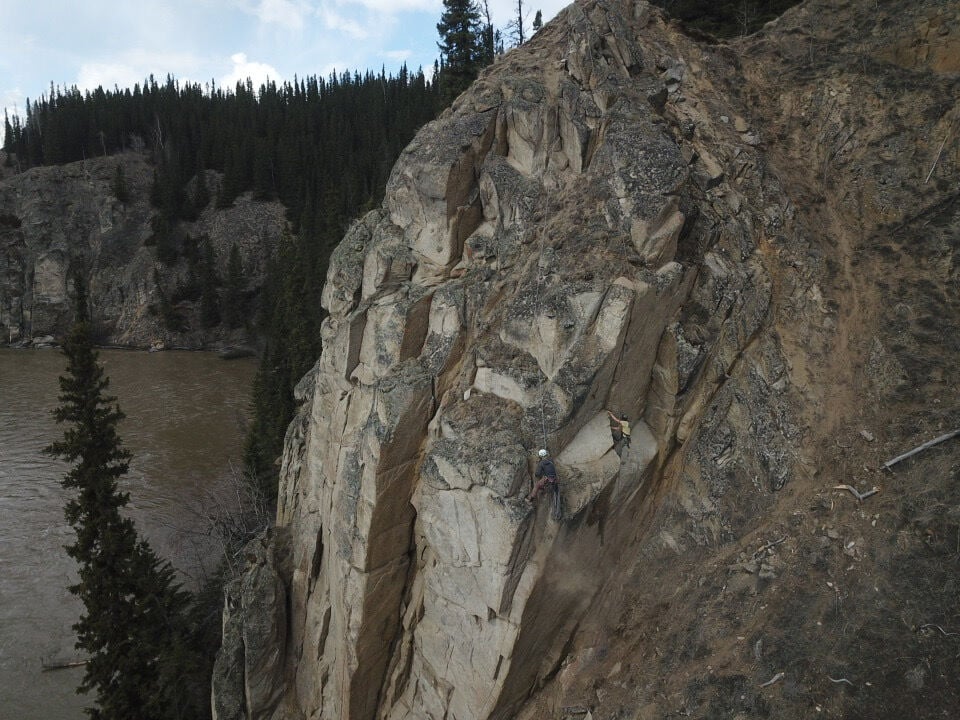 From left, Grant Wilson and Matt Capp scale a wall of rock, near Birch Lake in May. Courtesy Tristan O’Donoghue 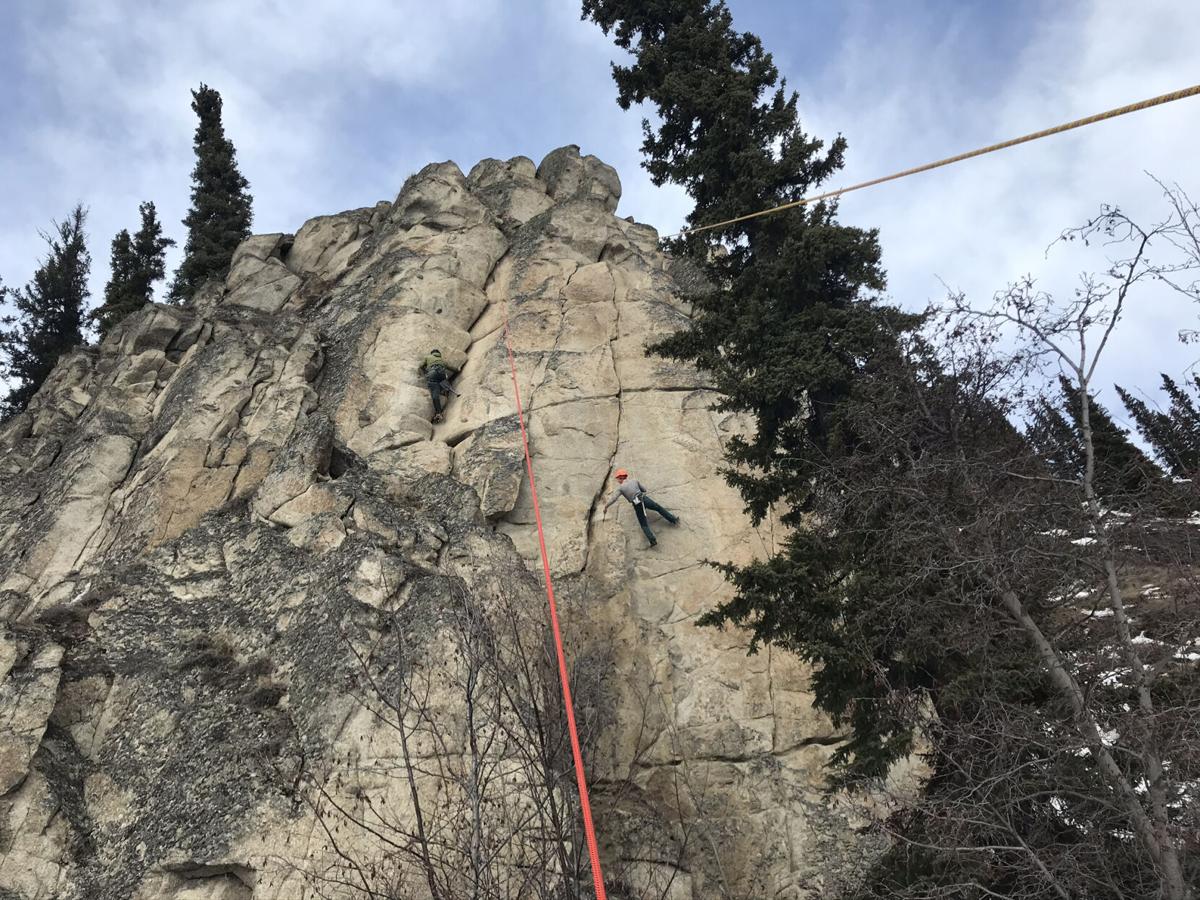 From left, Brons Gerrish and Ethan Berkeland climb above the Tanana River in May. Courtesy Tristan O’Donoghue 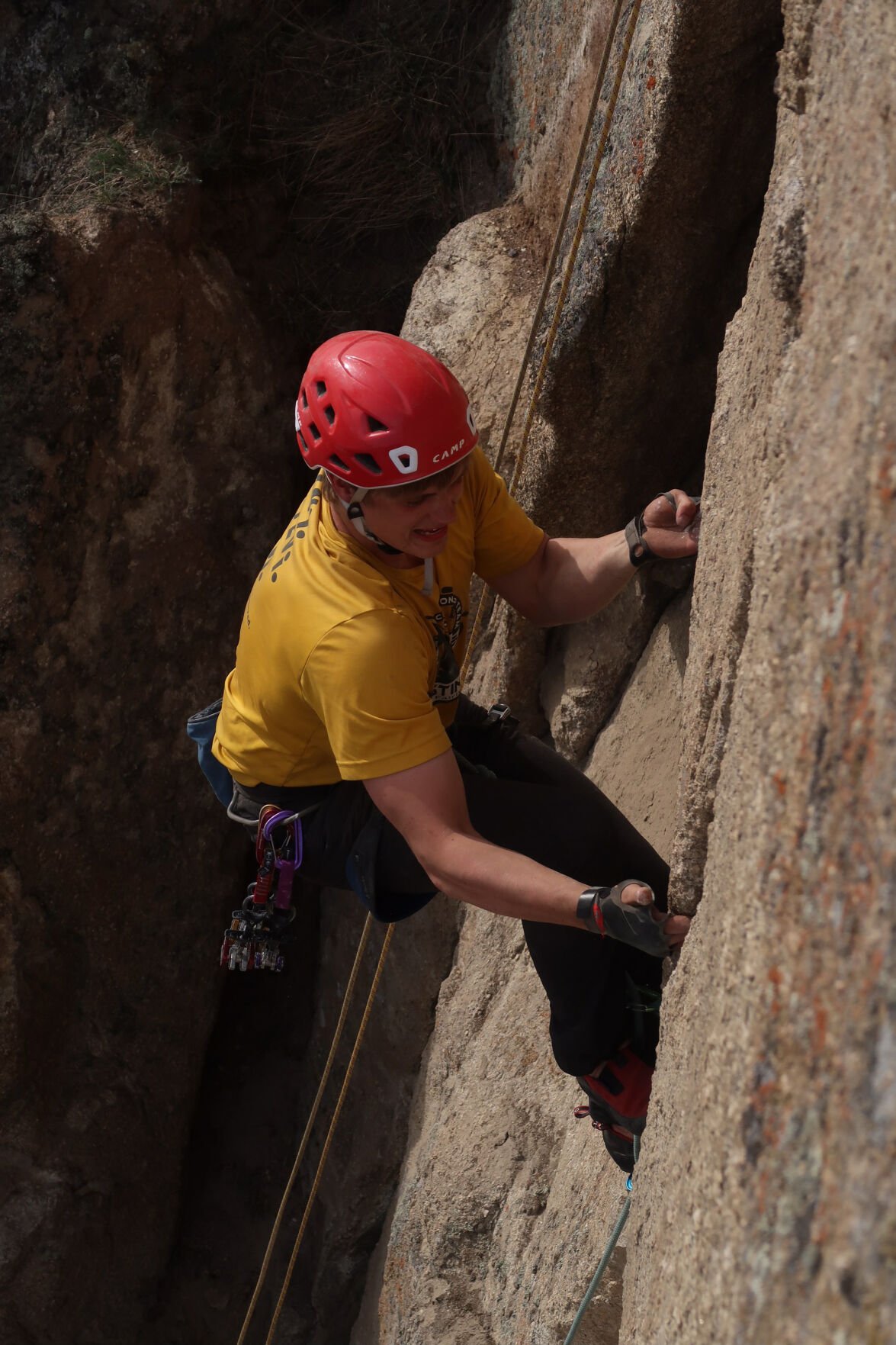 Over winter, Tristan O’Donoghue and a few friends noticed a possible climbing spot above the Tanana River near Birch Lake. This summer, they've been bushwhacking and working to clear a trail to the area, which O’Donoghue believes is rife for outdoor recreation opportunities. Courtesy Tristan O’Donoghue

From left, Ethan Berkeland and Johnathan Koenig, climbing above the Tanana River in May. Courtesy Tristan O’Donoghue

From left, Grant Wilson and Matt Capp scale a wall of rock, near Birch Lake in May. Courtesy Tristan O’Donoghue

From left, Brons Gerrish and Ethan Berkeland climb above the Tanana River in May. Courtesy Tristan O’Donoghue

Tristan O’Donoghue, who’s 21 and born and raised in Fairbanks, has been climbing for roughly four years. But it’s only recently that he’s taken things to the next level by heading out into the wilderness with climbing buddies to find new, unclimbed rock.

“I’m a pretty avid rock climber and all my friends and I have been pretty into rock climbing recently,” O’Donoghue said. “And we’ve just been on this binge of finding rocks that are good for climbing.”

O’Donoghue said over this past winter he kept seeing photographs on Facebook of an area that looked prime, just above the Tanana River. He couldn’t figure out its exact location, so he reached out to the woman who was posting the pictures.

After a chat with her, O’Donoghue and a few friends ventured out to search for the cliff. They spent time in February and March snowmachining around the area, and eventually figured out where the rocks were. But, come spring, a problem arose: access to the climbable rock was nonexistent.

So O’Donoghue and his friends did what many determined Alaskans would: they started building a trail.

“We tried to do this direct shot through this black spruce forest,” he said. “It’s only 2 1/2 miles of trail to get to the Tanana river.”

The trail begins just off the Richardson Highway and ends at a bluff, several hundred feet above the river, with spectacular views.

“Along the bluffs are the granite outcrops. The one we’ve spent most time developing is approximately 120 feet, but there are other rock groups much much bigger than that just down river from that,” O’Donoghue said. “It’s just a crazy area. We were surprised that we just happened upon it through some sleuthing.”

O’Donoghue is currently studying at the University of Alaska Fairbanks with a major in biological sciences. This year he’ll become a senior, and he said biology and wildlife is the path he’s selected for a career. According to O’Donoghue, this is where his recreational pursuits and academic interests converge.

“Being from Fairbanks and Alaska, that’s just the thing to do,” he said. “So I’ve gotten super into that. The world is very interesting, and biology is the thing that captivated me in high school.”

O’Donoghue said they initially started hiking out to the area after the snow melted, via the nearby Boy Scout property. After examining the rocks and determining they were apt for climbing, figuring out an easy access point became a priority.

“So we looked on the (Fairbanks North Star Borough) website and looked at the zoning for that area,” he said. “We realized that all the area around Birch Lake is owned by the borough.

“Just from previous knowledge and some searches on the borough website, I knew if there’s land owned by the borough, it’s for the people,” O’Donoghue continued. “So you can use the land as long as you’re not placing permanent structures or anything like that on the land. Trails fall under the category of temporary.

“So we just started hacking down black spruce trees.”

O’Donoghue said that most of the work took place over two full days. He and a small group of friends and fellow climbers took machetes and handsaws, and carved out a path. As it stands, O’Donoghue said, it remains a work in progress.

“It’s like a path, not necessarily a trail,” he said. “We’re totally cool with people going out there and trying the hike, but there’s kind of a disclaimer: it’s no Angel Rocks. There’s no boardwalk, it’s still swampy.”

O’Donoghue said, while scrappy, the path will take you right to the bluff. In the future, they’re hoping to clear it a little more and perhaps even put in a boardwalk.

“This is a rough draft of what we’re hoping to do over the next few months,” he said. “It’s a pretty easy hike as far as the trail goes.”

In a message to me, O’Donoghue wrote: “To find the trail: park at birch lake pull off. Walk across the highway and look for two pink pieces of flagging tape at head height. This marks the start of the trail and to get to the river just follow the closely spaced pink flag tape there. We’ve had parties comment that it was quite easy to follow the markings out there.”

Once you get there, O’Donoghue said there are clear under-appreciated spaces that are rife for recreation opportunities. This includes areas that would make good camping pots and routes you can hike along the bluff.

“It’s just beautiful scenery,” he said. “There’s some great climbing out there. That’s why we’re really hoping to develop the area out there. We think they could be some of the best places to climb in Fairbanks.”

By “develop” O’Donoghue isn’t just referring to ensuring the trail is more user-friendly; he’s also talking about cleaning rock to make it safe for climbers. He explained that, in the climbing world, you enter a new echelon when you start building relationships with certain climbing areas.

“That’s the other exciting part. We love rock climbing so much and in the sport there’s kind of this hierarchy of people who spend time to work on cleaning rock and stuff,” he said. “It’s been cool to see the other side of the sport.”

Out at the bluff, O’Donoghue and his friends have been doing “traditional climbing,” which means top-roping. O’Donoghue said he encourages others to come and join them in developing the area.

“You’ll need to bring out traditional climbing gear: cams and nuts and all that,” he said. “We’re just trying to get some more opportunities to climb in Fairbanks.

“We’re trying to recruit some like-minded people to chip in and see where this area can take us. Lately it’s been feeling almost like a second job,” he continued. “I’ve probably been out there 15 times out there in the past few months. There’s been a core group of about five or six people who are as invested in it as I am.”

Mostly, he’s just excited to have stumbled across the place.

“We’re really stoked on it,” he said. “It’s just a beautiful area of the interior that’s undeveloped in terms of the outdoor activities that could go on out there.”