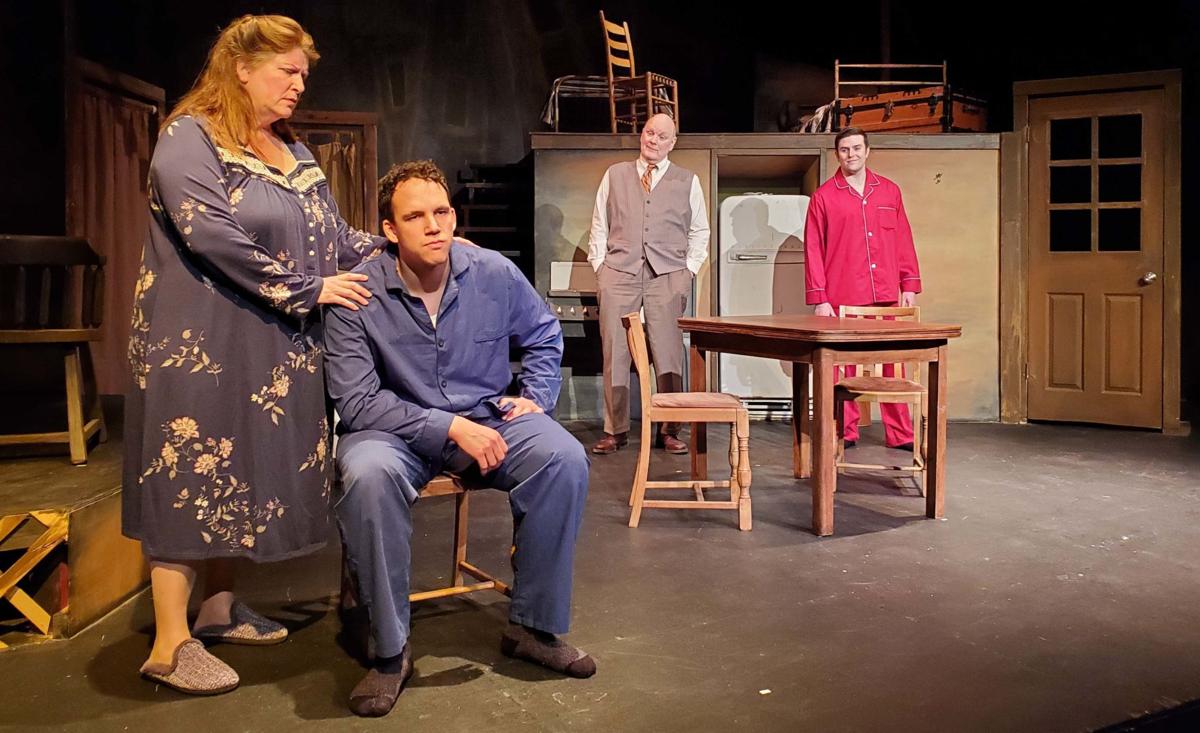 From left, Julie Jones as Linda Loman, Armando Saenz as Biff, Bruce Hanson as Willy Loman, and Kris Luddington as Happy, star in "Death of a Salesman," opening this weekend at the Hap Ryder Riverfront Theatre, 1852 Second Ave. 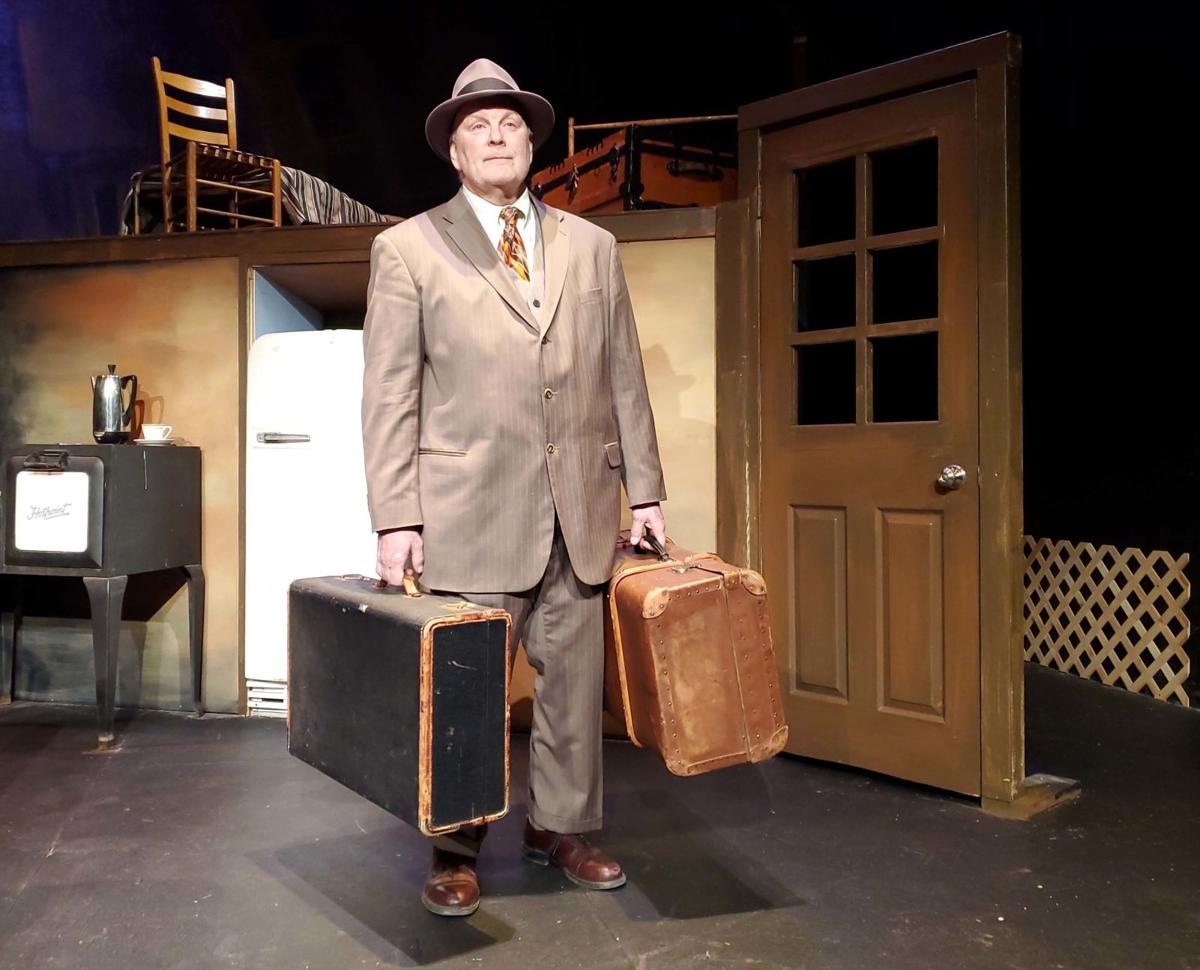 Bruce Hanson portrays Willy Loman in the American classic "Death of a Salesman."

From left, Julie Jones as Linda Loman, Armando Saenz as Biff, Bruce Hanson as Willy Loman, and Kris Luddington as Happy, star in "Death of a Salesman," opening this weekend at the Hap Ryder Riverfront Theatre, 1852 Second Ave.

Bruce Hanson portrays Willy Loman in the American classic "Death of a Salesman."

It opens Friday at Hap Ryder Riverfront Theatre, 1852 Second Ave., for a three-week run, delving into the psyche of a man always on the road, forever pursuing what he thinks he’s destined to achieve — regardless the costs to his life, family and friends.

It’s a meaty role, one that Bruce Hanson was eager to get hold of.

“I hate to sound like a pad answer, but it’s an iconic role in a number of ways,” he said. “It’s one of the standard roles of American theater. It’s also iconic in that it’s a huge character within the role. It’s a man of extremes in flashes of change. It requires bold choices.”

Hanson, now 64 years old, recently retired from his position as choir director at North Pole High School, allowing him to pursue a craft he loves — acting on the local stage. That’s why he auditioned for the part of Willy Loman, seeing it as the perfect character to challenge him.

“Willy is bold. The actor has to make bold choices,” Hanson said. “This is one of those shows that it’s vital to trust your director. The choices have to be huge.”

Stepping up to direct is Heath Robertson, a veteran of both the Fairbanks Drama Association stage and the director’s chair. He called the play relevant to today’s world as it deals with relationships within the American family.

“Hope, fear, trust, aspiration, love, care, lies — these are relevant to everyone at anytime,” Robertson said. “Of course the story takes place in America during the beginning of the commercial revolution, so the American dream serves as a backdrop, but I think the play is about relationships more than a comment on commercialism.”

“Death of a Salesman” is noted for its heavy nature, and the cast has worked well, Robertson said, in tackling those emotions.

“Some characters don’t have to dive as deep into the emotional landscape of the play, but I think everyone is enjoying being a part of a heavy piece. Light roles that don’t get heavy serve an important purpose in the play. And the four or five actors who have had to go down an emotional road have done so with courage and grace. I am really lucky to have such a great cast.”

As well, Hanson noted the heavy toll of the play while reflecting on Willy.

“I’ve been terrified and neurotic and anxious,” Hanson said. “It’s like Evel Knievel. If I don’t jump, it won’t happen. I can’t imagine a role that has tasked me more.”

And like Robertson, Hanson, too, says it’s just as a vital a production now as it was when Arthur Miller wrote it.

“The play is timeless,” Hanson said. “It’s all the elements of life. It has self-worth, family values, mental illness, legacy in what you leave your family. What is the definition of a successful life?”

Picking up the part of Linda Loman, Willy’s wife, is Julie Jones. She called it the hardest play she’s ever performed.

“You see these people, the characters ... the lines, and there’s a lot of them, there’s not a throwaway line,” Jones said. “It was crafted the way it was by Arthur Miller for a reason. Every role counts in this. It gives you the time yet it is timeless.”

She called Linda the plaster of the family, trying to hold the relationship together between Willy and his sons, Biff and Happy. She knows Linda is dependent on her husband because of the era the play is set, and she also knows Linda has no way to get out into the world to make their positions better.

“She’s trying to hold her house together,” Jones said.

And like Hanson and Robertson, she also touted the vitality of “Death of a Salesman.”

“For some people, because it isn’t in six second soundbites, it might be slow to them, but every word they hear will bring them to their knees,” Jones said. “When you don’t find balance, you will potentially lose everything. It’s very relevant.”

Contact Features Editor Gary Black at 459-7504 or at twitter.com/FDNMfeatures.

What: “Death of a Salesman,” written by Arthur Miller, directed by Heath Robertson, produced by Fairbanks Drama Association

Tickets: Tickets are $25 adults; $20 seniors, military and UAF students; $15 teens ages 13-18. Tickets are available online at AKtickets.com, by calling 456-7529, or at the box office one hour before showtime. Reservations are recommended.

Alaskan Climate Change: What We Can Do to Stop It