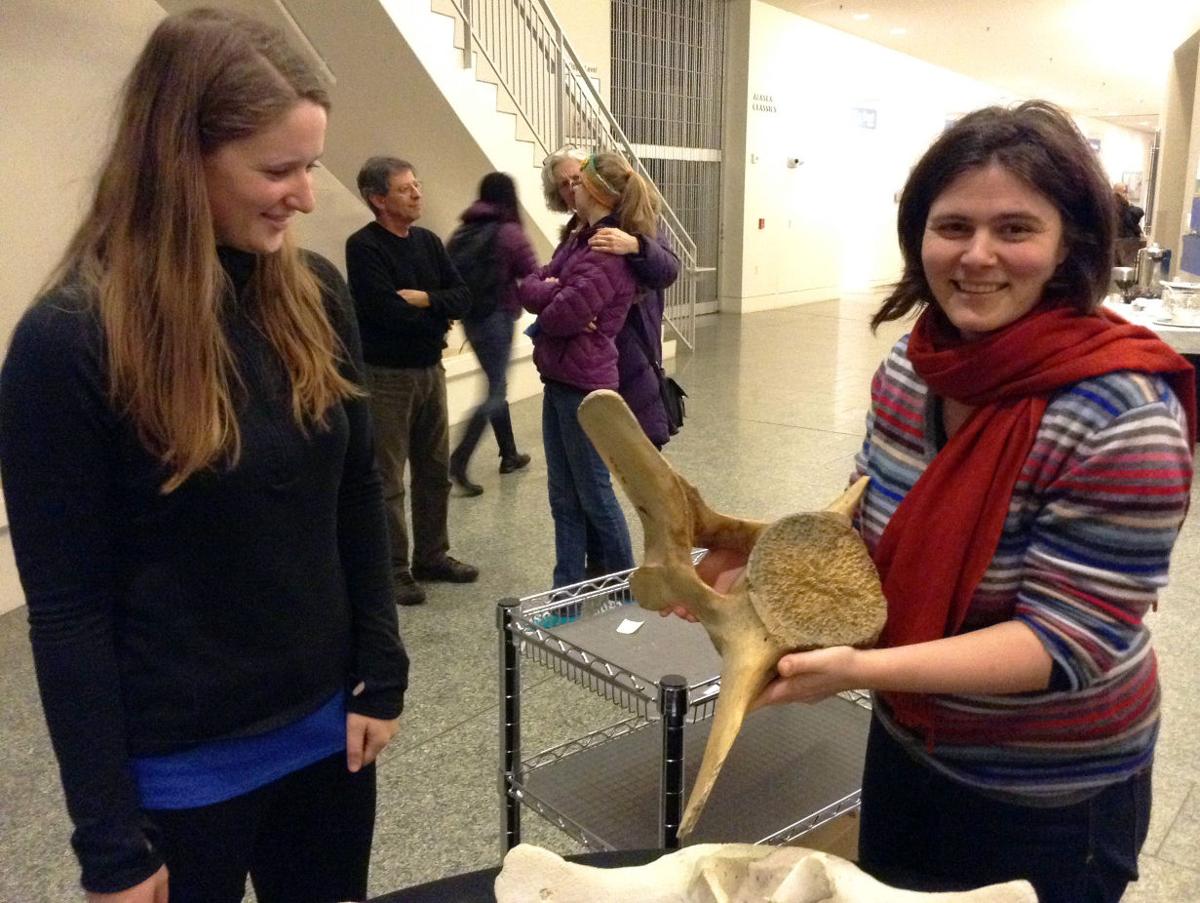 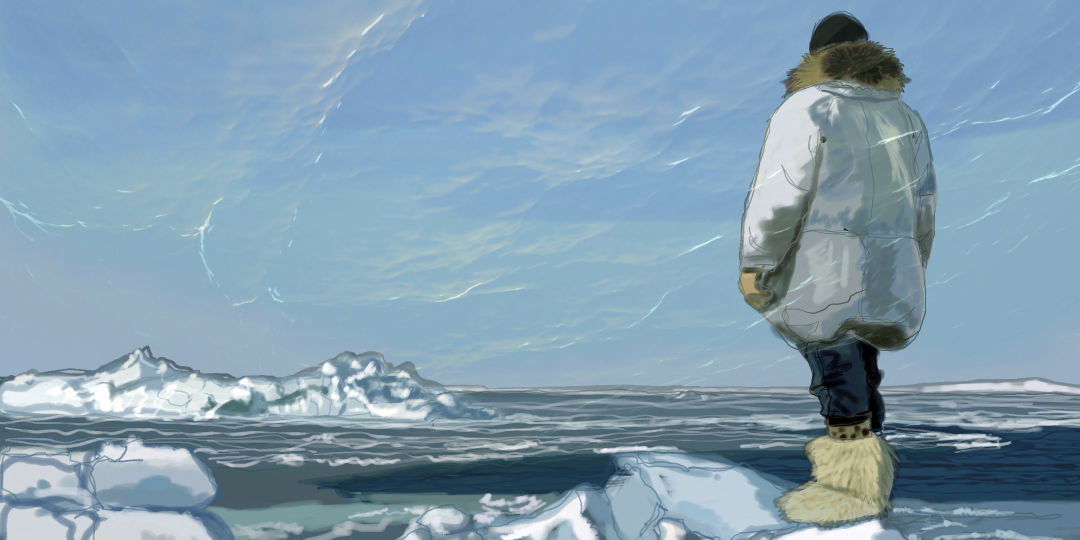 An Inupiaq hunter scans the horizon for whales in a still from the museum’s animated film “Arctic Currents.” 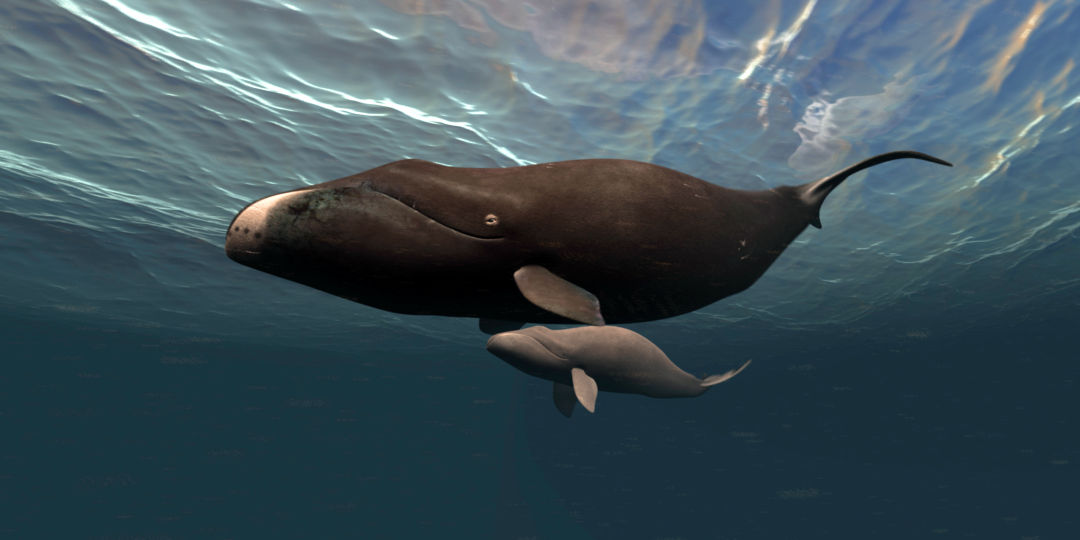 A bowhead whale calf weighs about a ton at birth. 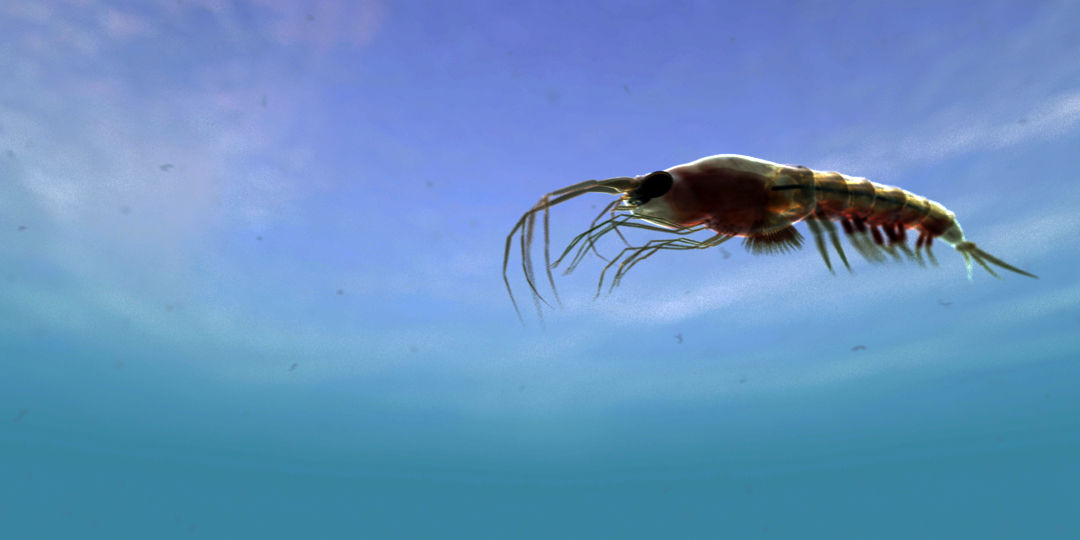 A krill in a still from the museum’s animated film, “Arctic Currents: A Year in the Life of the Bowhead Whale.”

An Inupiaq hunter scans the horizon for whales in a still from the museum’s animated film “Arctic Currents.”

A bowhead whale calf weighs about a ton at birth.

A krill in a still from the museum’s animated film, “Arctic Currents: A Year in the Life of the Bowhead Whale.”

Bowhead whales are one of Alaska’s iconic animals. Giants of the Arctic, they live their entire lives in the coldest waters of the Northern Hemisphere; they don’t migrate to warmer southern oceans like their cousins the gray whale or humpbacks.

They are also at the center of the culture of the Inupiaq people of the north, who have hunted bowheads for thousands of years. Generations of these whalers have watched the whales pass by their shores. This traditional knowledge has aided scientists as they strive to understand the role of bowhead whales in the changing Arctic ecosystem.

Bowhead whales are huge. The largest adults weigh as much as 100 tons — about 16 T-Rexes or 12 elephants —and can measure more than 60 feet in length. They are thought to be the longest living mammal on earth. Harpoon tips from the 1800s have been found in their skin, suggesting they can live around 200 years.

Unlike other whales, they do not have dorsal fins on their backs. They do have gigantic heads — which make up a third of their body length — and use them to break through thick ice. Like other marine mammals, bowheads do not have gills and must breathe air to survive.

The University of Alaska Museum of the North cares for a wide variety of objects relating to bowhead whales, from preserved bones and baleen to objects made from these materials, such as masks, baskets and scrimshaw carvings. There are paintings and drawings depicting the history of whaling in Alaska on display throughout the galleries.

Museum educator Gabrielle Vance said kids are curious about bowhead whales and really identify with them. At the Fairbanks premiere of the museum’s animated film “Arctic Currents: A Year in the Life of the Bowhead Whale,” she overheard one young viewer whispering, “I wish I was a whale!”

That kind of curiosity is a natural incentive to connect bowhead whales to larger topics like science, culture and even art.

The museum’s education team displayed a table of specimens and artifacts at the event, including a whale vertebra spanning almost three feet. Comparing that to a bone from other, land-based Alaska mammals, like a tiny vole or even a human vertebra, shows how unique bowhead whales are.

“When people see a piece of baleen and the objects made out of the material, like a baleen basket or a whale bone mask, it helps them look at a whale not only as an awesome mammal but also as part of a more complex system,” said Maïté Agopian, the museum’s public programs coordinator. “It helps them make a connection between the animal and its cultural uses.”

Asking kids to look at the objects and figure out the part of the whale these objects are made out of can lead to better understanding of a wide variety of subjects.

Looking at the color and the material leads to questions about the structure of the bone (science) or the weaving process (culture and art).

“Using objects and comparisons are strong tools that trigger interest and comprehension of the world in a connected way,” Agopian said. “That’s what museums do: use objects to share and learn about the science, culture and art of Alaska.”

Parents can help kids learn about bowhead migration and behavior by watching the museum’s film online. They can also visit the special exhibit “Arctic Odyssey: Voyages of the R/V Sikuliaq,” which looks at all the ways oceanography fuels Arctic exploration.

Or they can try making a food chain at home. Start with a series of nesting cylinders representing bowhead whales, krill and phytoplankton. Make your own paper tubes or repurpose kitchen containers to create a set. Parents and kids also can look at maps together and compare the locations of Alaska coastal villages with bowhead whale migration routes.

Museum educators have observed how powerful the connection with bowhead whales can be for even the youngest of us. At a program offered recently at the Noel Wien Public Library featuring the “Arctic Currents” film, Vance met a budding young scientist. “He came up to me after the film to show me the three pages of notes he took.”

Theresa Bakker is the manager of Marketing and Communication at the University of Alaska Museum of the North. Contact her by phone at 474-6941 or by email at tabakker@alaska.edu.

•  The average weight of adult bowhead whales is 50 tons. That’s about 500 adult humans.

• Bowhead whales are the second largest animals on earth. Only blue whales are larger.

• Instead of teeth, bowheads and other baleen whales have several hundred fringed plates called baleen.

You can view the museum’s animated film “Arctic Currents: A Year in the Life of the Bowhead Whale” as part of the museum’s movie lineup in the auditorium. (http://bit.ly/uamnmovies)

It is also streaming online. Check the museum’s website for more information or visit the blog documenting the creation of the film (http://bit.ly/ArcticCurrents)