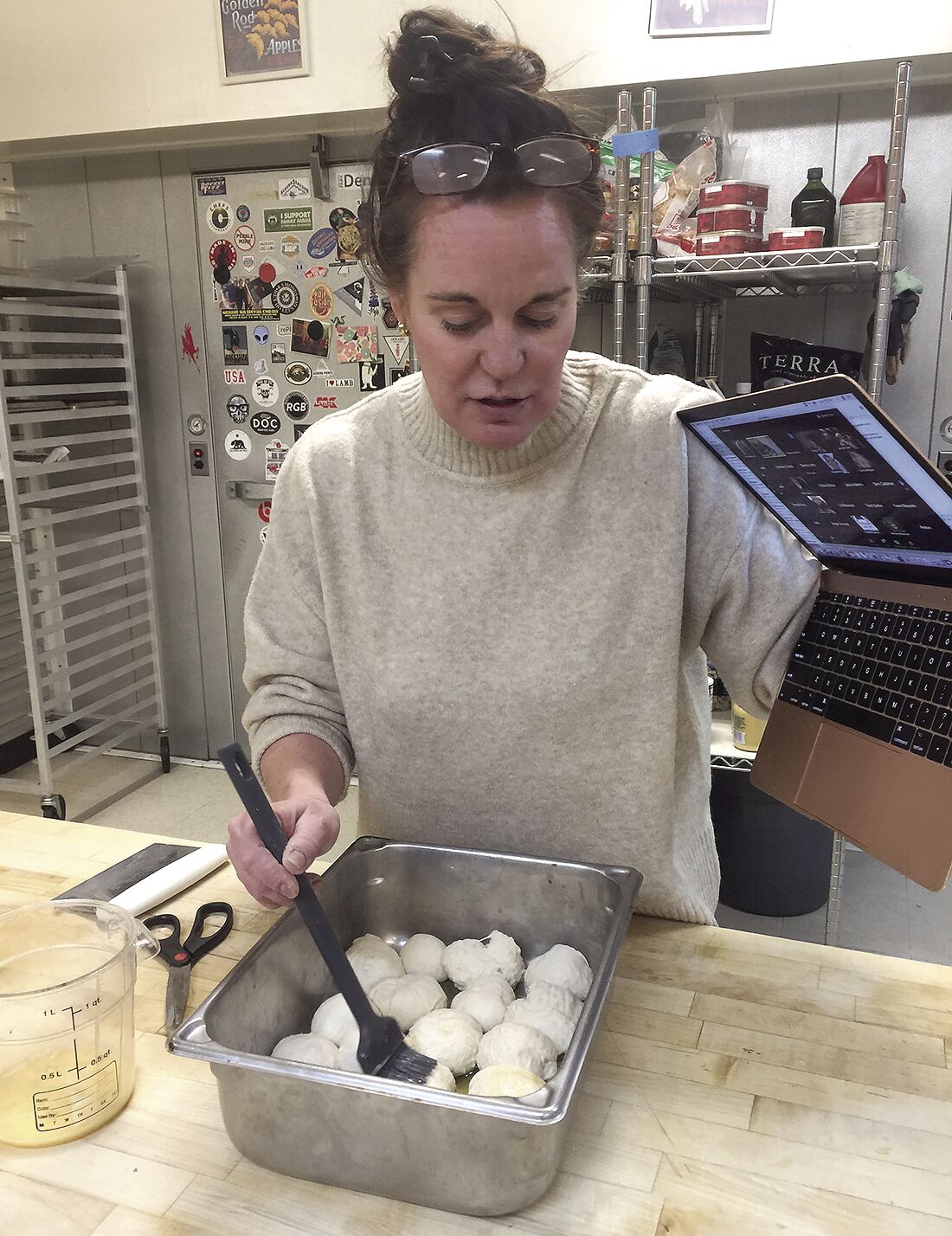 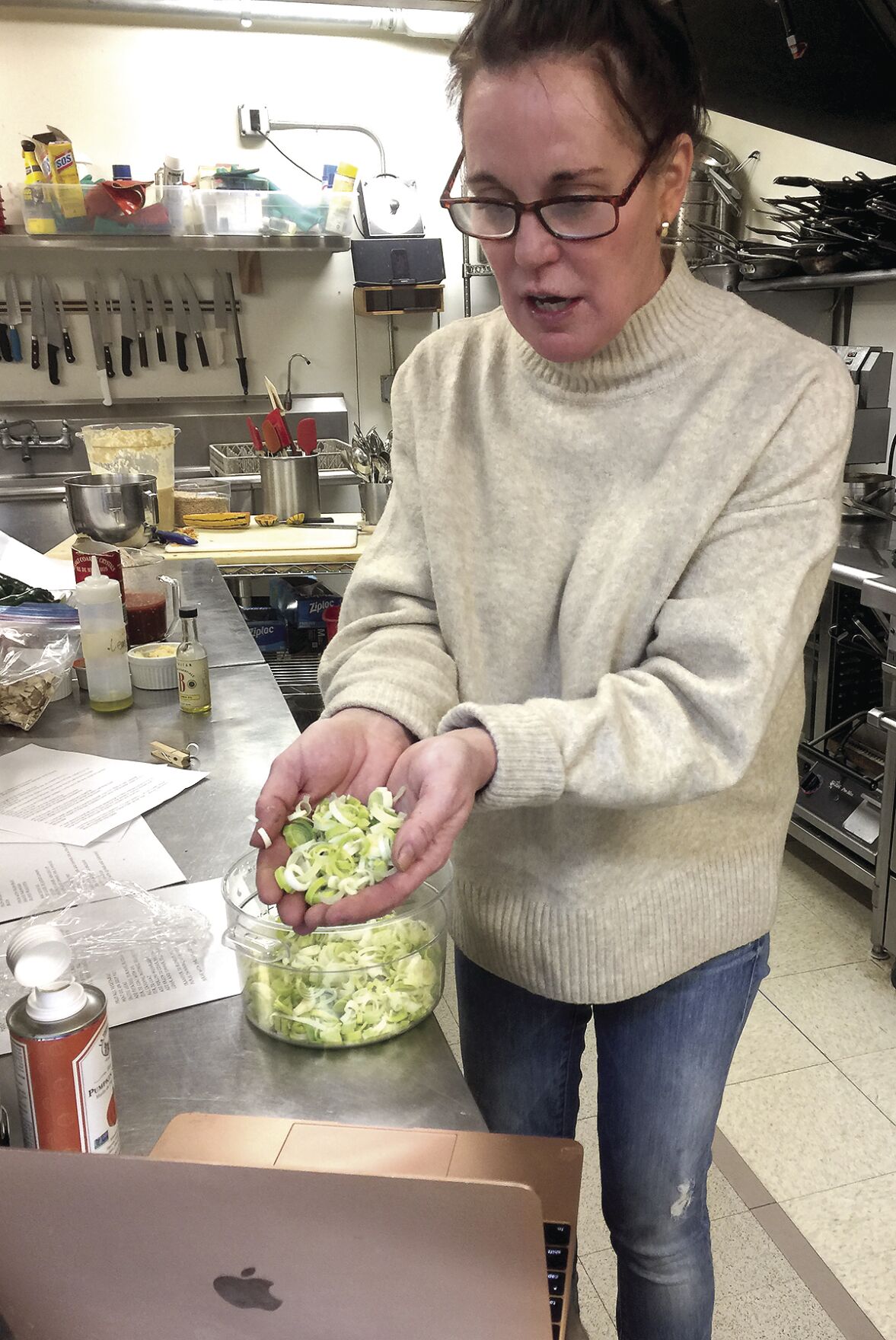 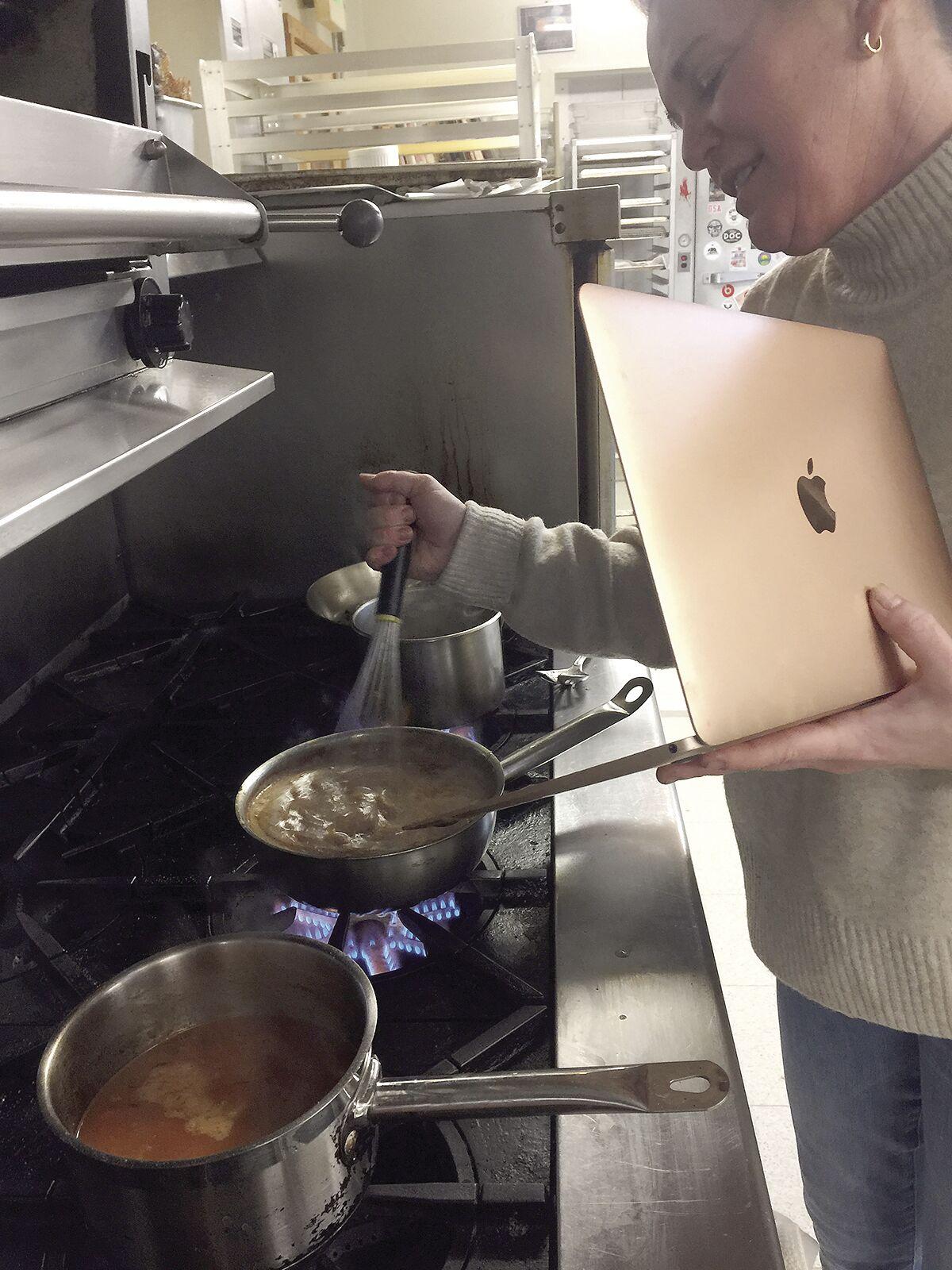 Even an award-winning chef can learn new tricks.

For Laura Cole, who owns/operates 229 Parks Restaurant & Tavern near Denali National Park, that meant creating three delicious soups and two trays of homemade bread while cradling a laptop computer in one arm.

She needed the laptop’s Zoom camera because she was teaching a virtual cooking class for Rotary Club of College in Fairbanks. The class was a fundraiser for the Fairbanks Community Food Bank.

“This class came about because two members of the Rotary Club of College volunteer at the Fairbanks Community Food Bank and recognized a need for more baby formula to meet current needs,” Rotarian Cindy Wentworth said. “We wanted to help. Instead of our usual annual holiday party, we thought it would be fun to have a Zoom cooking class to raise funds to support the Food Bank. We were delighted when Laura Cole of 229 Parks Restaurant & Tavern enthusiastically agreed to contribute her time and resources to this effort.”

Twenty-five people joined the Zoom call, including a few from the East Coast. The two-hour class raised more than $1,000 for the Food Bank.

Teaching via Zoom is not something Chef Cole is totally comfortable doing, but the online audience didn’t know that. Step by step, she brought them along on a culinary journey in her home kitchen, all the time cooking one-handed.

She shared more than just the basic steps of the cooking process. She also provided expert tips on how to get the most out of ingredients and how to best add those ingredients. For example, tearing rosemary leaves off the stem by hand provides more flavor than chopping. Chopped rosemary tends to brown too much, she said.

“The end result is that my hands smell like rosemary the rest of the day,” Cole told her audience.

Although she shared some of her personal recipes she reminded people that menus should be used only as a guideline.

She limits waste by using every part of the ingredients that she can. After scooping seeds out of squash using an ice cream scoop, she roasts the seeds, chops them and uses them as garnish later.

Some of her other personal tips:

• To properly wash leeks, slice them and put them in a bowl of cold water to remove soil or grit. Don’t use a colander, it is not as effective.

• Don’t be afraid to throw out leftover ingredients. “Too many people think, ‘I got it, I need to use it.’ Throw away that salt that is leftover in your hand,” she said.

• Use fresh herbs whenever possible.

• Instead of flour and butter, use olive oil and masa.

• Cole grinds dried mushrooms in a coffee grinder and adds that to some of her soups.

• Don’t hesitate to make substitutions. If quinoa is not available use faro, “one of nature’s greatest grains, a pure protein,” she said.

• Make your own lemon oil by combining a couple drops of lemon and oil in a squeeze bottle. “It infuses so much flavor,” she said.

• When arugula isn’t available use fresh parsley, which is “really good for the digestive system.”

• To make herb butter, use Alaskan sea salt and salted butter. Whip it together with whatever fresh herbs are available — dill, thyme or marjoram, for example.

From the kitchen of 229 Parks

The important thing to remember about making breads is the ratio of yeast to liquid. Standard measurements for rapid rise instant yeast are 1 tablespoon to 3 cups liquid. All of these breads are made with water. You can always substitute or add milk, egg or oil. This will create a heavier, richer bread. Remember to adjust your liquid accordingly.

Bloom yeast in water and honey. Mix in flour and salt until dough is soft and elastic, not too tacky. Let rise until almost double in volume.

Separate into quarters. Roll each quarter in to a long baguette. Slash almost through on a bias. Transfer to olive oil brushed baking trays. Flip every other slash over to form a stalk. Brush with egg was, sprinkle with Maldon sea salt.

Bloom yeast in water and honey. Mix in flour and salt until dough is soft and elastic, not too tacky. Let rise until almost double in volume.

Separate into quarters. Each quarter will make four or more pan breads, size according to your desire.

Roll each piece into a ball and then flatten into a pancake. Roll out to desired thickness. Let rest for a few minutes. Heat grill or pan with olive oil. Brush dough with olive oil if grilling.

Set dough disk in pan or on grill, at high heat, sprinkle with Maldon sea salt. Flip when you have some coloring and bubbling. Cook for a few more minutes, then transfer to plate to cool and continue with remaining dough.

A note on quinoa: This is an ancient grain grown at very high elevations. This grain similar to rice is the most complete protein in the vegetable kingdom, a great grain for a multitude of uses. Always remember to rinse your dried quinoa or make sure to buy pre-rinsed quinoa.

Heat olive oil. Add sliced, de-seeded lemons and quinoa. Cover with broth one knuckle up. Cover and simmer for 15 minutes.

In a separate pot heat oil and carrots. Cover and simmer a few minutes. Add leeks and sauté. Add tomatoes and oregano. Add the broth and heat through. Serve with quinoa and garnishes.

I love this soup for many reasons. It is very healthy, can be made vegan when using vegetable broth, is dairy and gluten free. I always describe it like a hug from the inside. You can add anything you might like to the squash, including avocado, fresh mozzarella, jalapenos and tomatoes.

Heat oil in large soup pot until very hot. Add Masa all at once, stirring into the hot oil and creating a roux. Turn down heat and continue stirring, allowing the Masa to cook for a few minutes. Careful not to burn it.

Slowly start incorporating the broth, stirring and whisking the whole time to avoid lumps. Once half the broth has been added, continue to stir and cook until the first bubble of a boil.

Stir in the salsa and the seasonings. Continue to cook and stir for a few minutes. Add remaining broth until it has reached desired consistency.

Mix the squash, cilantro and poblano peppers together. Place a generous mound in the center of each serving bowls. Gently ladle hot soup into the sides of the bowls.

** I cube, peel and seed the squash. Toss in olive oil, salt, pepper, a bit of sugar in the raw, toasted cumin and chili powder. Roast at 375 degrees until tender.

*** We always toast all our dried seasonings. It helps release some of the oil and enhances the flavor. We just put the spices in a small saute pan over low heat and toast until slightly colored and aromatic.

^^ We make our own salsa. We toss all our ingredients in avocado oil, salt, pepper and bit of sugar in the raw. Then grill for flavor on a very hot grill, then puree in the Vita Mixer.

— Recipes from the kitchen of Laura Cole, owner of 229 Parks, and the College Rotary 2020 Holiday Zoom party