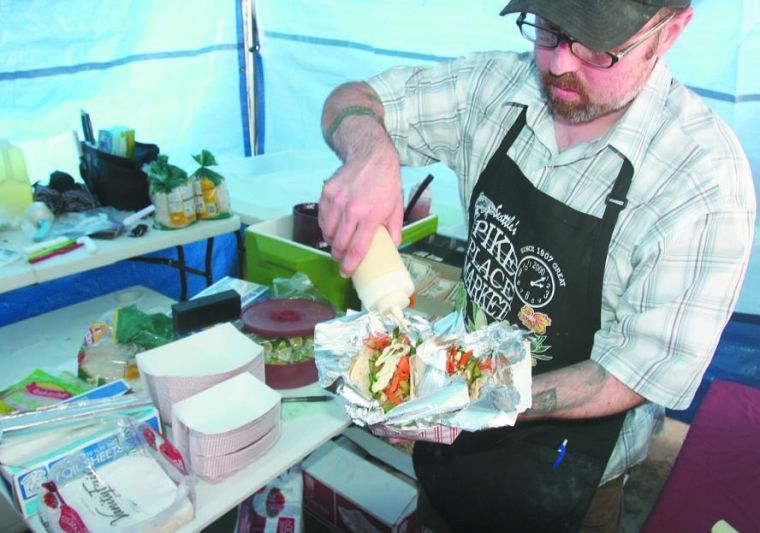 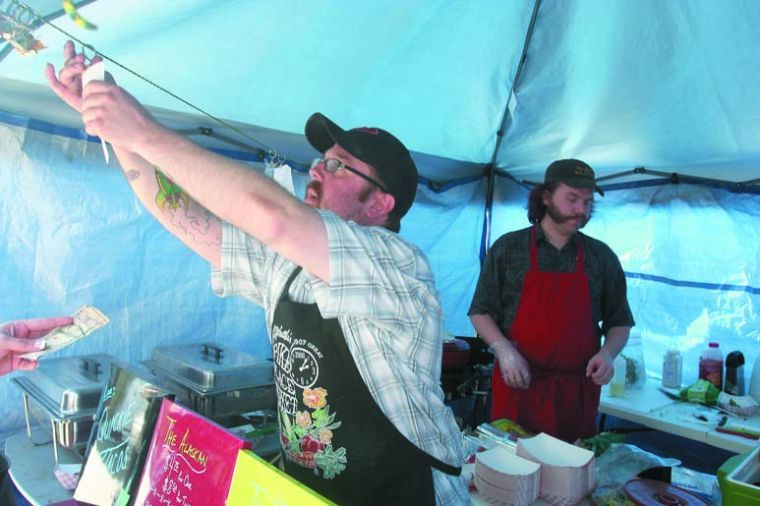 Lane Quick of Lane's Quickie Tacos prepares a customer's order Saturday, June 1, 2013, at the Tanana Valley Farmers Market. At right is Charles Knapton, who helps Quick with the taco preparation. 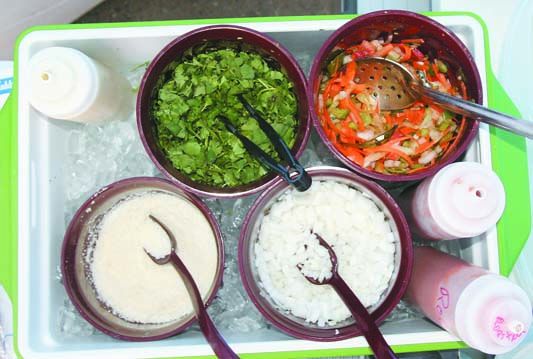 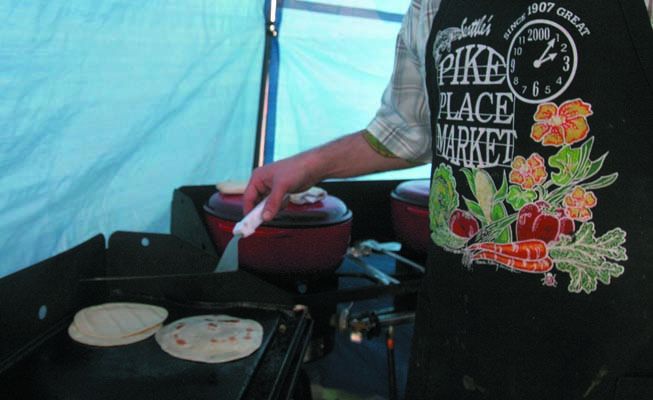 Lane Quick of Lane's Quickie Tacos prepares a customer's order Saturday, June 1, 2013, at the Tanana Valley Farmers Market. At right is Charles Knapton, who helps Quick with the taco preparation.

Editor’s note: This is the first in an occasional summer series on seasonal food establishments in Fairbanks.

FAIRBANKS — Lane Quick has one big reason for making tacos: There wasn’t a taco place in Fairbanks that served the kind of Tex-Mex tacos he grew up with in San Antonio, Texas.

After a winter of experimenting with flavors, recipes and food combinations — and using his co-workers at The Blue Loon as taco-tasting guinea pigs — Quick opened Lane’s Quickie Tacos this summer at the Tanana Valley Farmers Market. So far, it has been a hit with customers waiting in line for one of his three tacos: the Alaskan, the Texan or the Hippie. They’ve all been selling well, so much that Quick pulled in his friends to take orders, chop ingredients on the spot and help prepare the handheld delights.

“I was totally missing that Tex-Mex vibe,” Quick said. “I’ve been here almost four years, and it’s hard to find good Tex-Mex or anything close. It was a really long winter without a good taco.”

“I messed up a lot of pork over the winter until I finally got it right,” he said of his green chili pulled pork.

So far, Quick said, the taco experience has surpassed his expectations, and he’s only been in business for about two weeks.

“I thought the food would speak for itself, and it’s been wonderful so far,” Quick said. “I’ve had people ask me if I have a restaurant or do catering, but I’m like, ‘Let’s just get through this first and then we’ll see.’”

The biggest draw of Lane’s Quickie Tacos is for transplanted residents who miss a good, quick meal from a taco truck. The lure must be great, because during the lunch rush there is usually a line at the taco stand as Quick and company bang out tacos for hungry customers. Since he’s been open at the farmers market, he’s been slammed fairly consistently throughout the day.

“A lot of people have said it’s the best taco they’ve ever had, and I’ve had Army guys from Texas who say, ‘Carne guisada Texas style!,’” Quick said. “It’s been great, beyond expectations.”

• Ease in eating: Fairly easy to eat on the go. These are traditional Tex-Mex tacos served in warmed corn or flour tortillas, which lend themselves to a meal on the run. Since it’s at the Tanana Valley Farmers Market, you can take advantage of the tables if you want to sit with family or friends.

• Taste: All three rate high on the taste factor, though I could use a little more heat on mine. I like a Tex-Mex taco with a little kick. The pulled pork on the Alaskan is juicy and tender, as is the beef in the Texan. The Hippie — the vegetarian taco made of sautéed greens — is a surprise winner and not half as bad as one might think.

• Food type: Three varieties of tacos made fresh and on the spot. Tacos include the Alaskan (a green chili pulled pork); the Texan (a carne guisada); and the Hippie (a ceviche vegetarian taco). Toppings include cheese, onions, cilantro and salsas.

• Twitter: twitter.com/SpreadTacoLove, and you can also search the hashtag #tacolove

Contact Features Editor Gary Black at 459-7504, by email at gblack@newsminer.com or on Twitter at @FDNMfeatures. Have a suggestion for Meals in Minutes? Email Gary and let him know your favorite spot for summer food in Fairbanks.