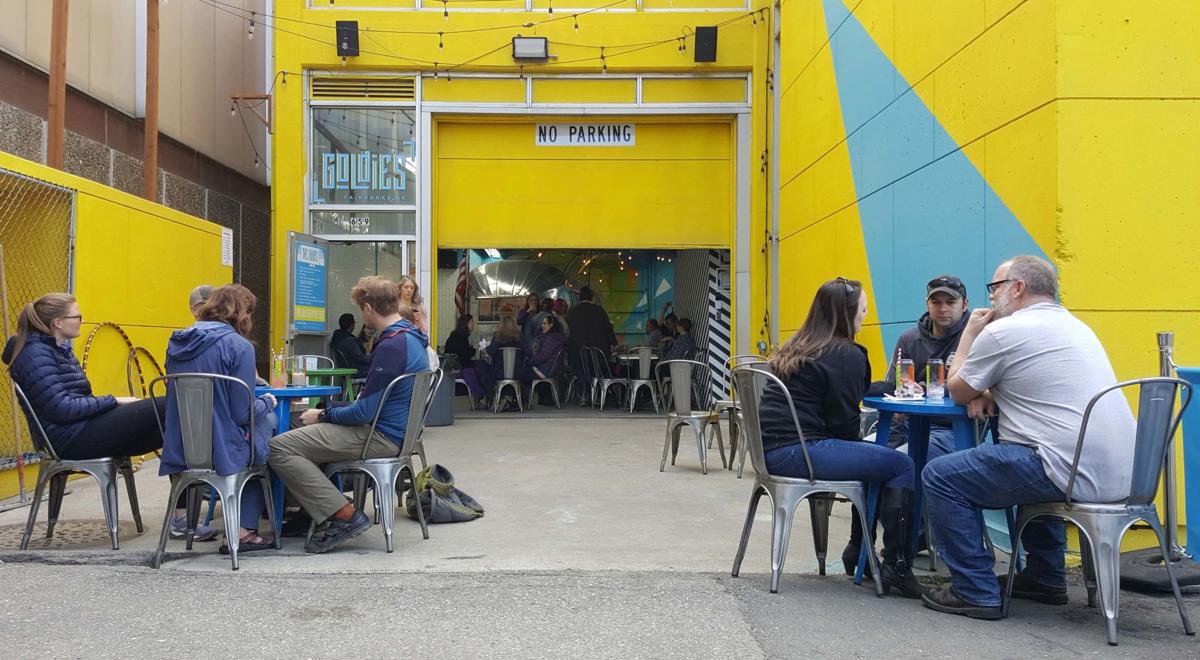 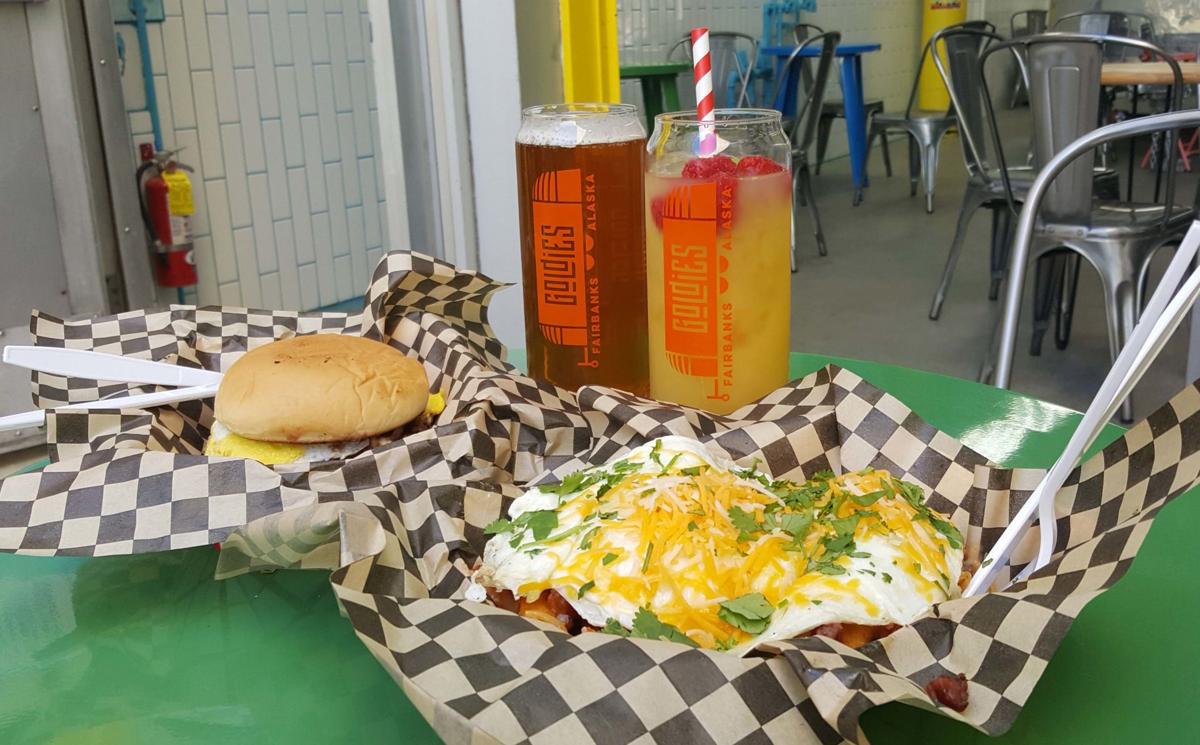 Goldie’s AK has always had a good cocktail game using products from Ursa Major Distilling. Their brunch offerings include local food trucks, such as Between The Buns/One More Bite, which offers a breakfast burger, left, and the Juneau scramble, among other items. 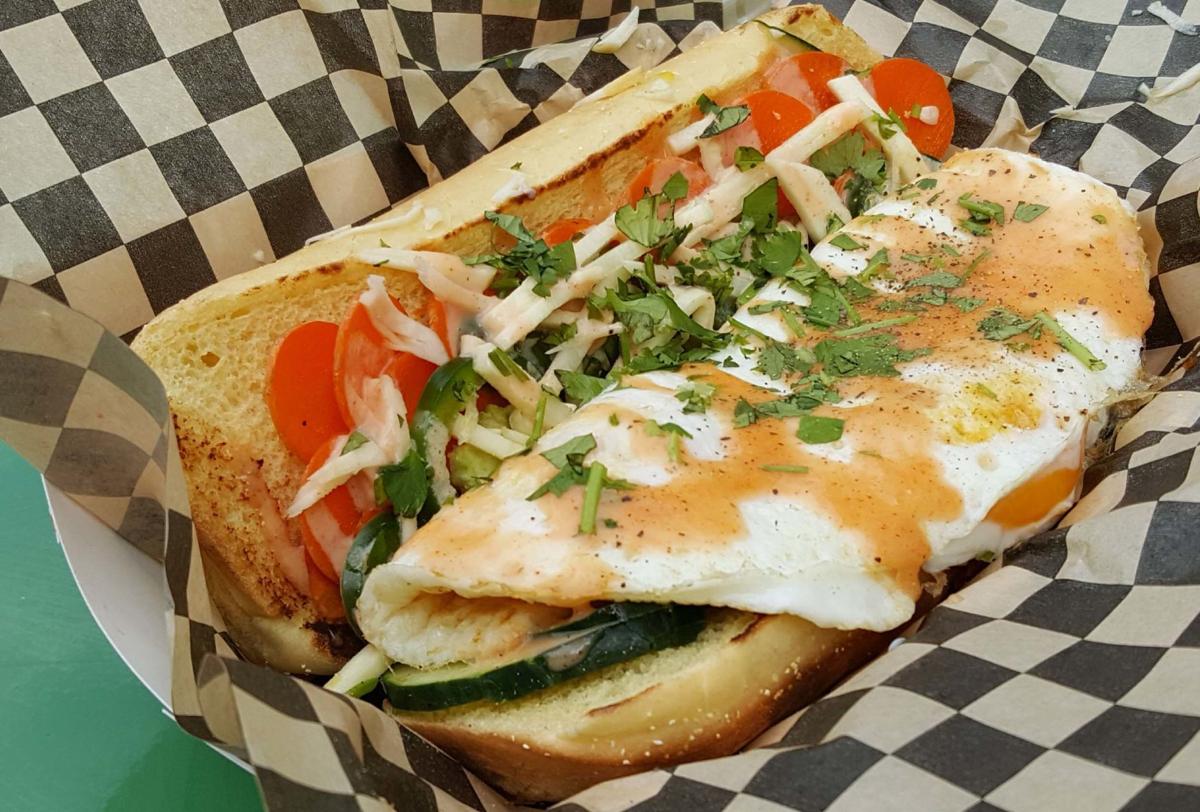 The Breakfast Banh Mi from Between The Buns/One More Bite is two eggs over easy, pickled cucumbers, carrots and jalapeños, Yum Yum sauce and cilantro served on a French roll.

Goldie's AK has always had a good cocktail game using products from Ursa Major Distilling. Their brunch offerings include creative mimosas and a recently introduced coffee cocktail. For non-drinkers, mocktails are readily available.

Goldie’s AK has always had a good cocktail game using products from Ursa Major Distilling. Their brunch offerings include local food trucks, such as Between The Buns/One More Bite, which offers a breakfast burger, left, and the Juneau scramble, among other items.

The Breakfast Banh Mi from Between The Buns/One More Bite is two eggs over easy, pickled cucumbers, carrots and jalapeños, Yum Yum sauce and cilantro served on a French roll.

Goldie's AK has always had a good cocktail game using products from Ursa Major Distilling. Their brunch offerings include creative mimosas and a recently introduced coffee cocktail. For non-drinkers, mocktails are readily available.

The mobile drinkery and hipster hot spot at 659 Fifth Ave. has made a name for itself since it launched Feb. 22. Owned by Kara Nash, Goldie’s dove into the scene by offering creative cocktails and mocktails, hosting community events, and courting performances by local DJs and musicians. Then she added brunch.

Long a friend and fan of Fairbanks’ food truck scene, Nash wanted to host brunches at Goldie’s, and a food truck was the right fit. The first brunch launched in July when she invited Joseph Hardenbrook and his truck, HARD Eats. She even had a theme: Funk & Brunch, with ’70s and ’80s funk music blaring from Goldie’s speakers.

“We are very much brunch people and knew it would be a hit to provide another option where Fairbanks is somewhat limited,” Nash said. “It spoke to our business plan of bringing new ideas to Fairbanks, and we thought played well with our demographic. Our favorite part about it is that the trucks customize the menu for us, which you don’t see often. I think it gets them thinking of new ideas and opportunities for their small business.”

That first month of Funk & Brunch was so well received she extended it, as well as Hardenbrook’s residency, through August.

“We were lucky enough to convince HARD Eats to come on board for Funk & Brunch, and he said his favorite thing to cook is breakfast items. His truck kind of fit the theme,” Nash said.

In September, the theme and truck changed to Boy Bands & Brunch, with Nick Coleman setting up shop. Coleman is the man behind Between The Buns, a creative hot dog venture (the mac and cheese dog with bacon and the pork belly dog are Fairbanks favorites), with which he combined his newest endeavor, One More Bite. One More Bite, like HARD Eats, falls on the more creative side of Fairbanks food truck cuisine.

Hardenbrook offers up items like cheese grits with pork belly and wilted greens, Alaska breakfast sausage corndogs with maple syrup for dipping, and Alaska barley flour sourdough pancakes with Alaska strawberries. Coleman is expanding into fun breakfast territory too, with items like a breakfast bahn mi, eggs Benny over chicken tenders with homemade Hollandaise, or a suped-up fried bologna sandwich with caramelized onions, spicy mustard, Provolone cheese and over-easy eggs. All that, set against the Backstreet Boys, One Direction or 98 Degrees, makes for a hot brunch on a cool September day.

“Both HARD Eats and Goldie’s cater to customers seeking something a little different within the Fairbanks food and beverage market — changing menus and specials highlighting new ways to utilize locally-sourced foods and spirits. New ways of preparing, serving and enjoying a meal all while supporting a plethora of local businesses, farms, breweries, distilleries and stores,” Hardenbrook said. “The longer I’m in business in this community, the more important it is for me to provide my customers with awesome, locally-sourced foods. We call it ‘the best of what’s around.’ The dollar spent locally will recirculate through our community many, many times. There’s no better feeling than being proud of your product, your process and your producers and knowing that it benefits the community you’re a part of.”

For Coleman, the experience has been great, he said, and it’s paid off in that it has allowed Fairbanksans seeking something more creative a chance to experience what’s new and right now in food trucks.

“I’ve followed Goldie’s and all their fun events since they started,” Coleman said. “Kara asked if I’d be interested since HARD Eats was finished with their season, and she knew I’ve done some creative breakfast stuff before, so I jumped on the opportunity to do something outside my normal.”

And for his revolving menu, he seeks inspiration all over, including his past with business partner Trevor Miller, who died in 2017 at the age of 34.

“Since I’ve started the truck One More Bite, my menu has been all over the place,” Coleman said. “Honestly, I always think of what my partner Trevor Miller would do if he was still here with me. My menu comes from my day to day routine, something I’ve seen before and wanted to put a spin on, even a TV show. You always have to put something on your menu you like and would like to see somewhere else. I’m still figuring out who I am as a chef.”

Goldie’s is starting to wrap up its brunch season, with Boy Bands & Brunch and Between The Buns/One More Bite slated for two more Sundays this month. Might it continue throughout the year? Maybe. Maybe not. That, Nash said, depends on what’s out there motivating local food trucks to reach further.

“We have set a standard that I don’t think any old vendor could reach when it comes to menu development,” she said. “We also are working on our expansion project, and until we have more space, it may just be too crammed at Goldie’s.”

Contact Features Editor Gary Black at 459-7504 or at twitter.com/FDNMfeatures using the hashtag #FBXeats.