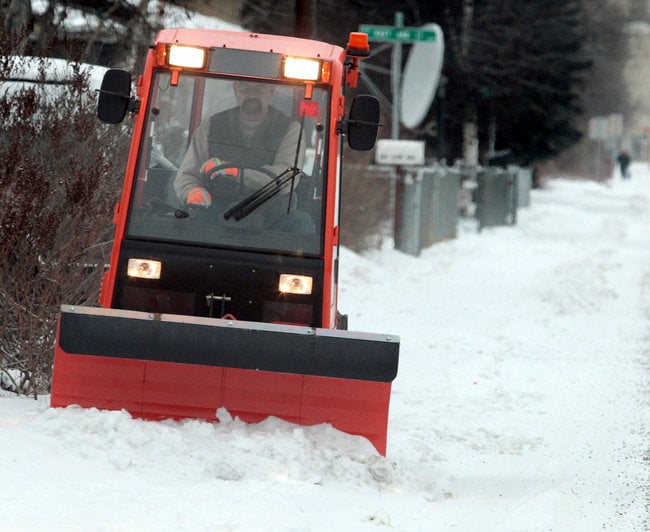 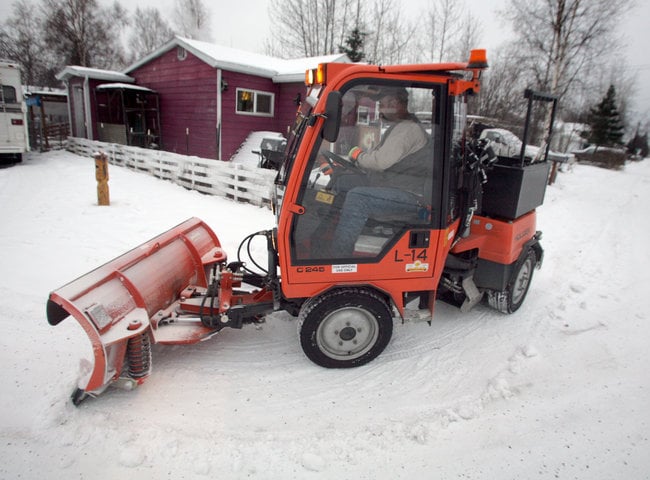 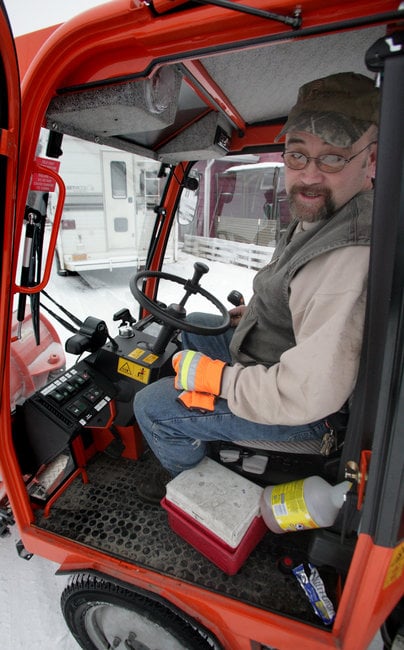 FAIRBANKS — It’s bright orange, can turn on a dime, and it whizzes up and down the sidewalks of Fairbanks at a brisk pace. Steve Carter, the self -titled “snow ninja” who drives the city’s latest addition to its snow removal fleet, said that passersby often point and stare at the big man in the little machine as he goes about his job. It doesn’t bother him, though, because there’s no question that this strange-looking vehicle clears sidewalks better than anything the city has used in the past, he said.

“It’s an articulated machine, which means it pivots in the middle instead of having front steer tires. For plowing it’s better for going around sidewalks and around the corners. It’s about the size of a Bobcat in length, but it’s a lot narrower — it’s made for doing sidewalks,” Grant said.

The Holder, as city workers are calling it, is 42 inches wide and can be fitted with three different attachments — a blade, a snow blower or a broom — to suit a given situation.

“This is our first year with it so we’re still figuring things out. We’ve tried a couple of different combinations. Right now we have a steel blade with a polymer blade together. We found that with just the steel blade, when you have any joints in the curb it just tends to bounce over. The polymer blade worked really well — it’s a little more forgiving and tends to bounce better, but it wears down fast so we put the steel blade behind it,” Grant said.

A utility box mounted on the back holds shovels, clippers and other tools. In the summer, a water tank can be mounted in it’s place and dusty sidewalks can be sprayed. The broom attachment sweeps gravel and other debris left over from the winter.

The city purchased the vehicle for $95,000, according to Rich Dunham, vice president and branch manager of Craig Taylor Equipment.

“If you’re trying to compare a Holder articulated tractor to a skid-steer, it’s apples to oranges — they are two different pieces of equipment. Granted, they both can do a similar type job, but one advantage to the Holder is the fact that it’s narrow and it will articulate. There’s a safety factor with that because you’re not necessarily having to back up to do multiple turns. And because of the width of it, it’s designed to stay on the sidewalk rather than driving off of it. It’s a pretty specialized piece of equipment and it’s actually a pretty neat piece of equipment,” Dunham said.

Dunham said he worked with the manufacturer to fly two city employees, a mechanic and an operator, to the Holder factory in Ottowa, Canada so they could test-drive the vehicle and see how it was made.

“That’s like a whole new planet,” he remembers now. “Here we go from an elbow injury possibly to something growing inside your cord. That scared the crap out of me.”