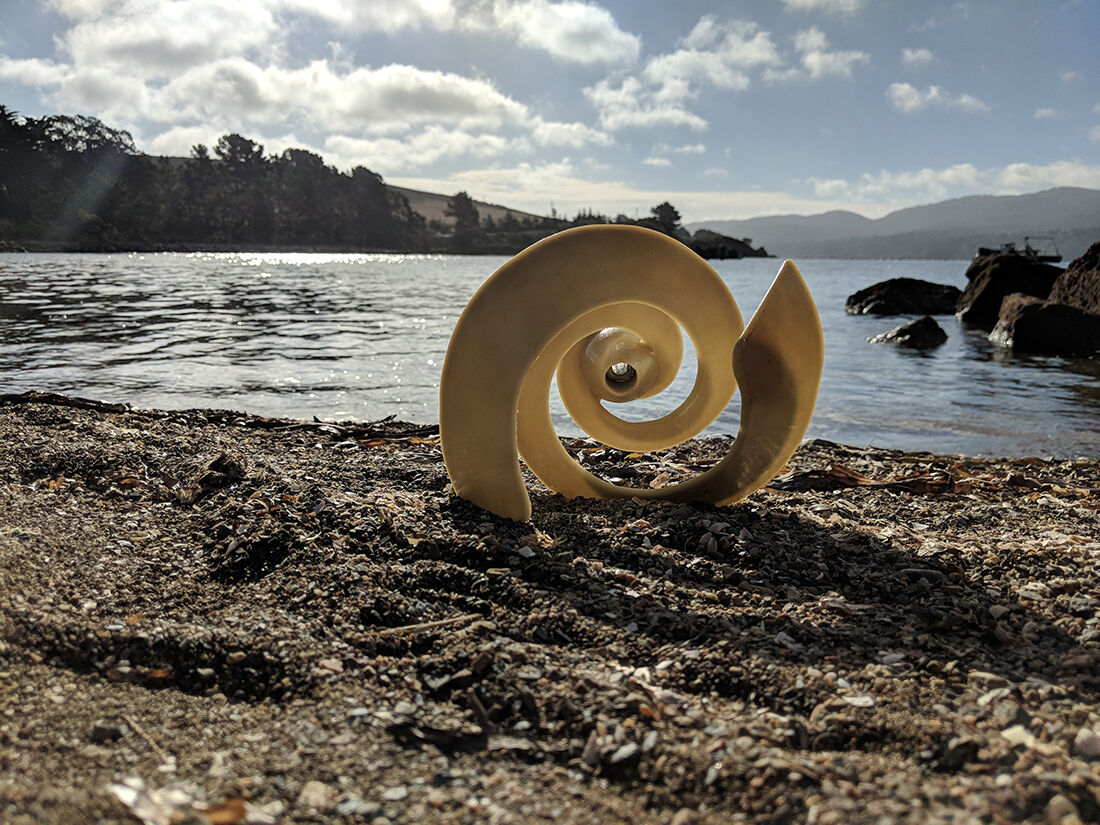 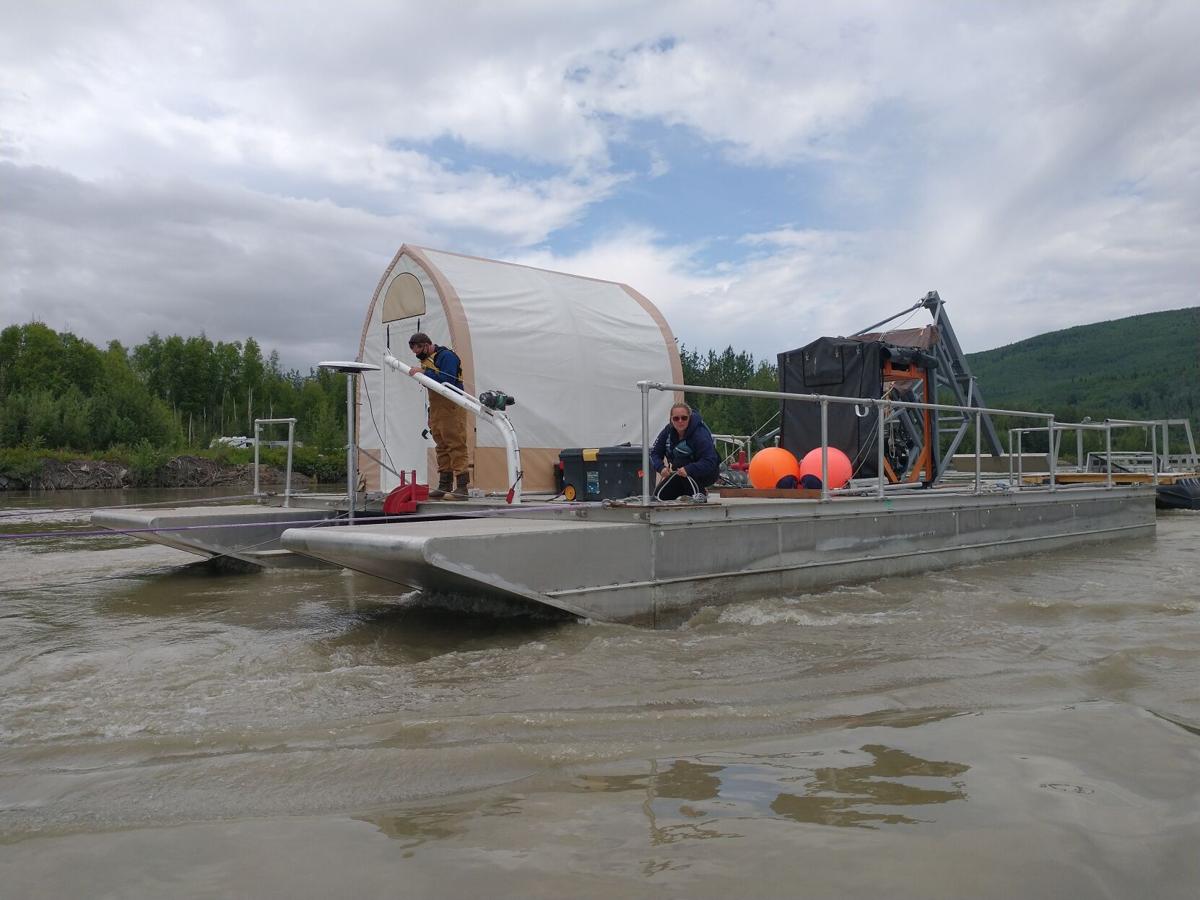 A view of the floating test station at the Tanana River Test Site near Nenana in 2020.

A view of the floating test station at the Tanana River Test Site near Nenana in 2020.

Energy is one of Alaska’s best-known resources, but one big source remains relatively untapped: the energy in its rivers and ocean tides.

Alaska has about 40% of the total river energy, 90% of total tidal energy and 60% of the total wave energy in the United States. For the past decade the Alaska Center for Energy and Power at the University of Alaska Fairbanks has been investigating ways to develop this source of clean, renewable energy.

It has developed and tested numerous hydrokinetic technologies with the goal of providing Alaskans with affordable and environmentally sustainable energy. In late November, ACEP received $3.3 million from the Department of Energy to help develop a novel hydrokinetic technology. Think of it like a wind turbine, only it generates energy from water currents instead of air currents.

Dr. Mario Garcia-Sanz, program director at the Advanced Research Projects Agency-Energy, said the award is one of 11 projects for a total of $35 million awarded under the Submarine Hydrokinetic And Riverine Kilo-megawatt Systems (SHARKS) program, which Kevin Fitzmaurice at ARPA-E described as promoting “super early stage cutting edge, outside of the box design.”

The UAF project will advance turbine technology from BladeRunner Energy and generator technology from C-Motive Technologies, with the goal of creating a system that could provide power for remote communities in Alaska. Ben Loeffler, research manager at ACEP, said the project takes advantage of the decade of experience ACEP has in testing hydrokinetic devices but with an important difference.

“We do have technology developers come up and just want to field test for a short period of time and then take the results and go back to the drawing board,” Loeffler said. “This project is fundamentally different. It’s a collaboration between ACEP — UAF — and two small business technology developers. It’s a three-year program to develop and integrate their technology together in the context of a real-world testing environment that ACEP can provide with the Tanana River test site.”

The funding also will allow ACEP to bring in leaders from communities where the technology could be implemented so they can provide feedback on what it would take for the devices to be successful in the real world, Loeffler said.

Garcia-Sanz said the project will look at four options with the goal of developing a device that work in rivers and in tidal areas both on and off the grid.

The BladeRunner device is small and can be deployed in a river by a boat. The current spins the custom-designed turbine, which is attached by cable to an electrical generator capable of generating from 12 kilowatts up to 50 kilowatts.

“It is very simple to do this type of installation,” Garcia-Sanz said. “This is particularly important in Alaska when you have ice melting in the springtime, or some debris and you have to move the system quickly, you can put the cable in the boat quickly and the rotor and then you move the boat.”

Garcia-Sanz said studies in Alaska and elsewhere will be looking at how well the system works in areas with slow currents and with devices that have blades and others that don’t. Some devices may look more like hydrofoils, others like kites. “It’s really a very diverse and very rich portfolio, and we’re looking forward to seeing how far we can go with all these different technologies,” he said.

The goal, however, is a system that’s easily accessible to the market.

“We want all the performers to be successful in the market in three years time,” Garcia-Sanz said. “This is important. It’s something very unique and promising and respectful for the communities.”

The BladeRunner Energy technology will be tested at ACEP’s site in Nenana and its Power Systems Integration Lab in Fairbanks. Loeffler said the rotor has been tested on a small scale in Oregon, and testing it on the Tanana River will give a better idea of how it would actually work at an Alaska village site on the Yukon or Kuskokwim rivers.

One issue is that the turbine operates at a very low speed, which isn’t compatible with normal electric generators, Loeffler said.

“So another partner on the project is called C-Motive Technologies, and they’re in Madison, Wisconsin. They have a novel electrostatic generator, which is efficient at low RPM, so it’s a good fit with the BladeRunner low RPM turbine,” he said. “This project aims to bring those together and then demonstrate them in the Tanana River.”

The generator and turbine are connected by a flexible tether, with the generator floating atop the water, so it avoids issues with silt and debris, as well as migrating salmon, which tend to hang out deeper in the water.

“So in theory it’s a lot more debris resilient and better suited for the harsh river environments,” Loeffler said. “Basically it’s a floating system that hangs off a single mooring line. Structurally, there’s not a lot of material, so it’s pretty cost-effective, and it should be relatively easy to deploy and retrieve. Some of the other systems are either on their own floating platforms or need to be anchored to the bottom. There’s a lot of cost involved in building those structures and getting them in and out of the water.”

At this stage, the hydrokinetic systems aren’t intended to replace village energy systems but to supplement them in the same way wind and solar systems have been implemented, initially offsetting diesel use, he said.

“With this project, you’re just focusing on demonstrating, developing and proving the turbine itself,” he said. “There’s no real focus yet on the next step, which would be sort of the full integration and require setting up a whole lot of other things like batteries.”

The ARPA-E program ties in well with other work Loeffler and his colleagues have been doing at the Tanana River test site near Nenana, such as characterizing river debris, studying fish and measuring water flow in the winter.

In 2020, the team tested a novel approach that uses an oscillating system called a water horse instead of a rotating system. “We’ll be doing more development and testing on that over the course of the next year.”