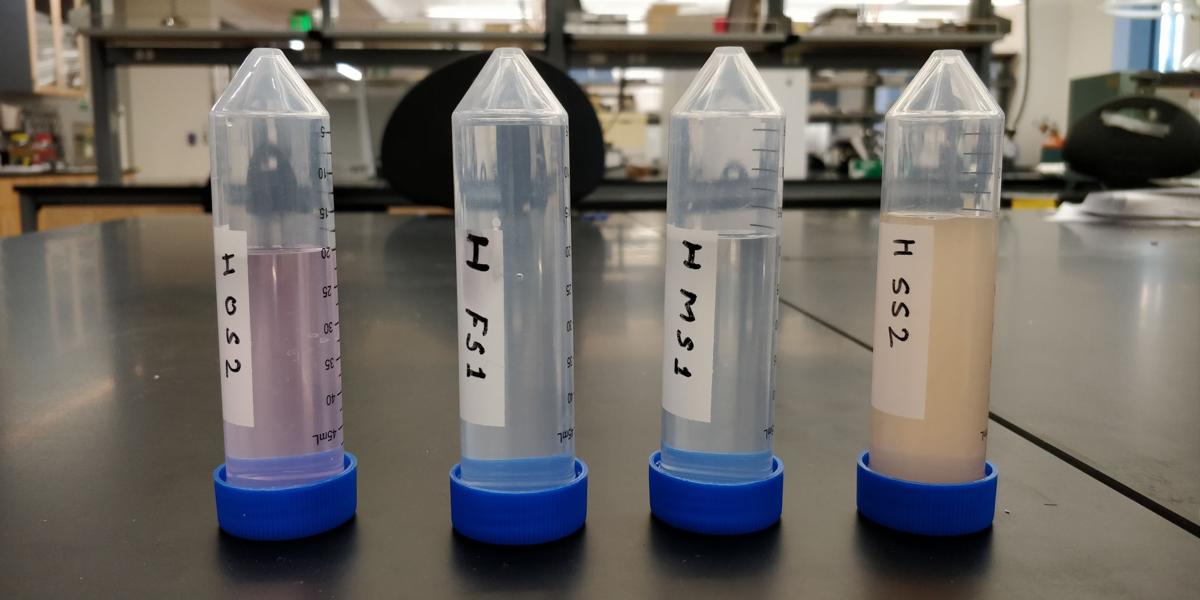 Sealed bottles containing liquid used in bio-leaching experiments at UAF are lined up to be sent out for testing. 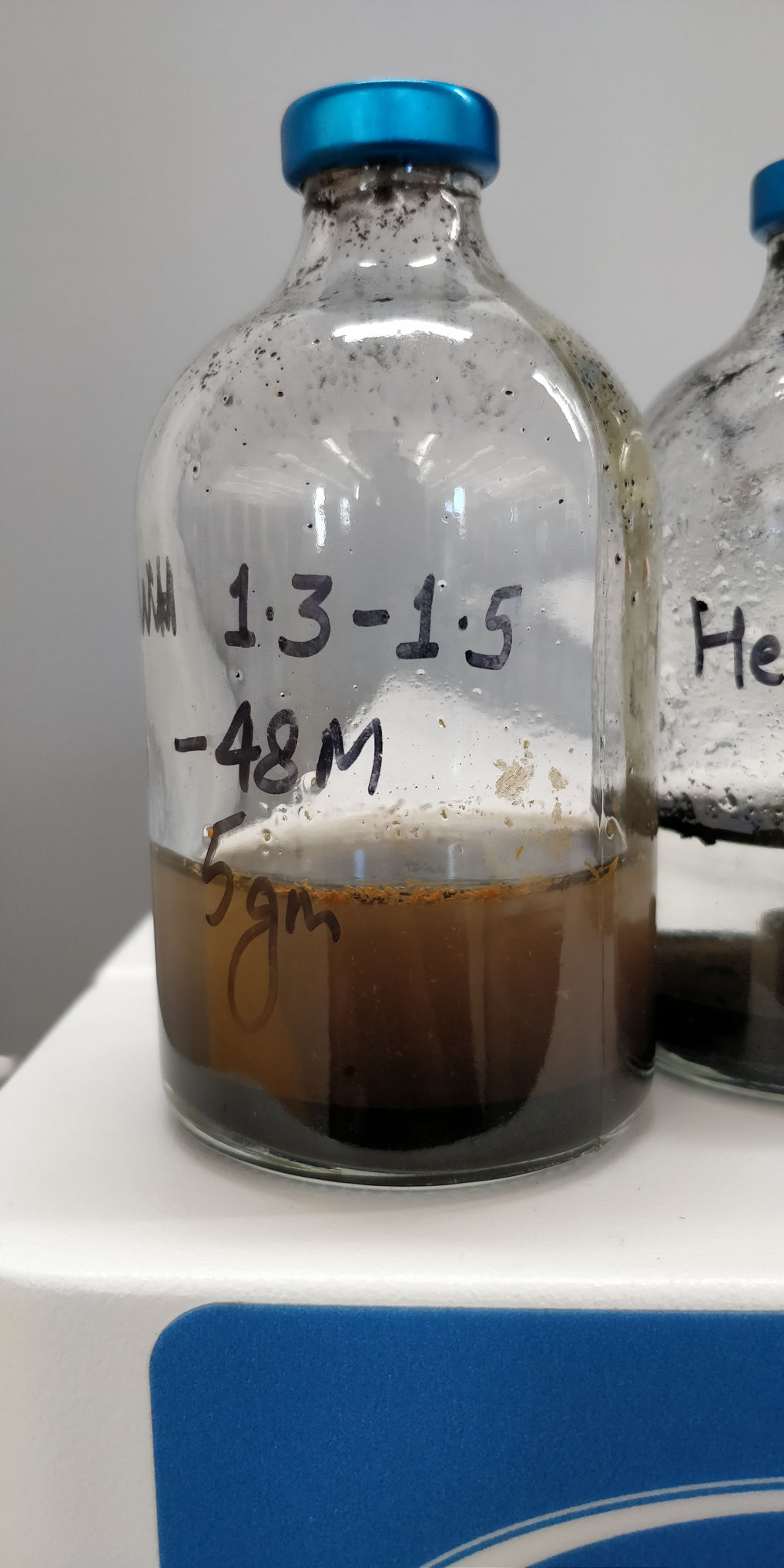 A sealed bottle containing coal and bacteria used to conduct a bio-leaching experiment earlier this year. According to researcher Ankur Sachan, the brown floating material is iron attached to rare earth elements. 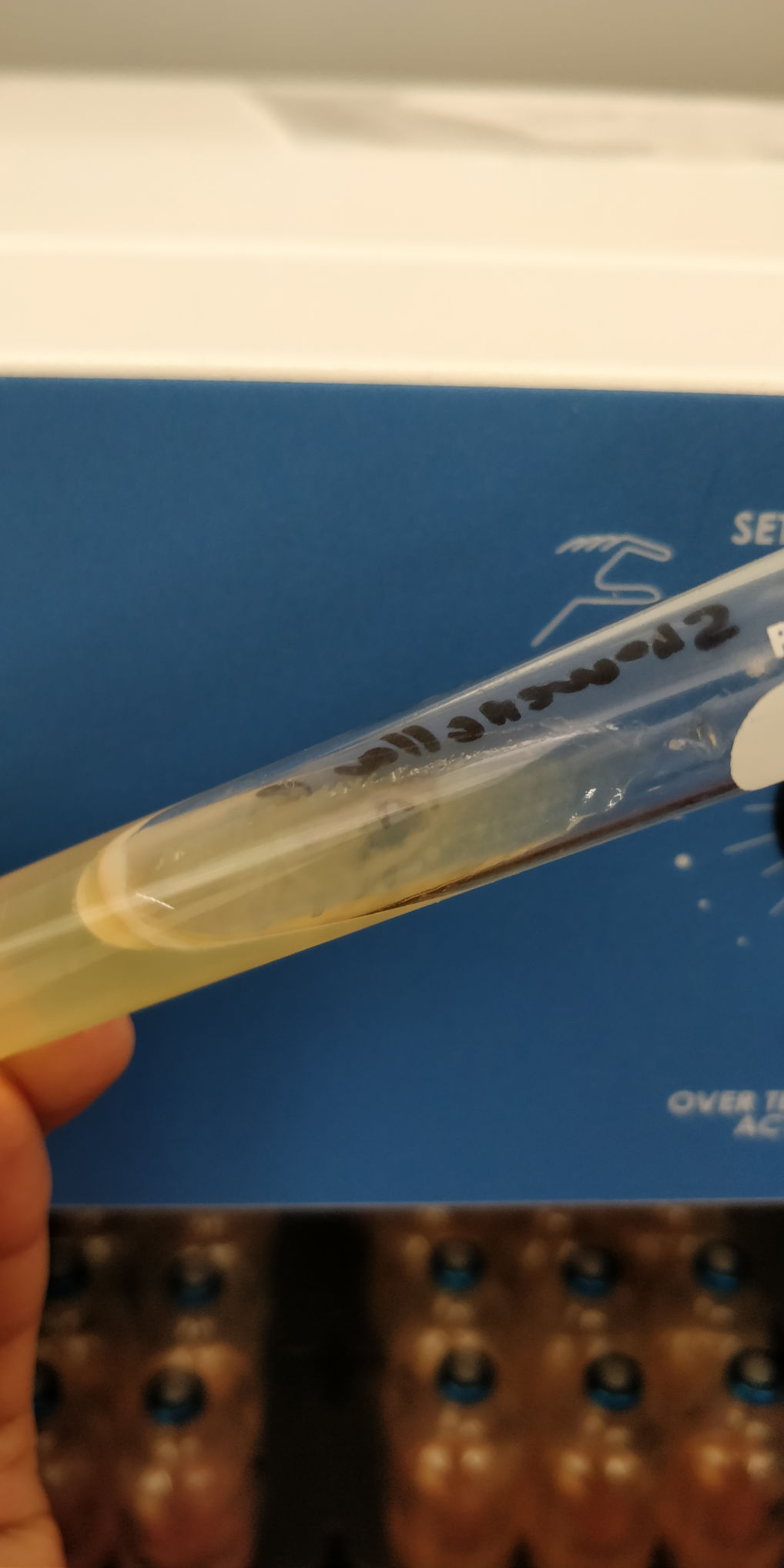 A vial containing the bacteria used to conduct bio-leaching research conducted at UAF earlier this year is held by a researcher.

Sealed bottles containing liquid used in bio-leaching experiments at UAF are lined up to be sent out for testing.

A sealed bottle containing coal and bacteria used to conduct a bio-leaching experiment earlier this year. According to researcher Ankur Sachan, the brown floating material is iron attached to rare earth elements.

A vial containing the bacteria used to conduct bio-leaching research conducted at UAF earlier this year is held by a researcher.

In a field known for big equipment and measurement in tons, mining’s newest employees could be tiny bacteria who will do the hard work of extracting rare earth elements from coal.

Researchers at the University of Alaska worked to pioneer this process, which has only been done previously on clay, earlier this year, and hope to expand their efforts soon.

Briggs’ background is in oceanography and his research has involved microbial ecology and biotechnology. Ghosh’s background is in mining engineering. Sachan said the combination of the two was invaluable: Ghosh knew little of microbes, and Briggs knew little about mining. Between the two of them, they were able to direct Sachan in the uncharted territory of his research.

There are 17 “rare earth” elements, including 15 lanthanides, plus scandium and yttrium.

Rare earths are used in cellphones, electric cars, televisions, computer hard drives and in defense applications. Very small amounts of the elements are required to make these devices function, but that little bit is critical.

About 80% of the rare earth elements used in the U.S. come from China, and that country holds about 37% of the world’s reserves. A small amount of rare earths are also extracted at a single mine in California. As ongoing trade tensions between the U.S. and China have increased, the federal government has striven to gain independence in rare earth sourcing.

This was how, in 2015, Ghosh was able to use research funds from the Department of Energy to begin experimenting on Alaska coal. He learned that not only were there rare earth elements in the coal but also, counterintuitively, that low-density coal, which has a lower amount of other minerals, has a higher concentration of rare earths.

Those experiments were the groundwork for Sachan’s thesis. He sought to explore whether bacteria could be used to extract rare earth elements coal samples from the Usibelli and Wishbone Hill Mines in Healy, both owned by the Usibelli Coal Mine company.

Working with microbes was somewhat stressful for Sachan, who’d never even taken microbiology class prior to conducting his research. He described a painstaking approach to contamination and worries that his bacteria might die.

Further, though bio-leaching has been done at a couple of universities in the southern U.S., there was an extremely limited amount of research for Sachan to lean on.

“At first, I was like, OK, I am in uncharted territory, but you get support from your mentors,” he said.

Ghosh and Briggs pushed him to look at research from as far back as the 1930s and to explore all the ways bacteria have been used. Sachan chose to take samples of Alaska coal and test it using several types of bacteria and a “re-ox reaction.”

Sachan took pieces of Alaska coal and put them in test bottles, along with a solution that contained bacteria and carbon. The bottles were sealed. The bacteria used the oxygen in the bottles over the course of five to seven days. When there was no more oxygen left, rather than dying, the bacteria switched to “breathing” iron instead. The expansion and contraction of the iron is similar to what happens in a freeze-thaw cycle, according to Briggs.

The researchers then injected more oxygen into the bottles, creating what’s called a “re-ox reaction.” The reaction caused the iron in the bottles to swell and then shrink. The researchers repeated the process several times, allowing the bacteria to repeatedly consume the oxygen and iron.

When the re-ox cycles were finished, Sachan took the material and sent it away to be analyzed. The results concluded that at the end of the process, there was purified coal and a solution containing iron bound to rare earth elements. The bacteria had freed the rare earths from the coal.

For Sachan, the victory of learning about the experiment’s success was short-lived. He had to verify and analyze all the data and continue working to finish his thesis.

Briggs had a much clearer reaction. “Getting those very first results, when we’ve been trying to do this for four or five years now? That was amazing. You work so hard, and you finally see that it’s working. It’s one of the greatest feelings. That’s why I do science,” he said.

The project culminated in a private moment of awe for Sachan. After defending his thesis, he returned to his office, and, he says, just sat there for 10 to 15 minutes. “I was like, this is done. I did it,” Sachan said. He said he felt a sense of completion for having done something no one else has done.

While this process is in its infancy, Sachan, Ghosh and Briggs hope it will lead to a better future. Ghosh pointed out that because the process involves bacteria, and few chemicals, it is relatively green. Further, because the process removes impurities that cause ash, the coal treated with bio-leaching would theoretically burn more cleanly.

If the process can be scaled up in an economically feasible way, the United States could reduce its dependence on foreign rare earths and add a more environmentally friendly process to an industry sometimes at odds with that goal.

Sachan hopes that his experiment is just the beginning for bio-leaching. “Maybe what I did will lead to lots of future research for a lot of different people and might help us all. Not just Alaskans, not just Americans. It might help everyone around the world,” Sachan said.

In the much nearer future, the team is working to submit its work to scientific journals, to create patents for the process and to raise funding to test the process on a larger scale.