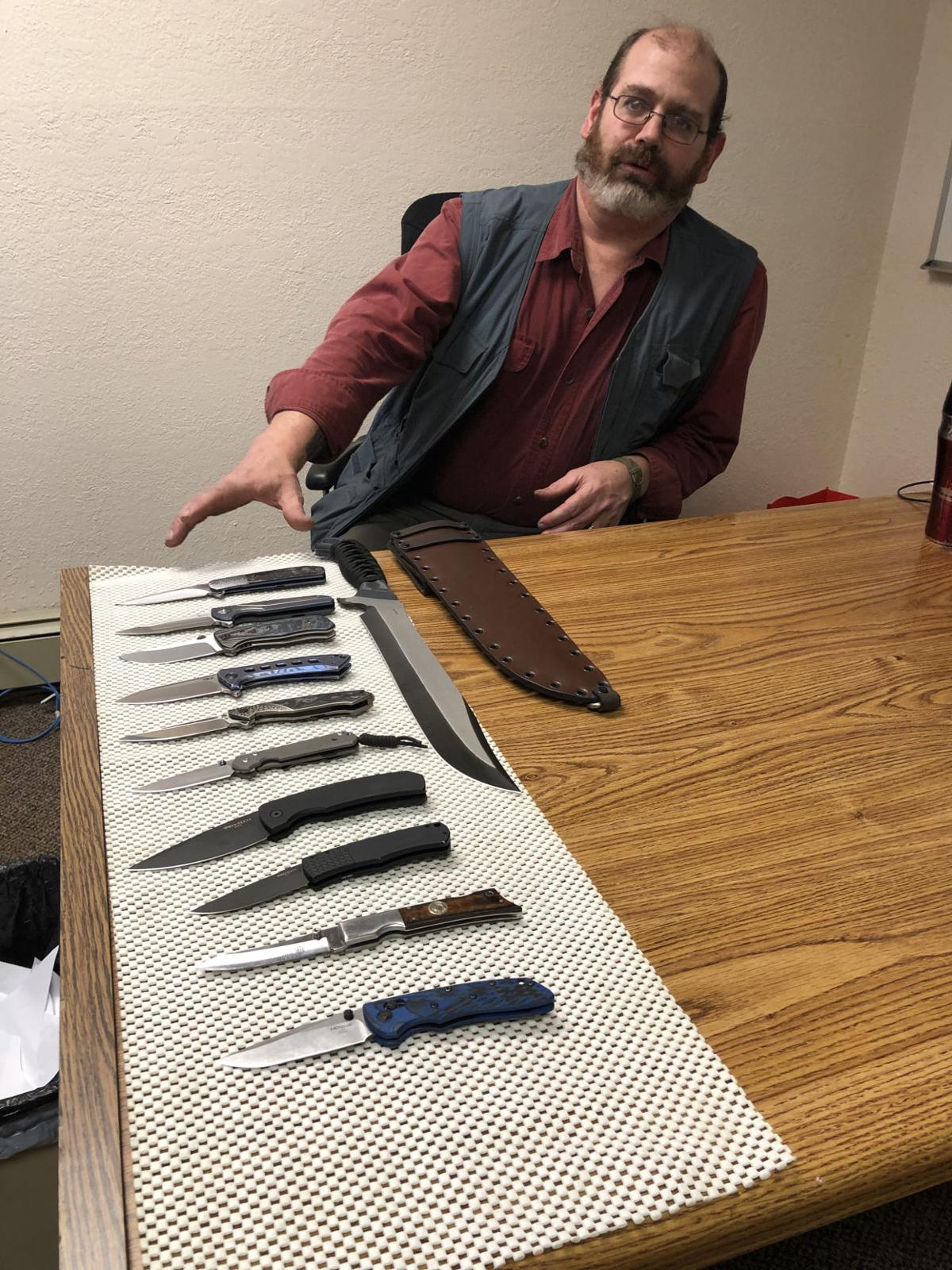 Tom Dimon shows off his personal collection of knives in his knife shop, Tamarack Knives. 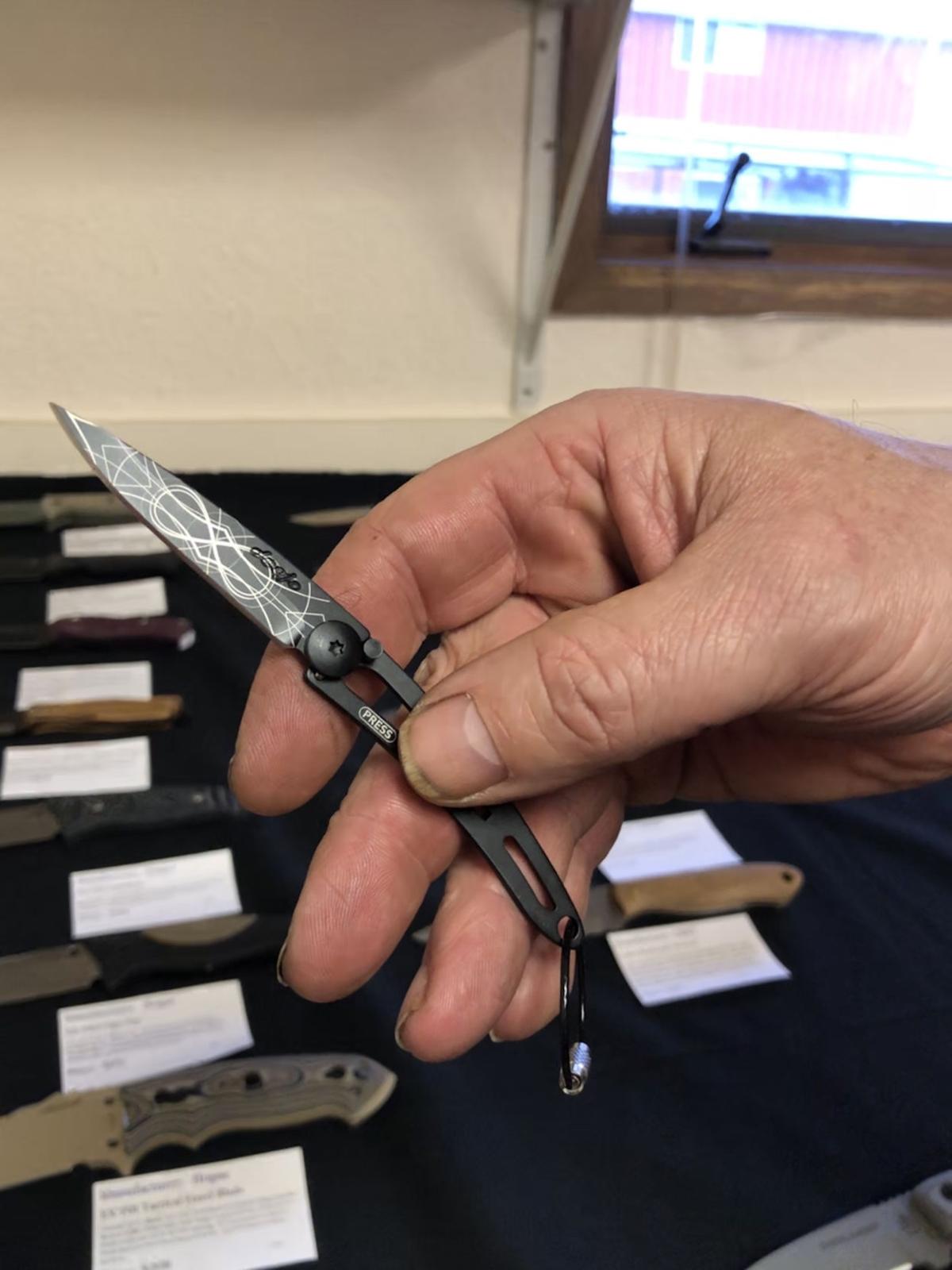 Tom Dimon shows off a small knife in his knife shop, Tamarack Knives. 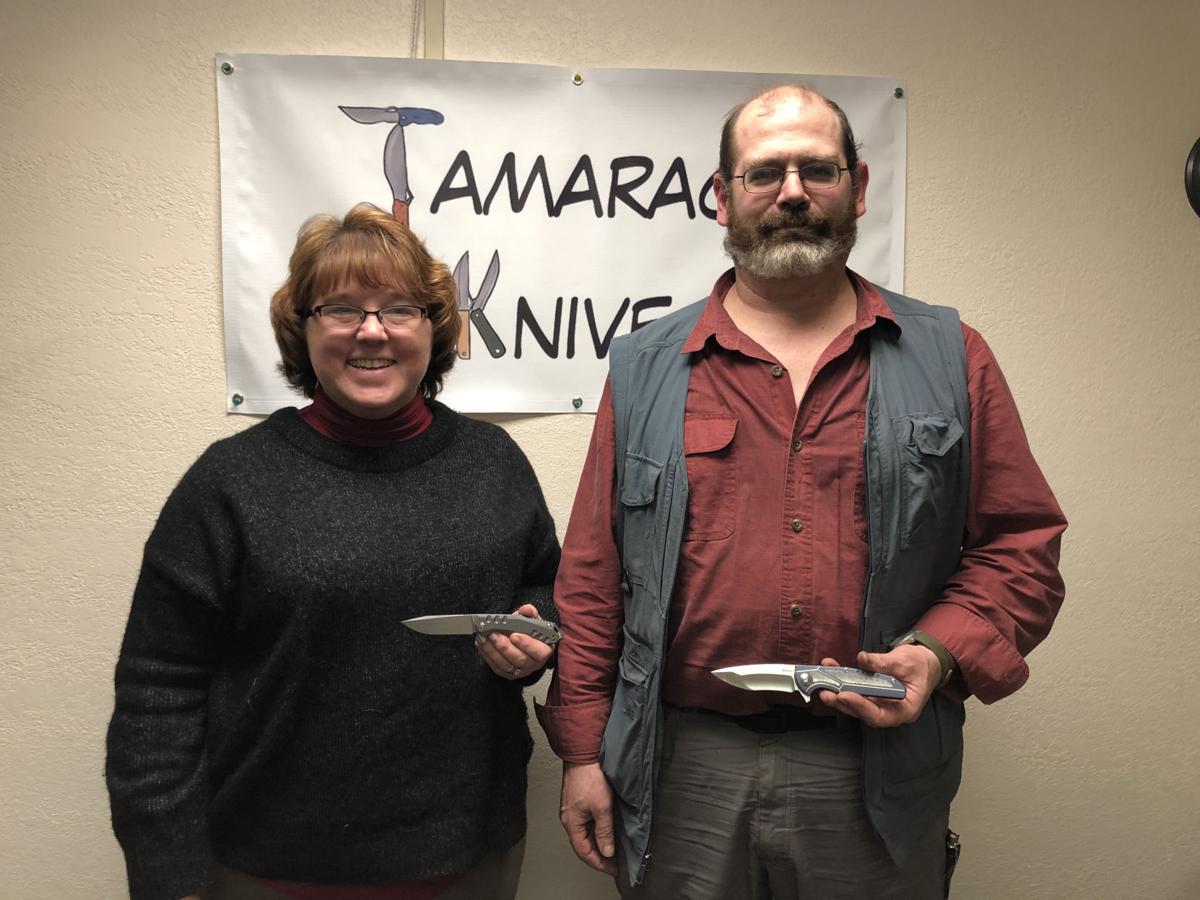 Cathy Dimon, left, and Tom Dimon show off some of their wares in the knife shop they co-own, Tamarack Knives.

Tom Dimon shows off his personal collection of knives in his knife shop, Tamarack Knives.

Tom Dimon shows off a small knife in his knife shop, Tamarack Knives.

Cathy Dimon, left, and Tom Dimon show off some of their wares in the knife shop they co-own, Tamarack Knives.

Hoping to take a slice of the local market, Tamarack Knives quietly opened earlier this year, providing a wide selection of knives of every sort.

Tamarack Knives co-owner Tom Dimon noticed that while stores in Fairbanks sell knives, there are none that carry them exclusively or have the variety he wanted. He got sick of looking for his knives out of town.

“You can get stuff online. You can do that with anything nowadays, but there’s a lot of difference between being able to hold it, feel it, see exactly how it feels,” Tom said.

He saw the opening in the market and had a little extra time this year and as he said, “the stars aligned.” He applied for a business license in April with his wife, Cathy, and the two set up in a back room at Northern Business Systems, another business they co-own.

The business is primarily run by Tom, but Cathy and the other employees at Northern Business Systems are happy to check customers out when Tom isn’t available.

More than anything, Tamarack Knives is an extension of Tom’s passion: he’s a guy who just likes knives. Having grown up in upstate New York, the tools were a constant in his childhood in the North Country. He can’t remember when he got his first knife — he just always had one in his pockets.

In the past few years, Tom’s interest in knives has grown along with his collection. He doesn’t know exactly how many knives he has, but estimates it’s between 30 and 50.

Tom shares his interest with his wife, Cathy. At first, she said, she tried a few new knives in the kitchen, but now she said she’s become something of a “knife snob.” She said that Tom is great at educating others about knife steel and the different uses for knives. She most enjoys the fixed blade knives.

Tamarack Knives sells a variety of knives, at several different price points, for a variety of purposes. The blades are anywhere from 2 inches to nearly a foot long. There is a large collection of fixed blade and pocket knives which open in several different ways. They range in price from $20 to $524. The fixed blade knives are suitable for use in hunting, fishing and other wilderness uses. There are even a couple of knives suitable for the kitchen.

Finding good products that aren’t available anywhere else in town in important to Tom. He explained that a quality knife, though expensive, would retain its edge better and last longer.

The couple came to Fairbanks in the 1990s. Tom was in the Airforce. After several years, he was given the choice to leave Fairbanks or leave the military and Tom chose to stay put. His first job was doing copier repair, work he continues to this day.

The Dimons are ramping up their business slowly, using word of mouth and attending gun shows to promote Tamarack Knives. They hope to one day have a freestanding shop.