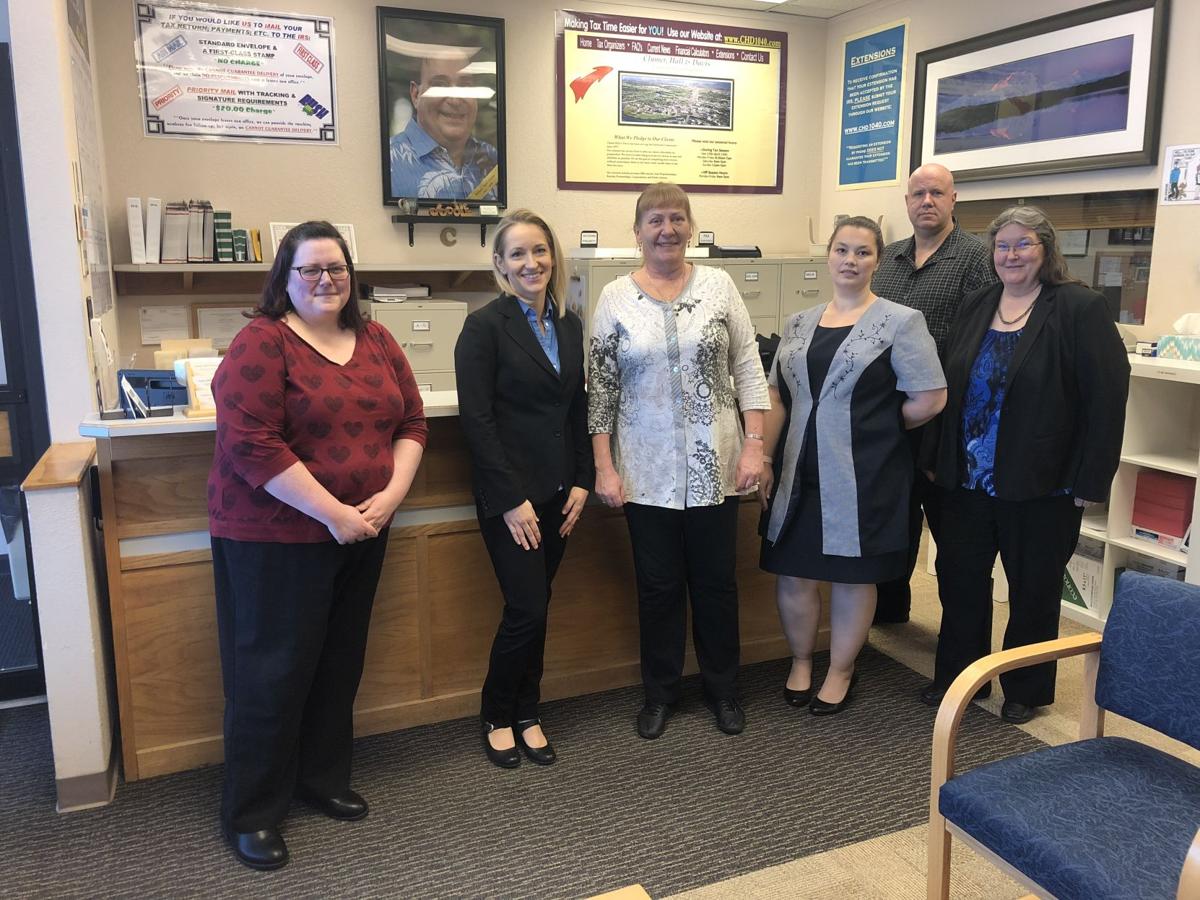 Stephanie Clymer, center, stands with the staff of Clymer, Hall & Davis in the tax preparation company’s lobby. Clymer inherited the business from her husband, Richard Clymer, who was one of the co-founders. The office has been based in this suite of Washington Plaza Mall since the 1990s. 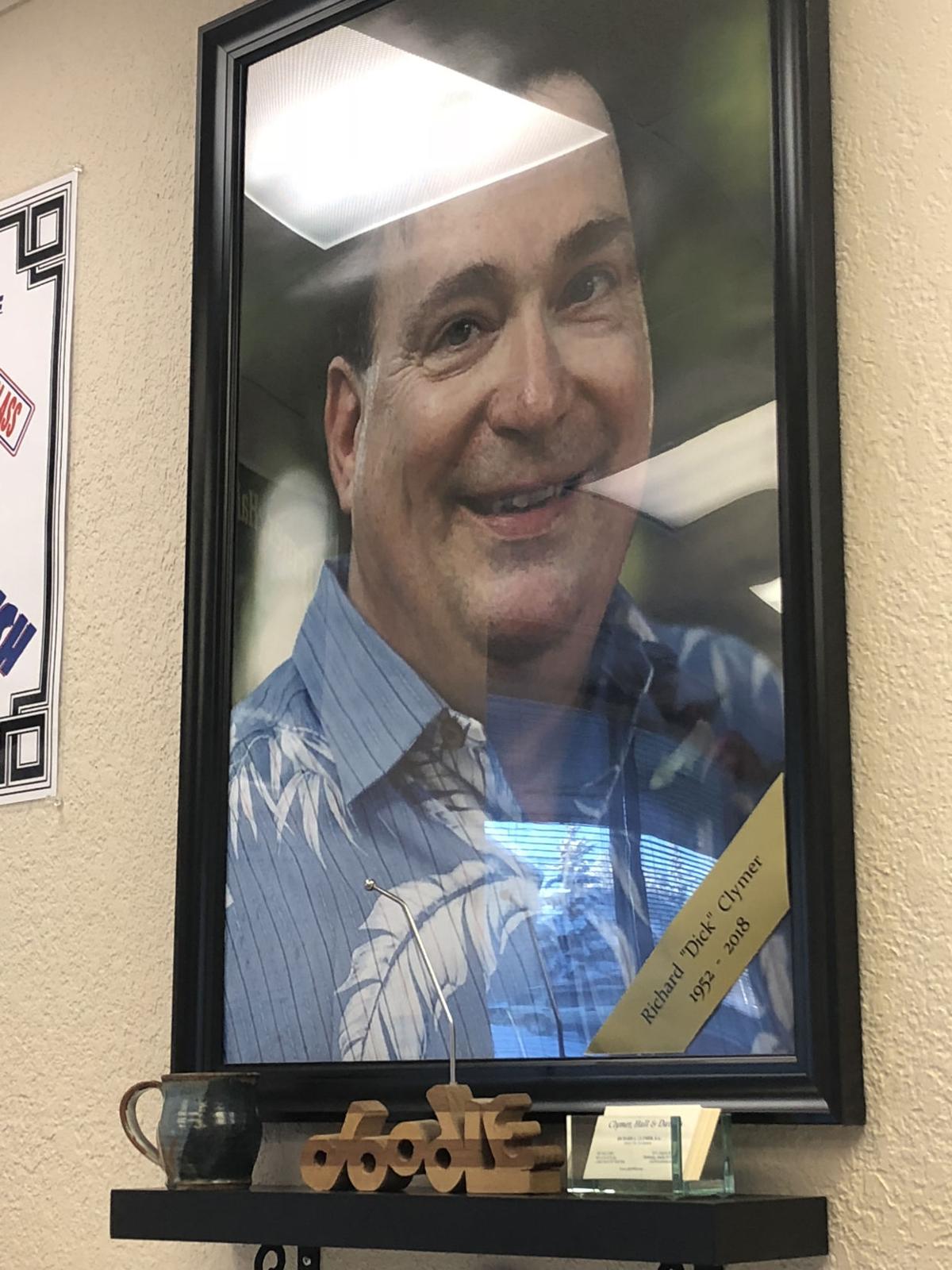 This portrait of Richard Clymer hangs behind the front desk at Clymer, Hall & Davis, in memory of the co-founder. Clymer passed away in 2018, but his business continues with the help of his wife and the company’s employees.

Stephanie Clymer, center, stands with the staff of Clymer, Hall & Davis in the tax preparation company’s lobby. Clymer inherited the business from her husband, Richard Clymer, who was one of the co-founders. The office has been based in this suite of Washington Plaza Mall since the 1990s.

This portrait of Richard Clymer hangs behind the front desk at Clymer, Hall & Davis, in memory of the co-founder. Clymer passed away in 2018, but his business continues with the help of his wife and the company’s employees.

To give Clymer, Hall & Davis a call for help with all the paperwork for the upcoming tax season, all you need to do is remember your 1040 tax form.

“At that time we still had the phone ringing in the house and at the office,” said Stephanie, “and middle of the night phone calls were very interesting to say the least, but the 1040 we’ve been trying to educate people so they know the form, because we’re so used to saying it.”

She said they’ll be doing a campaign with it for this year, to get people to recognize both the form and their phone number.

Tax season begins later this month and leads up to the deadline to file tax returns on April 15. Stephanie’s advice for people and businesses looking to file their tax returns changes from person to person.

“It is on a case-by-case basis ... Everybody’s is a little different, so you can’t just give out blanket advice short of, keep your records,” she said.

Make sure to keep track of everything and have everything to file, Stephanie said.

People can come into the business seven days a week, although they don’t make appointments on Thursdays or Sundays, according to Stephanie. They do take drop-ins, so people can stop by and see if they can meet their usual tax preparer or another one if they’re flexible.

“People are pretty monogamous when it comes to their preparer,” she said. “It’s somebody they know, it’s somebody they’ve talked to for quite some time, knows their history. The preparers always write down notes. They see a lot of people during the season, but they remember them when they come back.”

Some people can find it little overwhelming to come in, according to Ann Kirk McGraw, an E.A., or enrolled agent, as well as general manager and tax account with Clymer, Hall & Davis

“What I would tell people is just to do the best you can and get the most you can together,” she said, “and come in, and then we’re able to help guide you into compiling the rest of it.”

She said she loves the job because it’s a way they get to help people.

“We’ll get new clients in here who have done their own taxes for years and they spend maybe an entire day or weeks putting their tax return information together, going through the home programs, doing it on paper,” she said, “where we can just sit down. We do it generally within an hour and they’re done, and they don’t have to worry about it anymore and I just absolutely love helping people in that way and taking that stress off of their shoulders.”

The business takes appointments and walk-ins. Some clients even mail, fax or fly their information in from villages. Whenever someone comes in, Kirk McGraw said, they’re greeted by the front desk, then brought to preparers to go over all their tax documents.

They talk about different life circumstances that might lead to deductions, like if a client has a child going to college. Generally, she said, they go through the tax return with the client while they’re sitting there to show them income, deductions and possibly even talk about tax planning for the next year.

Everything is scanned and stored electronically with the company, so the tax preparer is able to review a client’s information when they come in from year to year.

Born and raised Fairbanks, Kirk McGraw gets to see a lot of people she’s grown up around.

“That’s one of the things that we really love here and just having our office here instead of a bunch of different offices or nationwide, we really enjoy working in our community and working with local businesses and local people,” she said, “and seeing our clients come back from year to year as their families grow and change or as they grow and change. It’s really neat.”

The original company office was on Geraghty, then the company operated out of a building on College Road for around a decade. It’s been in the Washington Plaza Mall off Airport Way since the 1990s.

“We’ve been in several locations, but we’ve been in this mall for I believe 25 years,” she said.

The tax preparation company has been in the city since the 1970s, when Richard Clymer and Marvin Hall opened the office in August 1977. The two men went to college together and went to work for an accounting firm in Seattle while still in college.

The duo graduated in 1975, and by 1977 they had clients in Fairbanks and Anchorage. Hall took the Anchorage business, Clymer took the one in Fairbanks, and they split the Seattle office. Originally, the business was an accounting firm; it’s narrowed down to focus on tax preparation over the decades.

Stephanie met Richard and Hall the same year the business opened. When Hall left the company, she bought into it, and she and Richard married in 1980. Hall returned the year afterward and bought Stephanie out, but she stayed on, preparing taxes and helping clients with accounting in house.

The “Davis” in Clymer, Hall & Davis comes to the company by way of Palo Alto, California, where Gary Davis, another classmate of theirs, ended up working out of an office with them, according to Stephanie.

Davis and Hall retired from the business in the last decade. Richard Clymer passed away in 2018, at which point Stephanie inherited the company.

The staff, she said, were incredibly supportive and kept things going in the time leading up to and after his death.

It wasn’t just the staff either. At her husband’s celebration of life, clients showed up, some going back to the early 1980s.

“I was overwhelmed with the outpouring from his clients, all the cards, the condolence cards and the people that came to his celebration of life. It’s hard to go on, but life goes on and that’s what he would’ve wanted. So, as he would say, ‘Party on, Garth,’” Stephanie said, quoting “Wayne’s World.”

Richard Clymer hasn’t left them entirely, either. The company co-founder grins at every client who comes through the office from his portrait, which hangs behind the front desk, accompanied by some of the items from his office.