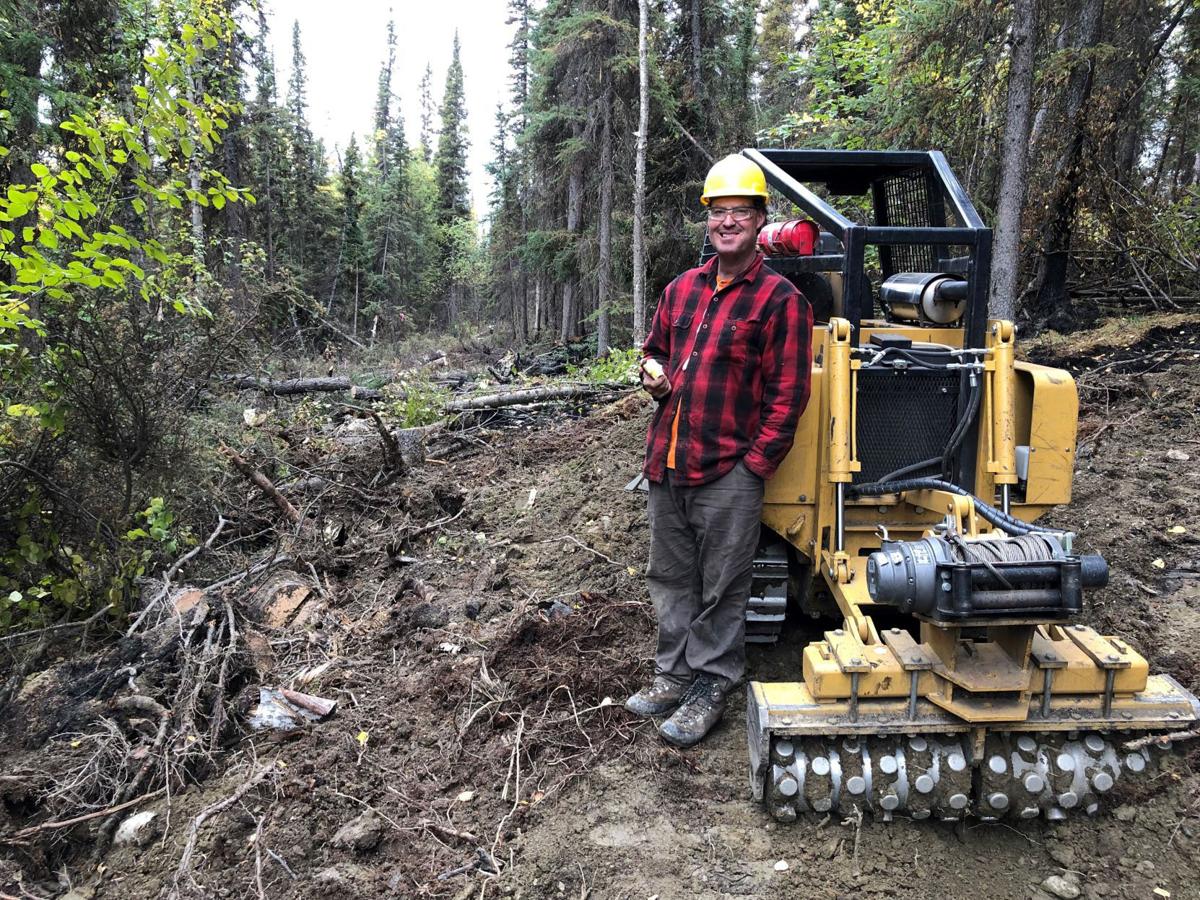 Jon Underwood, owner of Happy Trails Inc, was contracted to build the Mastodon Trail, photographed above. He and his crew were thrown a number of curveballs during the build, which ended up taking nearly six years to finish. 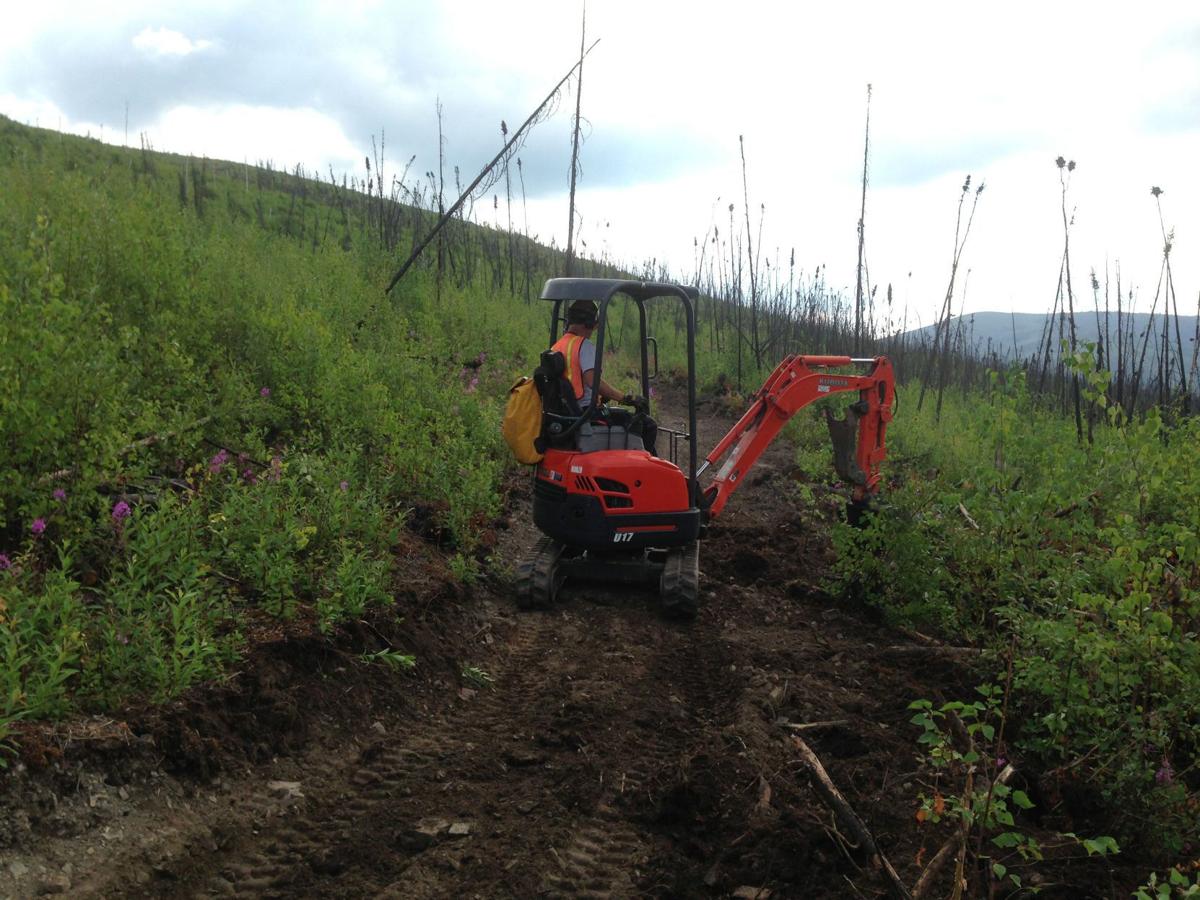 Jon Underwood, owner of Happy Trails Inc, was contracted to build the Mastodon Trail, photographed above. He and his crew were thrown a number of curveballs during the build, which ended up taking nearly six years to finish.

Jon Underwood, owner and operator of Happy Trails Inc., is first and foremost an outdoors enthusiast. His trail construction company is the contractor for an upcoming state Division of Forestry project in the Rosie Creek area. When asked about it, some of Underwood’s initial comments were about how great the area is from a trail user’s point of view.

“My involvement began last fall. Alison Arians contacted me and I talked to some other trails folks around here and became interested in it. I ended up going out there with her,” Underwood said. “I hadn’t actually been out there in probably 20 years or more. I was just blown away by how nice those trails and roads are and how nice the forest is out there.”

Underwood then went on a brief tangent to discuss some of the experimental forestry work that’s taking place in the area, including the growing of pine trees and larch, before he got to describing the work with which he’s been tasked.

“Some of those roads are rough and need drainage work,” he said. “But some of them are in terrific shape and give views out into the Tanana Valley out toward the Alaska Range. It’s a wonderful place and it’s really quite close to Fairbanks.

“So I got pretty excited about it,” he added.

This project, in the Tanana Valley State Forest, marks Underwood’s first time working with the state Division of Forestry, but his resume is varied and lengthy. Over the roughly 15 years that Happy Trail Inc. has been in business, he’s had numerous contracts with Alaska State Parks and various municipalities and boroughs — not least in the Fairbanks area.

“The Compeau Trail crossed some forestry land,” he said. “That’s the first trail I ever built back in 2006.”

The primary aspect of the work he’s doing in the Rosie Creek area is the regrading and resurfacing of the entire 18-mile system of forestry roads in order to fix ruts and reduce erosion damage.

“A lot of it is regrading, but we need to integrate a fair amount of drainage into the roads themselves,” he said. “A lot of those roads were made for timber access and not with an eye for permanence.”

This involves building drainage into the roads to stop water flowing directly on their surface, which leads to erosion. While these are forestry roads, rather than trails, Underwood said they’re not unlike the ski trails he built on Birch Hill back in 2016.

“The way they’re built is very similar to trails where you’re not adding fill for the most part, you’re not using culverts unless it’s absolutely necessary; you’re just building a usable bench into the hillside and using the shape of the trail to drain water,” he said.

The work is due to start in September and should be finished by mid-October, depending on weather conditions.

Part of the aim of the project is to restore the roads to the point where they can be used for both hauling timber harvest and recreational uses. According to the division of forestry, the area likely won’t see another timber harvest for at least 20 years.

“They’re usable in the meantime for recreation. They should be excellent ATV trails,” Underwood said. “So that’s the challenge, building something that works for both of those uses.”

Origins of the business

Underwood said that the primary reason he started his business is that he’s been an avid trail user since he was 5 years old. He said he was somewhat precocious in his youth, which led a teacher to suggest he take up cross country skiing. He took to the sport with such fervor that he ended up on the Dartmouth College ski team and competed in a number of national championships.

Underwood is also a self-described “mountain bike nut.” He said that mountain bikers, perhaps more than any other trail user, have an “intense relationship” with trails.

“I rode everywhere, I loved mountain biking — still do,” he said. “Ironically, I’m too busy building trails to do it much these days.”

According to Underwood, trail construction had been on his mind for several years when, in the early 2000s, he came across an article about professional trail builders. Underwood was living in Fairbanks at the time.

“I’ve been quietly building the After Hours Trail up by my house, just on my own,” he said. “So I saw this article and I had thought ‘You’ve gotta be kidding me! You can get paid for this?”

In 2003, Underwood attended a professional trail building conference in Reno. Two years later he bought a dozer and started hunting for a contract. That happened to be the year that State Parks was looking to for a contractor to work on the Compeau Trail

“I had never run a piece of heavy equipment before, I just knew I wanted to do it and I loved trails,” Underwood said. “Luckily, State Parks was able to hire Mike Shields from Palmer, who happens to be a very good trail designer.

“He taught me probably half of everything I know about trail-building,” Underwood continued.

Underwood said he took his dozer out, scared himself half to death for a couple of weeks, but ultimately managed to complete what became a hugely popular trail.

“And it went from there,” he said. “Some years have been lean, some have been extremely busy.”

He’s since built trails all over the state, from Kodiak to Palmer to Talkeetna to Fairbanks. Underwood describes trail construction as a very specialized niche: “part civil engineering, part art.” He noted that trails have to be custom built for whatever the ground is like in the area.

“It’s knowing how to build the trail so it won’t destroy itself, which is sustainable trail building and design. But it’s also interrupting nature for users, interpreting the ground, designing and building an experience for people,” he said. “You have to be part psychologist and part artist and part hydrologist.”

A recent example of Underwood’s work is the Mastodon Trail, which was completed late last year after a decade of planning and building. In October 2019, Underwood told the News-Miner about the difficulties he and his three-man crew endured.

“It was a difficult trail in a number of ways. It had two major creek crossings and a minor one,” he said. “And there were a series of misfortunes that befell it. There was a fire that burned near there in 2013-14 and we had to move all of our equipment back because of that. The next time we tried to work on it, we had an unusually rainy summer and it was extremely wet.”

It was one of the most remote trails Underwood’s ever worked on, which led his crew to put up a spike camp around 8.5 miles into the trail and work from there for most of the project. The work was supposed to be completed in 2018, but winter came early, delaying work further. Then in 2019, the Nugget Creek Fire descended on the trail.

deadfall pretty much completely over the last 4-5 miles of the trail,” Underwood said. “We literally cut our way through that with chainsaws.

It took us five weeks to cut all the way through it.”

While Underwood was clambering over deadfall to re-mark the intended route, he noticed that the ground was wet, mossy and riddled with permafrost — less than ideal for non-motorized trail use. So Underwood went back to the drawing board, rerouting the trail in a way that extended it a couple of miles and elevated it to higher ground with better soils.

This is another busy year for Underwood. Not only is Happy Trails Inc. working on the forestry roads in the Rosie Creek Area, it’s been contracted by Alaska State Parks to work on repairs to some 44 miles of trails in the Chena River State Recreation Area.

“That is scheduled to happen in August mostly, maybe late July,” Underwood said. “And we are going to be regrading and just correcting drainage issues and all this kind of stuff for the Compeau Trail, the Angel Creek Hillside Trail and the Stiles Creek Trail.”

Both projects are being funded by Recreation Trail Program grants from the Department of Natural Resources. And that’s not all Underwood has coming up.

“There’s some pretty interesting projects coming over the horizon. We’re planning to build some bike parks — hopefully a fairly good sized one in Anchorage,” he said. “There are a fair amount of things that need to come together to fund that. But hopefully that will come up in 2021.”