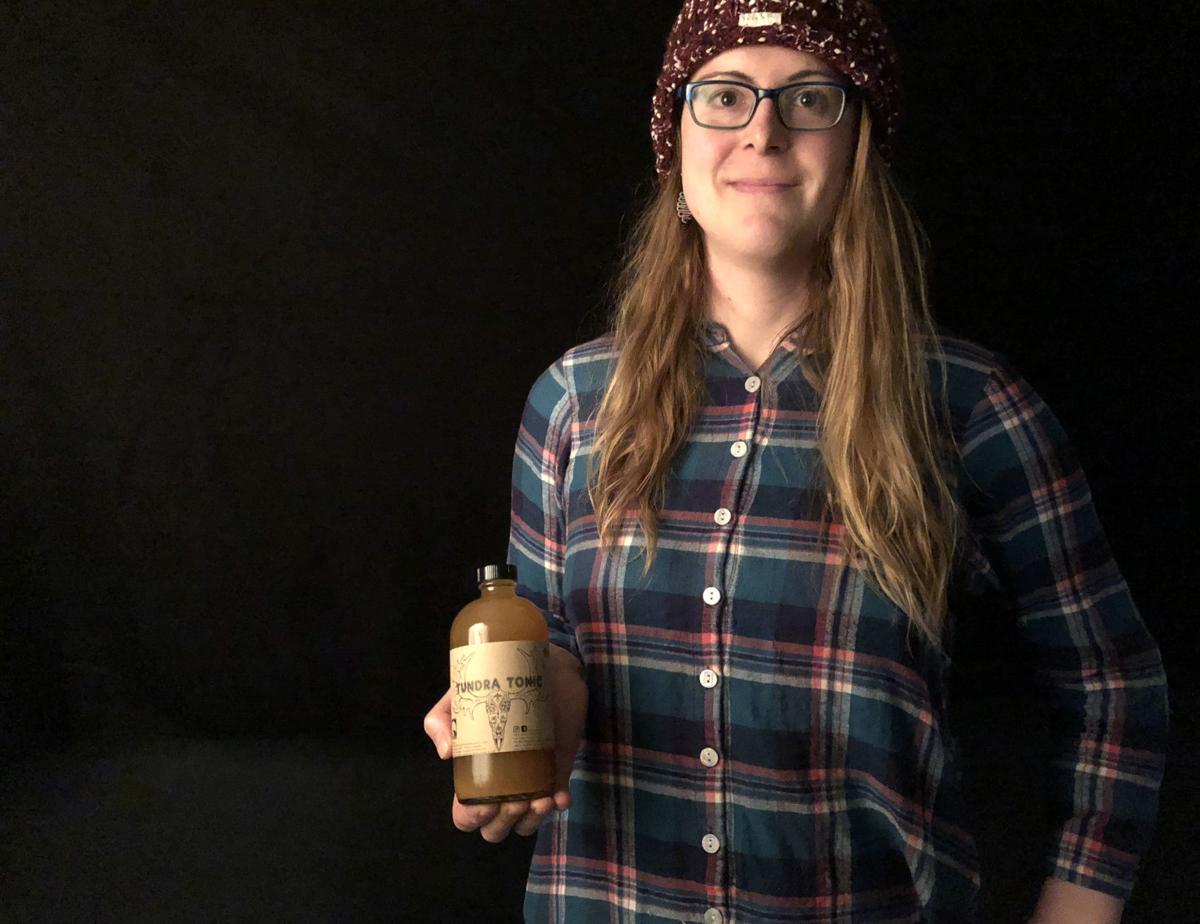 Homyna Curiel, owner and founder of Tundra Tonics, stands with a bottle of one of the tonics she sells. Peppers, spices and herbs go into apple cider vinegar for weeks to create these bottles of Tundra Tonics. 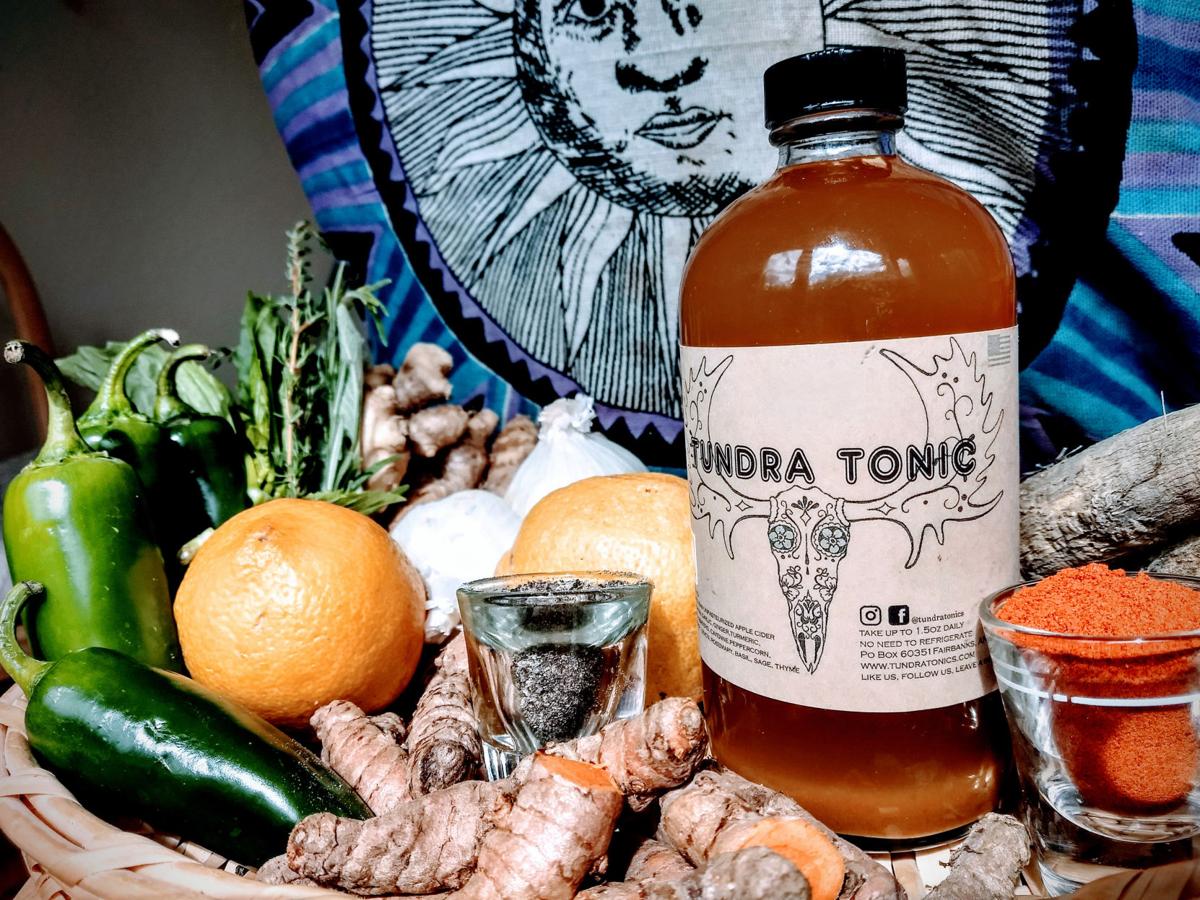 Homyna Curiel, owner and founder of Tundra Tonics, stands with a bottle of one of the tonics she sells. Peppers, spices and herbs go into apple cider vinegar for weeks to create these bottles of Tundra Tonics.

Tundra Tonics started in the Farmer’s Market and has made its way into stores, with the founder keeping the company’s foundation in local produce.

The tonics are created in small batches according to Homyna Curiel, owner and founder, and the company currently has four different recipes.

“It goes five weeks each batch and then you’re straining everything off and bottling,” she said, “and we use all glass bottles.”

The process is straightforward in that way, Curiel added.

“It’s a lot of waiting and a lot of timing getting this big shipments of produce and going around to all these different farms and collecting all these different ingredients,” she said. “It’s very smelly and spicy. You tend to smell like vinegar and 14 different vegetables everywhere you go for a few days.”

The company’s flagship product is fire tonic, the first product Curiel started making four years ago. It starts with raw apple cider vinegar (with the mother) and then it comes down to what you put into it.

“Many people have many different versions of these. Ours have 14 different ingredients and a lot of those ingredients are locals, all of them are fresh and whole,” she said. “So you take things like onion, and garlic, and peppers, and herbs and really spicy invigorating things that are kind of difficult to prep whole and raw — and you chop them all up and they go into the vinegar for five weeks.”

Since it’s so concentrated, according to Curiel, it really isn’t enough to call it an infused vinegar.

“So it is a culinary thing in one way because it’s very tasty,” Curiel said. “They all taste really good, but in another way this is something that you would take to help lower blood sugar and help to metabolize fats during a meal.”

Tonics have long been used as home remedies for various ailments. When Curiel talks with people who are wary of trying the product, she likes to have conversations with them about research she’s read on the topic.

There are different ways to eat the Tundra Tonics, or drink them, depending on preference. Although Curiel doesn’t advise drinking a whole bottle.

She’s had it with french fries and she says she’s even known people to dip their pizza crust in it.

“People put it on Caesar salads. People have put it in casseroles,” she said. “I mean, I’ve heard everything and anything. Marinades, it’s literally anything you want.”

When Curiel first heard about fire tonics, it was through a friend and she fell in love with it. Curiel said she never thought she could put anything she wanted in vinegar and reap the benefits of a whole bunch of different things all at once.

“So I started making some batches, just because I wanted to, and I started sharing them with friends,” Curiel said, “and it honestly started there.”

Everyone’s reactions were “really big” and Curiel said she felt really good about it.

At the same time, there was pressure in her life, according to Curiel, as she was approaching 30 years old and realizing that working for others besides yourself doesn’t always pay off and could be “unfair, a dead end and also unsafe.” She said she didn’t want to spend the rest of her life leaving her life in other people’s hands.

“I wanted to make a decision to use my full potential and also compromise as little as possible for the rest of my life,” she said. “So it’s really like a personal philosophy as much as it was a spontaneous opportunity.”

So she became her own boss. Now she said she can’t imagine doing anything else. Now, she noted the risk falls on her own shoulders, but she’s not limited doing things on her own like she would be working for other people.

The company works and breathes locally. Steve and Heather Brice, local artists and ice carvers, made the drawing for the bottle labels, which is based on Curiel’s concept. Her ingredients come from people who have also been vendors at the Farmer’s Market: farms, greenhouses and the Co-op.

Curiel said she would much rather invest her time and energy in the local region where she’s at.

“I want to be connected to the people, the soil, and the food and everything as much as possible that’s within reach,” she said, “and I think that’s valuable, not only for myself.”

She added that she thinks it’s valuable for everyone and that more of our social and commercial systems will eventually shift toward that attitude.

That doesn’t leave expansion off the table, though.

“It means a lot to me to show the world that you can achieve success on your own, with very little money, just working with your own hands and a true passion,” she said, “and I think there’s a dominating sense that the world is unfair and you can’t really have the rags to riches story, but I think you can — and I think you still can more than a lot of people understand.”

Curiel added that she wants to wave her flag and show everybody they can do more than they think they can.

She also said she wants to show the world that great, new, creative things are happening in Alaska and that there are passionate people in the state who want to innovate.

One of the newer products to come from Tundra Tonics are honey sticks in biodegradable PLA straws. The sticks include ingredients like tumeric and spruce tips.

Thus far the business has been growing. From friends, to the farmers market, to almost 20 stores after four years. Tundra Tonics is in the Co-op, both Sunshine Health Foods locations, Frostbite Foods and they’re in stores in Talkeetna and Palmer.

“And then we’re moving into some out of state stores too,” she said, “and there’s even been some offers to start exporting to Canada, which we are cautiously tip-toeing towards, but super excited about.”

Curiel said she’s not opposed to exporting to other countries as well, but she also really wants to focus on getting into some stores in the Lower 48.

People can find Tundra Tonics on Instagram at www.instagram.com/tundratonics or on Etsy at www.etsy.com/shop/TundraTonics