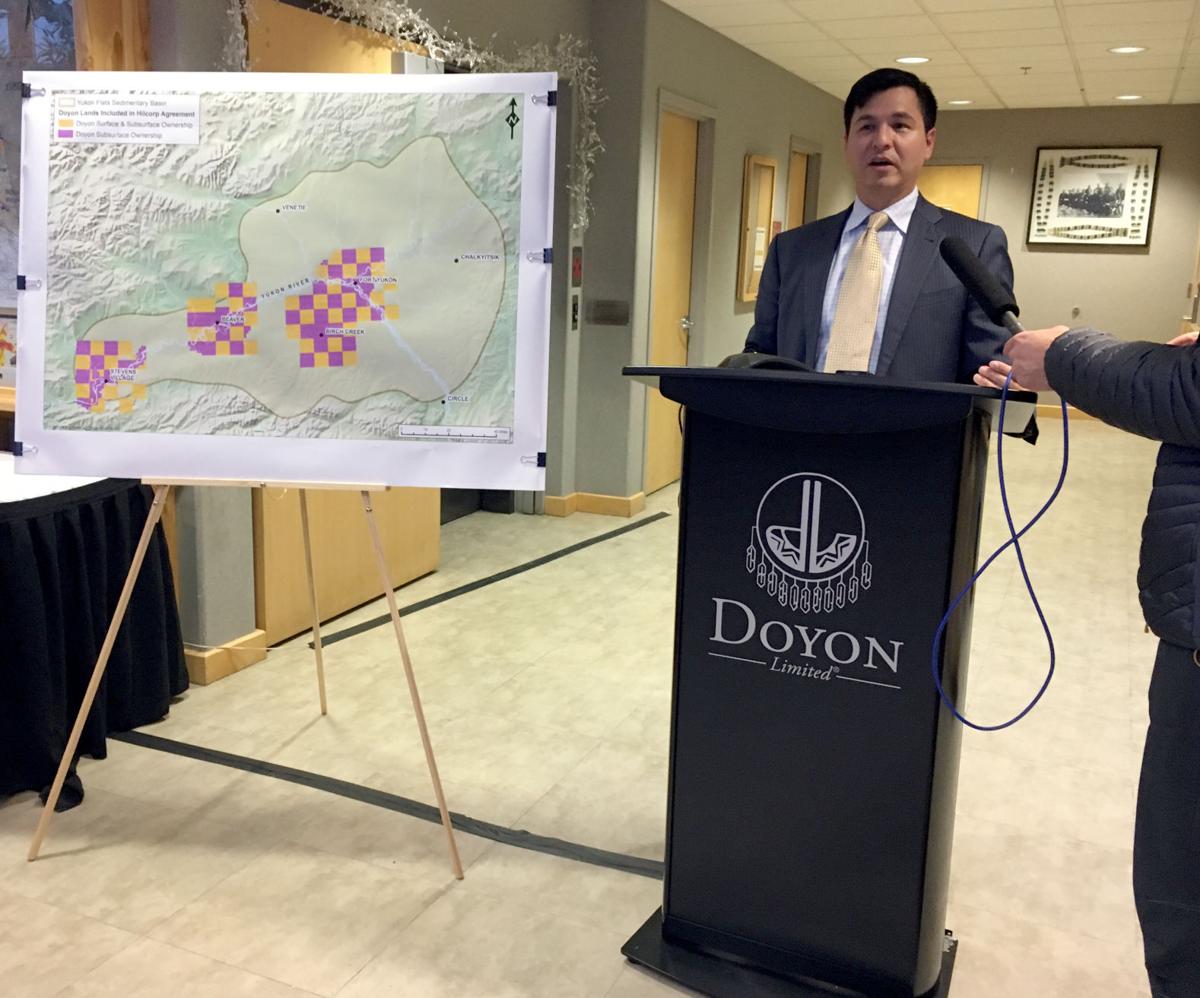 Aaron M. Schutt, president and CEO of Doyon, Limited, announces the corporation has entered into an agreement with Hilcorp for an oil and gas exploration project in the Yukon Flats on Monday, Dec. 9, in Doyon's Fairbanks headquarters. Julie Stricker/News-Miner 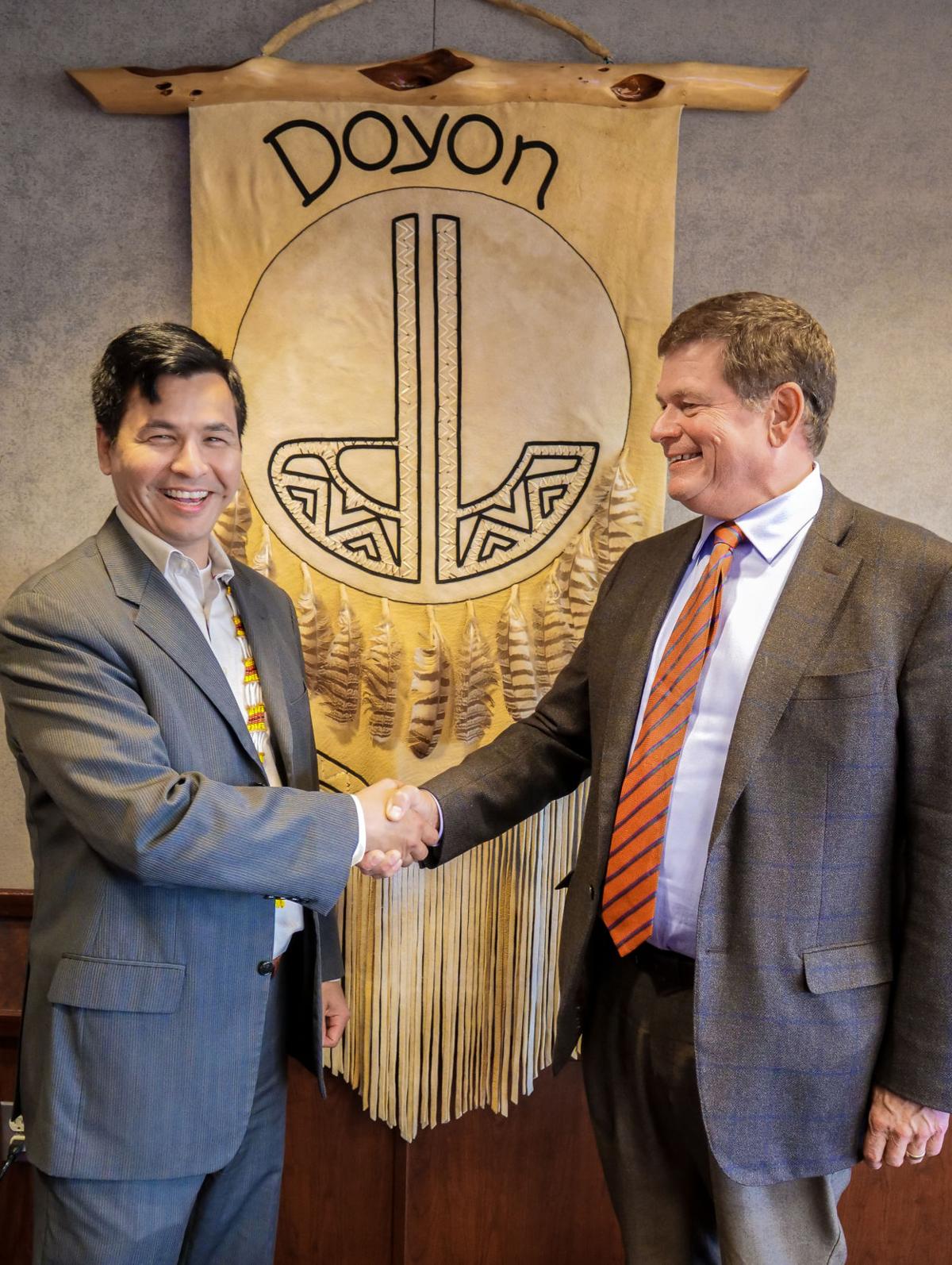 Aaron M. Schutt, president and CEO of Doyon, Limited, announces the corporation has entered into an agreement with Hilcorp for an oil and gas exploration project in the Yukon Flats on Monday, Dec. 9, in Doyon's Fairbanks headquarters. Julie Stricker/News-Miner

Doyon, Limited, announced Monday it has entered into an agreement with Hilcorp to explore 1.6 million acres of land in the Yukon Flats for oil and gas potential.

Aaron Schutt, Doyon president and CEO, said Doyon holds the mineral rights to the land, which is divided into four sections around the villages of Birch Creek, Fort Yukon, Beaver and Stevens Village. Much of the rest of the 10 million acres in the flats is owned by the federal government and administered as the Yukon Flats National Wildlife Refuge. The Yukon Flats is largely sedimentary, and its geology has drawn interest from oil and gas companies for decades, he said, although no wells have been drilled.

Doyon's holdings are centered in contiguous chunks of land around each of the four villages and was selected with both subsistence and resource development in mind soon after the corporation was formed in 1972 under the Alaska Native Claims Settlement Act, Schutt said. He acknowledged that balancing the two is difficult.

"What we have in place in our agreement with Hilcorp is our ability to talk to them about when and where their activities are, minimizing the amount of impact on the land as much as we can," he said at a news conference at Doyon's Fairbanks headquarters. "Certainly the peoples in those communities know their lands best."

Headquartered in Fairbanks, Doyon has more than 20,100 shareholders. It has subsidiaries in oilfield service, government contracting and tourism and is the largest private landowner in Alaska.

Hilcorp, a privately held company based in Texas, began operating in Alaska in 2012 and today is the largest private oil and gas operator in the state. It has holdings in the Cook Inlet gas fields and on the North Slope. In August, the company announced it had acquired BP's Alaska holdings for $5.6 billion. Doyon and Hilcorp signed the agreement in September.

“Our partnership with Doyon represents great opportunity for their shareholders and the state," said David Wilkins, senior vice president of Hilcorp Alaska, in a news release. "We have worked successfully with Doyon over the years both in the Cook Inlet and on the Slope. This agreement opens the door to continue that relationship in the Interior as well.”

Hilcorp plans to conduct an initial airborne gravity survey of the region and, depending on results, may follow up with seismic operations and drilling programs. The Birch Creek area, which comprises the deepest part of the Yukon Flats, will be the initial focus of the exploration, Schutt said. The initial agreement is for five years.

"We've waited a long time to have this agreement in place and we're excited to announce it," Schutt said.

Initially, Hilcorp's exploration activities will be airborne and have little surface impact on the region, but if development proceeds — "a big assumption," Schutt said — Doyon will hold community meetings to get feedback from residents.

"We know where the allotments are, but where do people have their traplines, where do people hunt and fish and gather. We'll try to work around those to minimize the impacts," Schutt said. Doyon has signed a cooperation agreement with Tihteet Aii, the village corporation for Birch Creek, to jointly pursue service contracts and for shareholder training if development occurs.

But the corporation's work as operators in Nenana-Minto has given it a lot of experience that Doyon plans to make use of in the Yukon Flats, especially when dealing with communities that may be affected by development, Schutt said. He will travel to Birch Creek and Fort Yukon this week to talk to residents about the agreement and get their feedback, Schutt said.

"We're pretty excited about Yukon Flats, but no one has drilled a well yet," he said.