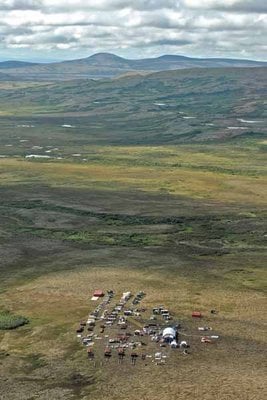 A remote supply yard for exploratory drill rigs sits on the Pebble Partnership deposit Monday, Aug. 2, 2010, in southwest Alaska. The prospect is one of the largest concentrations of copper, gold, molybdenum and silver in the world. It also sits in the middle of the watershed for the world's largest sockeye salmon fishery. / Sam Harrel/News-Miner 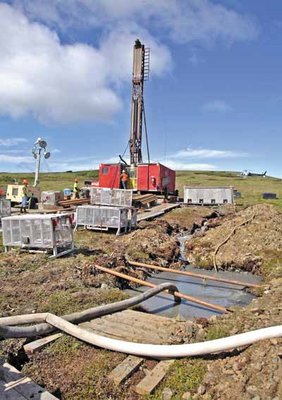 An exploratory drill operates Monday, Aug. 2, 2010, on the Pebble Partnership prospect. In an effort to avoid a lasting footprint, exploration has been done entirely via helicopter, with work crews and equipment hoisted throughout the deposit area. Wooden tundra pads are used at drill sites to support the equipment and diminish the surface impact. Site reclamation runs concurrent with exploration to minimize a lasting effect on the area. / Sam Harrel/News-Miner

A remote supply yard for exploratory drill rigs sits on the Pebble Partnership deposit Monday, Aug. 2, 2010, in southwest Alaska. The prospect is one of the largest concentrations of copper, gold, molybdenum and silver in the world. It also sits in the middle of the watershed for the world's largest sockeye salmon fishery. / Sam Harrel/News-Miner

An exploratory drill operates Monday, Aug. 2, 2010, on the Pebble Partnership prospect. In an effort to avoid a lasting footprint, exploration has been done entirely via helicopter, with work crews and equipment hoisted throughout the deposit area. Wooden tundra pads are used at drill sites to support the equipment and diminish the surface impact. Site reclamation runs concurrent with exploration to minimize a lasting effect on the area. / Sam Harrel/News-Miner

A leaked summary of the Pebble mine project's preliminary final environmental impact statement says U.S. Army Corps' of Engineers officials declined to model a tailings dam failure at the mine because of the designs chosen by the company but mine opponents contend that's simply unacceptable.

The executive summary of Pebble's preliminary final EIS — which was sent to some Bristol Bay-area tribes as well as state and federal government organizations acting as "cooperating agencies" to provide input on the final document prior to its release — states that the modeling of an "extremely unlikely" tailings release was deemed inappropriate by the Corps due to Pebble's use of a flow-through tailings dam design, which is fundamentally different than major tailings dams that have failed around the world in recent years.

Pebble CEO Tom Collier said in a formal statement issued shortly after the typically confidential summary was released that criticism of the Corps' review is rhetoric that ignores what happened during review of the draft EIS, which was published about a year ago. Pebble has interpreted the leaked summary as indicative of a favorable permitting conclusion for the project.

"Just because some of the groups opposed to Pebble do not like the conclusions reached by the USACE (Corps) does not that the USACE's work is not valid," Collier said. "Rather, the USACE's work on this issue is sound. It is defensible and it should be commended for its completeness."

Commercial fishing and conservation groups have criticized the entirety of the summary, and argue that the tailings dam issue is just another symptom of a rushed and incomplete EIS process.

According to the summary, a not-yet-published appendix to the full, final EIS details the rationale behind the probability of a large-scale tailings dam release from the bulk tailings storage facility, or TSF.

That appendix addresses several recent dam failures, such as those in Brazil and the 2014 Mount Polley dam failure in British Columbia, and discusses "the higher probability of failure of water-inundated tailings slurries behind upstream dams compared to drained, thickened tailings behind downstream/centerline dams."

Corps Alaska officials have said in prior interviews that a detailed analysis of the tailings facilities is outside the scope of their review, noting the State of Alaska is responsible for reviewing permitting for the specific tailings dams designs and construction through its Dam Safety Program administered by the Department of Natural Resources.

Pebble has yet to apply for its state dam permits.

The company plans to build a centerline-style dam for its bulk TSF that will allow water to pass through the dam and subsequently be collected below the embankment for storage and treatment before it is released back into the environment.

Pebble Permitting Vice President James Fueg said the company specifically examined what has happened during TSF failures around the world while designing its facilities.

The January 2019 collapse of an iron ore mine tailings dam near the Brazil city of Brumadinho released a mass of tailings sludge and killed 270 people. It was preceded by another large-scale tailings dam failure in the country in 2015.

Pebble leaders first point to the fact that they plan to build two, separate tailings facilities: one to store the benign waste rock that makes up the lion's share of the finely ground mine waste, or tailings, and another that will hold the pyritic tailings, or those that can generate acid when exposed to air and water.

The main bulk TSF dam will be 600 feet high and the pyritic tailings embankment will be approximately 250 feet high, according to Pebble's permit application materials. Combined, the facilities will cover more than 3,800 acres.

Fueg said the large, bulk TSF will hold 85 percent to 90 percent of the waste that is left over from the mining process and the focus there is simply building the most stable facility possible. Part of that is allowing water to flow through the dam itself, rather than allowing the water to build up behind the dam and become a static force that is constantly pushing on the upstream face of the dam, according to Fueg.

Part of the problem at Mount Polley was that water breached the dam prior to its collapse; removing water helps stabilize the associated tailings. Separating the water and tailings reduces the already slim risk of a dam failure and also limits the impact if a failure does occur, he said.

Pebble's pyritic, or potentially acid-generating waste rock will be stored in water behind a separate, downstream-style tailings dam in a lined-facility while the mine is active. The pyritic tailings will be moved from the storage facility and into the bottom of the roughly 1,500 feet deep mine pit at the end of the mine's 20-year life. The pyritic tailings will again be covered with water as the pit naturally fills and will safely remain there after closure and reclamation, according to the company.

Fueg said Pebble will be mining rock specifically for the tailings dams rather than utilizing tailings and waste rock to build the dams, as is often done at other mines.

He added that the downstream slope of the bulk TSF will be very gradual, with a 2.6-to-1 slope.

"Ours is a much flatter slope, which again increases stability and the factor of safety in the design," Fueg said.

Finally, Pebble will dig down to bedrock before building the dam to prevent a potential weak layer of soil from compromising the dam from below, as also happened at Mount Polley, Fueg said.

The whole system hinges on the ability to treat lots of water in an already wet place, which Fueg acknowledged, but he said Pebble has designed its two large water treatment plants to handle the combination of a large storm during the peak of snow runoff in the midst of the wettest 20-year period in the 76 years of weather records available for the nearby Iliamna Airport.

"Half of the overall (water management) capacity is simply there as a precaution to deal with flood events or a series of wet years. It's a massive pond," he said.

Alaska Dam Safety Program Engineer Charlie Cobb declined to discuss the specifics of Pebble's TSF designs because he could eventually be tasked with adjudicating them in the state's permitting process. Cobb did note that Pebble's tailings dams would be among the largest in the state.

He said generally, though, that evaluating the failure risk of a given tailings dam against those that have failed is problematic because the design of each structure is extremely site and material specific.

"The rates of failure in the tailings dam industry are based on a whole fruit basket of dams. When one goes bad now and then it's like, 'OK, what kind of fruit was that?'" Cobb said.

More often, he said the failure risk is vetted through a Failure Modes and Effects Analysis by a group of engineers that search for weak spots in a design in a back-and-forth exercise until the design is sufficiently reinforced.

However, Dave Chambers, an engineer and geophysicist who founded the Montana-based nonprofit Center for Science in Public Participation said Pebble's tailings management plans were developed to save money and do not jive with the reality of the mine or the available mineral resource.

Chambers counters the claim that the flow-through bulk TSF will reduce the risk of failure with the contention that allowing the dam to fill with water from the inside could actually add to the risk.

"You don't want the dam to ever become saturated. When you allow a dam to get saturated you can have static failures," he said.

According to Chambers, many modern tailings dams are built with a thick internal layer of clay or other impermeable material that prevents water flow. Instead, the water is directed to a drain at the toe of the dam and is subsequently routed to the water treatment pond.

He said the flow-through design inherently allows some saturation of the dam material and while water is not supposed to build up behind the dam, it could and is a scenario that needs to be modeled.

"To my mind, flow-through dams aren't as safe as a more conventional flow-through dam with a barrier in it because that (barrier) gives you another check on controlling the saturation of the dam," Chambers said.

The company went with the flow-through design to avoid the added cost of designing and building the dam with the internal barrier, he argues.

"A permeable dam is just adding basically a second drainage system that shouldn't be required," he said.

That's because he doesn't believe Pebble will ever end up dumping the pyritic tailings in the bottom of the pit. Doing so would preclude expansion of the mine beyond the current plan, which many observers believe is necessary to make the overall project economic.

He called the proposal a "lawyer's mine plan."

He expects Pebble to build a second, larger pyritic TSF once they move ahead with expanding the project.

In response to the assertion that Pebble will expand the project, Pebble spokesman Mike Heatwole wrote that the current plan calls for putting the pyritic tailings back into the pit and the company believes that the proposal is a significant improvement to its closure plan. He noted that any further development plans would require a wholly new permitting process.