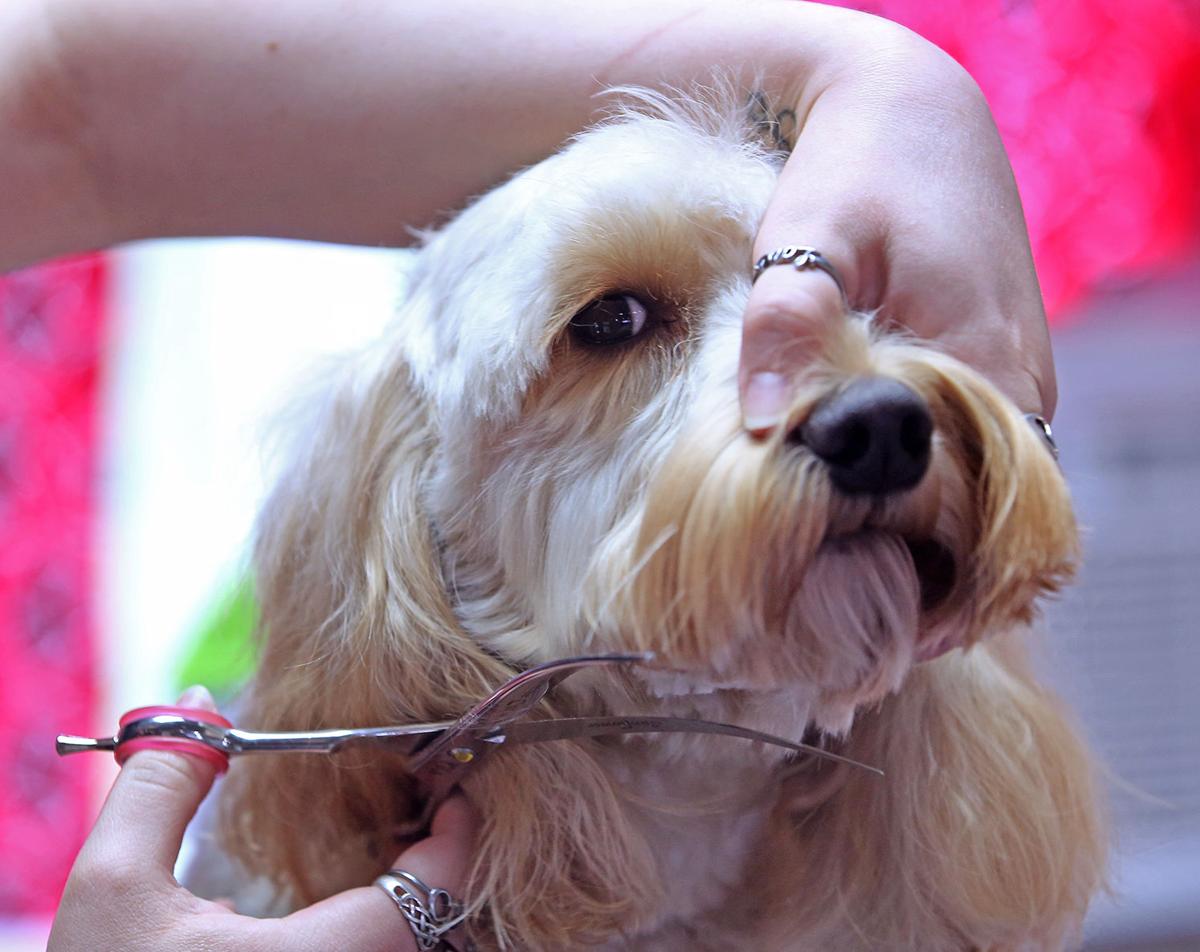 Bianca Jones, owner and operator of Studio K9 dog grooming service, trims the muzzle of Tinkerbell, a mini-doodle who is a regular customer, Thursday afternoon, June 28, 2018. 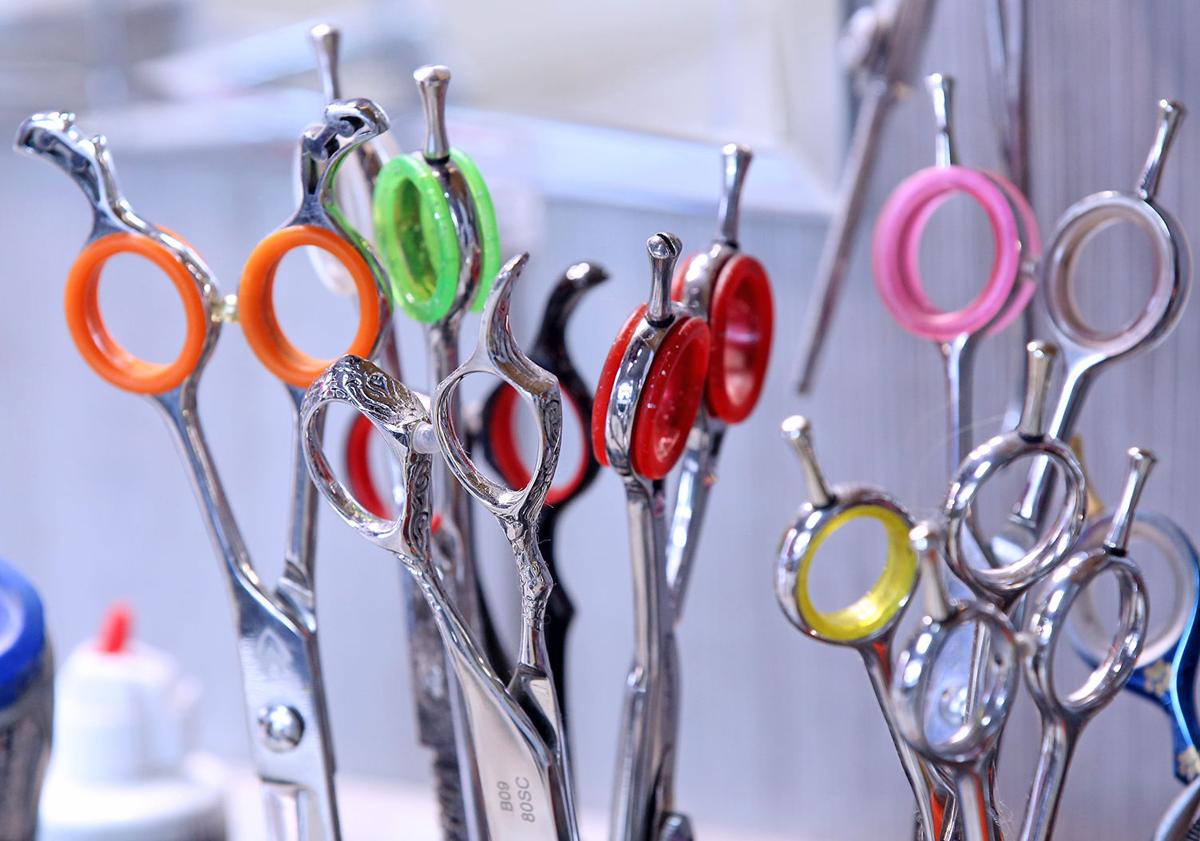 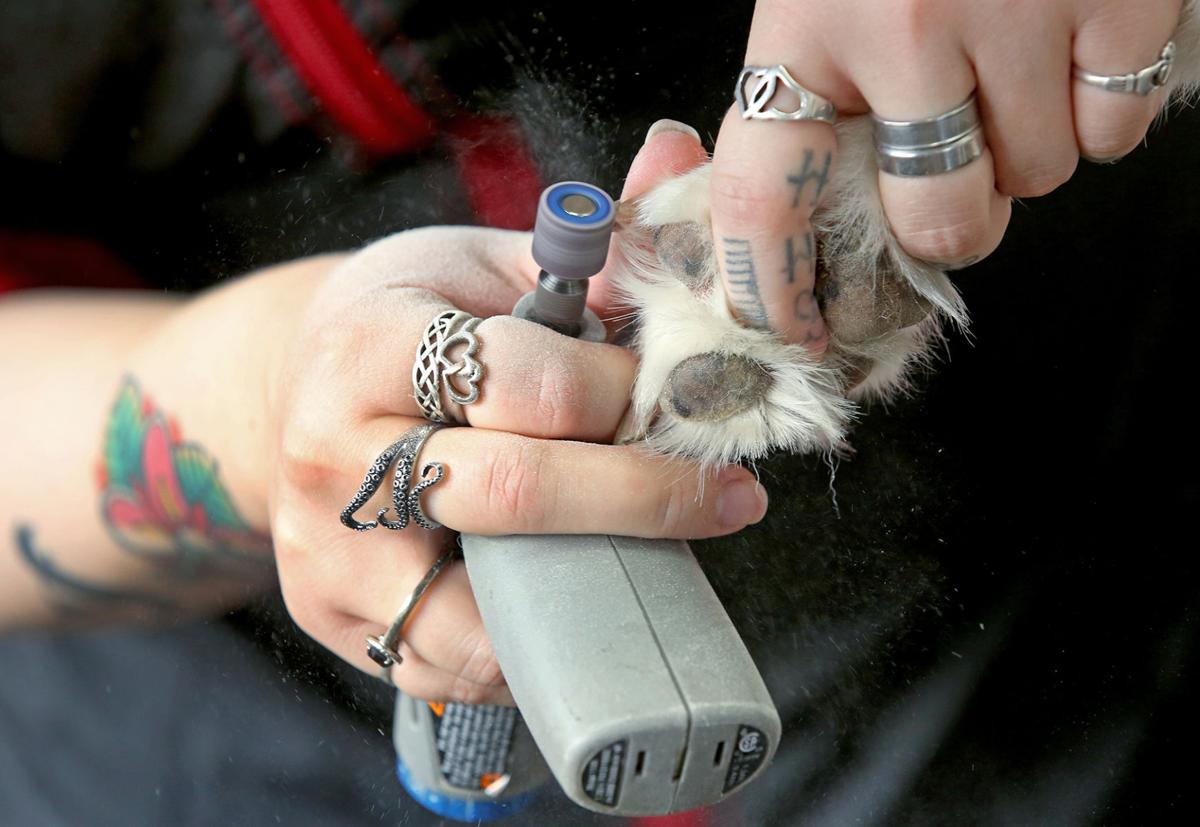 Bianca Jones, owner and operator of Studio K9 dog grooming service, uses a Dremel tool to trim the nails of Marley Ann, a husky who is a regular customer, Thursday afternoon, June 28, 2018. 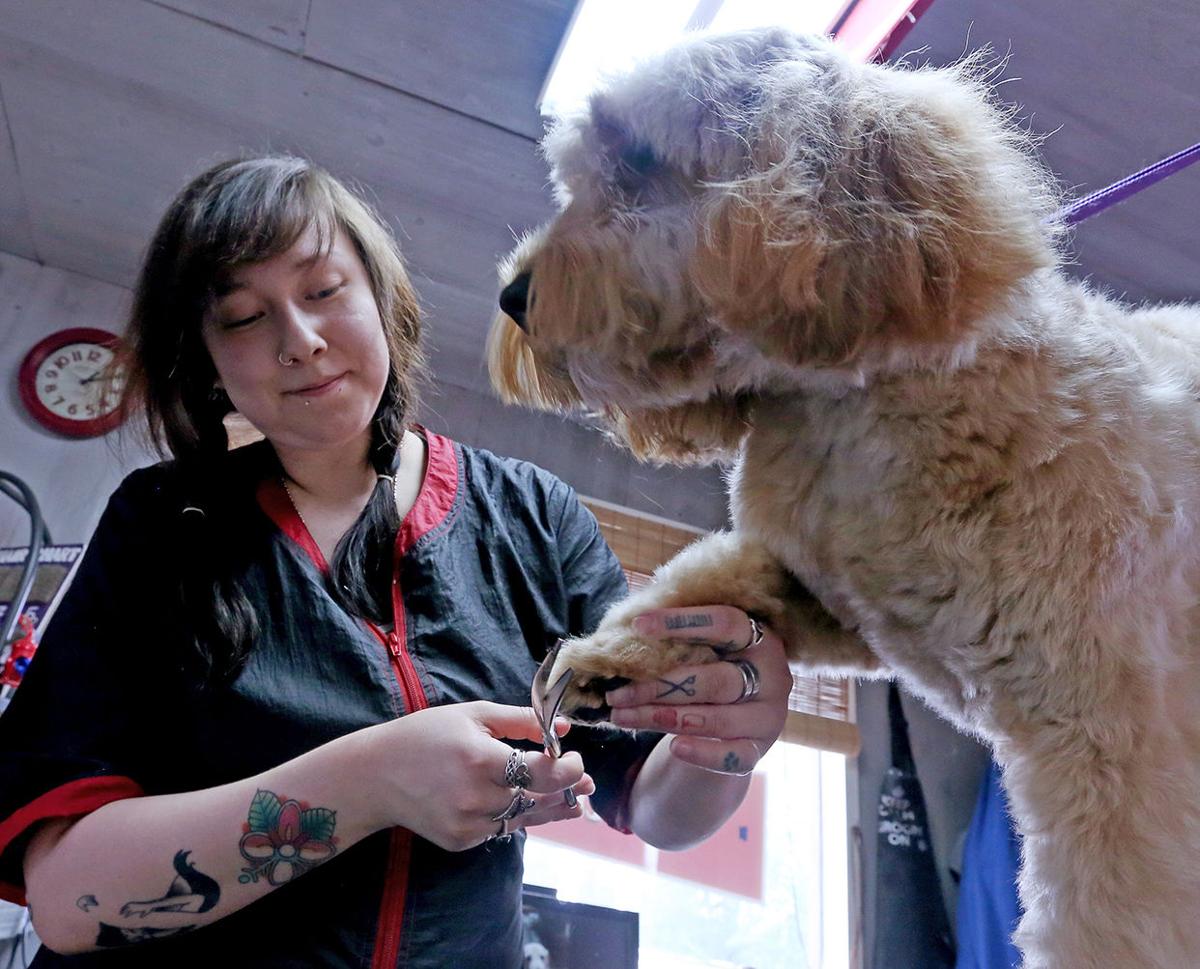 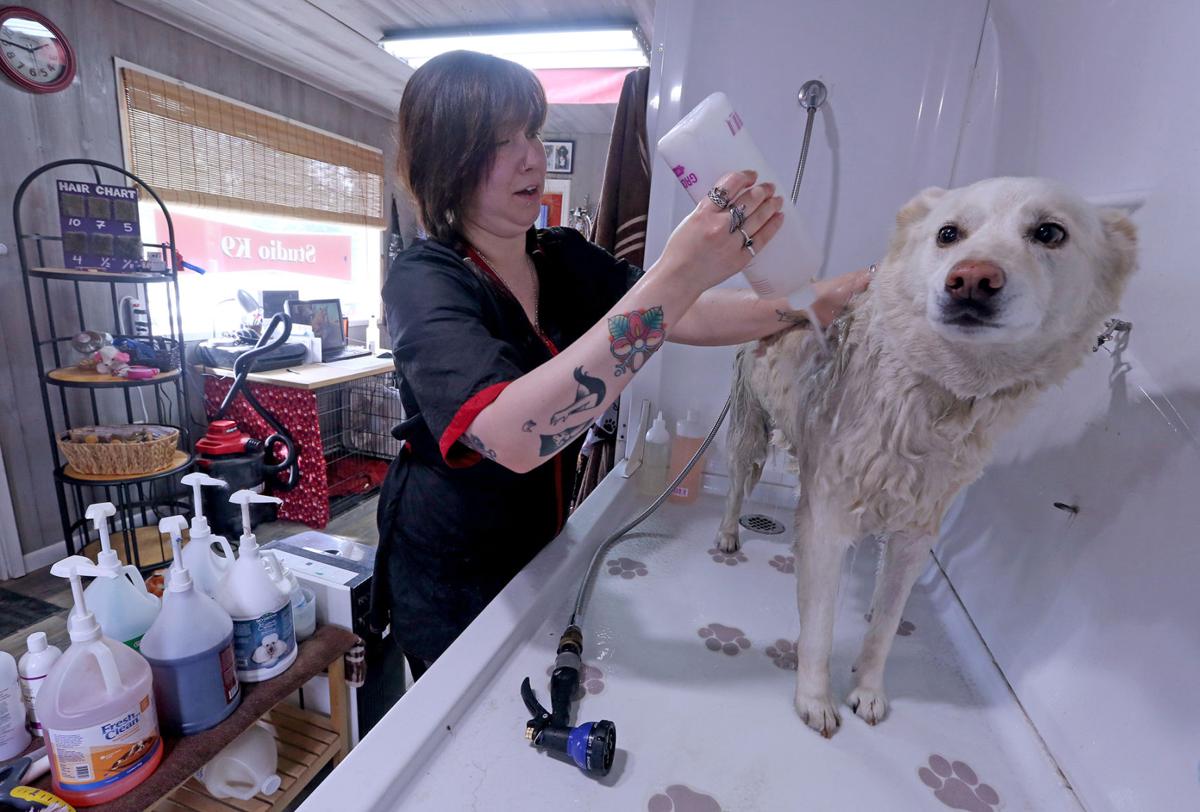 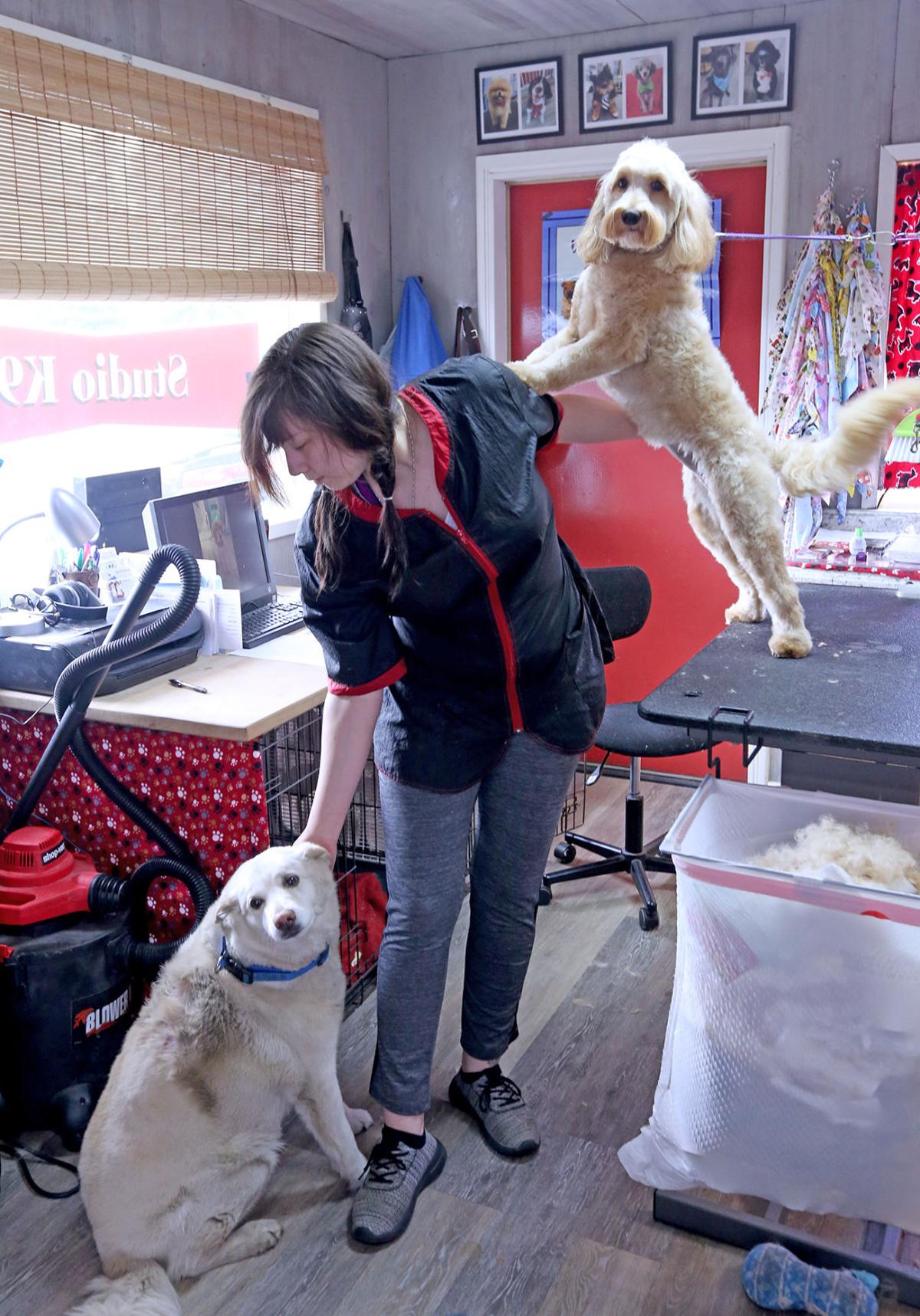 Bianca Jones, owner and operator of Studio K9 dog grooming service, trims the muzzle of Tinkerbell, a mini-doodle who is a regular customer, Thursday afternoon, June 28, 2018.

Bianca Jones, owner and operator of Studio K9 dog grooming service, uses a Dremel tool to trim the nails of Marley Ann, a husky who is a regular customer, Thursday afternoon, June 28, 2018.

FAIRBANKS — A lot of pet owners will attest to the fact that choosing a dog groomer is similar to choosing a hairdresser: It often takes trial and error, but once you find a good one, you don’t ever want to lose him or her.

Bianca Jones took that maxim to heart when she decided to open her own grooming salon. After six years of working for several grooming businesses and earning a loyal clientele, Jones opened Studio K9 almost two years ago. Operating out of a small cabin tucked away on a side road at the southern end of Peger Road, Jones works six days a week and is booked more than a month in advance. In fact, business is so good that Jones sometimes has to turn customers away and recommend they go to another groomer.

“I get a little upset when I have to turn people down, especially my regulars. I try to be available as much as possible, but I also have to keep that peace between my personal life and work,” Jones said Thursday afternoon as she worked on a talkative miniature goldendoodle named Tinkerbell.

Serendipity leads to a career

Jones was born and raised in Fairbanks and moved to Houston, Texas, with her mom after graduating from Lathrop High School. Unsure of what she wanted to do with her life, Jones “just put out applications wherever I could,” until someone decided to hire her. As luck would have it, PetSmart offered her a job as an apprentice groomer. The rest, as they say, was history.

“I had been watching all the groomers, and after about eight months, I said, ‘Yeah, that’s what I want to do. That looks really cool,’” Jones said.

Jones was still just bathing dogs and trimming their toenails when she moved back to Fairbanks and took a job at Petco. She entered its apprenticeship program and learned the basics of grooming, but left after three years to work freelance out of a friend’s grooming salon. A year later, she moved to Lucky Dog Grooming, and a year after that got the opportunity to open her own place when a family friend offered her the use of a small cabin next to his shop.

“He originally had the place for a family member to live in while watching the property. That relative moved out and Mike called me and said, ‘I have this cabin. I know it’s not very big, but do you want to work in it?’ Ever since I saw it, I knew I wanted to work in here. It’s perfect,” Jones said.

Jones didn’t have to do much to the place besides building a raised dog washing tub and stocking up on towels, shampoo and grooming equipment. Not wanting to foster bad blood by taking her former clients with her, she “encouraged” them to find her via word of mouth, a Facebook page and a website she built herself.

And, find her they did. While she tries to keep standard 9-to-5 hours, the length of her day depends a lot on what kind of dogs she has scheduled. For instance, a badly matted and dirty shih tzu that hasn’t been to the groomer in a year will take a lot longer than a miniature schnauzer that gets a bath and a trim every six weeks.

To take care of the growing demand, Jones eventually hired a groomer to work nights and on the one day a week Jones has off. That lasted for several months but ended when the woman’s other commitments made it impossible for her to work. Jones isn’t planning on replacing her because it doesn’t fit with her vision.

“I have a lot of clients who say, ‘You should get more groomers in here,’ but I’m very happy with the size. It’s perfect for just me,” Jones said. “It would ruin the entire environment I’m trying to create here, where it’s calm, collected and under control. When you have a lot going on, accidents can happen.”

Jones said she’s also hesitant to hire another groomer because it’s hard to find someone whose work she likes and can trust.

“I have very high standards. I wouldn’t have been able open this place if I didn’t,” Jones said.

Jones said she always keeps in mind that “I’m working with sharp objects around live animals,” and strives to give her clients an experience that is “more ‘Edward Scissorhands’ than ‘Sweeney Todd.’”

“Yesterday, I groomed a poodle who went to one of the other shops. The dog had cuts all over her body, and I felt bad because the dog didn’t act the same as she did the other two times I had groomed her.”

Jones said some dogs are easier to groom than others, but a successful, trauma-free grooming comes down to how the groomer relates to the dog.

“A lot of owners tell me their dogs strut after grooming, because the know they’re pretty and they know they’re clean.”